The thrill of acceleration has no equal. Like taking that first roller coaster ride as a youth, where the rush of acceleration pumps your veins full of adrenaline until the right ends. When you exit the ride, you run back to the end of the line, anxious to go another round. Gideon Chamdi was probably just like that in his younger years, and the competitive drive that motivates him probably saw him race friends back to the end of the line too. Chamdi, whose family emigrated from Israel to the USA in the mid 1980s, enlisted in the Israeli Defense Force for several years in the 90s before returning to civilian life in America. He was living on Maui and working as a server when his brother, a diamond wholesaler, asked him to learn the business and help with the company. After working with his brother for 15 years, Chamdi decided to start his own diamond wholesale business online, known as Diamonds by Wire. Text by Richard Fong // Photos by Rob Shaw 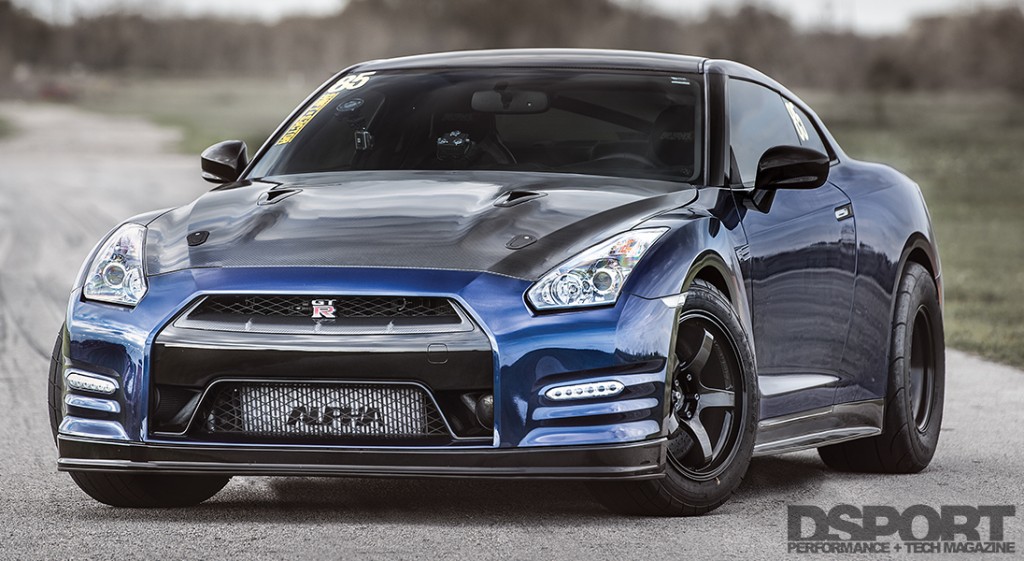 It Just Takes a Spark 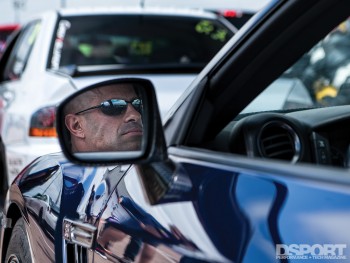 Chamdi initially had a limited knowledge of cars but enjoyed the performance of his daily driven BMW M3. One day, he was casually reading about the latest sportscars. After learning about Nissan’s R35 GT-R, its heritage and the improvements implemented in the DBA-R35 chassis (2012-present), he was sold. Shortly after purchasing his GT-R in March of 2012, Chamdi saw an advertisement for a Shift S3ctor track day. Showing up to the event in his stock GT-R with an aftermarket exhaust and 21-inch wheels, he excitedly prepared for his first experience on the track. Jason from Shift S3ctor was his driving instructor that day, coaching Chamdi during each session on track. Toward the end of the day, there was a straight-line race between four cars, Chamdi’s GT-R being one of them. He ended up beating the other three competitors and solidified his new interest in drag racing. Although he needed more seat time and modifications, his quickly developed passion for raw acceleration and speed took off like a wild fire.

Chamdi admits that he’s an impossibly competitive person, and he wasn’t about to return to another track event without being prepared for racing. He did some research and was drawn in by the Alpha upgrade packages developed by AMS Performance. The nearest authorized Alpha tuner he could access was ACG Automotive in San Diego, California. He brought the GT-R to have an Alpha 10 package installed. With 1,000 horsepower at his disposal, Chamdi was ready for the next event, the Air Strip Attack. He won at that event and over the course of the next two years, would upgrade the GT-R whenever possible in preparation for each successive race. In the process, he became good friends with the organizers at Shift S3ctor and even invested in the series with Diamonds by Wire as the title sponsor at several of the events. 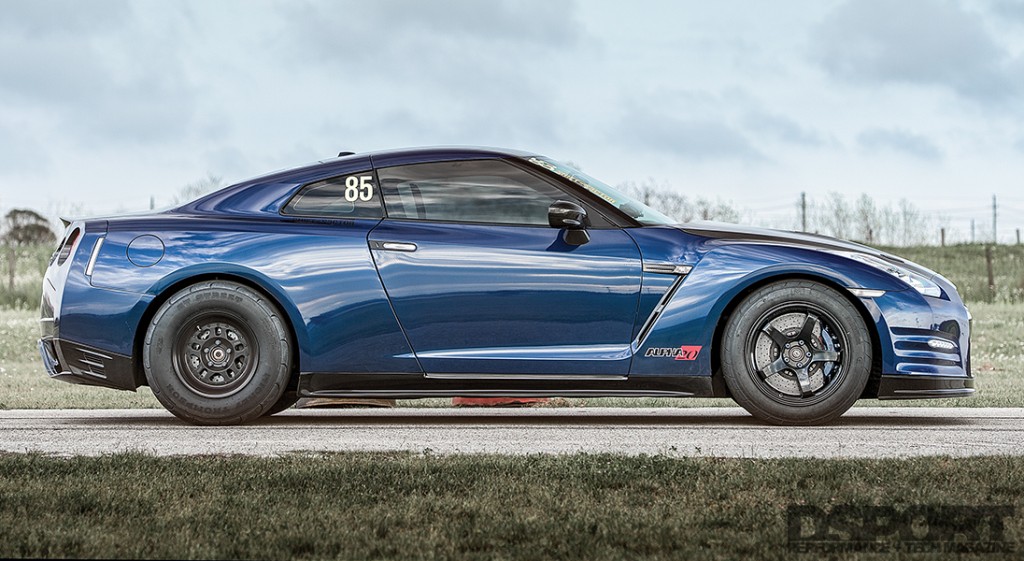 Soon, his GT-R went through a series of changes, from an Alpha 10 to an Alpha 12, followed by an Alpha 14. He competed at events across the country, including the Air Strip Attack in Colorado and the WannaGOFAST events on the East Coast. At the spring 2014 Air Strip Attack, the engine let go and Chamdi decided to step up once again, this time to an Alpha 16 package. Now with 1,600 horsepower, Chamdi made his way to the 2014 Shootout at Summit Motorsports Park in Norwalk, Ohio. He piloted his R35 to a personal best pass of 8.22 seconds at 179 mph in the quarter mile, a respectable figure for a privateer driver. He went on to win in the GT-R Quick Class, defeating John Shepherd in the finals. 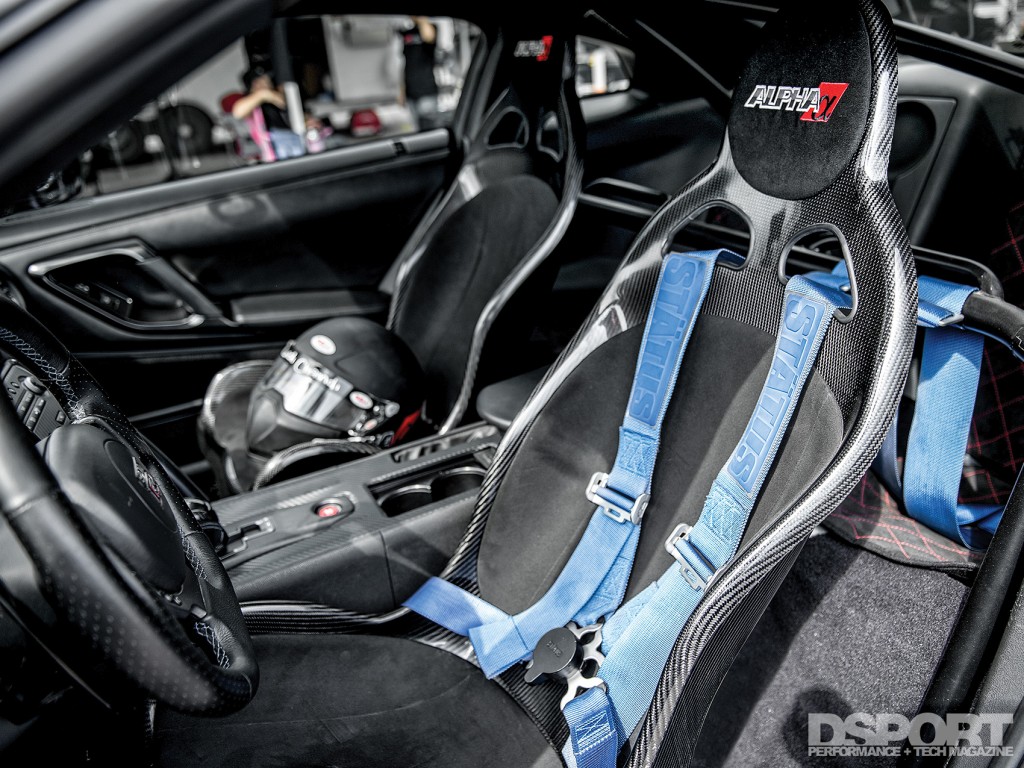 Chamdi had no disillusion about racing engines, especially since he’d pushed his VR38 to well beyond its factory output with the various Alpha iterations he’d gone through. Although his Alpha 16 engine endured more races than he or AMS expected, it was in certain need of a refresh. With the engine out, Chamdi elected to upgrade once again, this time to an Alpha 18 setup in order to stay competitive with the field. Unfortunately, during one of his races at the next Shift S3ctor event, the engine let go and he was knocked out of the competition.

The GT-R then took a trip back to AMS Performance for repair. Despite his disappointment, Chamdi’s misfortune of a blown engine turned into an opportunity to upgrade to an Alpha 20 package, only the second one in existence besides the one that currently equips the Omega GT-R. He agreed to the upgrade on the condition that the engine is fortified further. Chamdi understood that the underrated Alpha 20 kit makes approximately 2,000 horsepower at 45 psi on the dyno (limited by wheel slip) but closer to 2,200 horsepower at 48 psi at full tilt on the track, thus the engine would likely only survive for a few events before letting go or requiring a refresh. AMS’ Martin Musial understood his concern and offered to include some prototype components on his engine, including a billet aluminum girdle to stiffen the bottom end, a balancer on the crankshaft and one of the first dry sump oiling systems for the VR38DETT engine. As these products were still in the development stage and not yet proven, Chamdi decided to take the risk in order to compete. 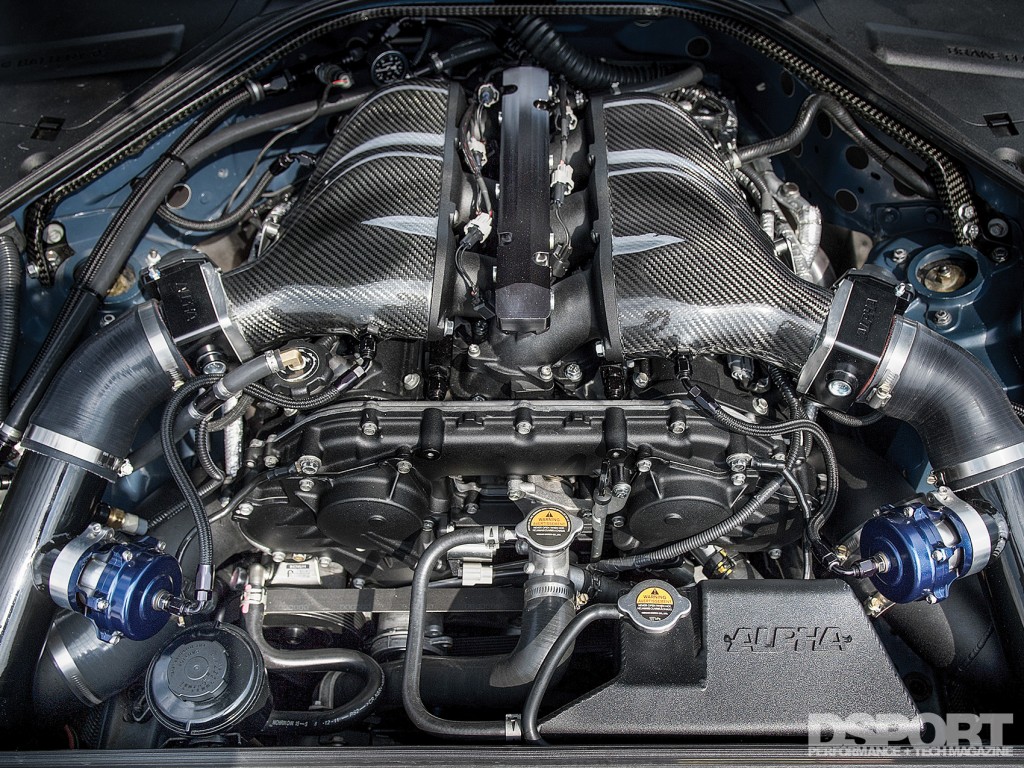 (L) The switch for the air-to-water intercooler must be activated manually. (R) This insulated box for the intercooler holds the ice water that chills the air charge.

The Alpha 20 upgrades had been completed just in time for Chamdi to debut his new and improved GT-R at the TX2K15 event in Austin, Texas. Racing with some of the quickest in the country, he faced steep opposition. On Sunday in the quarter mile competition, he rose to the occasion, winning in his class against other Alpha and ETS builds. In the process, Chamdi locked in his personal best, running a 7.984 second pass at 180.96 MPH. Although this wasn’t an overall world record setting pass, it was the first seven-second pass executed by a privateer, of which Chamdi was proud to have accomplished. He stated, “It was a gamble stepping up to the Alpha 20 package while employing untested components just before going to a race. But the competitor in me could not stand by and chance not being in the race. The risk turned out to be worth the reward, as the engine held together and put me into the record book as the first privateer to break into the sevens. Although I’ve only been racing for three years, I dove in head first, and I love it. I’ve set new goals for myself, which include setting the record in the quarter mile and the half-mile while dominating in the roll race.” Chamdi set some lofty goals for himself, but the fierce competitor in him wouldn’t have it any other way. 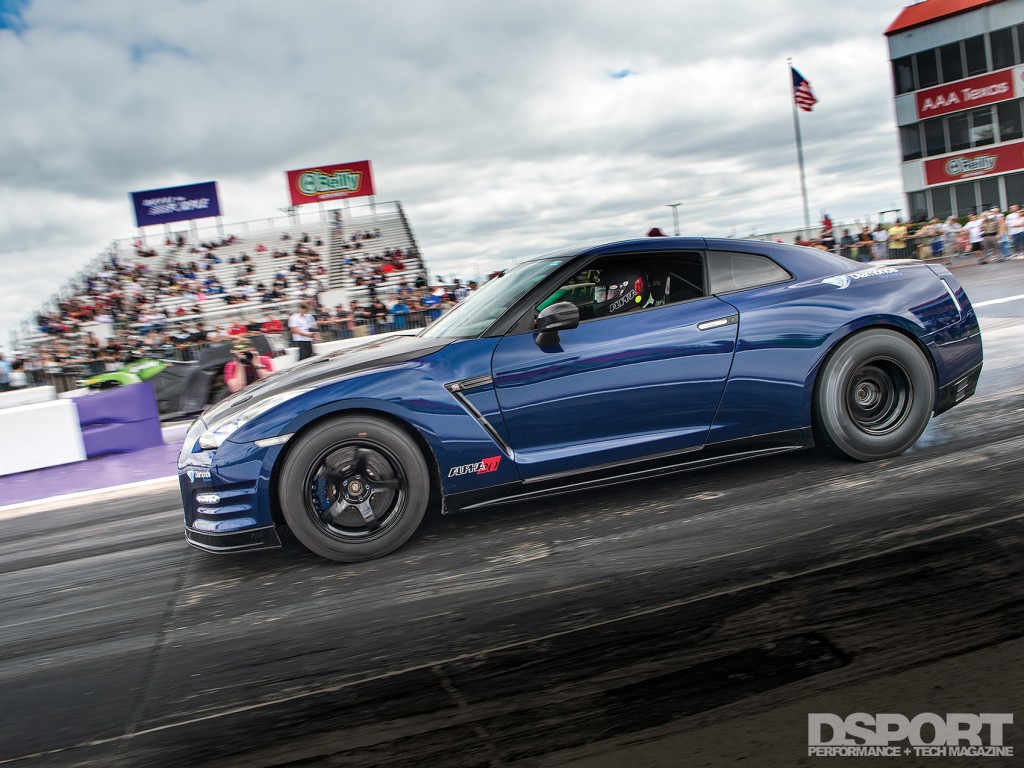 The Crash at the 2015 Buschur Shootout