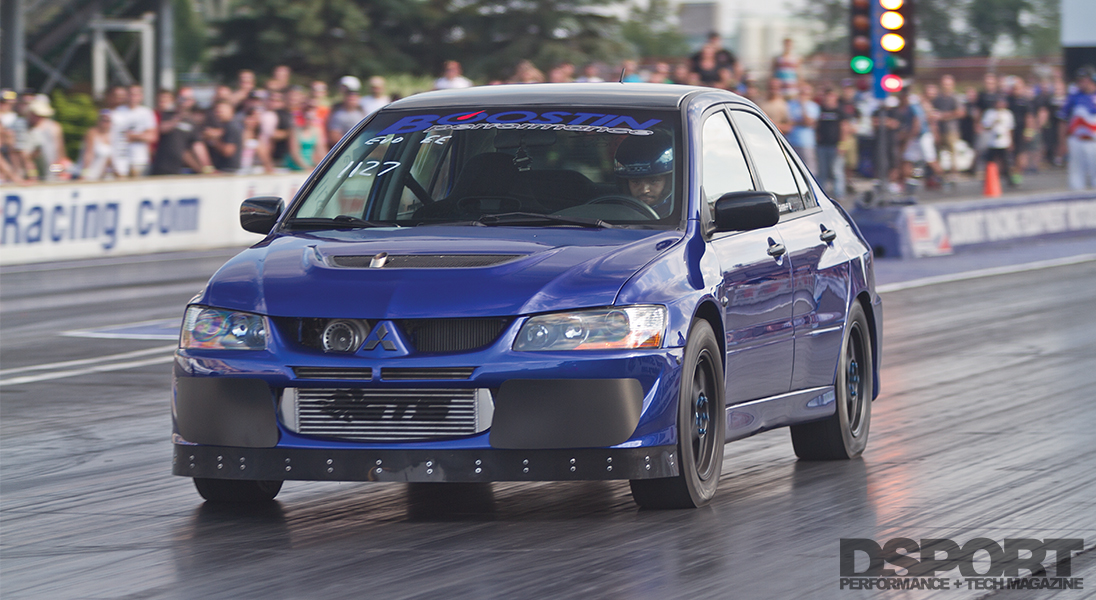 Because Racecar. This is the usual response to questions like, “Where is the interior? Why don’t the windows roll down? Where is the sound system? Don’t you have power door locks?” Sure, the absence of such equipment certainly helps to lighten the chassis and ultimately, record quicker passes down the 1,320. But realistically, who can enjoy their car for more than just a few seconds at a time without these amenities, especially when running errands, sitting in traffic or going on a road trip? Text and Photos by Richard Fong 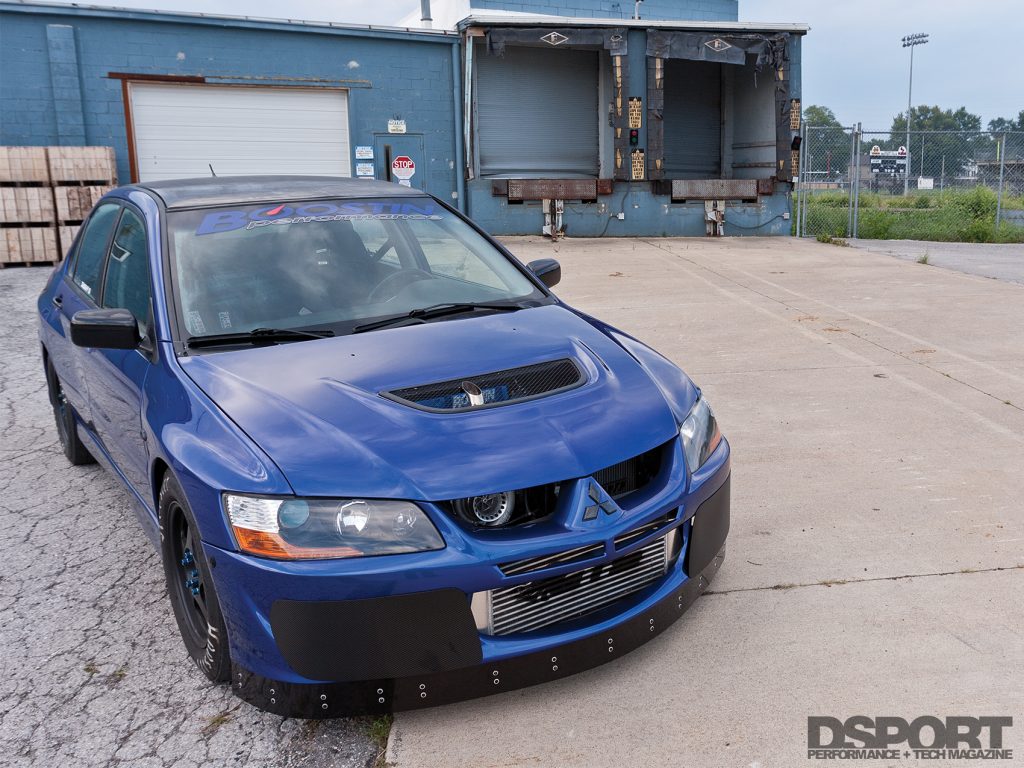 These very concerns hit home for Jason Flesher. Like many enthusiasts, Flesher started behind the wheel of a front-wheel-drive. When the time came for him to invest in a new ride, all he could focus on was traction and power. These criteria led him to seek all-wheel drive and forced induction. In September 2009, he purchased an unmodified EVO VIII. Flesher enjoyed his newfound traction and turbocharged engine, as the car was a competent performer out of the box. 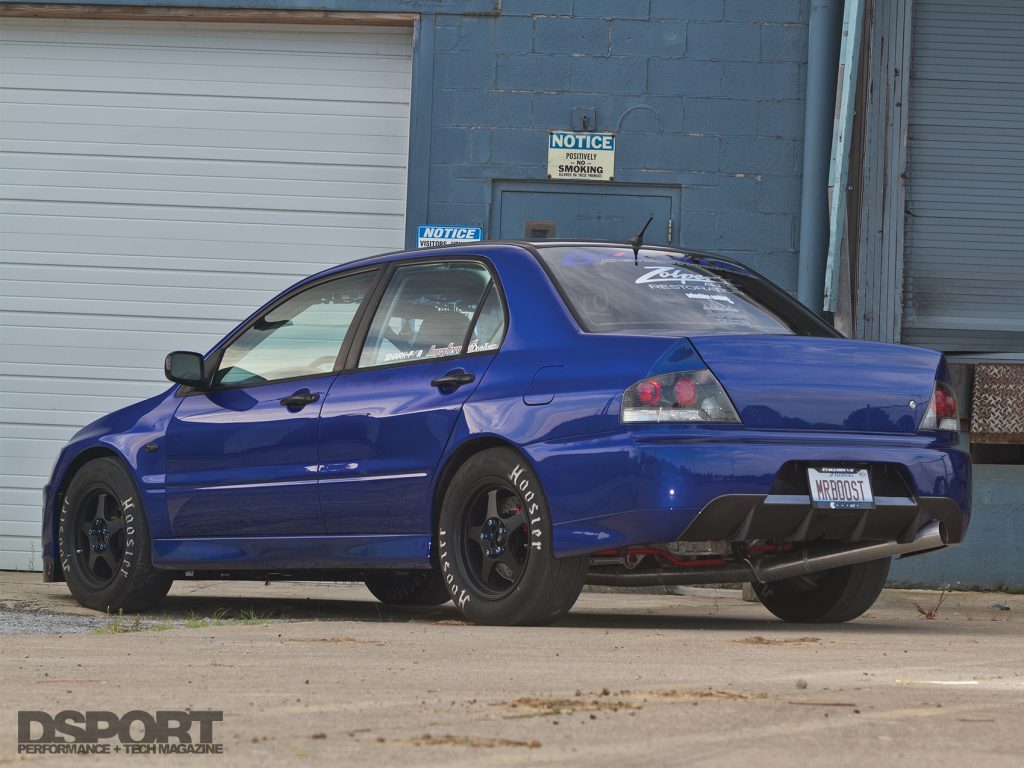 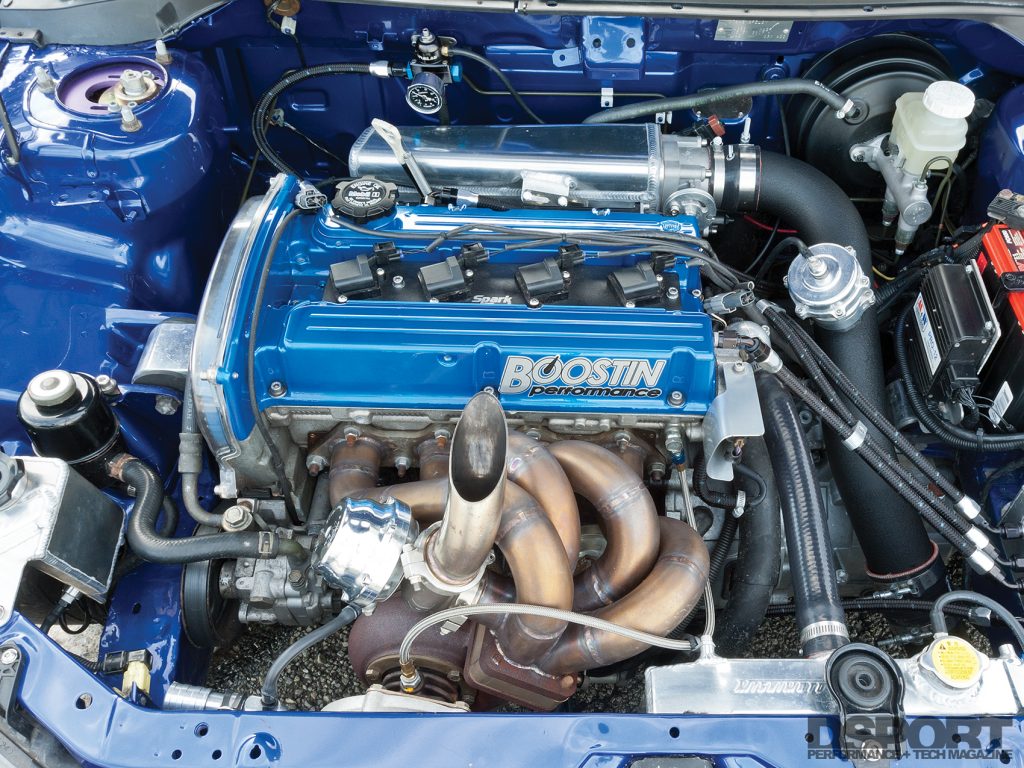 Like many owners discover, stock power just wasn’t enough. Before long, Flesher found himself bolting on parts in an effort to upgrade and improve his CT9A EVO. In August 2010, at the Buschur DSM/EVO Shootout, he came in second place in the EVO Stock Appearing Class. But as strong as the 4G63 engine is, the stock rotating assembly will eventually throw in the towel and require a complete rebuild. That day inevitably came, and events were set in motion that would lead to a two year build, putting Flesher’s patience and endurance to the test. He recalled, “I looked at the damaged engine as an excuse to raise the bar and aim for a lofty, yet attainable, goal. My objective was to create an insanely quick, quick spooling streetcar that could clear the quarter mile in 9.5 seconds at 150 mph. However, I didn’t want to turn my EVO into a hacked up drag car. It had to retain full streetability and amenities; after all, I enjoyed driving this car every day.” Once the engine was out of the chassis, the cylinder head and block were disassembled and sent to Class One, Inc. The block was overbored 0.5 mm and given a fresh hone before the cylinders were filled with a set of CP Pistons. The 10.0:1 compression slugs join the factory crankshaft by way of Manley Turbo Tuff connecting rods. The slight increase in bore yielded a nudge in displacement to 2,021 cc. To improve volumetric efficiency, Class One ported and polished the cylinder head before seating a fresh set of Supertech valves with dual valve springs and titanium retainers. Once the head rejoined the block, ARP head studs were used to keep the longblock assembly together under higher cylinder pressures. To lift the new valvetrain, a set of higher lift, longer duration Forced Performance FP5R camshafts were selected to best complement a larger turbocharger and greater boost levels. 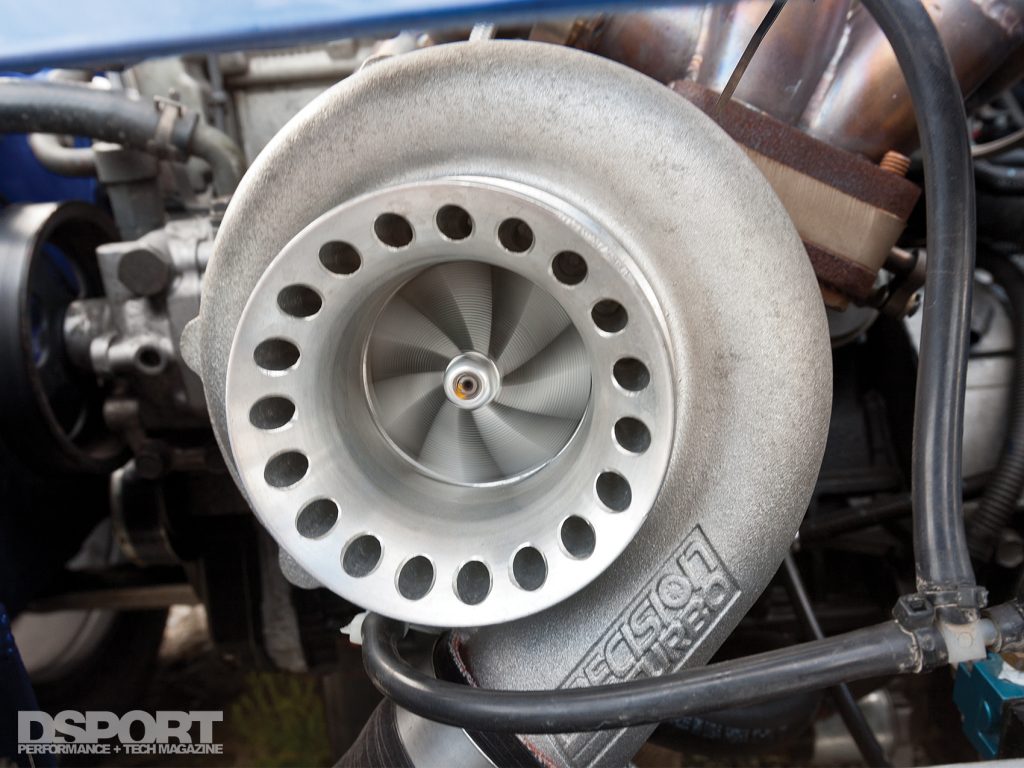 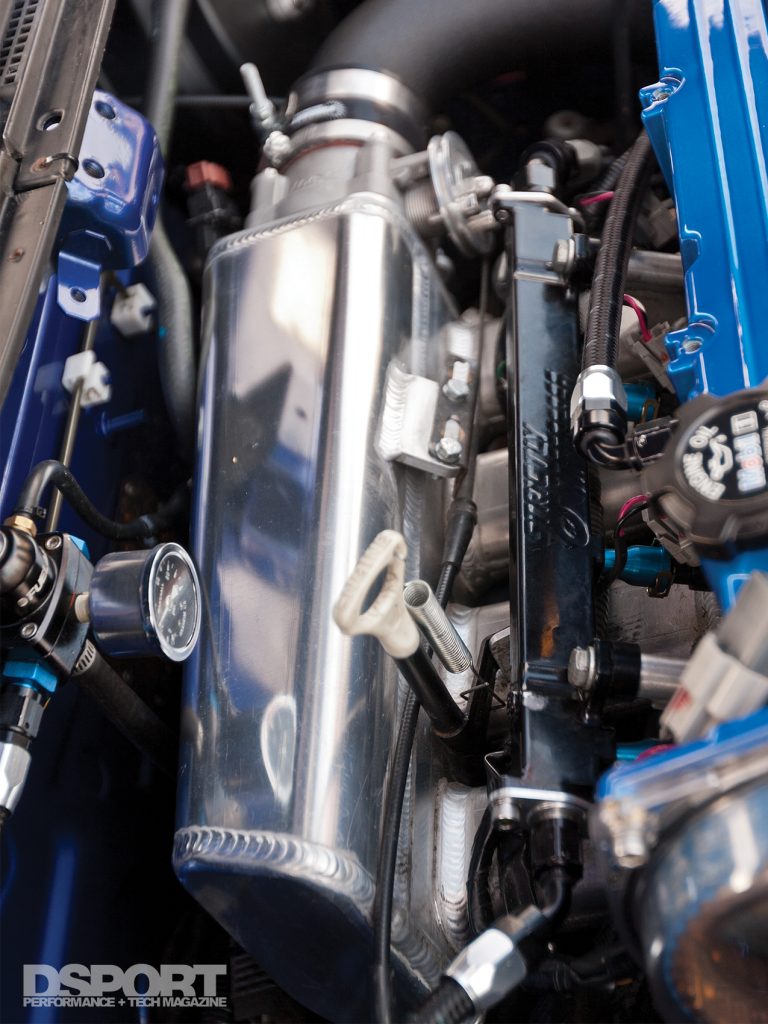 With a solid mill in place, Flesher turned his attention to increasing the capacity of the forced induction system. He decided to center the system on a massive Precision Turbo & Engine 6466 turbocharger with a divided inlet flange. A forward facing exhaust manifold from Shark- Fab positions the turbocharger just behind the bumper grill to ensure that an unobstructed supply of ambient air is always available. Sandwiched between the manifold and the turbine housing is Sound Performance’s trick spool valve. This valve effectively closes off one of the two inlets to the turbine housing to accelerate the exhaust gas velocity and sharpen the boost response of the turbocharger. When the closed port becomes a restriction at higher engine speeds, the valve opens and permits an unrestricted volume of high enthalpy gasses to enter the turbine housing for peak horsepower production. With this device, Flesher found a balance between response and peak power production that so often must be a compromise of one or the other. Over the last few years, many tuners have uncovered the benefits and advantages to E85 as a race fuel. Not only is it available at the pump and far less expensive than leaded racing fuel, it performs comparably. However, due to its lower specific energy and 9.8:1 stoic air/fuel ratio, an engine relying on E85 requires approximately 40 percent more fuel volume be delivered to the cylinders. Thus a modified Buschur Racing Double Pumper system pushes the ethanol to the fuel rail where Injector Dynamics ID2000 injectors deliver the increased volume of fuel to the engine. To manage and monitor the combustion activity of the engine, an AEM V1 EMS replaced the stock ECU under the dash. In the hands of Boostin Performance’s Devin Schultz, the fuel and ignition tables were optimized for a peak boost pressure of 48 psi. Strapped to a Mustang all-wheel-drive dynamometer, the EVO put down 850 horsepower and 632 foot pounds of torque to the wheels. 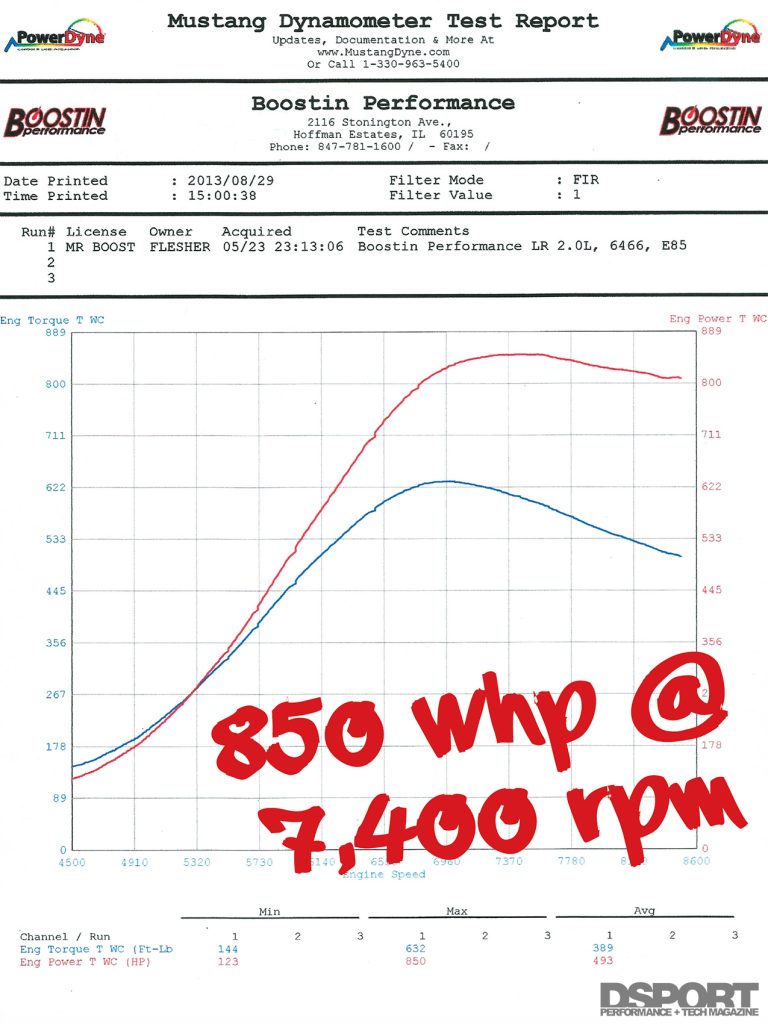 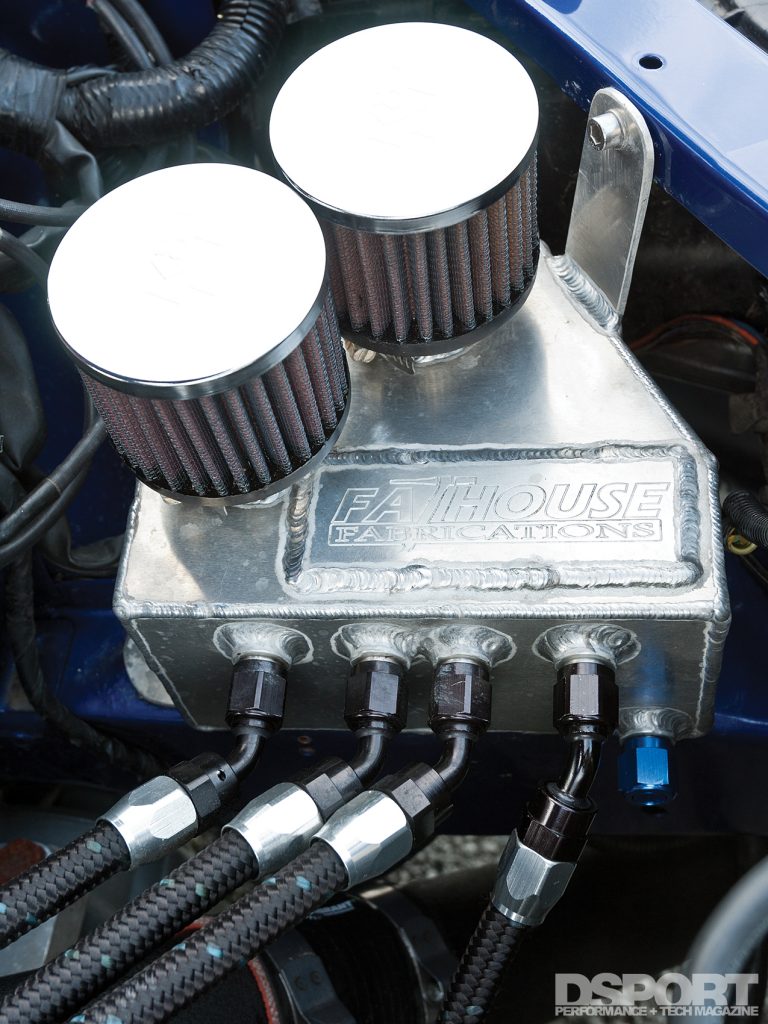 Too Much At Once

It’s easy to forget how involved rebuilding, upgrading and customizing components can be, especially when it comes to time. Flesher discovered this lesson the hard way, as he elected to do everything at once instead of in stages. As a result, his EVO VIII was offline for two years as the engine was rebuilt and the custom components were fabricated. He said, “When the stock engine let go, I should have just built the motor and kept the existing turbo system, so that I could get the car back on the road quickly. Instead, the comprehensive build extended the downtime because I was putting together the bigger turbo kit and working out the necessary custom work that needed to be done. One of the hardest things for me was seeing others enjoying their cars while mine was under construction for two years. But in the end, I was beyond thrilled when I heard the engine fire up for the first time.” Anxious to experience the fruits of his labors, Flesher brought his EVO VIII to the WannaGOFAST Half -Mile Runway Shootout. The event left him a mixed bag of emotions, as he set the record for the fastest EVO at 187 mph, but spun off the track and caused some minor cosmetic damage to car. Fortunately, with the help of Zolpers Auto Restoration, the EVO was repaired and repainted in time for the Buschur DSM/EVO/GT-R Shootout. On August 17, 2013, Flesher surpassed his goal and set a new personal best record of 9.26 seconds at 150 mph. 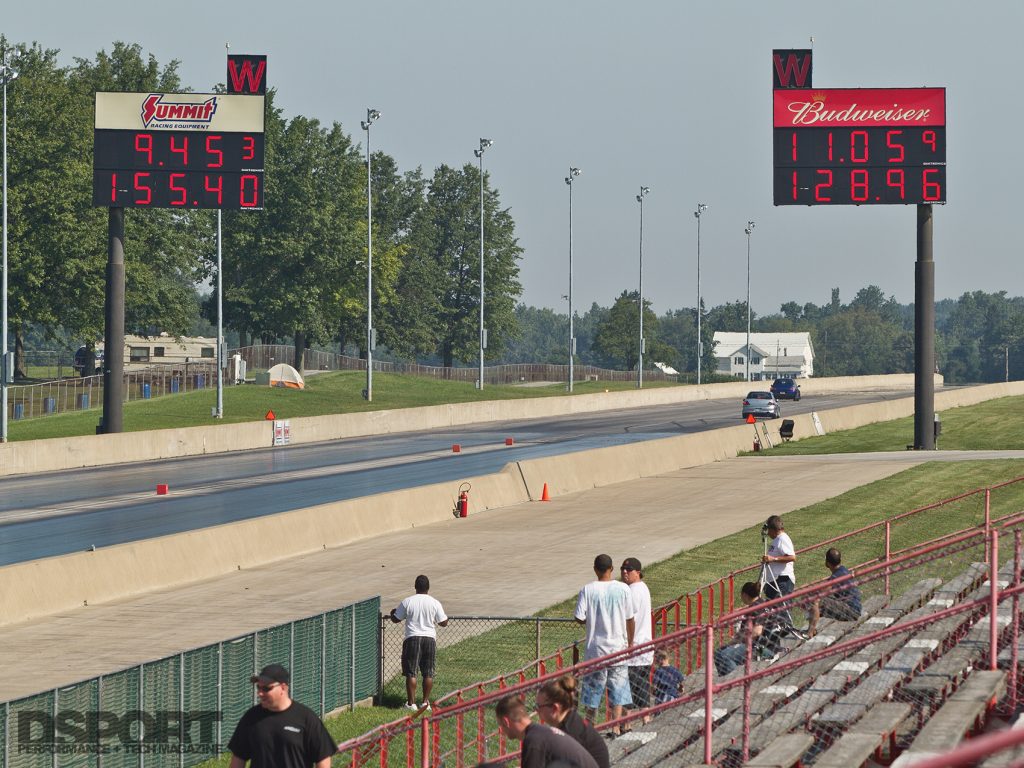 Flesher concluded, “I’ve learned that the greatest contributors to reaching a goal are dedication to the sport and the drive to never give up, no matter what adversity you’re faced with. Many sacrifices were made, but achieving my goal made all of that worthwhile.” Flesher has set a new goal of reaching the eight-second mark with a full interior and the 6466 turbocharger. While he sees this challenge as a pretty lofty goal, his determination and resolve could make achieving this goal a reality. 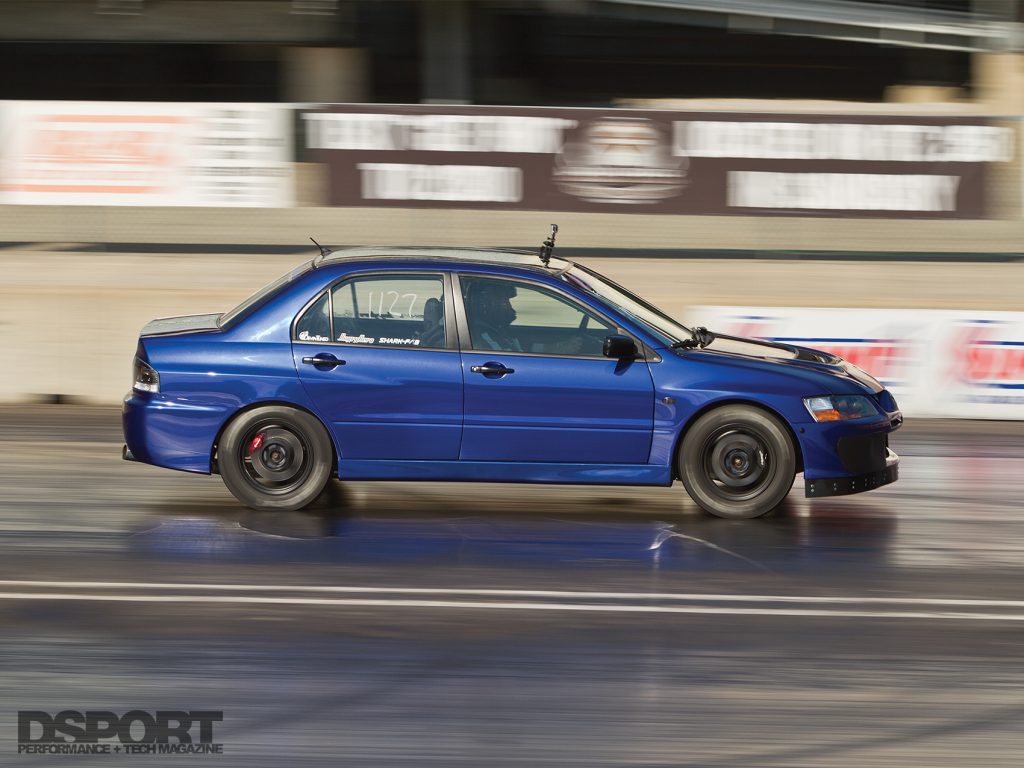