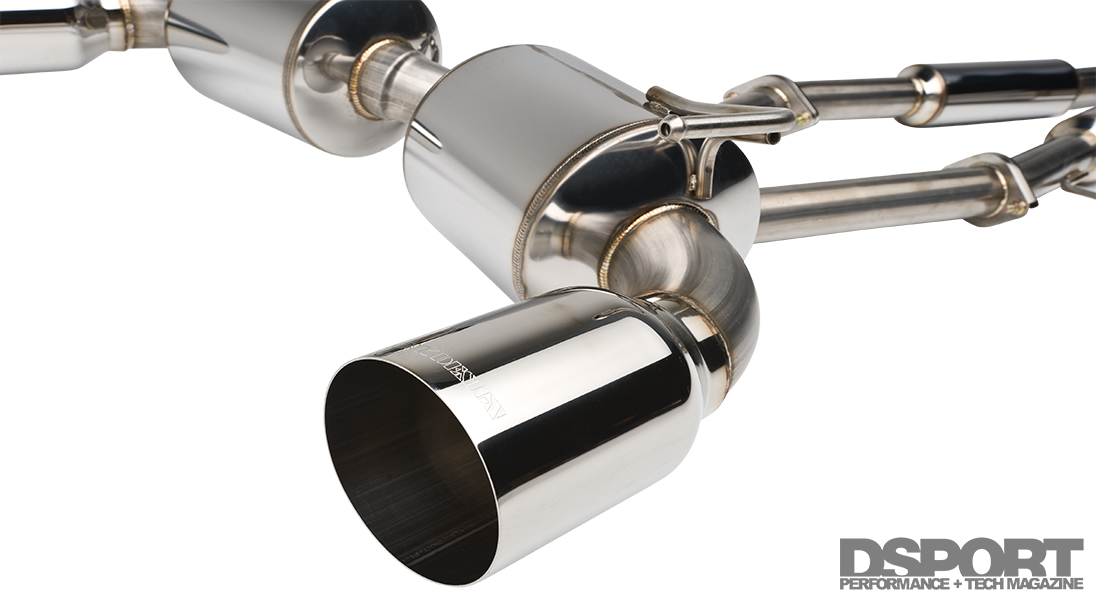 If your car were an orchestra and the engine the conductor, the exhaust system would be made up of horned instruments. Sure the band could play without the brass, but the melody would be off and it’ll sound like crap. When it comes to understanding how aftermarket exhaust systems work, the truth seems to be clouded with some complex and rather confusing theories. Here, we’ll outline how performance exhaust systems function, important features to consider, costs associated with aftermarket systems and ultimately how you can best select an exhaust for your car. 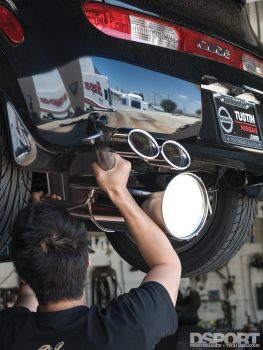 If you do your research on exhaust systems, you’ll notice that popular opinion is split between two schools of thought. Some will adhere to the notion that zero backpressure is best for exhaust systems. Others will say that backpressure is necessary to generate performance from the exhaust. So which one is correct? To get the right answer, you’ll want to consider what type of engine is in question. On turbocharged applications, an exhaust system that provides the least amount of backpressure is best. For naturally-aspirated engines, the answer is slightly more involved since exhausts on non-turbo vehicles need to accomplish two goals. The first objective of exhaust systems is to create an easy path for exhaust to flow out of the engine while the piston is traveling from bottom dead center to top dead center during the exhaust stroke. If the exhaust system generates substantial backpressure during this event, the piston must use energy (horsepower) to move up the cylinder. The amount of energy used to counteract the backpressure is known as pumping loss. The best way to eliminate pumping loss is through the “bigger is better” philosophy of exhaust design. Unfortunately, reducing pumping loss is not the only consideration for naturally-aspirated engines. The second goal is to establish the speed of the exhaust flow that will help draw in more air-fuel mixture during the valve overlap period – the period of time when the exhaust valves are closing and the intake valves are simultaneously opening. An exhaust system that sets an optimal velocity can assist in maximizing the filling of the cylinder with the combustible mixture of air and fuel. This is primarily the responsibility of the exhaust manifold (header) but a substantial amount of flow is determined by the exhaust system that is downstream of the exhaust manifold. 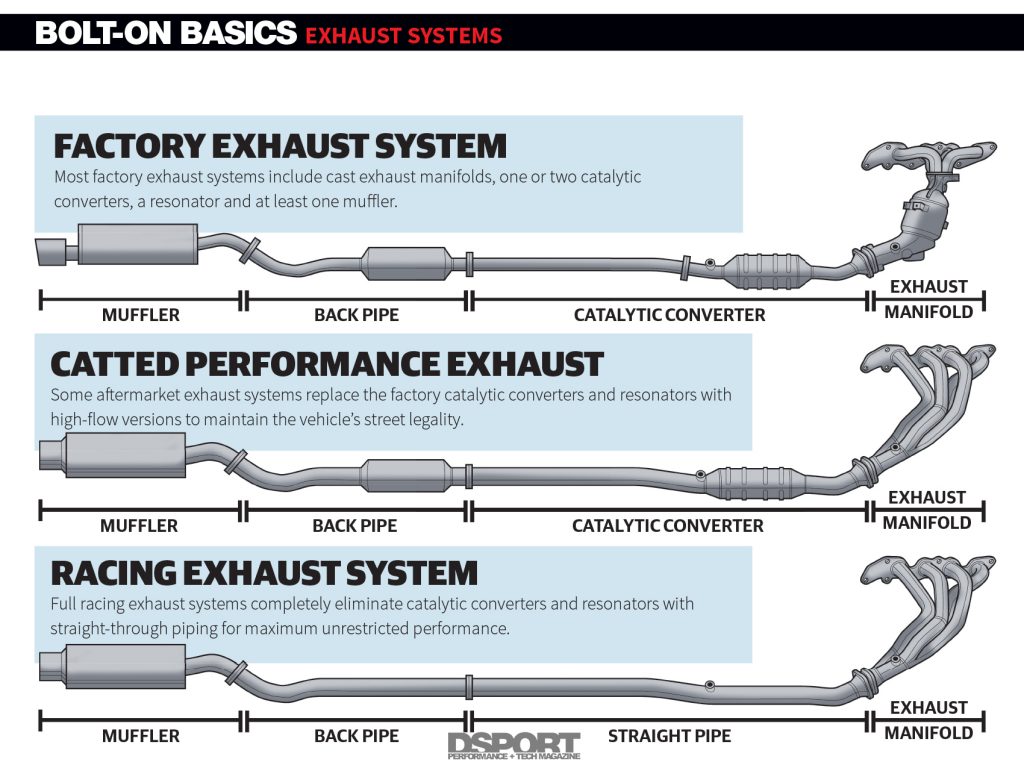 As you can tell by now, the exhaust system consists of more than just the muffler. In reality, every component after the exhaust ports of the cylinder head(s) has an effect on the performance of the exhaust system as a whole. A bottleneck anywhere in the system could create a restriction that subsequently negatively affects engine output. The individual components of an exhaust system include the exhaust manifold (header) for naturally-aspirated engines, exhaust manifolds (turbo manifolds) and downpipes for turbocharged engines. Both turbo and non-turbo vehicles will have an intermediate pipe (B-pipe), catalytic converter, exhaust piping and muffler. 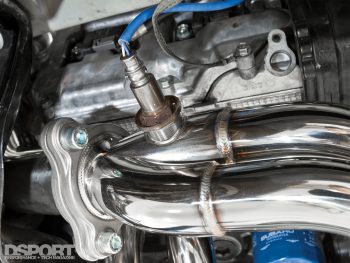 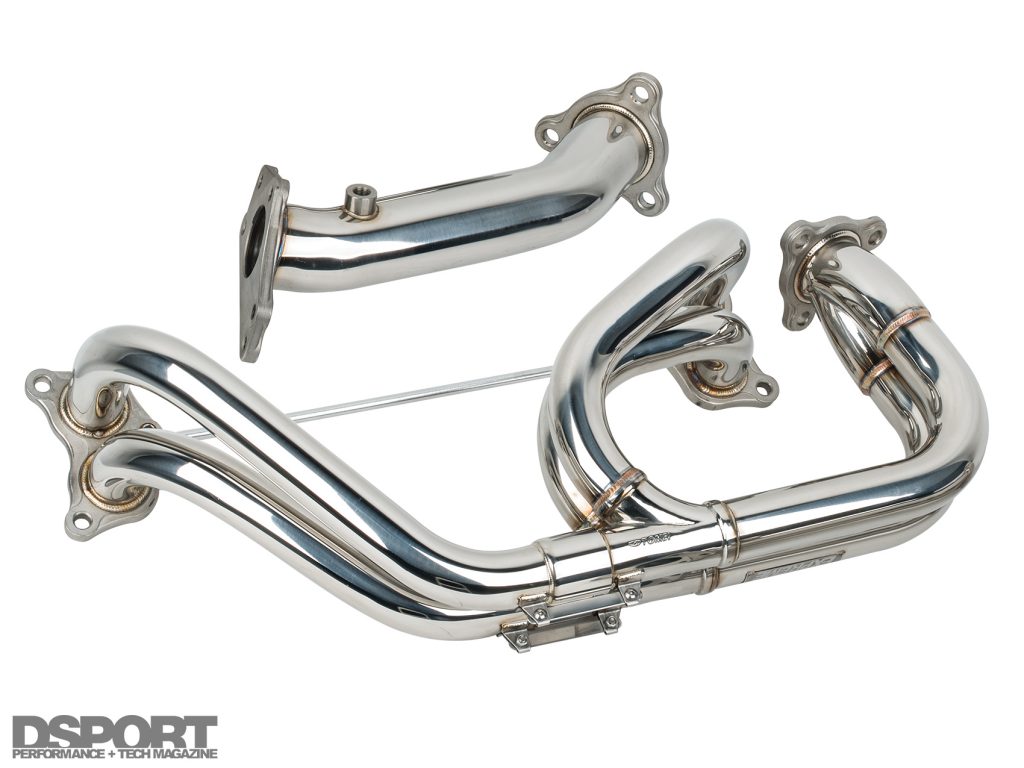 Depending on the engine platform and design of the manifold, the shape and size can vary. Some manifolds have equal length runners for each cylinder as seen on this manifold for a horizontally opposed “boxer” engine.

Exhaust systems can be constructed from a host of different materials. The most common metals used are mild and stainless steels. While the weights of mild and stainless steel are comparable, stainless steel is much more resistant to corrosion, whereas mild steel is very susceptible to rust. When deciding which exhaust to buy, take notice of which grade of stainless steel is used. Some exhaust manufacturers use T409. T409 has enough chromium and nickel to resist corrosion but it is not as strong as T304. T304 alloy has approximately 20-percent chromium and 10-percent nickel, which allows it to be even more corrosion resistant than T409. If reducing the weight of your car is a requirement when replacing your exhaust system, you might want to look into exhausts constructed from more exotic materials such as titanium. Titanium alloys can offer the same strength of steel at just half its weight. The mechanical properties of titanium can also make them very desirable in high-temperature applications. Although it may sound like all exhausts should be made in titanium, the processing and manufacturing of titanium alloy tubing adds considerable cost in comparison to stainless steel construction. 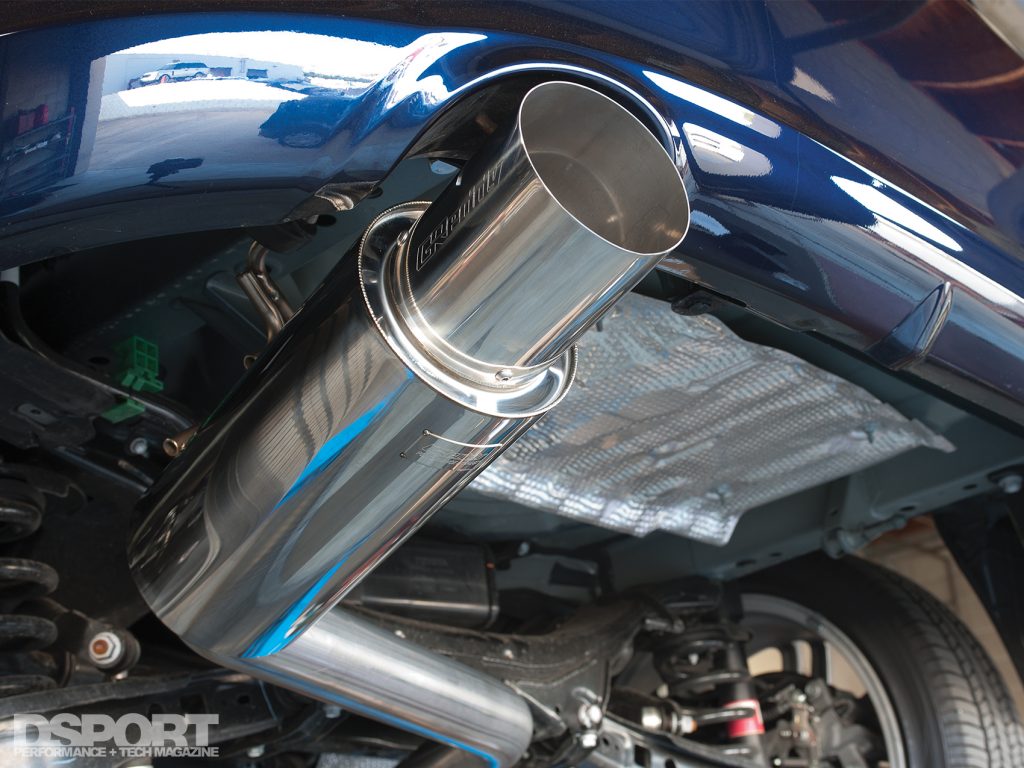 In addition to the materials used in the construction of exhaust systems, the design and manufacturing process largely determines the end performance as well. At the simplest level, the diameter of the exhaust piping needs to match the demands of the engine. Like previously mentioned, bigger is better on turbocharged applications. Non-turbo applications will need to be more finely tuned in order to determine the optimal exhaust piping diameter. It’s important to know that the diameter of the exhaust and the sound level emitted are directly related. The larger the exhaust, the louder it will be. Many manufacturers complete decibel testing on exhaust systems, use this data to get an idea of how loud your car will be. To fit each vehicle’s specific chassis, exhaust systems will have numerous bends in the piping to route the exhaust to the rear of the vehicle. A high-quality exhaust should be mandrel-bent as opposed to pressure (crush) bent. Pressure bending creates a decrease in diameter whereas mandrel bending maintains the tubing’s original diameter after the bend is made. This is due to the material being allowed to stretch on the outside of the bend and compress on the inside during the bending process. The precise execution of the exhaust systems’ bends plays a major role in determining the fitment of the system. Maintaining clearance to other components is critical in the design of high-quality exhausts. Rubbing, rattling and vibrations create unpleasant noises, unnecessary wear and even failure of some components. 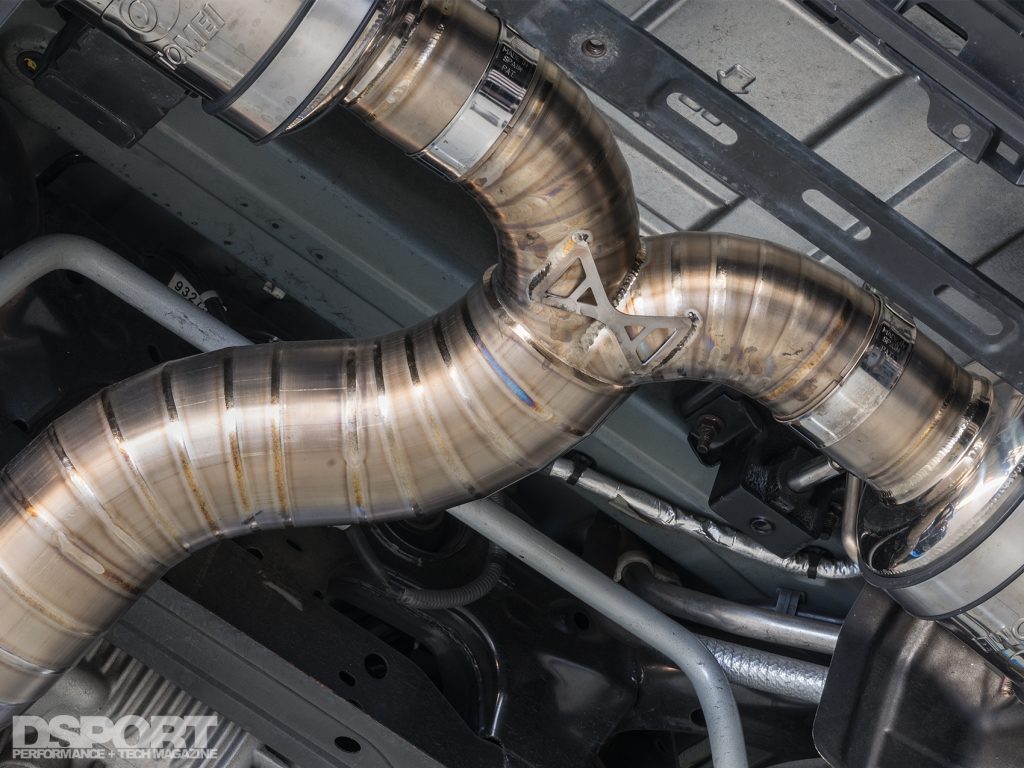 The most common exhaust offering is the cat-back system, which gets its name because it replaces everything downstream of the catalytic converter(s). Many enthusiasts will opt to replace their factory exhaust with a cat-back system. While this option gives the appearance and sound that is desired by many, it may not give the best performance gain. In many cases, eliminating the factory catalytic converter(s) proves to add the most power. On turbocharged applications, the downpipes are typically the biggest bottlenecks in the system and thus aftermarket downpipes deliver the most performance out of all other exhaust components. Each application can respond to modification differently, so consult the tuners of your specific application to know your best starting point. 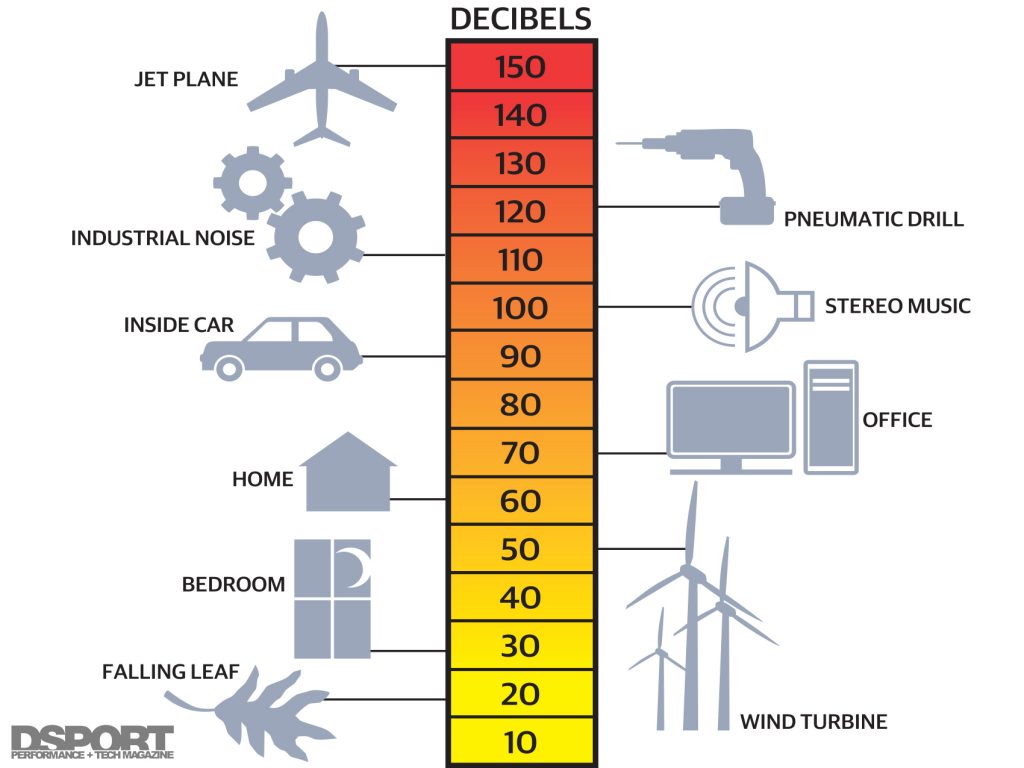 Use this decibel chart for reference when deciding if an exhaust system is too loud. Most laws determine exhausts to be unlawfully noisy beyond 95dB.

This can be a lot of information to consider so don’t get overwhelmed by the options. Narrow it down to what fits your application and the goals you have for your car. From there, rely on your local tuners for further recommendations and use this article to sort through the various features. 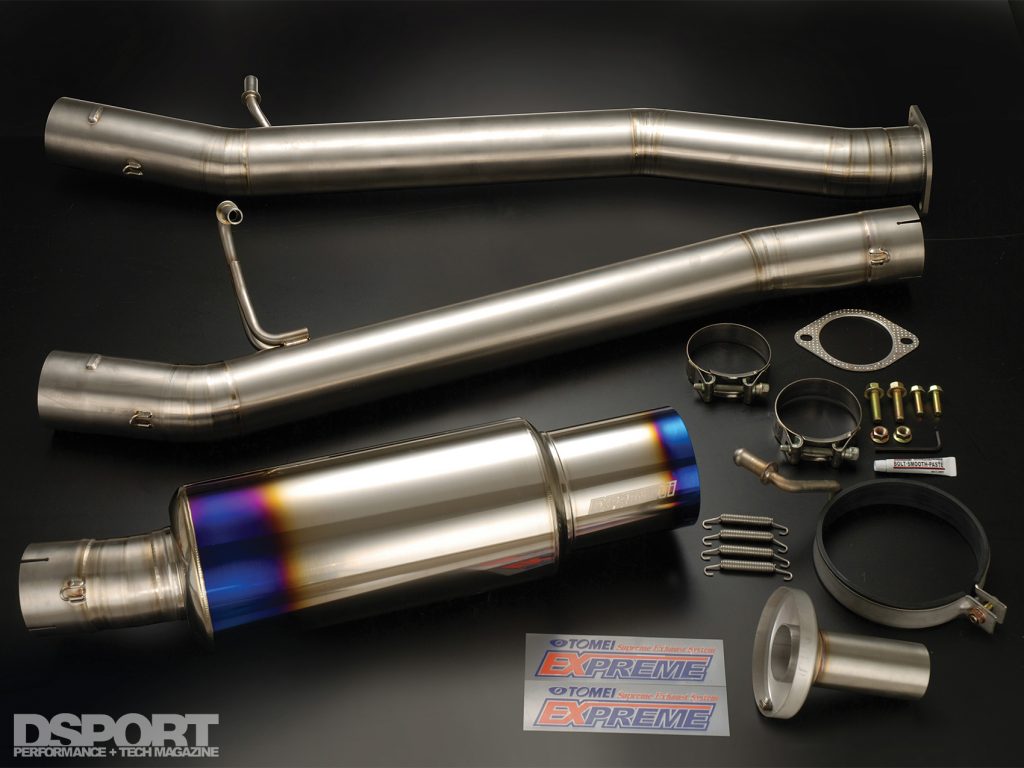 Click here for a PDF of various test results.