Get back in the driver’s seat. this popular and sound advice is often given to drivers that recently experienced a mishap, in order to keep them from losing their edge. Some can’t bounce back, while others return with a vengeance. The latter group exudes a champion’s spirit, the motivation that separates the world’s best from the rest. Text by Richard Fong // Photos by Richard Fong and Courtesy of Brian Young/AMS Performance 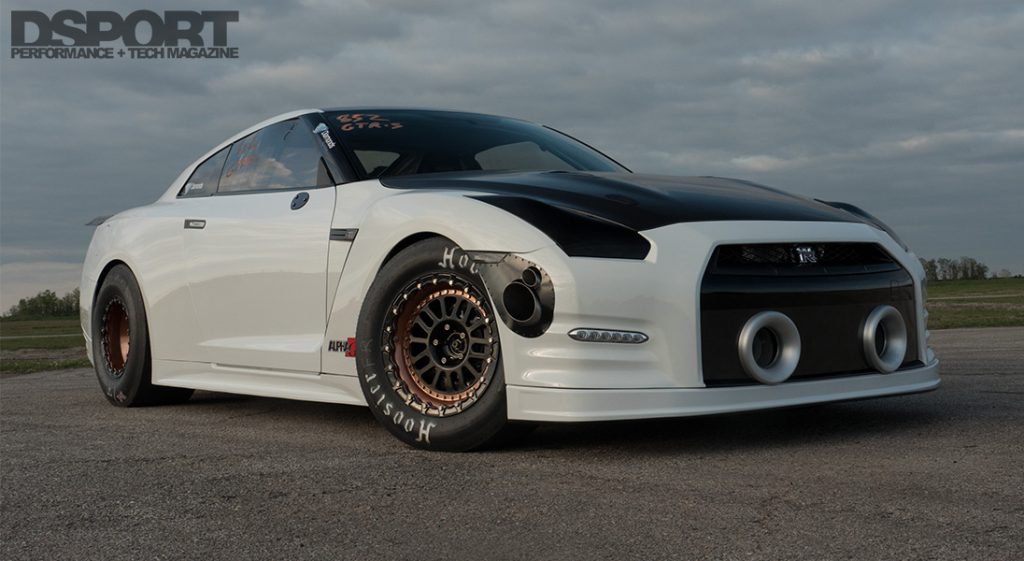 Gideon “Gidi” Chamdi offers a prime example of this attitude. He captured the GT-R Quick Class victory at the 2014 Shootout presented by Buschur Racing with his blue ALPHA 16 GT-R, which earned him a feature in the pages of DSPORT magazine (Issue #155, June 2015). Between Shootouts, he put this GT-R through an evolution, going from ALPHA 16 to 18 to 20. With the GT-R running in championship form, Chamdi returned to compete in the Quick Class again at the 2015 Shootout. Unfortunately, during an exhibition pass that was sure to be deep in the seven-second realm, smoke began to billow at the top end of the track. An unexpected loss of traction followed, sending Chamdi and his ALPHA 20 GT-R into the K-rail. Although the GT-R was totaled, Chamdi thankfully walked away unscathed. 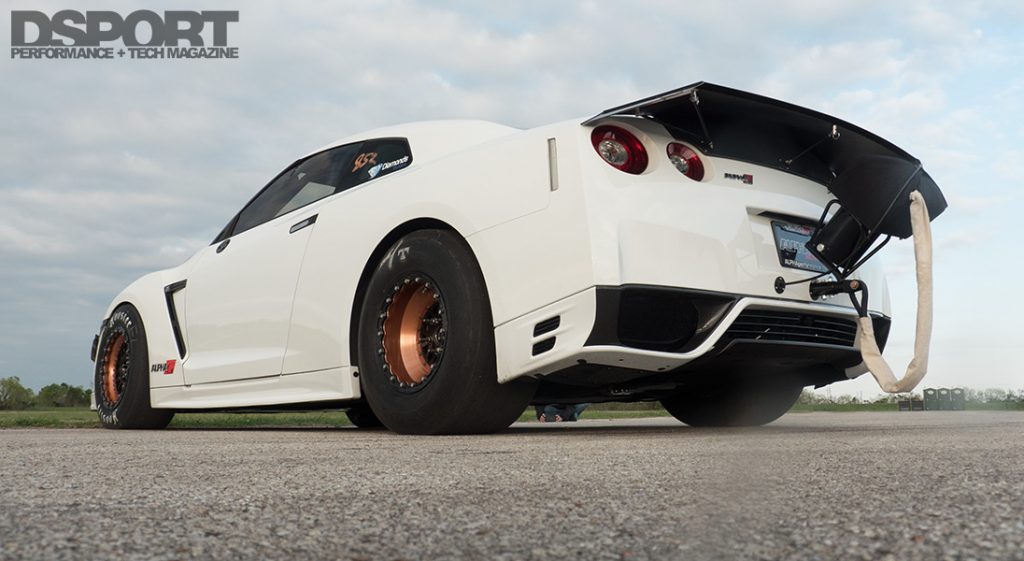 Bloodied but not beaten, Chamdi returned from the Shootout to his home in San Francisco with only one thing on his mind, to return to competition and set the GT-R world record in the quarter mile. Like a coach putting in his unknown second string player to replace the star, he shipped his white street GT-R to Chicago to be made into a world-class contender. Chamdi discussed his plans and objectives with AMS Performance’s Martin Musial and shortly after, work began on the new project. Headed by AMS’ special projects technician Ivan Phipps and lead technician Ricky Rick, the AMS team set out to complete an eight-month build in the span of just over four months. The plan, to employ the proven blueprint of the ALPHA Omega to take his street GT-R to the next level. The objective, to contend for the title of World’s Quickest GT-R. The goal, to debut his new build at TX2K16 in Houston, Texas. The ALPHA G project was born. 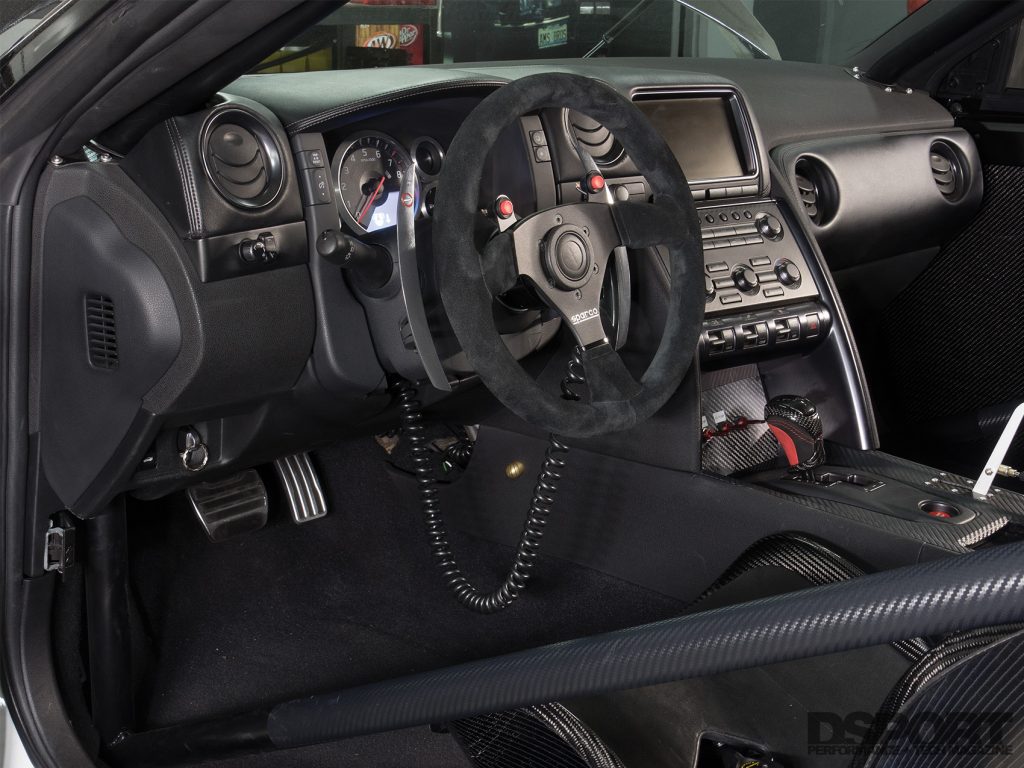 Beyond the Usual Boundaries

Unlike the ALPHA Omega, which was intended to retain as much of its streetcar persona as possible while competing on the world stage, the ALPHA G was not constrained by any particular criteria besides retaining its full chassis, shell, dashboard and carpet. Fabricator Dominic Markiewicz started by welding in a custom cage to stiffen and fortify the chassis. To offset some of the weight gained, numerous carbon-fiber panels replaced their metal counterparts, including an ALPHA carbon-Kevlar hood, roof and trunk lid, and a pair of Overtake carbon-fiber doors with ALPHA carbon-fiber door panels. 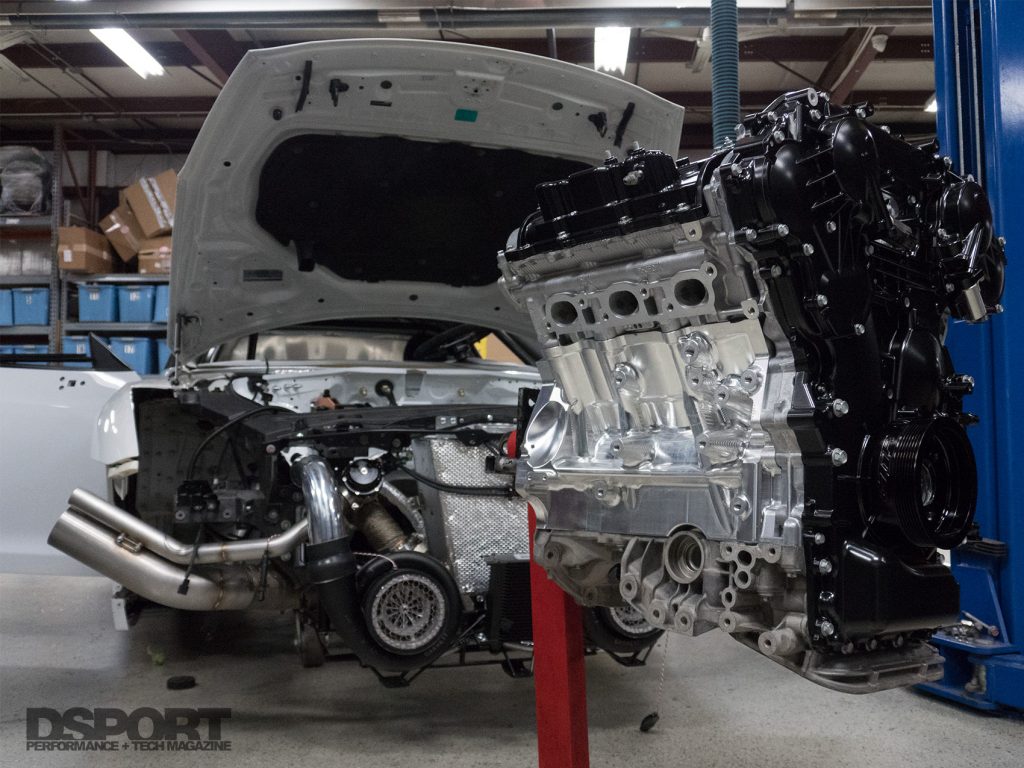 The ALPHA billet aluminum V2 block that powers the ALPHA G displaces 4.0 liters and reliably delivers in excess of 2,500whp.

Thanks to its extensive R35 GT-R development, AMS has become knowledgeable in the ways of the VR38DETT engine. This knowledge base and experience has also identified the output thresholds of the engine. AMS had been developing its billet aluminum VR38 block program for several years, now onto its second version. It is this ALPHA billet aluminum V2 block that serves as the foundation for the ALPHA G. The block’s iron sleeves were bored to 98mm before AMS filled the cylinders with Manley Performance AMS-spec pistons that make the connection to the crank by way of AMS-spec aluminum connecting rods. With an additional 2.5mm of cylinder bore over stock, the displacement of the engine increased from 3,799cc to 4,001.3cc. Up top, AMS applied its ALPHA spec CNC program to the cylinder heads before upgrading the valvetrain with Ferrea dual valve springs and titanium retainers. AMS topped the engine assembly with its ALPHA carbon-fiber intake manifold and dual 75mm billet aluminum throttle bodies to regulate and distribute the intake charge to the cylinders. T1 Race Development’s mechanical fuel pump system supplies methanol to the intake ports by way of an ALPHA performance triple rail fuel delivery system, Injector Dynamics ID2000 primary injectors and Moran Motorsports 6,000cc/min secondary injectors. 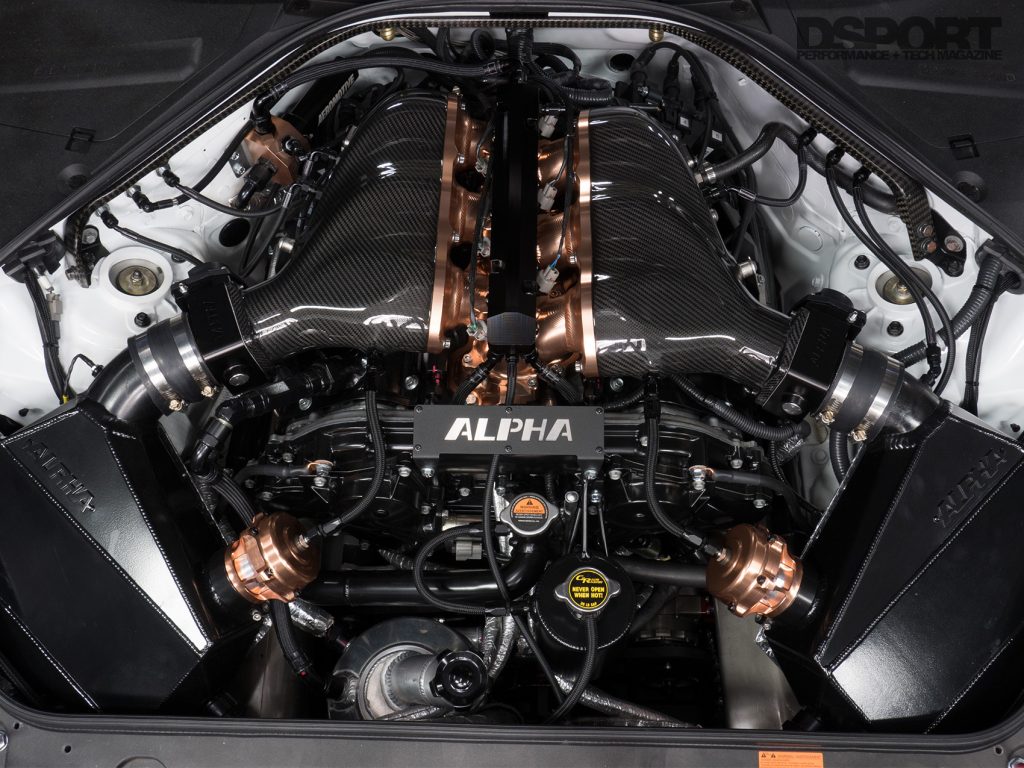 With a 4.0-liter billet aluminum block prepped for methanol under the hood, attention shifted to filling the combustion chambers with air, and lots of it. Since the ALPHA G was practically unrestricted in its design, the team agreed that placing the turbochargers at the front would allow for larger turbochargers to be employed. A pair of T4-framed Garrett GTX turbochargers soon took their place at the front of the GT-R, supplying high enthalpy gasses by way of a pair of custom exhaust manifolds. TiAL Sport MVR wastegates hold the boost pressure to around 35 psi, which AMS measured to produce 1,650 horsepower on a Dynojet Dynamometer. At the track, Musial and Jacob Compton refined the fuel and ignition tables of the Syvecs engine management system while ALPHA electronic boost control solenoids command the MVRs to hold boost pressure to over 70 psi. At this level, AMS estimated horsepower output in the 2,500 horsepower range.

(L) The radiator was moved to the back to make room for the massive Garrett GTX turbochargers at the front. (M) AMS modified a Magnus Motorsports dry sump system to ensure the consistent oiling of the ALPHA billet aluminum black. (R) T1 Race Development’s mechanical fuel pump keeps the methanol flowing.

Making 2,500 horsepower at peak boost satisfies one side of the racing equation. The other side requires a driveline that can reliably deliver that power to the asphalt. To this end, the GR6 transmission was sent to Sheptrans in Ohio. There, John Shepherd strengthened the driveline with a custom Dodson Motorsports 13-plate clutch pack along with his own gearbox recipe to ensure that the torque produced by the crankshaft reaches the T1 Race/Belaks drag wheels mounted with 28-inch Hoosier and MT slicks. 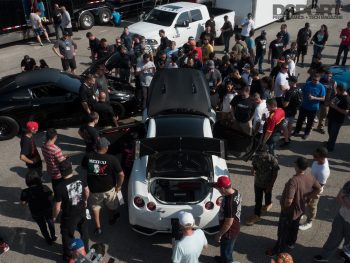 The AMS crew finished the build in just four and a half months, but they were unable to shake down the ALPHA G or make critical adjustments prior to loading it onto the transport bound for Houston. The GT-R arrived at the end of the day on the first day at the Royal Purple Raceway. AMS quickly unloaded the car and began preparing for its first trip down the strip that night. Musial and Phipps went over the initial tune and the chassis before Phipps got into the driver’s seat, made a 5.2-second 1/8-mile blast and then coasted through the traps in 8.3 seconds on low boost. The next day, Chamdi got to make his first pass in the R35, clicking o a 7.85-second pass. After making some adjustments, the boost was dialed up a few more psi before he went back out and ran an even quicker 7.771-second pass at 183 MPH. These first two passes with the new machine exceeded his previous personal best of 7.94-seconds set in the blue ALPHA 20 build. A few gremlins showed up soon afterwards, preventing him from making more passes that weekend.

AMS/ALPHA Performance chose a pair of Garrett GTX turbochargers to provide more than 70psi boost pressure to the ALPHA 4.0-liter billet aluminum engine. The turbochargers rely on air-to-water intercoolers to drop intake temperatures. The Magnus Motorsports dry sump system’s oil reservoir is positioned between the turbochargers behind the oil cooler at the front. Custom brackets provide support for the myriad of components positioned forward of the subframe. 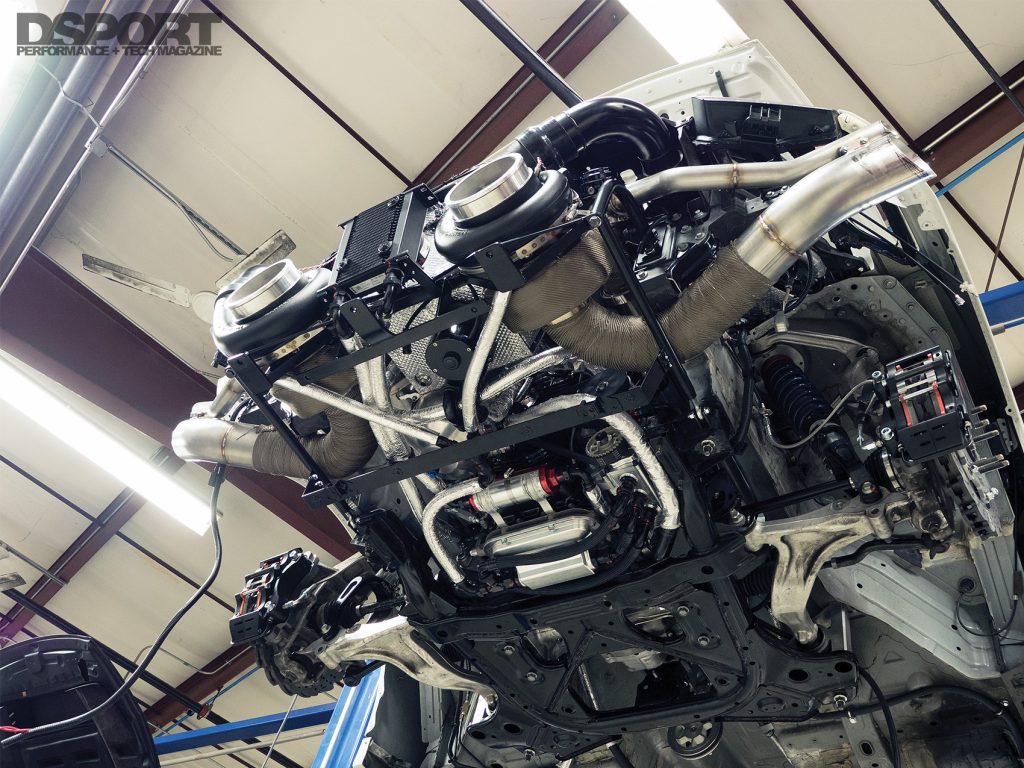 Earning a Spot in the Magnificent Seven

Two months later, Chamdi made some additional test passes at Great Lakes Dragaway. His cleanest run yielded a 7.547-second pass at 195.73 MPH, his new personal best and deep enough into the seven-second realm to bump the Subzero Yellowmonster ver.1 from the sixth spot in DSPORT’s Magnificent Seven GT-Rs list. In August, Chamdi and AMS returned to Norwalk, Ohio to race at the 2016 Buschur Shootout. He joined two of the three quickest GT-Rs in the world in the GT-R Quick Class. After qualifying second behind the USA record holding ETS GT-R, he set yet another personal best pass in the second round of eliminations with a 7.363 @ 200.26 MPH. This time slip pushed him further up the ranks, surpassing the Omega and T1 Race Development to rank fourth in the world and second in the USA. 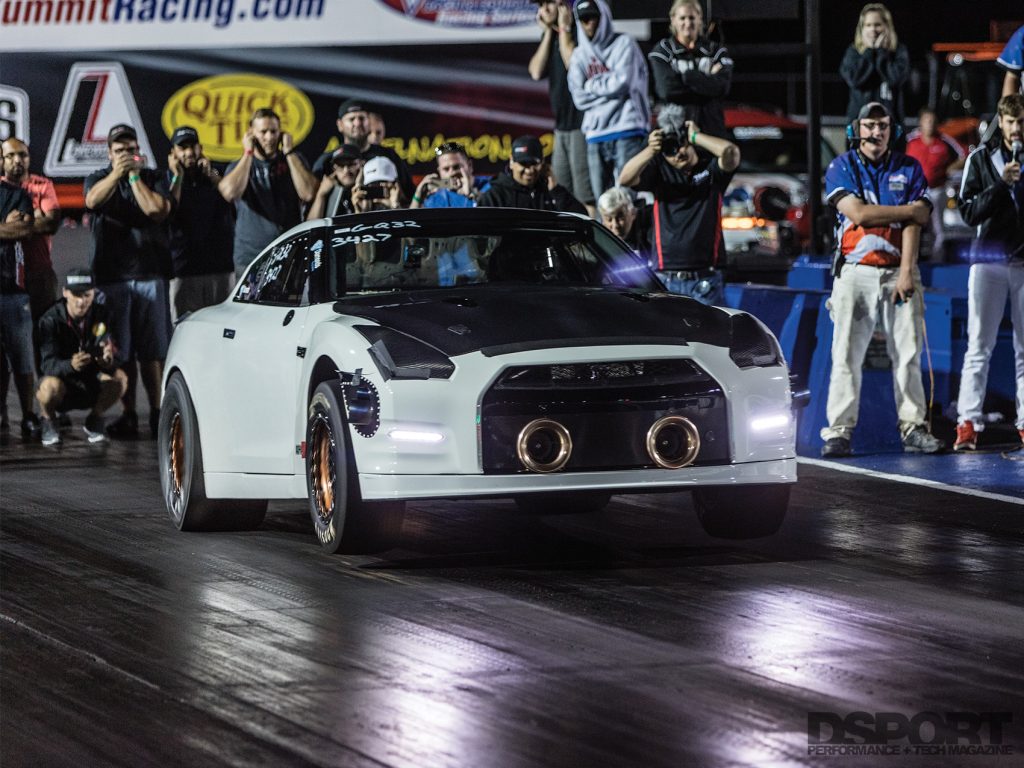 Bouncing back from a crash to stand among America’s quickest GT-Rs would be a Herculean effort for most. For Chamdi, his insatiable competitive spirit could not accept anything less than to be the best, and the quantum leap he has taken with his street GT-R is the proof. A mere 0.038-second improvement would make him the quickest in America. Just 0.157-seconds is all it would take to be number one in the world. Although the world’s greatest work hard to shave fractions of seconds from their elapsed times, Chamdi welcomes the challenge and has made it his personal goal to bring the World Record back to the USA.

Watch as Gidi Chamdi pilots the Diamonds By Wire Alpha Performance Alpha-G GTR to a New World Record pass of 7.14 @212MPH. AMS Performance traveled to Milan Michigan and brought back the World Record!

Just like we see new YouTube stars popping up every year, there used to be a time in the late...