BECAUSE A MANUFACTURER DECIDES NOT TO mass produce a product doesn’t mean that product is useless. At the peak of the popularity of the Nissan Silvia S15, NISMO developed a demo car to exhibit the potential of its line of R-Tuned components. The demo S15 prototyped NISMO R-Tuned body components, suspension and a 2.2-liter stroker engine. After showcasing the car, NISMO decided to leave the stroker engine off the list of products to be produced for the public. As the vehicle had no further use to the auto manufacturer, the car began collecting dust. NISMO sponsored Auto Produce Boss (AP Boss) gladly took in the S15 and started its own product development on the car. What began as an R&D project quickly evolved into a top-tier drift competitor for D1GP. By Brian English // Photos by Robert Choo and Richard Fong 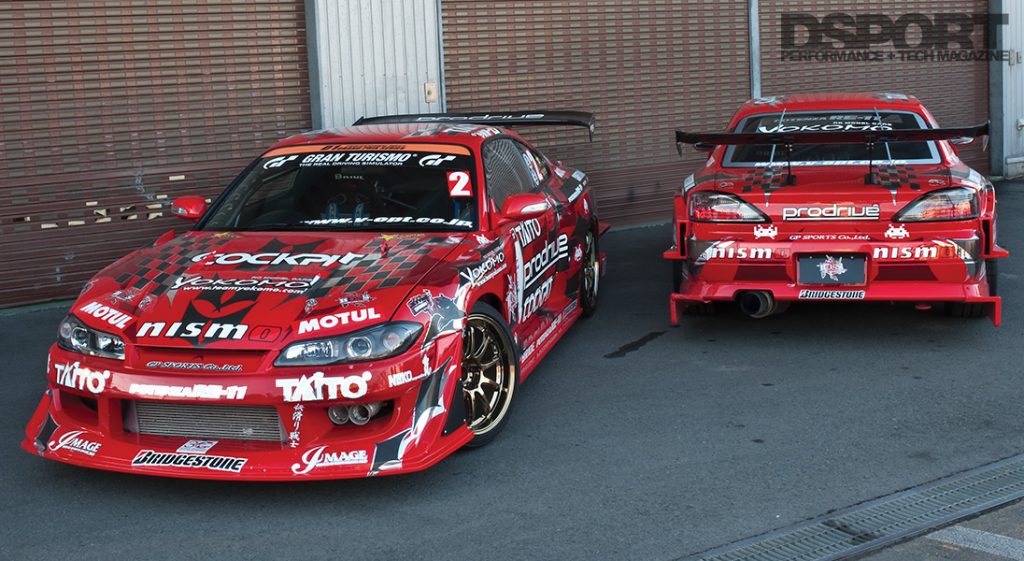 550 horsepower from a 480-horsepower turbocharger?

No matter how much fuel is pumped into an engine, it must have a proportional amount of oxygen in order to burn completely. Otherwise, raw fuel is simply wasted as it passes through the cylinder unused. This is why simply installing bigger fuel injectors does not produce more power unless more air is introduced to the mixture as well. So how is it possible for a turbocharged engine to produce more horsepower than the turbo’s airflow can support? Add nitrous oxide. Nitrous oxide is an oxidizer, made up of two-parts nitrogen and one-part oxygen. While the turbocharger’s airflow is maxed out, the introduction of nitrous oxide into the combustion mixture effectively increases the amount of oxygen available to burn and thus makes more power. While the NISMO stroker engine offered greater potential than the factory SR20DET, AP Boss concluded that building the engine a few steps further would be necessary for its drifting objectives. The block received a set of HKS sleeves bored out 1mm by Nagoya Precision (NAPREC). AP Boss then replaced the rotating assembly with BC Brian Crower (BC) components. A billet-steel crankshaft connects to 8.5:1 compression pistons by way of BC 625+ connecting rods. The cylinder head contains HKS stainless-steel valves, valve springs and titanium retainers, helping prevent mechanical failure due to high-RPM stress. A pair of HKS camshafts modulate the valvetrain, increasing the valve event duration and lift for greater airflow through the cylinders. 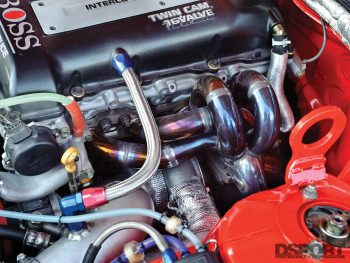 With the engine capable of flowing a greater volume of air, AP Boss needed a turbocharger capable of force-feeding the cylinders efficiently. An HKS GT3037 Pro S turbocharger bolts to the T3 flange of an AP Boss equal-length exhaust manifold. High-enthalpy gasses spin the turbine wheel before exiting through an AP Boss exhaust system. On the cool side, pressurized air from the compressor flows through an HKS intercooler to reject heat before entering the Pulsar N15 70mm throttle body and AP Boss intake manifold. A quartet of AP Boss LAP 850 cc/min fuel injectors plumb into the manifold, spraying the air charge with 100-octane fuel. The injectors receive fuel from a SARD surge tank which prevents fuel starvation at the injectors when fuel sloshes away from the pump. Turning up the wick of the flame even more, a NOS 70-shot single nozzle wet fogger not only increases the peak horsepower, but also quickens the spool of the turbo. 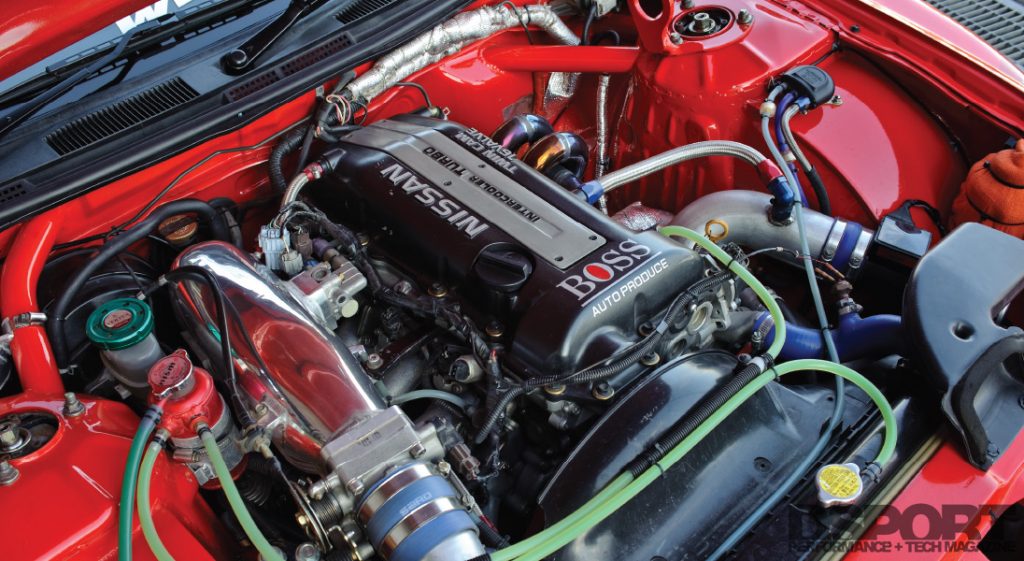 Controlling the fuel and ignition systems is an HKS F-CON V Pro engine management system while an EVC boost controller regulates the turbo to a peak of 21.3 psi of boost. AP Boss President Kazuhiro Fujioka tuned the system for optimum drift performance and squeezed out 548 whp on the Dynapack dynamometer. A lofty 523 lb-ft of torque at 4,650 RPM makes breaking traction and burning rubber an easy task for the drift car. The only remaining challenge at hand became getting the power to the ground.

Ducting in the bumper feeds cool air to the Blitz intake

Light Up the Tires

More than double the factory torque output required an equal increase in clutch capacity. Bolted to the back of the crankshaft is a NISMO Super Coppermix Twin-plate clutch. The clutch transfers power from the engine to an HKS 6-speed sequential transmission. Using a sequential transmission allows the driver to remain on the gas and not engage the clutch during up shifts, eliminating power upsets at the wheels during gear changes. The transmission then transmits power to a NISMO GT Pro R200 LSD. The differential splits power to the R33 GT-R rear axles and Prodrive GC-10 wheels. When initiating a drift and locking the tires is required, Project Mu Slim Forged Sports Calipers put the squeeze on two-piece rotors in the rear while the front relies on R33 GT-R calipers and rotors. The rear calipers feature a 4-piston, 4- pad design that allows the regular foot brake and hydraulic hand brake to share one lightweight caliper. Keeping the tires planted firmly on the ground and lowering the chassis is a set of DG-5 coilovers with Swift Springs. A reinforced subframe and AP Boss custom linkage arms complement the stiffened suspension, ensuring the Silvia goes where the driver points it. 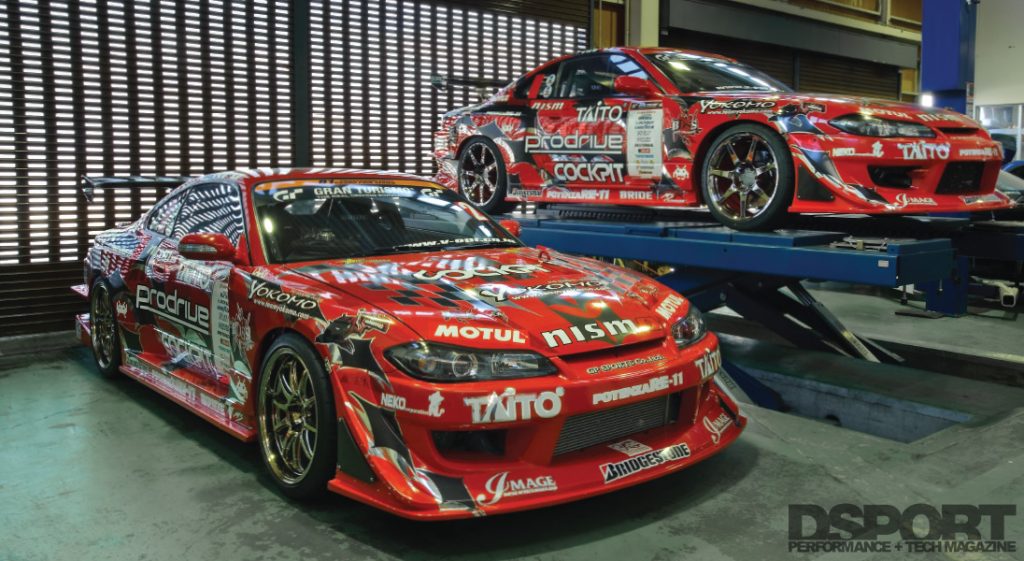 So Good, Back For Seconds 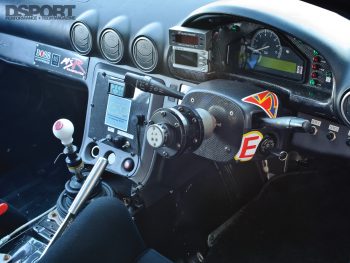 When AP Boss first received the NISMO car, a spare NISMO 2.2-liter motor and 6-speed transmission were included. After the successful transformation of the original NISMO demo car into a potent drift machine, AP Boss figured it would put the spares to good use. AP Boss built a back-up car nearly identical to the original. While the second car is sent out for any overseas exhibitions, the original is used to compete in Japan’s D1GP. Piloted by Youichi Imamura, the AP Boss Silvia captured the 2009 D1GP Championship. For 2010, the S15 continues its campaign in D1GP. AP Boss plans to continue enhancing the vehicle with its newly released DDSTAR turbo kit developed around the HKS T04Z turbocharger. The prospect of a turbo capable of generating 200 additional horsepower means that we’ll definitely have to keep an eye on this S15.