Make no mistake that the jury is still out on drifting. Despite a great deal of press and manufacturer support, the future of the “sport” remains uncertain. While drift series may currently be in the headlines, the reality is that import drag racing is still the number one motorsport for our import culture according to two separate surveys. So why is there a dedicated drift car on the cover of DSport? Rest assured that we’re not just latecomers on the drifting wagon. Our attention was peaked when we learned of the story behind this car. If you are a fan of underdog success stories then read on. Photos by Michael Ferrara Staff Report 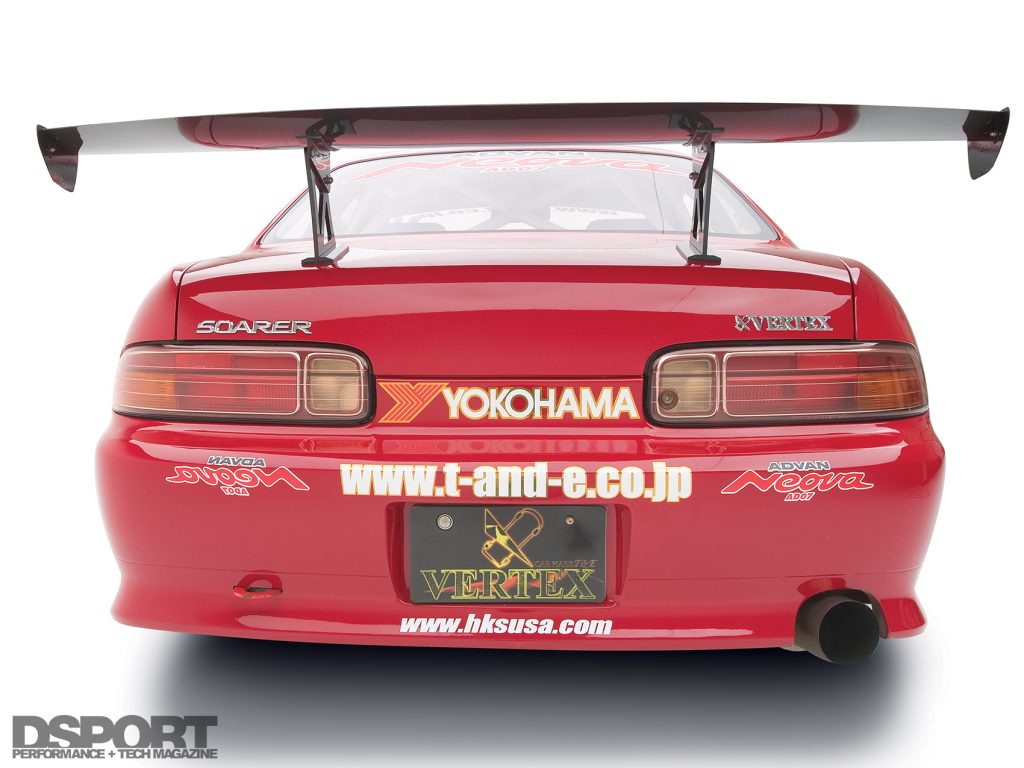 In October of 1996, Takahiro Ueno and his brother established Car Make T&E (The “T” representing “Technical” and the “E” standing for “Elegant”). Challenged by a lack of capital, the two worked hard through the early years where each year looked like it could be the last for the company. Fueled at times by nothing but pure passion, the company would struggle. Hard work and a relentless pursuit of achievement was the fuel that helped Car Make T&E get to the finish line in the race to become a successful business. Today, Car Make T&E and the Vertex product line have allowed the company to become one of the most successful in their category. While building the company, Takahiro’s participation in drifting would elevate the shops notoriety and begin to expand their customer base. While many tuners in Japan would focus on GT-Rs, S15s, RX-7s and Supras, Ueno would center on the Toyota Soarer. His fondness for the Toyota Soarer would translate into times when multiple examples overflowed from his shop out into his parking lot. For those unfamiliar with the Soarer platform, the vehicle is essentially a Lexus SC300 powered by a 1JZ-GTE 2.5-liter, twin turbo instead of the naturally- aspirated 2JZ-GE 3.0-liter that we receive in the States. 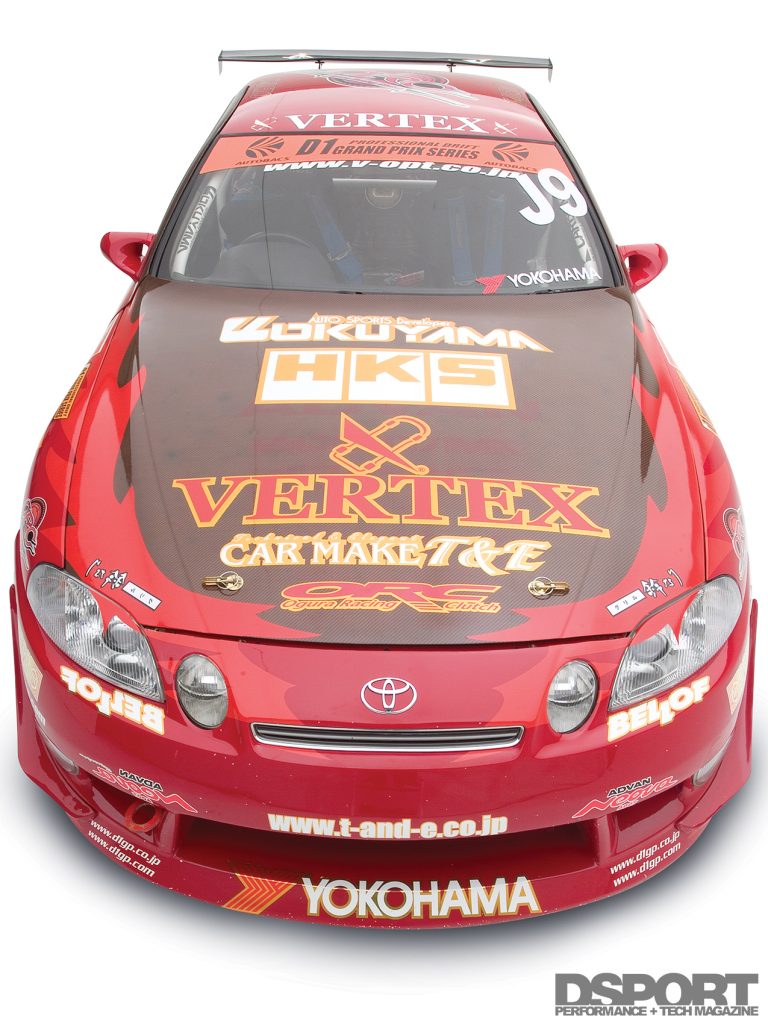 Everyone seems to know about the tremendous power potential of Toyota’s 2JZ-GTE engine (the Supra engine). This 3.0-liter, inline six cylinder has proven itself to not only be capable of tremendous power output, but to also be extremely reliable. Stories of 800-plus wheel horsepower, stock-block 2JZs can be found at websites and forums across the internet. The bad news is that not everyone has an extra $25,000 lying around to pick up a used Toyota Supra turbo to experience the magic of the 2JZ-GTE. Since only a limited number of Toyota Supra turbos were sold in the U.S., the scarcity of the vehicles has kept the pricing high. Finding a non-turbo example is quite a bit easier. However, finding a complete clip for the non- turbo to turbo swap isn’t easy or cheap. Non-turbo Supra, SC300 and GS300 owners looking for big performance seem to be waiting in line for 2JZ turbo swaps. In Japan, a number of Toyota creations are powered by a 1JZ-GTE powerplant. This engine is a 2.5-liter in-line six cylinder that is twin- turbocharged from the factory. Carrying the same bore size as the 2JZ-GTE (86mm), the stroke of the 1JZ engine is just 71.5mm. These specs are almost identical to the RB25 Nissan engine. Sporting the Japanese-mandated 280 horsepower (@ 6200rpm), the 1JZ- GTE can easily be tuned to the 350 horsepower range with bolt ons and the stock turbos. With a responsive and highly-streetable single turbo upgrade 450 to 500 horsepower can be achieved. 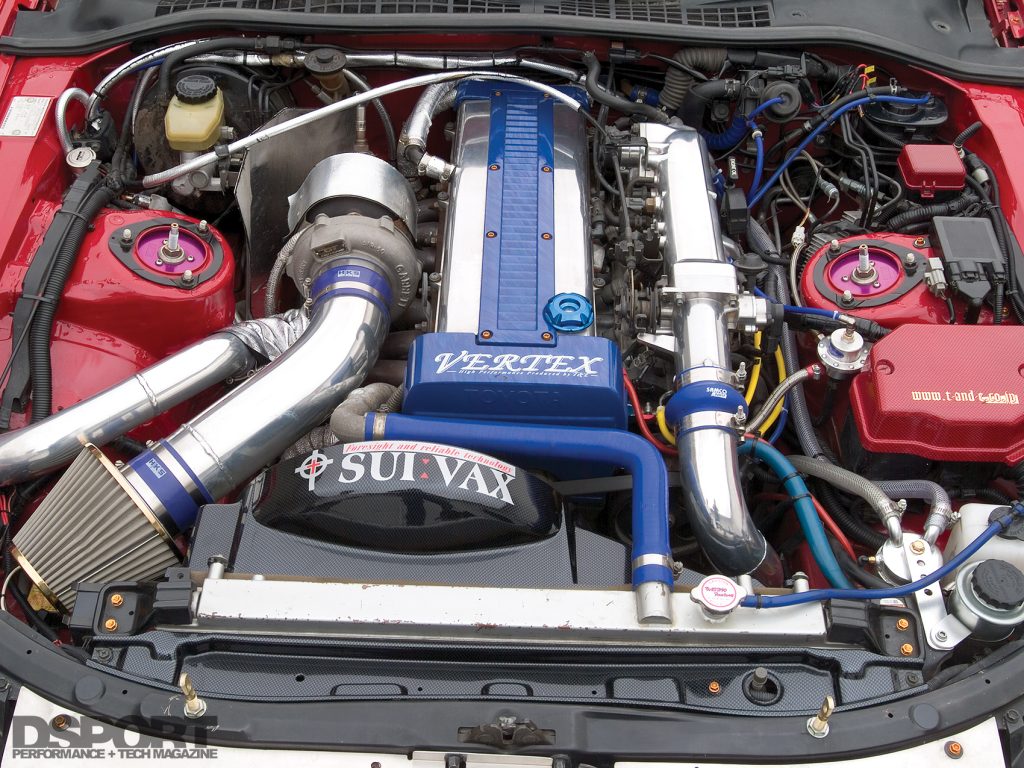 Since 500 wheel horsepower was the target for this Soarer, there was no need to address the short block of the 1JZ. Instead, attention was put on the right mixture of bolt-on parts that could produce 490 horsepower while still maintaining excellent boost response. To ensure a good seal between the top and bottom halves of the engine, an HKS 1.2mm head gasket was selected. In the head, the factory bumpsticks were replaced by a 264/264 combination of HKS camshafts. The camshafts were setup with matched valve springs from HKS. The rest of the long block remained untouched. 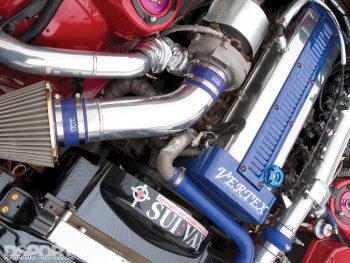 To pressurize the intake, Ueno opted for an HKS GT3037S single turbo setup. This system uses ball- bearing technology to improve boost response. Response is also maximized thanks to the addition of an HKS racing wastegate and HKS EVC boost controller. Controlling the fuel delivery is a Car Mate T&E tuned HKS FCON-V Pro. Up front, an HKS S-type intercooler was chosen to keep the charge air cooled. The bottom line is 490 wheel horsepower at 1.45 kg/cm2 of boost pressure (20.5psi). Power makes its way to the driveline through an Ogura Racing Clutch (ORC) twin-disc. At the rear, an ATS LSD ensures that both of the 18×10 Volk Racing GT-C wheels receive equal shares of the power. 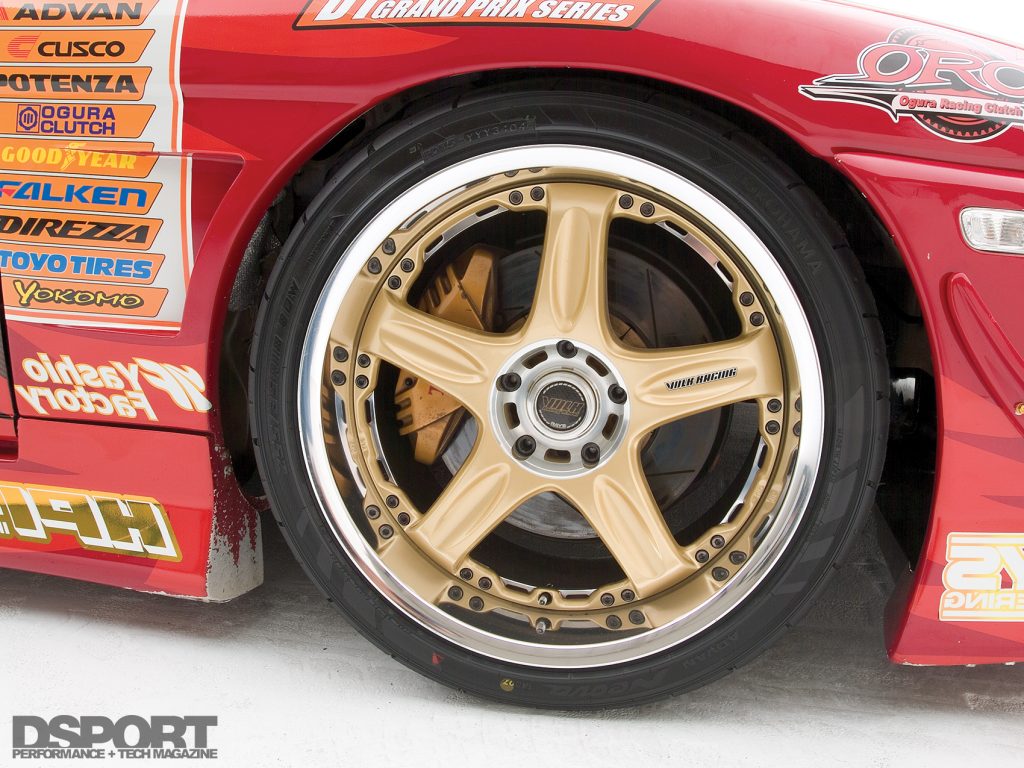 A capable drift vehicle must offer predictable control. While it may look like cars are out of control during a drift, the reality is that the driver and vehicle are working in unison to choose a line that must be followed without the advantage of grip. So how can you maximize a vehicle’s predictability? For starters, eliminating chassis flex allows the suspension to do its job. To keep chassis flex to a minimum, Okuyama (one of Japan’s leading competition car builders) was called upon to strengthen the skeleton. A Carbing Roll cage was installed and chassis flex is now just a memory from the past. 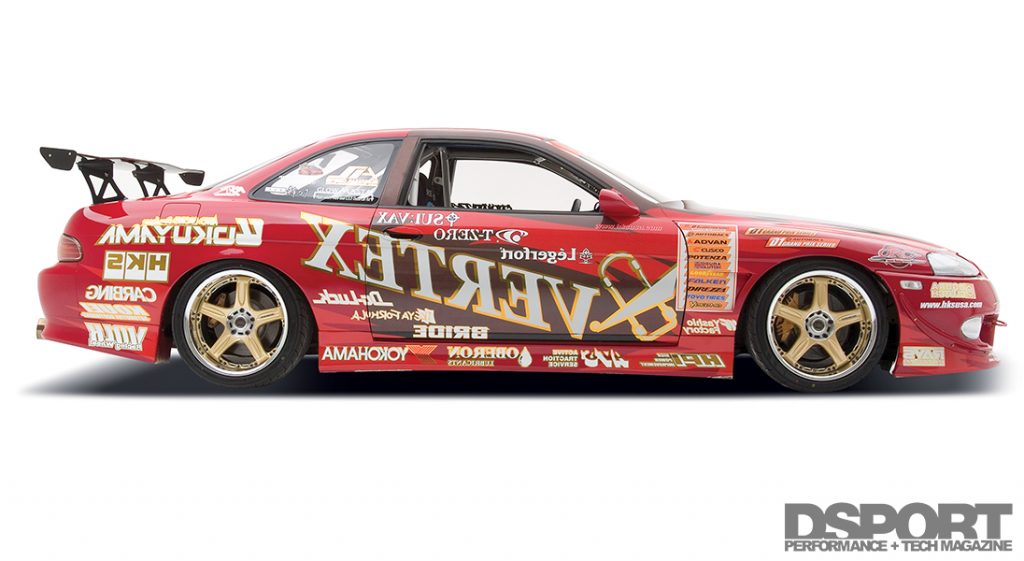 With a solid foundation in place, the HKS Hipermax suspension allows the suspension to follow the bumps. A set of Do-luck sway bars keep body roll to a minimum while T-Zero brake pads work with the Supra JZA80 brakes at all four corners to provide the stop. Ueno has already made a name for himself as one of the top D1 drivers. This notoriety has helped build and expand Car Make T&E. Recently a new division named Sui Vax was added to the Car Make T&E family. This division centers on performance tuning and the Motorsports competition that helped bring notoriety to the once unknown tuner. Isn’t it good to know that passion, persistence and hard work can redeem.