In 1990, Acura took a chance on a new design, platform, and idea called the NSX. The result was a mid-engine supercar that lives on as one of the best looking vehicles ever produced. While people always mistook it for a Ferrari, the NSX’s naturally-aspirated V6 only delivered 270 horsepower and 210 lb-ft of torque. Although this was respectable performance in the early ‘90s, it still didn’t match the looks and concept of the NSX. Enthusiasts called for a turbocharger or a supercharger, but the answer to forced-induction didn’t come until much later with the new generation of NSX, which carried with it a $150,000+ price tag that most people can’t afford. While most enthusiasts tend to hold back on upgrades given the rarity of the NSX, Alex Seto decided to change the past and build his NSX the way it should’ve been built in the first place. 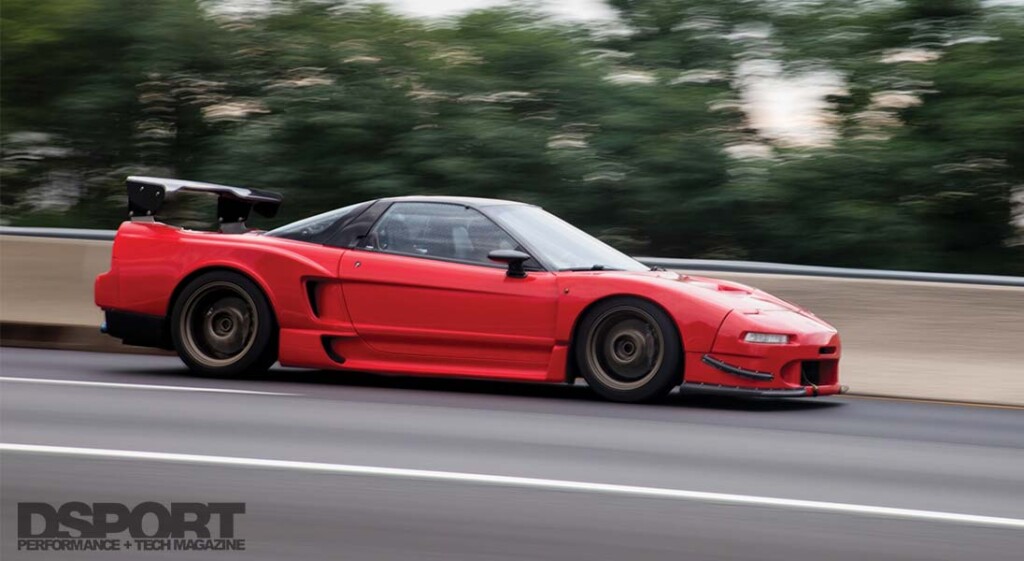 In 2016, Alex Seto was seeking his very own Acura NSX that he would import from Canada to the United States. “Cars have to be twenty-five years old by the month to be allowed into the United States without restrictions, so I had to wait until June before the car was shipped,” said Alex Seto. The right time finally arrived and Alex purchased this Acura NSX from Canada sight unseen. Upon arriving to New Jersey where Alex resides, he knew that the wait was worth it. The Acura came already equipped with a Taitec widebody kit, a GruppeM supercharger, Carbing roll cage, and TE37 wheels. While it seems like most of the work was already done for Alex, he had other plans for the vehicle, and it was time he got to work and made this one his own, unique NSX.

Konig Hypergram wheels with Hankook R-S3 tires outfit all four corners of the Acura NSX. With the increase in power through the custom supercharger, 285 tires in the rear help keep that power to the road.

“I love the NSX platform and its aftermarket potential,” said Alex. With the mentality of upgrading the car, Seto knew exactly what he wanted from the start. He chose this 1991 specifically because it came with a hardtop instead of the targa top, which increased the chassis rigidity to allow him to push the power more without sacrificing handling. Upon acquiring the NSX, Alex loved everything about it. It had the original ivory interior, but he wanted a black interior instead. Aside from the interior, the NSX had some worn out trim pieces that needed replacing. Just like that, problems were pointed out and it was time Alex made a plan and started working on it. 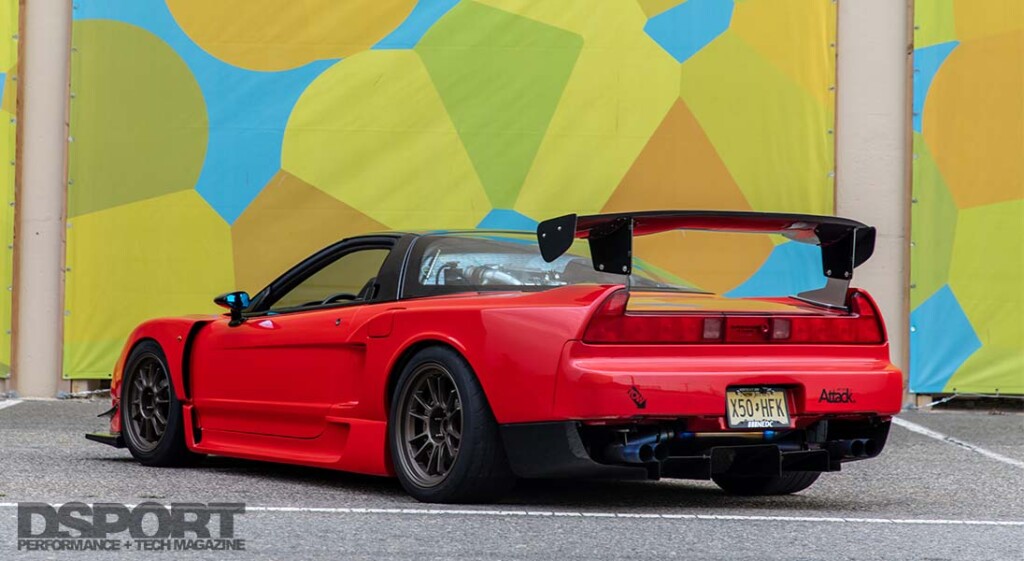 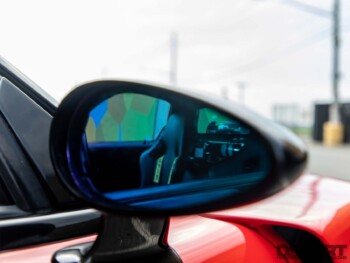 The goal for Alex Seto was to build a reliable track vehicle that is a comfortable street car. This means great handling, instant throttle response, and durability. Alex didn’t want to lose the NSX flavor offered by its naturally-aspirated V6 engine, but the supercharger allowed him to keep a flat curve throughout the entire RPM range while having immediate response that gets him out of corners quickly and keep him smiling on the streets. To keep it comfortable on the street, Alex left the air conditioner and the full stereo system with Bluetooth. “Originally, the car was supposed to get a mild rebuild and refresh, but that snowballed into a new OEM 6-speed transmission, NA2 ABS upgrade, a custom supercharger, a custom intercooler, and a lot more,” said Alex. 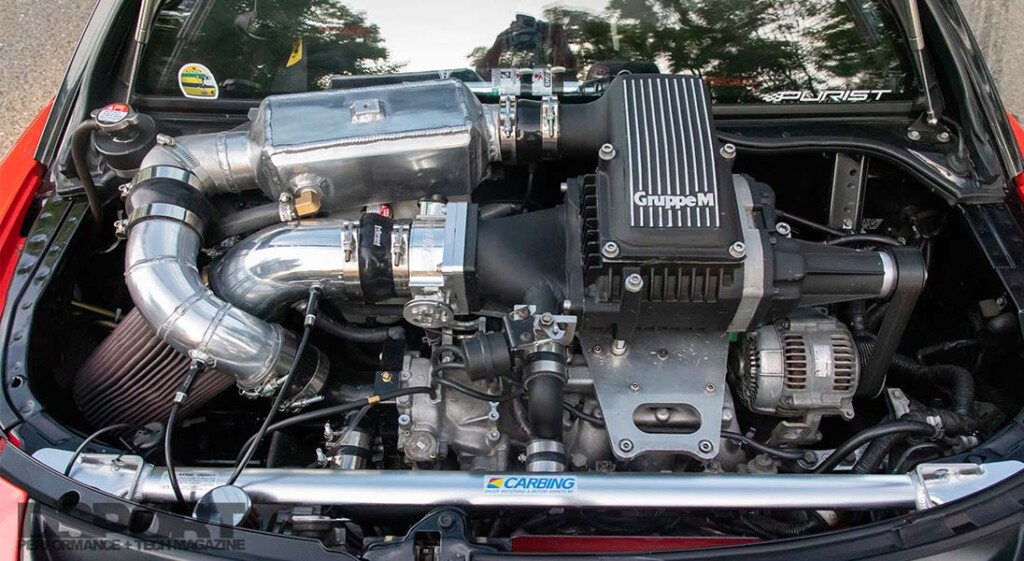 Alex wanted to maximize the power of the GruppeM supercharger, so he upgraded it with a larger Magnum Powers MPX housing. To keep the charged air cool, he installed a custom water-to-air intercooler setup that he specifically designed for this vehicle. “The blower can add over 200-degrees of heat to the charged air, so cooling is sorely needed,” said Alex. In addition to the intercooler keeping the intake temperature down to 30-degrees, Alex added an AEM water/meth injection to cool the intake charge even further. “The result is probably the coolest running GruppeM supercharged NSX on the road.”

The engine build, tuning, and fabrication were all done by Bradley Mechanical and Design. Keeping the displacement and most of the internals to the factory specs, the upgraded GruppeM with the Magnum Powers MPX case was tuned for 8 psi of boost. An Aeromotive 340 Stealth fuel pump feeds DeatschWerks 750cc fuel injectors with 93-octane fuel. To bring everything together and maximize the tune, an AEM Infinity became the brains for the vehicle. The result is 376whp and 277 lb-ft on pump gas. Putting this vehicle on E85 ethanol/gasoline mixture would take it to an entirely new level, but with the stock block, the team wanted to keep it reliable and fun. With the NSX weighing just 2,900-pounds and making significantly more power, all while delivering an instant and consistent power curve, Alex Seto accomplished his goal of building a great and reliable street and track car. 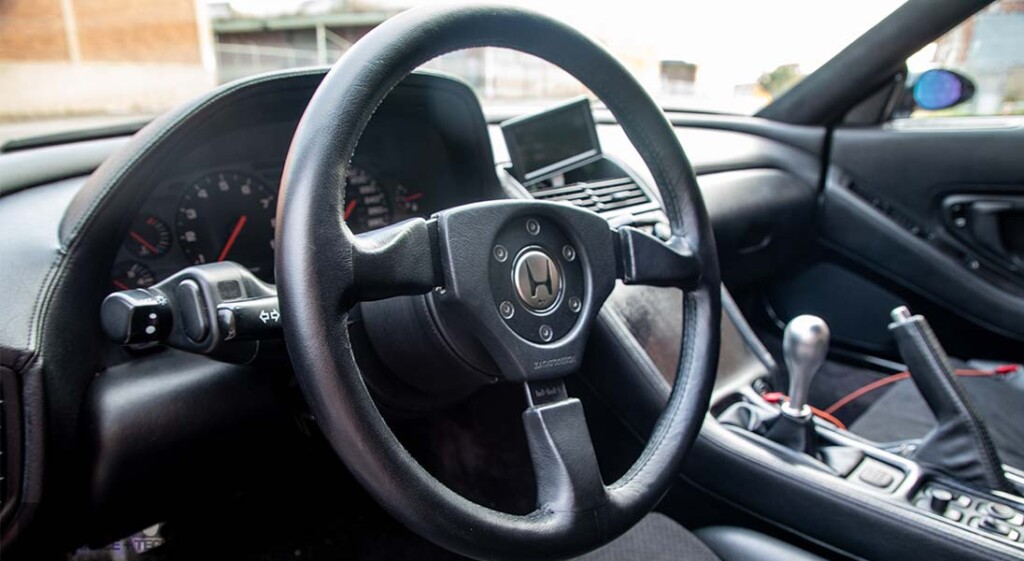 “It was a long process with many delays,” said Alex. “The end result was worth the wait. I plan to enjoy the car for many years to come.” Alex has put so much into the vehicle, from time and money, to engineering and planning. While he hasn’t competed with the NSX yet, Alex has every intention of putting it to the test to see how his work translates on the track. With this current setup, it’s hard to believe he will ever experience heat soaking. This means he should be getting maximum power on the track lap after lap. The plan is to track and autocross it, while enjoying weekend cruises and mountain runs. “I am done modifying it, but we all know how that goes,” said Alex. Alex knows the reality of being a car enthusiast, which means the power bug will always nag on him and he will find himself upgrading the NSX year after year. “The build was such a satisfying experience. If anyone is on the fence about building their own vision, don’t wait, because there will be delays.” Whatever car you choose to build, the best time to do it is now. Anticipate the delays, know there will be struggles, but most importantly, enjoy every moment before it’s done – or is it ever actually done?