Your childhood plays a major role in your present, dreams, and goals. For car enthusiasts, the love is usually sparked from a movie or a show that featured a specific vehicle. Fast and Furious fans grew up loving GT-Rs, Steve McQueen fans would kill for a ’68 Mustang similar to the one in the movie Bullitt, and some even grew up wanting a DeLorean for some reason. For Mike Ghadimi, his love for cars didn’t come from a fictional film, instead, Option and Spoon videos were responsible for embedding the Honda Civic EG deep in his heart. After seeing them race on the tracks of Japan and display the performance hidden in import cars, Mike was on a mission to own one of his own. 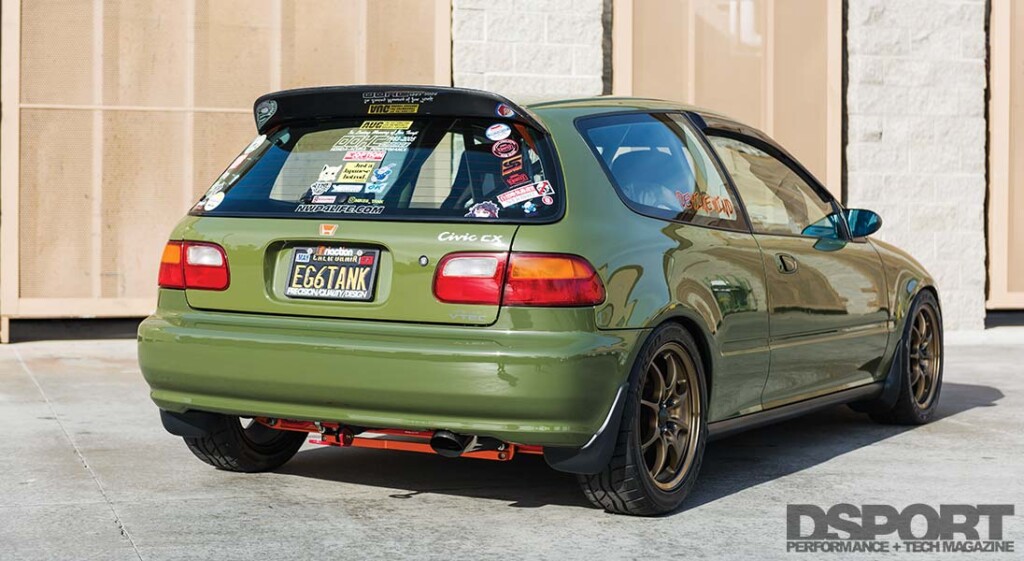 In 2002, an opportunity presented itself when Mike’s co-worker decided to sell his 1992 Honda Civic CX. The car was completely stock in a factory red paint. “I have always been obsessed with the EG chassis since back in the day reading Hyper Rev magazine and watching old school Option and Spoon videos,” said Mike. The Civic EG represented much more than just a way of transportation. To Mike, this was a potential-filled opportunity of owning a legend; however, the legend was in disguise at the time. It was time Mike got behind the wheel and assessed his purchase to see what the plan will be for the EG. 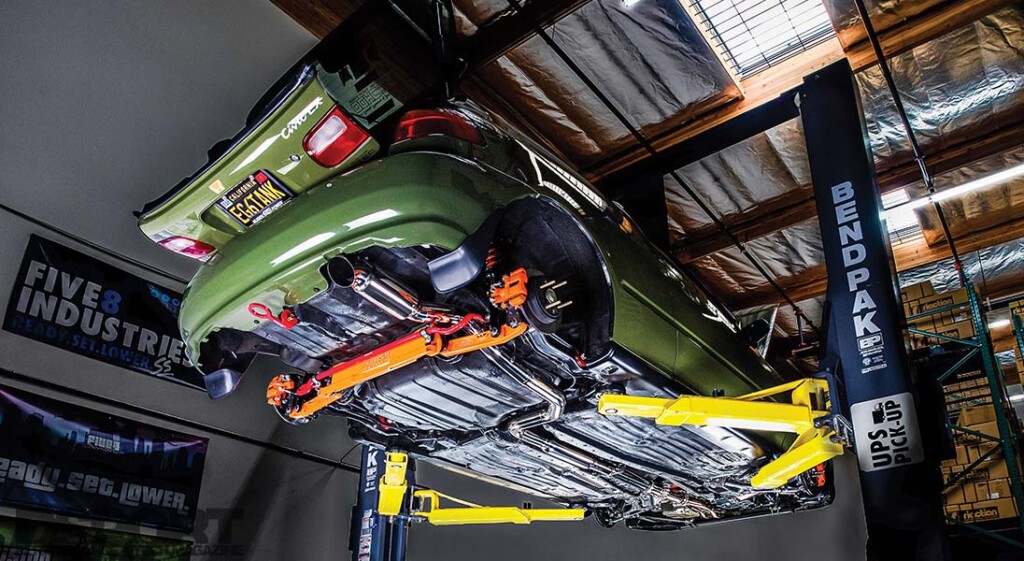 We can dream all we want, but the reality doesn’t change. When Mike got behind the wheel of his dream car, his first reaction was “this is slow.” Of course, he knew that it will take a lot of work to get it to be on par with some of the Civics he used to watch on the Japanese race tracks, but the reality was a bit slower than he thought. “It also didn’t have much options, like power windows and power mirrors since I was used to daily a 1998 GSR with all of the options,” said Mike. Aside from being slow and lacking tons of options, Mike was grateful it had air conditioning that worked properly. The car was fun, but not nearly as fun as he wanted it to be. It was time Mike came up with a plan to make this car as good as the ones he built in his head over and over. 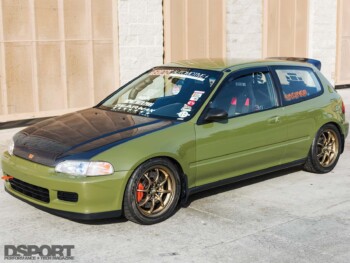 “I wanted to build the Civic EG in a way that represents me and my style,” said Mike. He wanted to give it a unique color and nickname it “The Tank.” His plans also included being original. “I always made sure not to follow all of the cookie cutter trends, so I tried to run a lot of one-off, custom parts that you wouldn’t always see on an EG.” This meant Mike had to reach out to all of his connection to find fabricators willing to do custom parts and help build the personality of The Tank to make it a truly unique build. There are tons of EG builds out there, which meant the challenge was real. The challenge was set, but the goal was yet to be determined.

“My car was initially built to be a drag car,” said Mike. The original goal was to deliver 500whp, and that goal was achieved in 2005 with the use of a turbocharger. “After my oil pump blew up and ended up destroying my bottom-end, I decided to go back to all-motor.” The goal changed from trying to reach a high horsepower number to building a nice, healthy, and reliable setup. “My goal became to always have a fun and powerful street car that I could jump in and enjoy long drives without any issues,” said Mike. With the current all-motor setup on the B18 engine, Mike was able to race the EG on FF Battle, going to car shows and meets, as well as enjoy the car without any issues. Being able to do that required tons of work, change of setups, and a few swaps in the process. 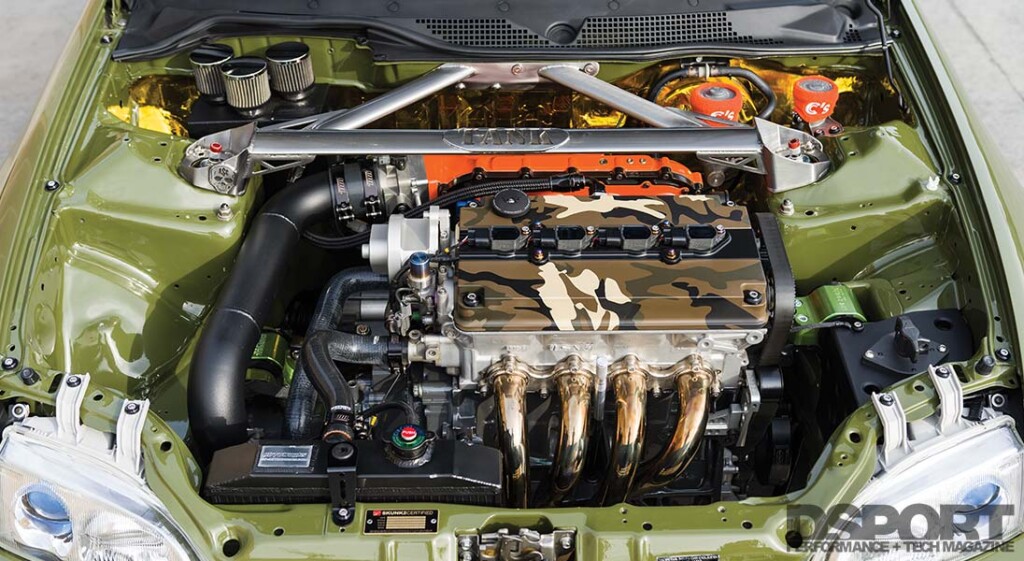 The original setup was a B16 swap with just some bolt-on upgrades. When Mike decided to go the turbocharger route, he switched to a GSR engine with low-compression pistons. On that setup, the car made 290whp at 7 psi of boost. After a while, Mike changed to a custom top-mount turbocharger with an upgraded intercooler and the same Precision SC34 turbocharger from the previous setup. The new setup made 350whp at 11 psi of boost. From there, Mike stepped it up with a Full Race kit with a ram-horn manifold and a Garrett GT35R turbocharger that made 477whp at 17 psi of boost. The decision to go back to a naturally-aspirated engine was made and the sleeved B18 engine now delivers 243whp and 180 lb-ft of torque on 91 pump gas. 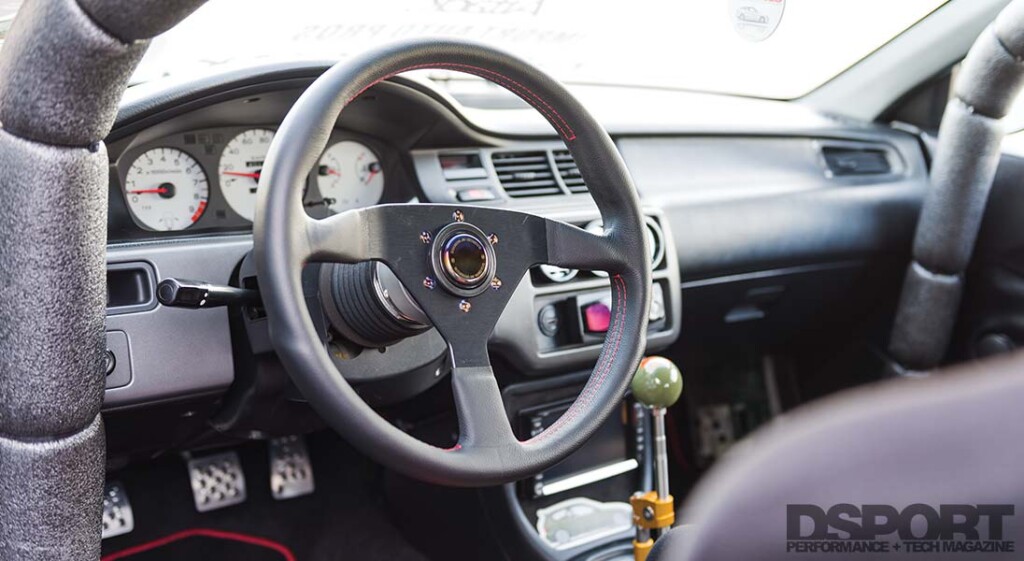 “The worst moment in the entire build was when my oil pump blew up and destroyed my engine,” said Mike. After this hit, the EG sat for four years with plans for retirement. Inspired by his son, Kenji, Mike decided to push through and give the EG another chance. The bad was accompanied by good, like each time Mike strapped the car up on the dyno and saw his hard work translate into power and come to fruition. “It always felt amazing to see it go from a stock CX that I bought back in 2002 to where it’s at after all of these years.” Mike went on to race in FF Battle against other Hondas and recreate what he dreamt of years ago. Mike also went on to win many awards for The Tank. 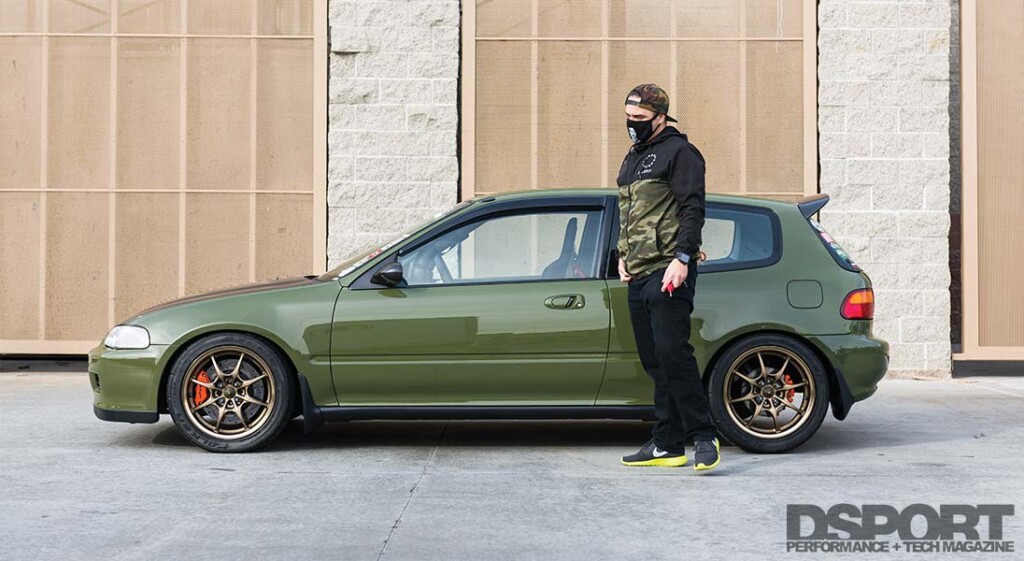 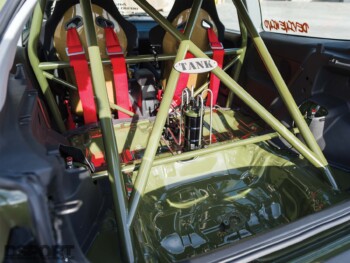 The Tank is finally living its best life. “If I had to do it again, I would’ve ran my cage through the dash and kept my AC system,” said Mike. A small sacrifice for owning such a well-built EG. Mike experienced the EG with a turbocharger and naturally-aspirated, but he has yet to try a supercharger. “I would love to experience that feeling of boost again, this time with a supercharger.” In the meantime, he intends on racing and showing the car while enjoying the process. “I would like to tell the readers to always build a car for yourself and build it the way you want – don’t let other’s opinions discourage you from achieving your visions and goals,” Mike concluded. If you’re building a car, enjoy the journey and most importantly, get back up when you fall no matter how many times it happens, because the result could be The Tank.