Low key, streetable, unassuming. These traits exemplify the sleepers on the street. Taking on a no nonsense approach to tuning can sometimes make the difference when sizing up a contender or flying under the law-enforcement radar. Brian Jeffords adopted the mantra “If it ain’t broke, don’t fix it” mentality early on when he first got into cars. He left the world of American iron for the Japanese all-wheel drive party when the Mitsubishi Evolution VIII came to the market. He could not believe the amount of power that could be generated from a four-cylinder engine. When the EVO IX was released, Brian traded up to the last generation of the CT9A. While maintaining a low key, Brian aimed for maximum horsepower on the alternative fuel, ethanol E85. Text and Photos by Richard Fong DSPORT Issue #87 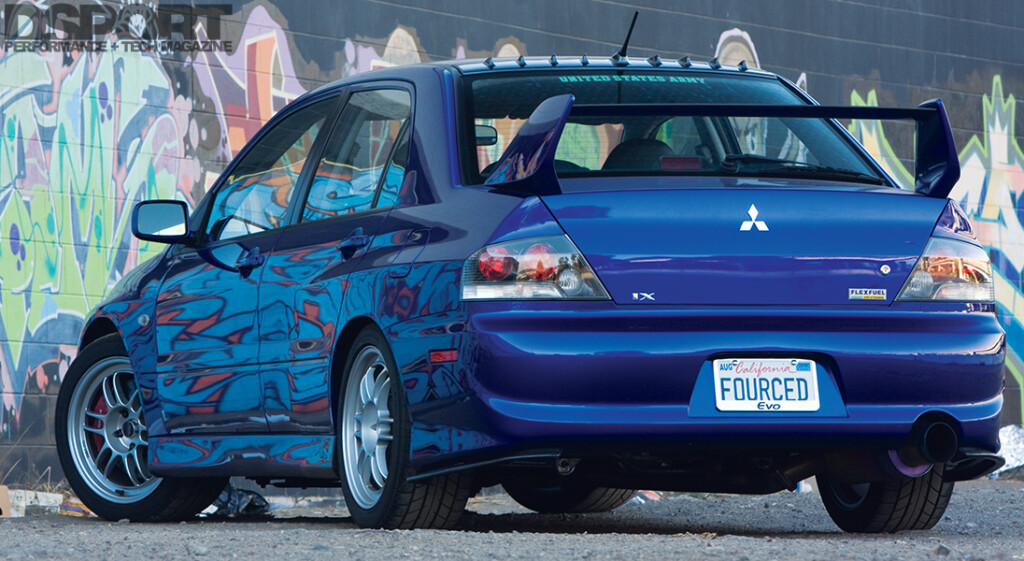 One look at the engine bay and the casual onlooker will pass this EVO up as unmodified. A significant amount of time was invested into the appearance of the engine and the components of the engine bay. The MIVEC equipped 4G63 sitting in the engine bay is in fact a 2.3-liter stroker engine. Featuring 8.5:1 compression JE Pistons, BC Brian Crower connecting rods and a Mitsubishi 4G64 crankshaft, the reinforced shortblock received a displacement bump to 2,297cc. To take advantage of the increased displacement, additional airflow in and out of the engine required some cylinder head work. Supertech +1mm oversized valves backed by Supertech valve springs and titanium retainers increased the capacity of the ports and the volume of air flowing in and out of the cylinders. Cosworth M2 camshafts featuring 272-degrees duration with 11mm lift actuate the valvetrain and maximize the efficiency of the engine. 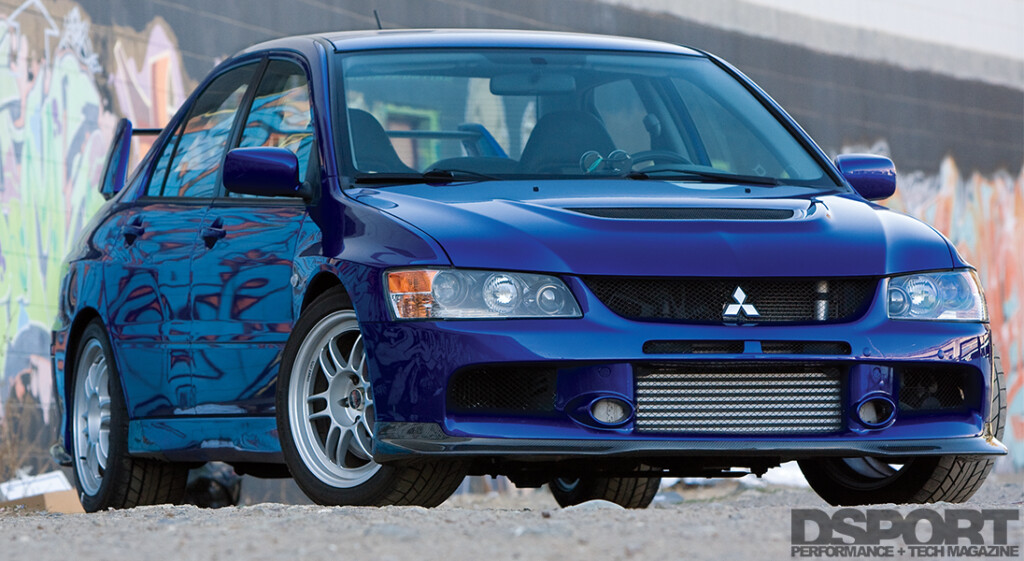 Strictly maintaining the stock appearance required the reuse of the factory turbo exhaust manifold. However, for improved performance, the manifold was ported to increase the volume of spent gasses reaching the turbine inlet of the specially-crafted turbocharger selected to provide boost pressure. This turbocharger, a Chad Block Research and Development (CBRD) prototype, employs a factor turbocharger frame. But CBRD worked its magic on the wheels and housings to deliver even greater performance from a seemingly stock turbocharger. Says Chad Block, “blah blah blah my turbocharger etc.” Factory intercooler piping joined the prototype turbocharger to the Perrin Performance front-mount intercooler and on to the Mil Spec 65mm throttle body. The larger throttle body was port matched to the stock intake manifold to smooth the flow of the aircharge passing the throttle plate into the plenum. A Synapse Engineering Synchronic blow-off valve releases boost pressure whenever the throttle plate is closed. 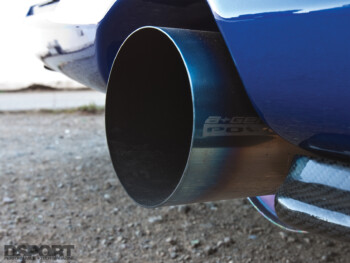 In order to make the most of the new engine and the potential horsepower gains of the engine and turbocharger, selecting an appropriate fuel became the next step. For daily driving, the benchmark but underperforming 91-octane pump gas was the only option given the out-of-reach pricing of race gasoline. But the release of ethanol E85 fuel at service stations had captured the attention of tuners nationwide. The popularity of E85 and its performance potential at a fraction of the cost of race fuel prompted Brian to consider making the change to ethanol. He took a good look at the benefits and made his move to flex fuel. To accommodate the delivery needs of E85, Brian upgraded his injectors to FIC Bluemax 1,550 cc/min fuel injectors backed by a Black Ops double-pump system. The increased fuel delivery provided the necessary volume that E85 requires for making horsepower. 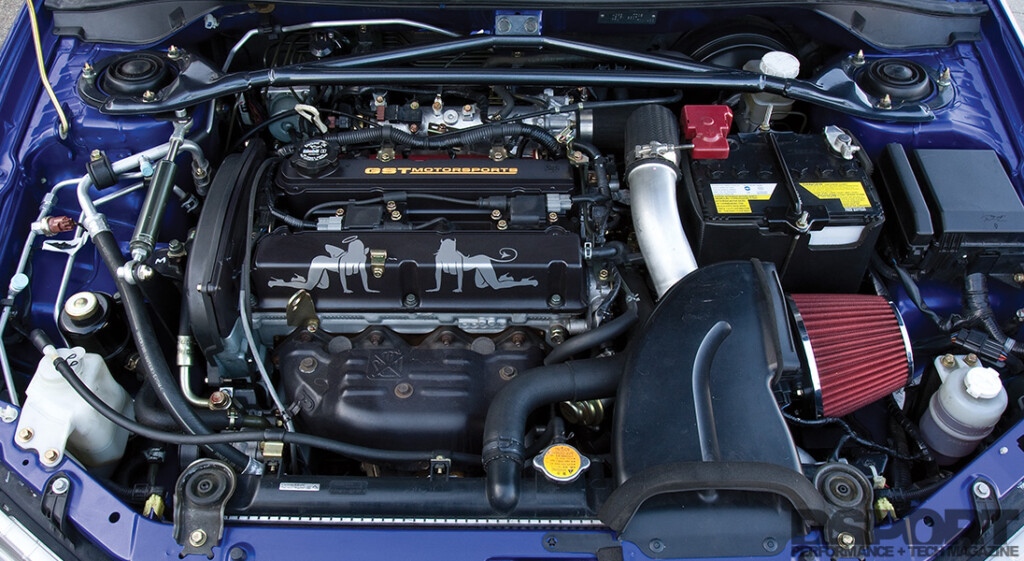 Minimal complexity was the focus of this build. Keeping to this objective, the factory ECU continued to serve in its engine management role. Bryan Medway of GST Motorsports utilized ECU Flash software to retune the fuel and ignition timing to accommodate E85. With the boost set to 32 psi and the ethanol flowing, the stroked 4G63 generated 476 horsepower and 464 lb-ft torque to the wheels on GST’s Mustang Dynamometer. 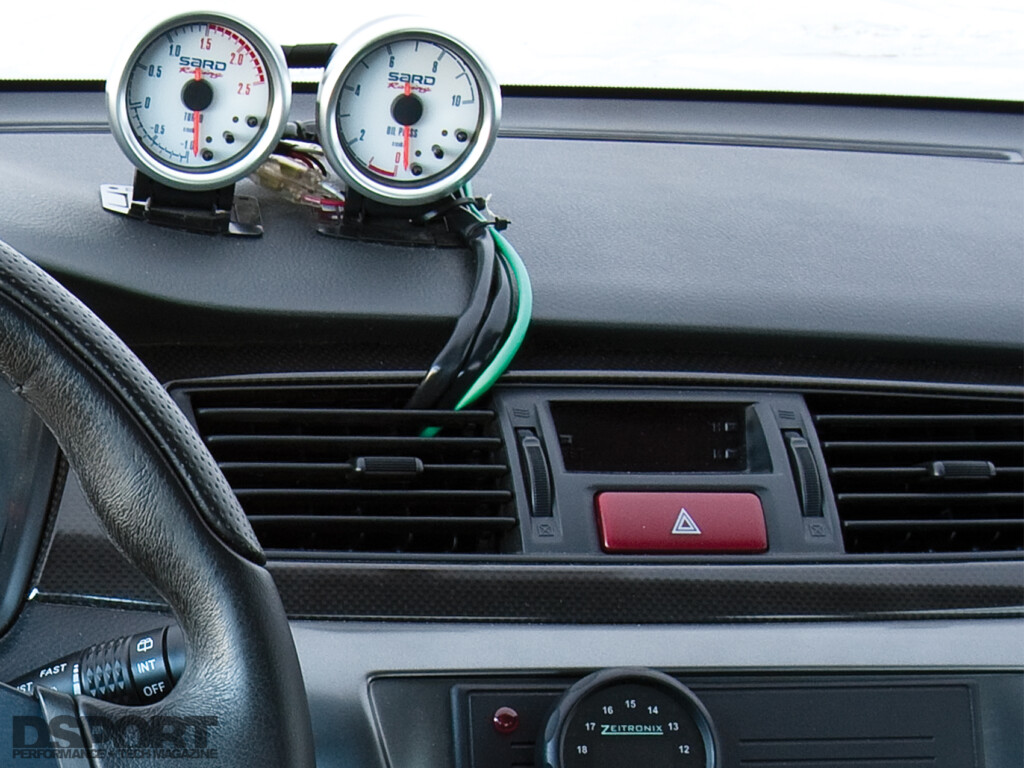 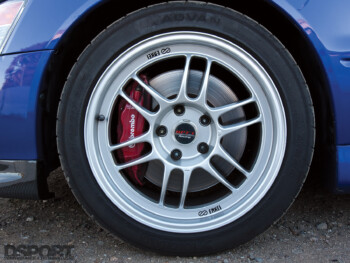 With plenty of power on tap, putting power down effectively became the next focus. Designed to work with the factory valving, Works Ride springs lowered chassis and center of gravity while providing a slightly stiffer ride for improved handling. Enkei RPF-1 wheels mounted with Yokohama Advan A046 tires provide the adhesion to keep the ponies on the pavement. 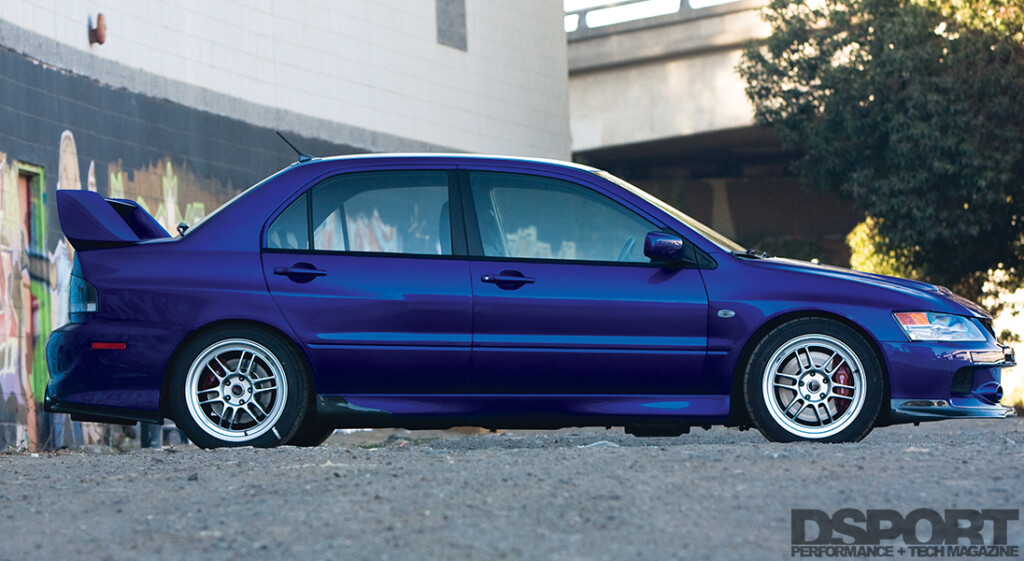 Brian states that being among the first few to make the conversion to E85 in the EVO community was a landmark achievement. Generating twice the factory horsepower with a stock-framed turbocharger on a Mustang dyno made the accomplishment all the sweeter. With E85 becoming more readily available in his area, expect to see Brian and his quiet cannon regulating on the street.