Although we as enthusiasts appreciate and enjoy the power capabilities of the acclaimed 2JZ-GTE platform, we also can’t deny that high horsepower JZA80 Supras are a dime a dozen. Pristine builds don’t seem to turn heads anymore unless the car cranks out more than 1,200whp. Even then, few make the effort to turn that power into anything but a quarter-mile burnout. Ken Miyazaki of Japan took a different approach with his 1998 Toyota Supra Turbo. Instead of aspiring to the many dyno queens in existence, he outfitted his JZA80 to turn fast laps on a road course. 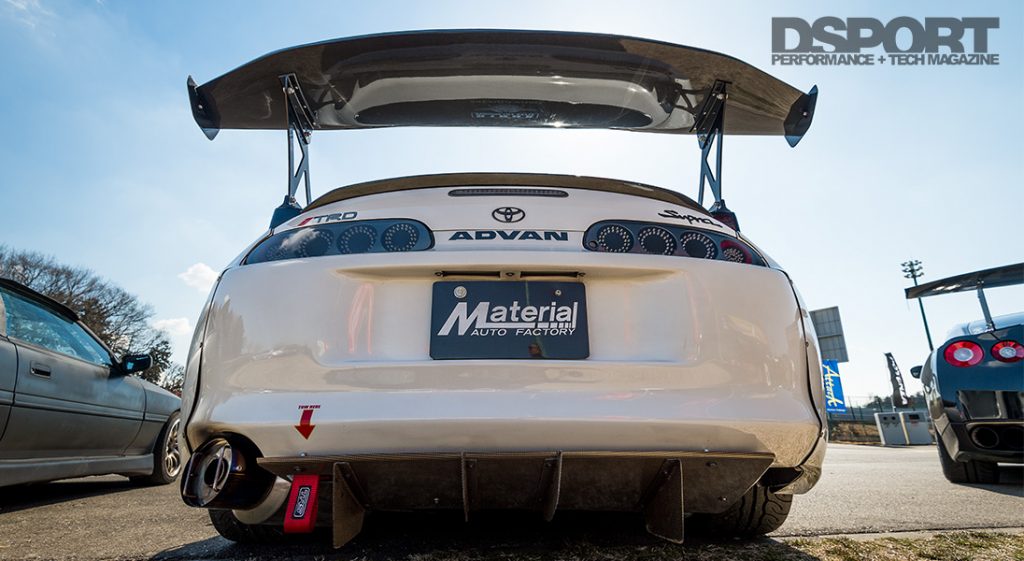 The scenic racing circuits of Japan would serve as the second home for Miyazaki’s JZA80, many of which offer longer straightaways and higher average speeds than many tracks found in the United States. To this end, the 2JZ-GTE power plant required a few upgrades to better pull through the faster track sections. Miyazaki turned to Material Auto Factory near Tokyo for help. 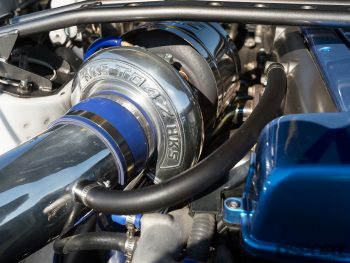 The 2JZ-GTE’s internals remain in the factory conversion, while an upgraded HKS T04Z turbocharger pumps forced air through the Blitz intercooler. An HKS EVC boost controller and HKS wastegate manage the turbocharger at 23.2psi of boost. In order to feed the additional air with the right mix and timing of fuel and spark, an HKS F-CON V Pro manages fuel delivery and engine electronics. The spent gases find their way out of the cylinders through an HKS exhaust manifold. Without even digging into the engine internals, the 2JZ-GTE was made capable of winding up to 8,000 RPM to produce an estimated 600 horsepower. It won’t break any records at the drag strips, but it serves plenty on a road course. 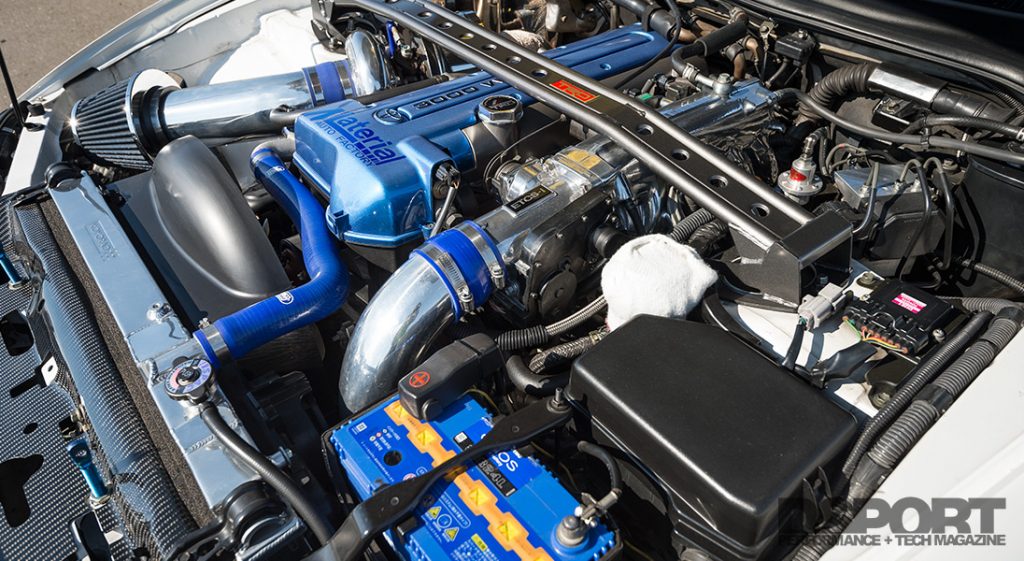 Gaining speed on the straightaways isn’t much use without the means to slow for the turns, especially on a 3,200 pound car. To this end, a set of Alcon/GREX front brake calipers clamp the Dixcel R Type pads onto the rotors. The braking system allows the front wheels to do most of the work, as the rear calipers remain factory but with a pair of Pro M HC+ pads.

Cornering ability serves as the primary goal of this JZA80, so wheel and tire choice determine the potential lap times. 18-inch Volk Racing TE37 wheels sit at the four corners, wrapped in Yokohama ADVAN Neova tires. This DOT tire offers soft compound rubber for extra grip while utilizing a tread pattern that makes it usable on the track and the street, whether it’s wet or dry. In the interest of maintaining a controllable balance of front and rear grip, 265/35R18 tires reside at the front end while 295/30R18 tires sit at the rear. 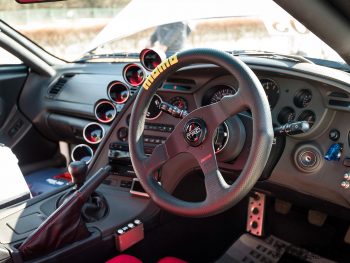 Road course racing and time attack calls for increased safety measures. In order to satisfy track requirements and improve overall safety of the car, a six-point roll bar fills out the interior. There’s room for both a driver and passenger as two Bride Zeta 2 seats sit in the cabin with Takata harnesses to hold its occupants in place. A MOMO Competition steering wheel sits at the driver’s hands, while a series of Defi gauges deliver vital information. 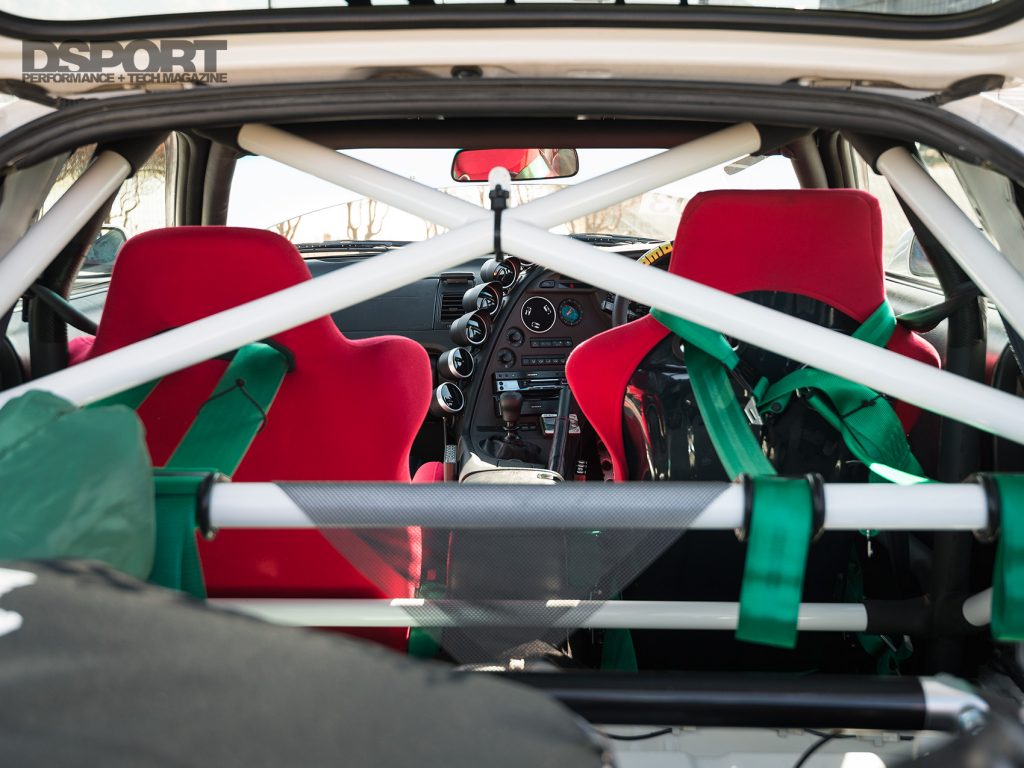 The outside of the car rings true to the theme of time attack racing, as a complete RIDOX body kit decorates the exterior. This includes the bumper, front fender panels, canards, side skirts, rear overfenders and rear diffuser. The new body pieces line the car with beautiful curves that serve in both form and function. The outside of the car is completed with a Top Secret hood and SARD GT-Wing Fuji 1800mm for enhanced downforce in the corners. 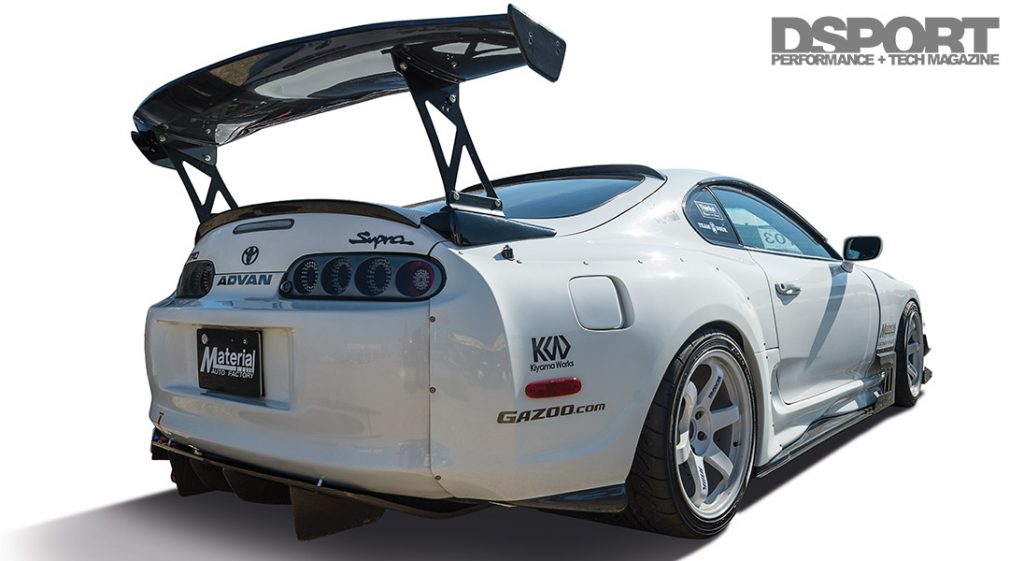 Miyazaki’s JZA80 Supra currently sits at 3,200 pounds with 600 horsepower, aggressive suspension and downforce at its disposal. While it doesn’t sport the same insane power numbers that other owners choose to employ, this build offers controllable power with a focus on outdoing the competition in the corners. We last spotted Miyazaki’s Supra at the 2017 Attack Maximum Challenge, and we look forward to seeing the car continue to make progress as it turns laps at full tilt.