There are few examples of the States getting a better version of a vehicle platform than the rest of the world. However, the first-generation (1G) and second-generation (2G) DSMs are an exception to the rule. While only FWD versions were available in Japan, AWD versions were available in the States. A cooperative effort between Chrysler and Mitsubishi produced the Eagle Talon TSi AWD, the Mitsubishi Eclipse GSX and Plymouth Laser RS Turbo AWDs. These legendary DSMs would not only introduce the States to the capabilities of turbocharged four-cylinders, but also to the extreme merits and challenges of an all-wheel-drive configuration. While we had the DSMs to hold us over between 1989 and 1998, Japan relied upon the Lancer Evolution platform to provide the thrills that a turbocharged 4G63 engine and AWD platform could provide. 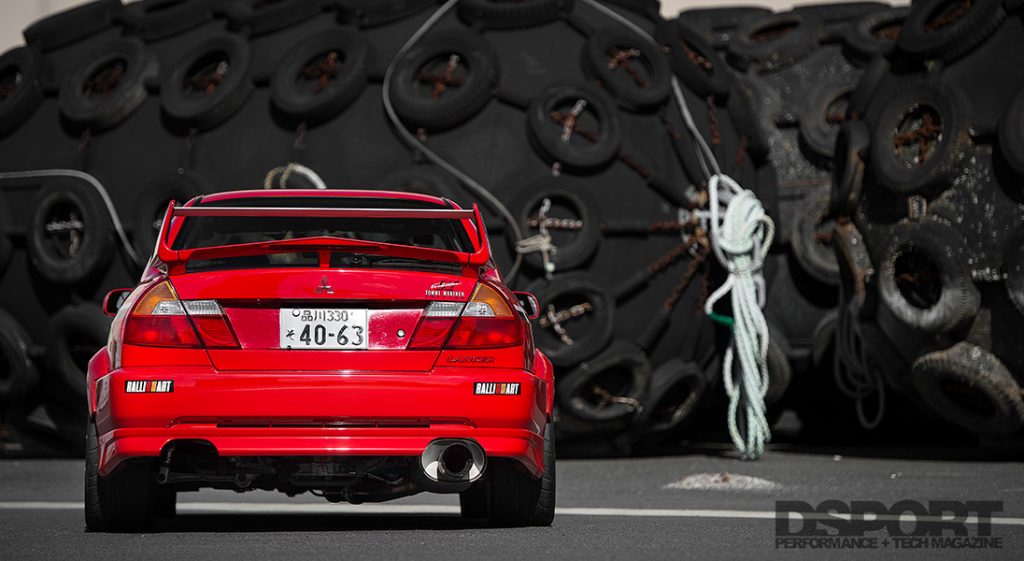 Production of the Lancer Evolution, or EVO for short, started in October of 1992. While the DSM offered a two-door coupe configuration, the EVO (CD9A) provided a four-door sedan arrangement. Despite having two additional doors, the EVO weighed in about 300 pounds lighter than its comparable DSM. The EVO II (CE9A) which saw production in the beginning of 1994 featured minor upgrades and improvements, such as wider tires, improved aero and minor suspension tweaks. By February of 1995, the EVO III (CE9A) was released. This generation featured the 7-bolt engine with increased compression ratio and upgraded turbocharger. The bodywork was also improved for a more aggressive look. The EVO III was produced through August of 1996.

The Lancer platform underwent a major revision in August of 1996 and the EVO IV (CN9A) would inherit these changes. The engine and transaxle was rotated 180 degrees to improve weight balance and reduce torque steer. Active Yaw Control became an option on GSR models. The GSR models also received the well-known two giant fog lights in the front bumper. The EVO V (CP9A) would be released in January of 1998, featuring a completely upgraded Brembo brake system and additional engine improvements. The EVO VI (CP9A) received a facelift that eliminated the EVO IVs cosmetically-challenged (a.k.a. ugly) fog lights. Moving to a smaller fog light positioned toward the outside of the vehicle allowed for increased airflow to the radiator and oil coolers. The EVO VI also featured a revised turbine wheel (titanium aluminide) on RS models for improved response.

After the impending doom of Y2K turned out to be non-existent, Hiroteru Yamaya decided it was time to purchase a vehicle that could not only rule the streets but also deliver some impressive lap times. The EVO VI TME was the perfect fit for Yamaya-san. It offered a solid foundation with plenty of upgrade potential while remaining exclusive and limited in its TME trim. With the help of Garage G-Force, this capable platform would become even better. 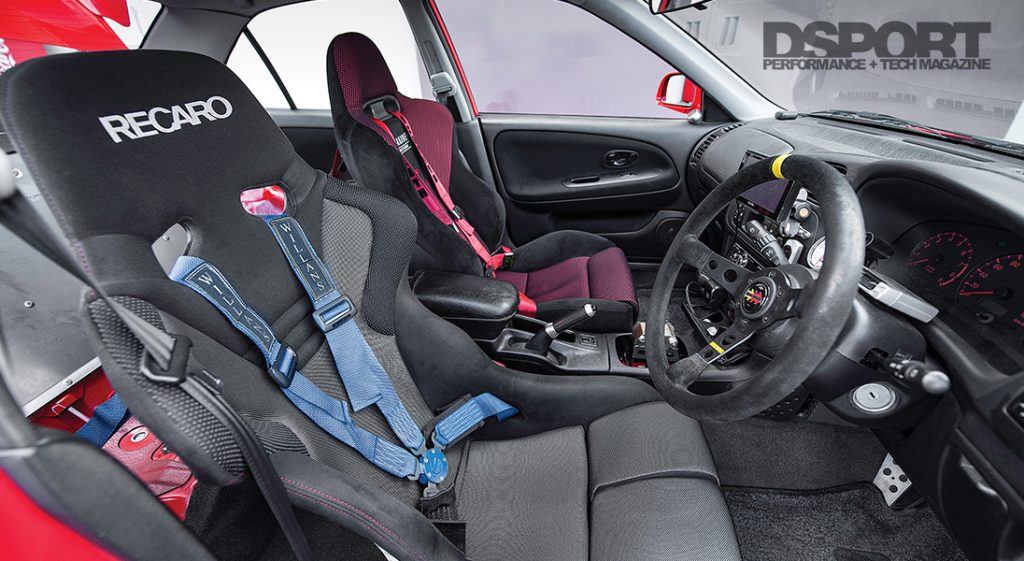 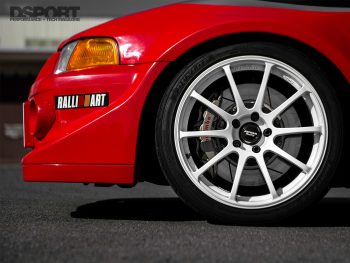 Initially, Yamaya-san and Garage G-Force focused on upgrading the EVO 6.5 for improved handling and braking. A complete Öhlins FLAG-L two-way adjustable coilover suspension was teamed with Cusco sway bars to increase grip and reduce body roll. Brembo GT 6-pot caliper and 355mm rotor upgrades were selected to replace the OEM Brembos while the matching 4-pot rear caliper and 328mm rotor setup was also installed. The additional 35mm in front brake diameter and the additional 28mm in rear brake diameter help to increase the braking torque when the pads are squeezed. The additional rotor mass also helps to keep the total system operating at a lower temperature for improved braking performance.

The brake and suspension upgrades along with basic bolt-ons (HKS exhaust, HKS V-Pro, HKS EVC 6) allowed Yamaya-san to get the most out of the EVO 6 TME without changing its personality. Optimization of all of the systems delivered a package that increased performance without sacrifice. 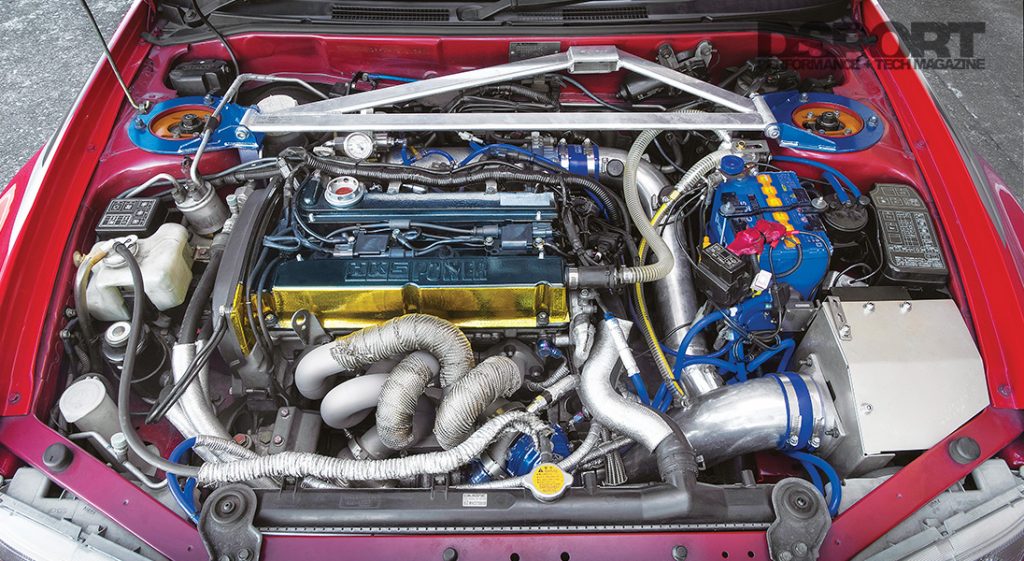 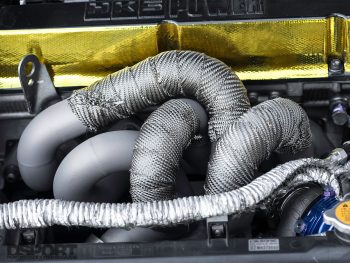 Yamaya-san loved the instant response of the OEM titanium-aluminide based turbo but he realized that he had found the flow limits of the turbocharger. Yamaya-san wanted more power, but he didn’t want to change the fun-to-drive, instant-response personality of the EVO. Garage G-Force had the answer. Full-Race offered a turbo upgrade kit featuring Borg Warner’s EFR 7670 turbocharger that could deliver 40-to-50 percent more power than the factory 16G. The EFR series uses a titanium aluminide (aka TiAL or Gamma-Ti) turbine wheel so the inertia of the rotating assembly is kept to a minimum. However, the EFR 7670 feature a compressor section that is about 40 percent larger than the 16G. Normally, 40 percent larger would mean a significant decrease in boost response. However, the dual ceramic ball bearing center section and improved compressor aerodynamics combat a good amount of the expected increase in lag. To make this 40-percent bigger turbo have a similar boost response to the OEM 16G, an increase in displacement and variable valve timing control would be needed.

A TOMEI POWERED 2.2-liter stroker kit was selected. This kit uses a 94mm stroke fully-counterweighted crankshaft (stock is 88mm stroke) along with a stock 150mm length forged H-beam connecting rod. The pistons are specific to the 94mm stroke as the pin has been moved up by 3mm to accommodate the stroke increase. While a 7-percent increase in displacement may not sound like a lot, it tends to significantly increase boost response.

The Full-Race turbo upgrade features a Borg-Warner 7670 with integrated BOV and Tial wastegate that allows for a wide usable power range and exceptional response. This combination can withstand being daily street driven as well as use on the race circuit.

To address the demand for variable valve timing control, an HKS V-CAM System STEP Pro was added. This system adds variable valve timing (like MIVEC) to EVO IV to EVO VIII engines. The system allows for up to 30 degrees of intake camshaft advance with the 272-degree HKS intake camshaft. In practice, this system allows for peak boost to be realized about 200-300 RPM sooner while the cams allow for 30-40 additional horsepower at the higher engine speeds.

With an OEM 16G turbo, full boost is usually realized at about 3,500 RPM. Since the new EFR turbo has a larger compressor wheel, one would expect full boost to not be realized until 4,100 RPM. Of course, the improved ball-bearing center section and the improved aerodynamics would allow for an improvement in the neighborhood of about 4,000 RPM. By increasing the displacement to 2.2 liters, this number is reduced to 3,750 RPM. Add in the VCAM variable valve timing and guess what? The larger engine, newer turbocharger technology and variable intake valve timing allow this 2.2-liter 4G63 to have nearly stock turbo response with the ability to deliver over 40-percent more flow and power. Optimization without concession keeps the personality of the TME EVO in order. 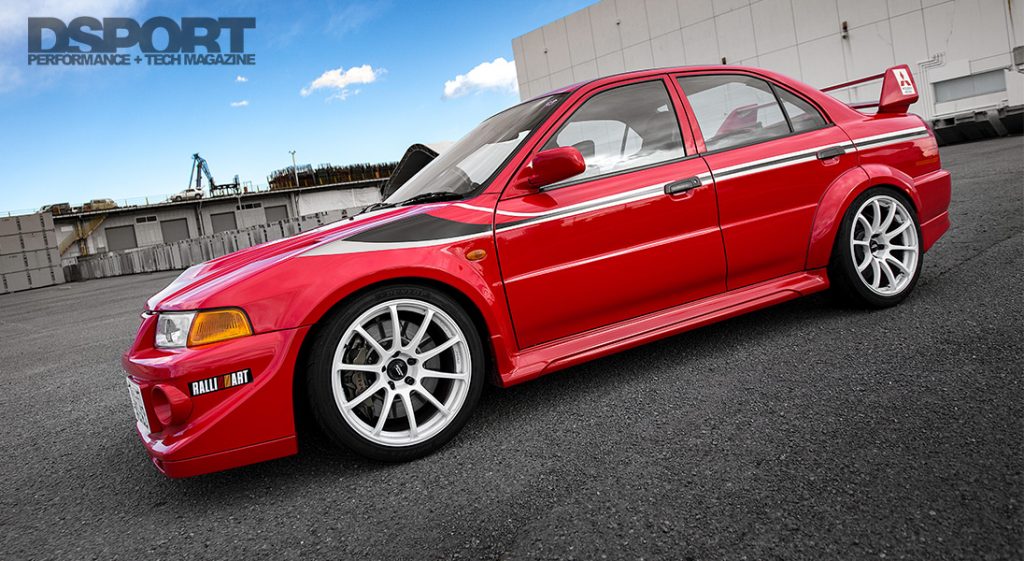 If a peak power number is your thing, it’s relatively easy to get there. With a big turbo and extra fuel, you’ll be where you need to be. However, if you are really trying to put together a combination that will deliver increased performance, unmatched reliability and peak efficiency, parts selection is key. In the case of this EVO TME, the goal was to make everything better without giving up anything. By employing the latest technologies on a nearly-20-year-old platform, Yamaya-san and Garage G-Force have managed to have it all. Considering the rarity and exclusive nature of the platform, we are pleased to see a tuning combination that does it right.