Pony cars have been the benchmark to beat since the birth of the import performance industry nearly 30 years ago, and the Mustang continues to be a solid contender for domestic-car fans and a favrotire to side with whenever the domestic-versus-import argument arises. This battle between imports and domestics still rages to this day, especially amoung many American servicemen deployed on bases all over the world. Fortunately for import fans, there are always plenty of new challengers to give the Mustang a run for its money. Text and Photos by Richard Fong 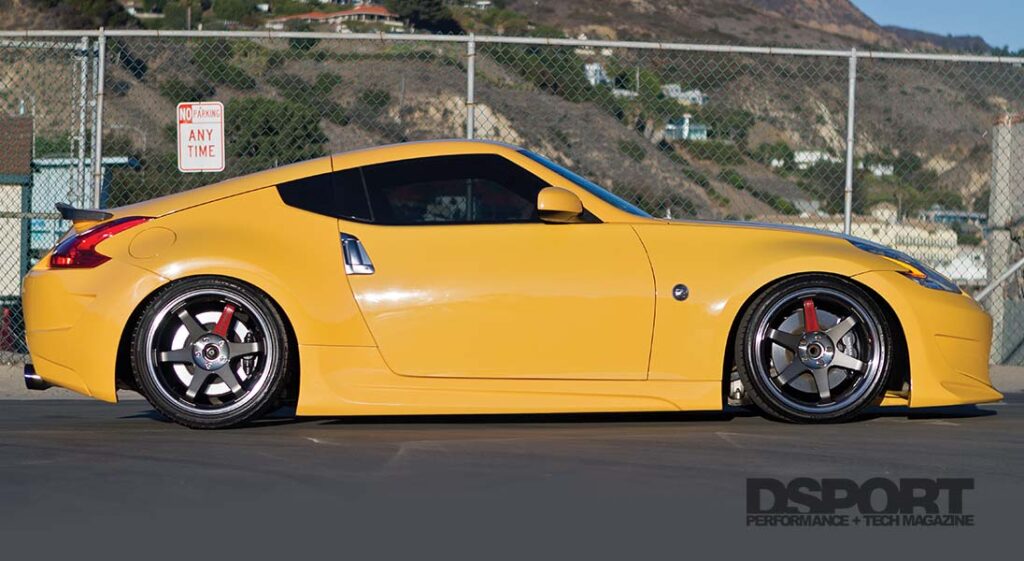 The argument for imports is compelling these days, and some pedigrees are worth pursuing. Like the die-hard Ford and Chevy crowds, the love affair with a particular bloodline is sometimes too difficult to break. For Andrew Linga, the 350Z was almost too beautiful and potent a car to let go, until the 370Z succeeded it in the Nissan lineup. Linga adds, “I chose the 370Z because I had previously owned a 350Z and loved the way that car drove. It felt and looked like a racecar. The 370Z carried on this trait, which led me to upgrade from my 2003 model to a newer 2009 platform. I found this rare Chicane Yellow (Nissan only offered this color in 2009) Z34 in Reno, Nevada. I was deployed in the Middle East at the time, so I had to fly my brothers up from Los Angeles to buy the car for me. To say the least, they had quite the adventure driving the car back to LA from Reno during the winter, through the mountains and snow. Despite the extra effort to find this vehicle while serving on the other side of the world, I am very pleased with my decision.” 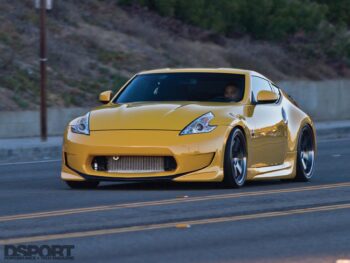 Linga started working on his Z as soon as he returned from his deployment. Beginning with a set of Stance GR+ coilovers, he dropped the Z onto Volk Racing TE37 SL wheels mounted with Falken 453 rubber. The usual intake and exhaust upgrades soon followed, as the first stages of the build reached completion. The next steps were already beginning to take shape, as Linga noted, “There is just something about the Z that makes you want to keep going further with the modifications. I did some research and became obsessed with what Sunline Racing and Powerhouse Amuse offered for the Z34.” He also faced a different challenge to overcome: the opinion of his peers. “Being in the military,” Linga continued, “I’m surrounded by Mustang owners talking down on the power output of Japanese imports. So I decided to show them up with forced induction.”

At the time, no company offered a Stage 2 supercharger package for the VQ37VHR engine, but Linga wanted the upgrade so badly that he convinced GTM to develop a Stage 2 kit for his Z. Based on the largest of the Rotrex consumer superchargers, the C38-91, this blower offered great flexibilityAccording to the manufacturer, it can support 350 to 700hp, utilizing pulleys ranging from 70 to 110mm to determine boost pressure. The GTM kit includes a billet aluminum mounting bracket and the requisite hardware for mounting the supercharger and aligning the pulleys with the crankshaft. Since the longblock remained untouched, GTM recommended a responsive and conservative 96mm pulley to keep boost pressure at 9psi. 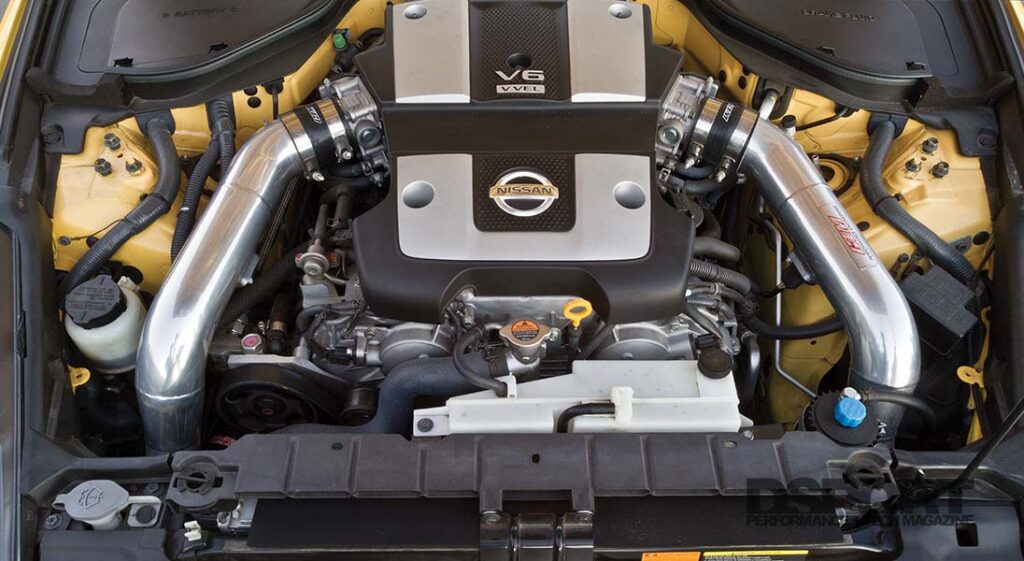 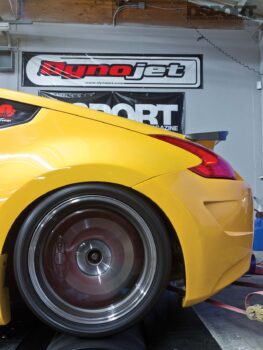 [pullquote]461.5hp and 335 lb-ft of torque… at just over 9psi boost[/pullquote]To ensure that proper air/fuel ratios accompany the newly added boost pressure, GTM included its basic fuel delivery upgrades with the kit. A Walbro 255-lph in-tank fuel pump and a six pack of 650cc/min Bosch EV14 injectors keep the 91-octane flowing, while GTM reflashed the factory engine management system with UpRev’s Osiris tuning software. With the hardware in place and the software loaded, it was time to put the Z to the test. Linga brought his Z down to DSPORT headquarters and made a few passes on the Dynojet 424xLC2 dynamometer. It posted 461.5hp and 335lb-ft of torque to the wheels at just over 9psi boost pressure.

Even with the power to mash Mustangs under his right foot, Linga had trouble deciding between various Japanese aero kits. For a short while, his Z rocked a kit from Sunline Racing, but soon others joined in on the style, and it quickly became yesterday’s news. While on another deployment overseas, the Powerhouse Amuse aero kit caught his eye. Without the patience to wait, he purchased the kit while overseas and shipped it home. Once stateside, he installed the kit, and his ride was once again unique. “The Amuse kit was and is still rare on the street, which I love. With the carbon fiber accents molded in with the fiberglass, it really sets off the bodylines of the Z34,” he explained, “especially since I wasn’t a big fan of the factory fangs in the stock front bumper.” 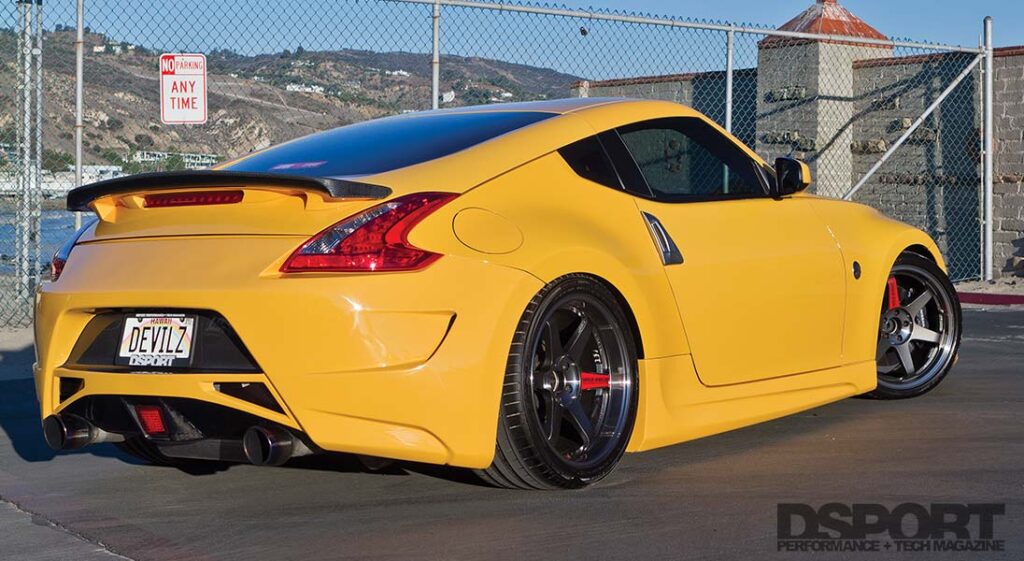 Having struck the ideal balance between form and function, Linga could not be happier driving his 370Z on the daily. With plenty of power on tap and looks that match, he’s negated the arguments of the Mustang masses at the base. But that’s not to say that this is the end of the story. Linga’s simple standout build has motivated him to seek out more parts that will further distinguish his Z from the crowd. Andrew would like to thank his build partners and sponsors, including Falken Tires, GTM Motorsports, Aiea Collision (Hawaii) and Private Collection Auto Care. He would also like to thank the active duty, reservists and veterans of the Armed Forces; his family and friends; and finally, his wife, Elaine.