Perseverance often tips the scales when faced with seemingly insurmountable odds and adversity. For those who stick with a project given all the possible challenges that come with automotive tuning, the reward of seeing a project completed can be great. While this sounds a little too melodramatic to describe a vehicle build, we can attest to this particular instance as it took over a year and a half to finally photograph this vehicle for the pages of DSPORT. Text by Richard Fong // Photos by Andrew Linga Daniel Spielman had been set on the Z33 since it first came to the US market in 2002. After a few years of saving, he finally purchased this 2006 Nissan 350Z. Spielman knew that the bone-stock Z would soon see a plethora of aftermarket parts. Long before Spielman even took ownership of the vehicle, he had compiled a comprehensive list of modifications. 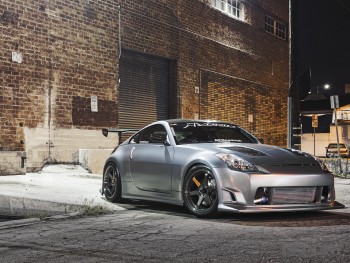 For Spielman, the 350Z online community exposed him to an overwhelming amount of information and opinion, yet it proved to be a supportive community to be a part of. Relying on the experiences of other users, he planned his build based on what others had deemed to be the best JDM or USDM parts. This was only possible after sorting past the internet tough guys and “experts” who have never gotten out from behind their keyboards to turn a wrench. 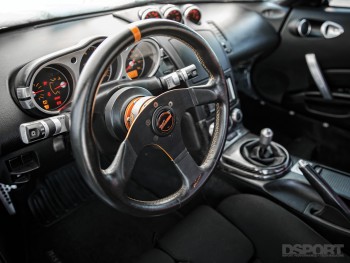 With the build underway, hardship struck and Spielman lost his position at work. As he scrambled to find a new means of income, he was forced to sell many of the aftermarket parts he had worked hard to accumulate. While he managed to secure employment before having to give up his ride, it had gone almost completely back to stock again. Fortunately, once settled into his new job, Spielman had the opportunity to build the car again. This time, he made plans to go all out with both aesthetic and performance enhancements. Little did he know that his ambitious plans would end up costing him more than he had anticipated.
Pages: 1 2 3 4
On November 2, 2014