Behind the wide fenders and glossy paint is more than your average show car. Andrew Dryden of Orange County, California, has inadvertently constructed a powerful and eye-catching 1993 Toyota MR2 Turbo and this project is proof that dreams do come true. You see, Andrew is only 19 years old, juggling school and work. However, his passion for road racing and Toyotas drove him to build an MR2 that could crush the competition not only on the racetrack but in the aesthetics department as well. Andrew is well aware of the quality products available for imports in the states and wasted no time in putting together this wide-body black beauty you see today. 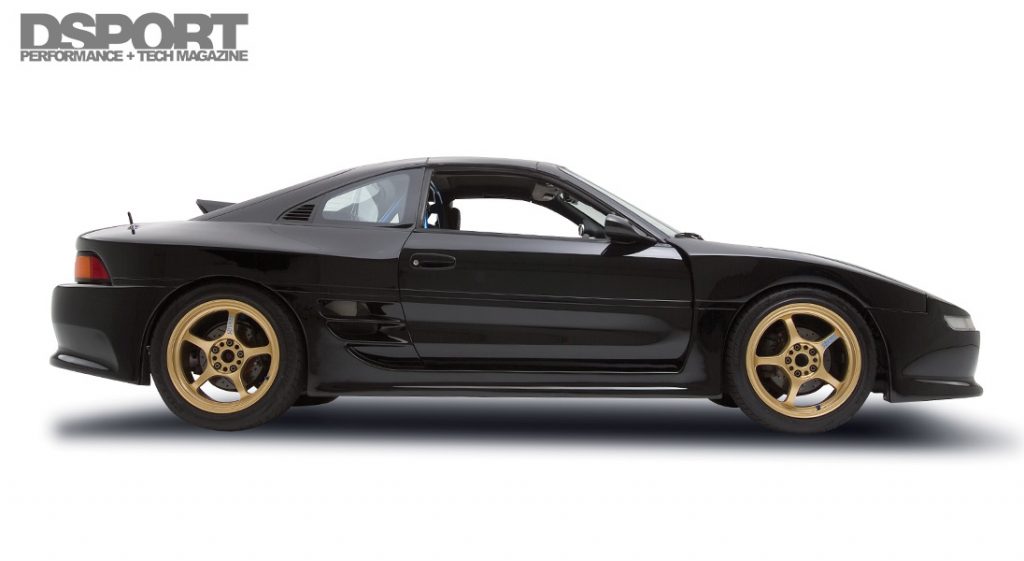 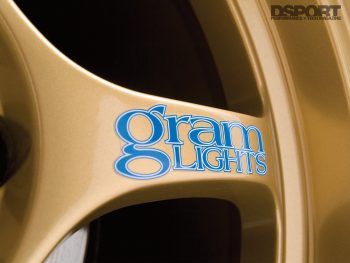 Before Andrew purchased his 1993 Toyota MR2 Turbo, he already had his mind set on what he wanted his MR2 to look like. Toyota Racing Development’s (TRD) widebody fiberglass creation was the first among his list of aftermarket products. This unique, two-seater’s visual appeal was created with TRD’s wide body kit. The kit provides enough fender flare needed to tuck gold 17 x 9.5-inch Volk Racing GramLight 57-CF wheels in the rear and 17 x 8.5-inch GramLights in the front. The 57-CF wheels are surrounded by Bridgestone RE750 tires measuring 245/40/17 in the front and 275/40/17 tires in the rear.

After Andrew fitted the car with a Phoenix Power engine lid and Ganador side mirrors, the MR2 was sent to MOBWorks Autobody for a custom color change. MOBWorks laid down several coats of the deep black hue. On the inside of the car, a Cusco four-point roll cage secures a pair of Willans Super Sport harnesses. The Willans harnesses strap the passenger to a Bride Brix II and the driver to a Bride Zeta II bucket seat. For better steering comfort and shifting control, Andrew replaced the factory units with a Momo Monte Carlo steering wheel and a TRD short shift kit. 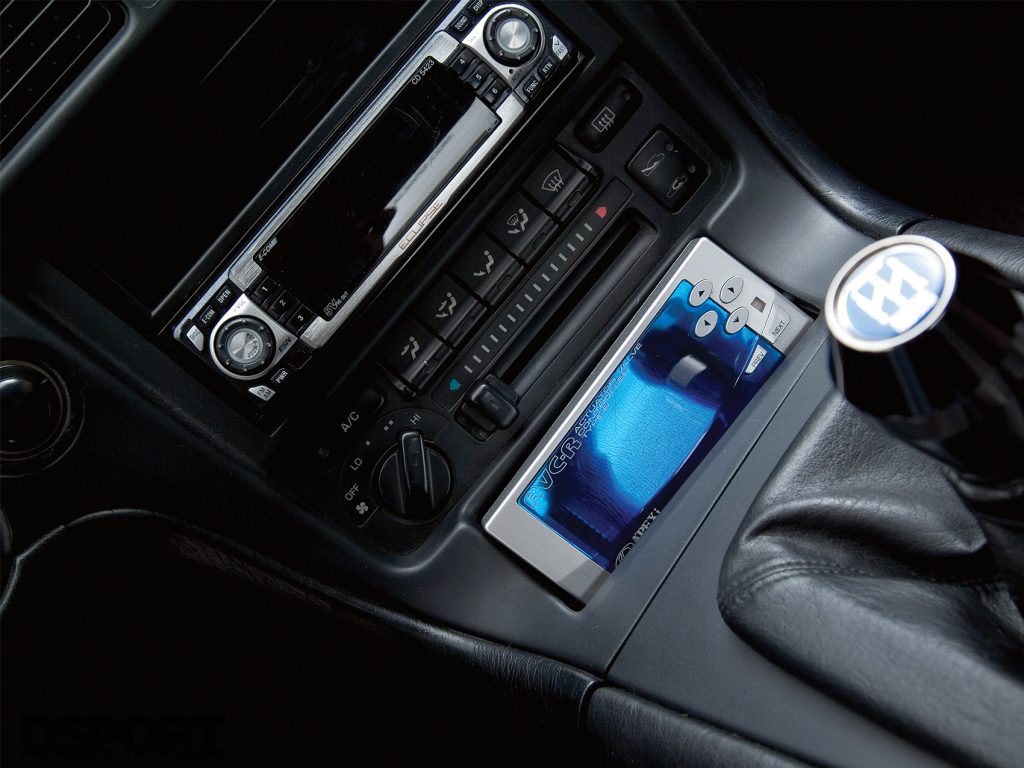 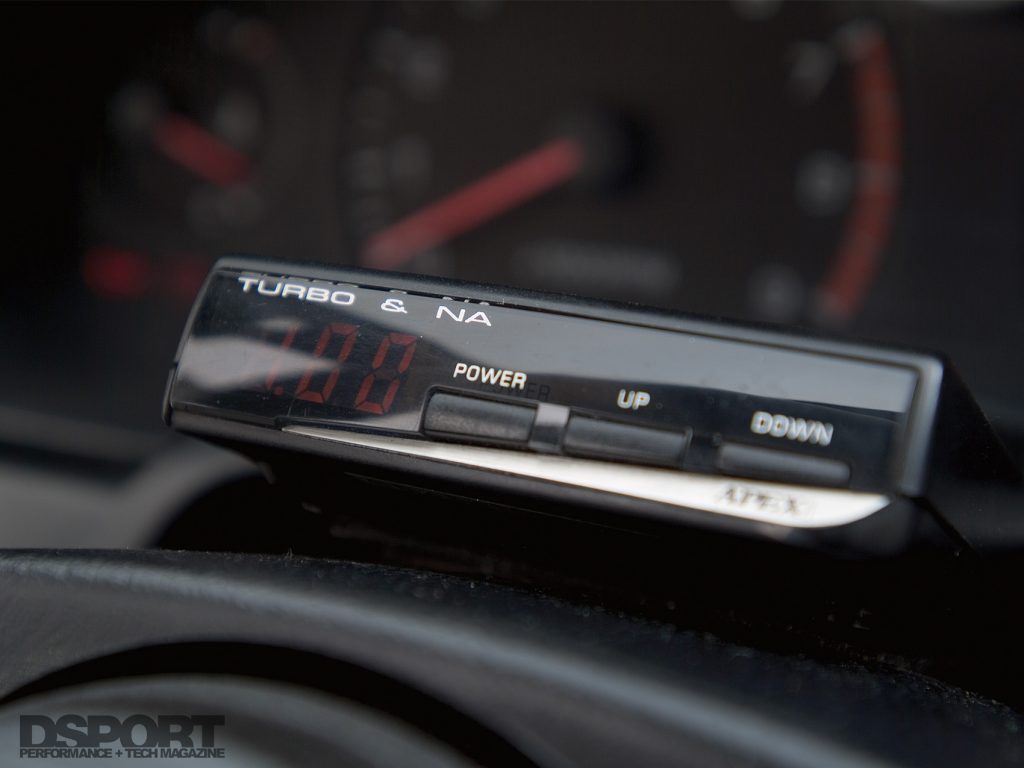 In order to live the life of a track car, the MR2 was outfitted with Cusco Zero-2R coilovers complete with pillow ball mounts. The Cusco Coilovers allow ride height and camber adjustability. Further stiffening the chassis are Cusco front and rear strut tower bars. 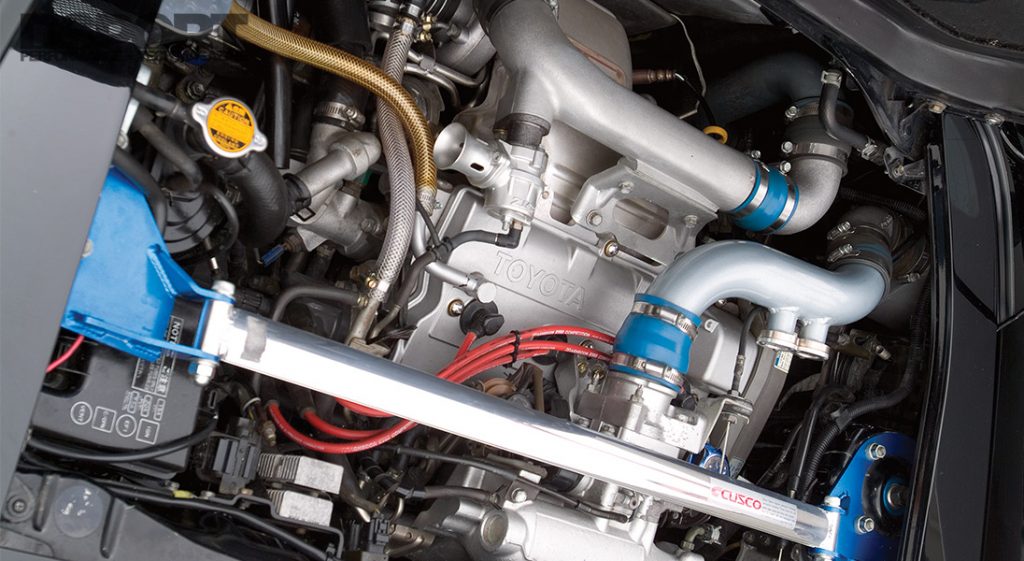 Since the MR2 seemed to be loosing power and running erratically, Andrew contacted Blast Racing in Gardena, California, to diagnose the performance problem. Blast Racing’s Mr. Wakita conducted a compression check and leak-down test and found a very tired engine. The 3SGTE was loosing compression and burning oil due to continuous redline track driving. After a careful engine diagnostic, the decision was made to rebuild the engine and upgrade the engine management system for Andrew’s high-horsepower aspirations. The 3SGTE engine was removed, disassembled and cleaned. At the machine shop, the short block was treated to a cross-hatch bore and hone, the rotating assembly balanced, and the cylinder head milled. The CP Pistons feature 9-to-1 compression and a 86.5mm bore. The factory connecting rods were shotpeened to increase durability. 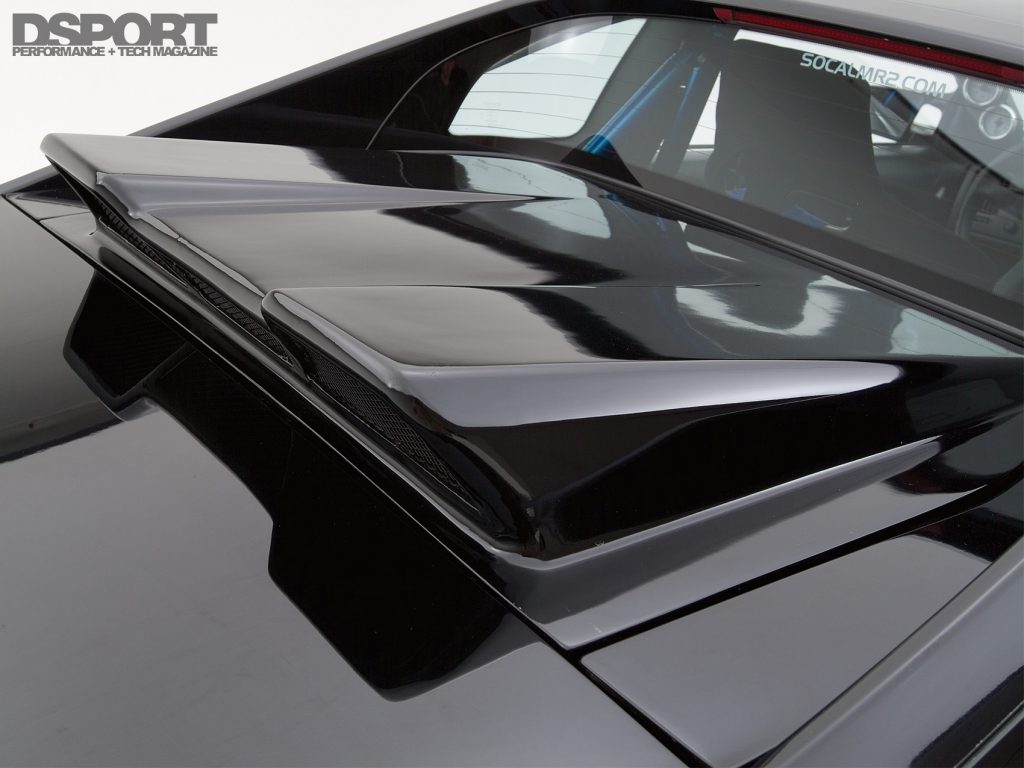 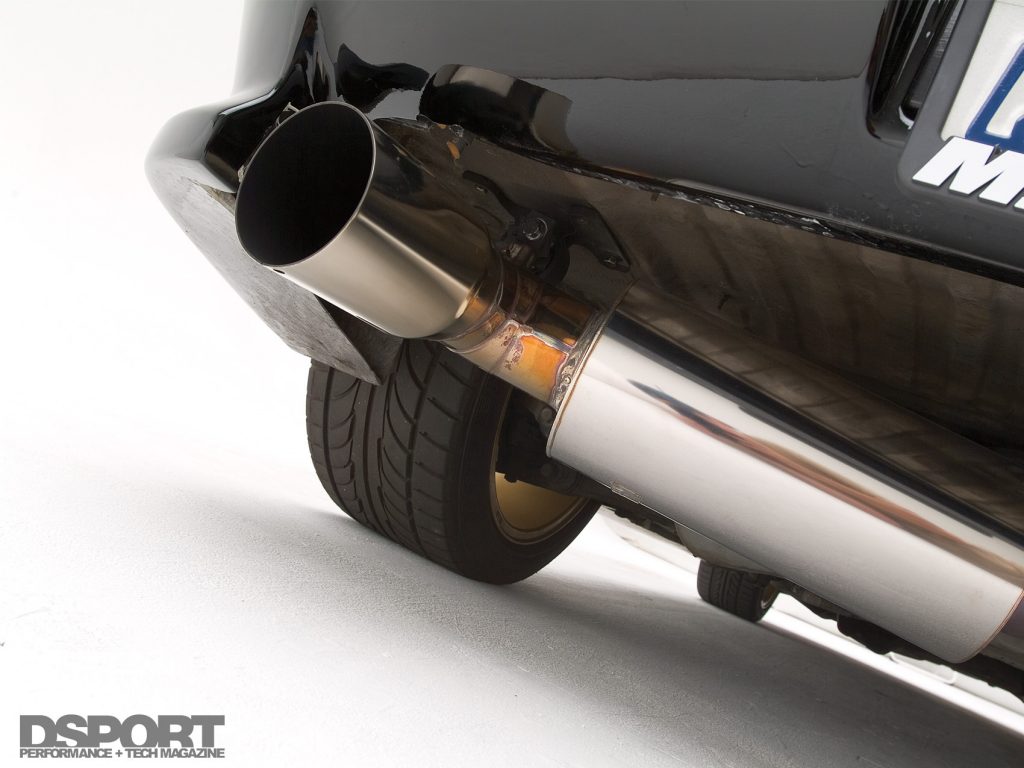 The cylinder head also received a total restoration. A set of HKS valve springs assist in the opening and closing events of the factory valvetrain. While HKS 264-degree intake and exhaust camshafts orchestrate the valve’s lifting duties. A set of ARP head studs place the clamp on an HKS 1mm metal head gasket. To stay within budget, Andrew opted to upgrade the factory turbocharger to a JDM CT20b turbo from the third generation MR2. The J-spec turbocharger inhales the cold, intake charge from an A’PEX Integration Super Induction intake. From the turbo, a Trust intercooler kit routes the charge air to an intercooler mounted in the rear side vent of the MR2. 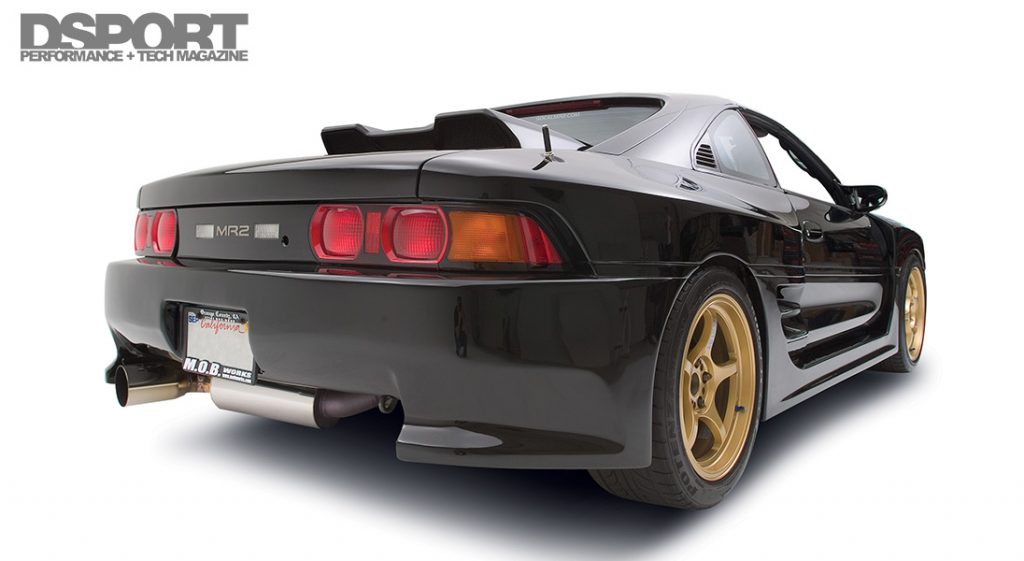 Mr. Wakita went to work on optimizing the air-fuel mixture of the factory turbocharged engine. Their tuning tool of choice is an HKS F-Con Vpro ECU. The HKS F-Con converted the MR2 to a D-Jetro system by eliminating the factory Mass Air Flow sensor and replacing it with a MAP sensor. The Toyota’s power is transmitted to the wheels through an ACT Xtreme clutch kit and Fidanza lightweight flywheel. Both drive wheels turn simultaneously thanks to a TRD limited-slip differential. At just 15 psi of boost pressure, the 3SGTE currently cranks out 335 horsepower and 240 lbs/ft of torque to the wheels. With a quartet of RC Engineering 550 cc/min fuel injectors and a Wolf Katz Engineering fuel rail on order, high horsepower numbers are soon to come. Seeing that Andrew has already ran an all-time best of 1:32.756-seconds at the Streets of Willow Raceway on his previous setup, we’re anxious to see what he can do with his new-found power.