To Street or not to Street, that is the question. Do we allow our Project EK Civic to roam the streets or do we dedicate it to a life spent in garages, trailers, dynos and drag strips. With this project, we have reached a crossroad that many of our readers will encounter and now a decision will ultimately need to be made. Before you cast your vote, it’s only fair that you know the whole story behind the owner and the car. 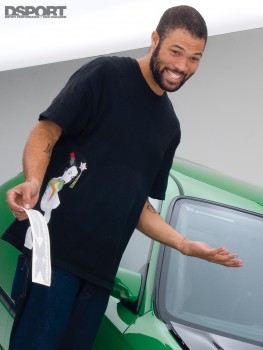 Meet Jeren Walker. Jeren is DSport’s Project Coordinator and also a die-hard Honda enthusiast. While his enthusiasm for Honda performance is second to none, his experience level with building project vehicles is still limited. For his own good, we stressed that Jeren complete as much of the work himself as possible. This included assembling one of the engines.

With the intent of doing things right, Jeren tried to get as much information as possible. This led to taking up several hours each week to get answers from other employees plus a number of hours at home finding out what the hot setup was on Honda- Tech. Listening to too many people (many times the wrong people) resulted in a number of situations where the parts selected were either “overkill” or not up to the task of getting the job done. 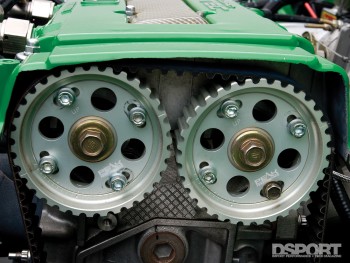 Some project cars go together easily, others travel a long and hard road to completion. This Civic, in particular, seems to often be the victim of bad luck. Only a couple weeks after the Civic was painted in December of 2006, a tipsy Christmas caroler decided to back into the rear quarter panel. However the problems with singing drunks would pale in comparison to the problems encountered with the engine. The first engine had an issue with sinking cylinder sleeves. The second engine developed cracks in valve relief areas of the pistons. For the third engine, we pushed Jeren to learn how to build an engine himself. The assembly went off without a hitch except for one thing: an improperly tensioned timing belt. With just a hair over 100 miles of light break- in miles, the loose belt allowed the cam to skip a few teeth. The result was piston to valve interference that destroyed all four pistons and the cylinder head. For the fourth engine, Dan Benson of Benson’s Automotive Machine did all the machine work and assembly on the short block while Editor-in-Chief Rob Choo helped with the timing-belt tensioning. 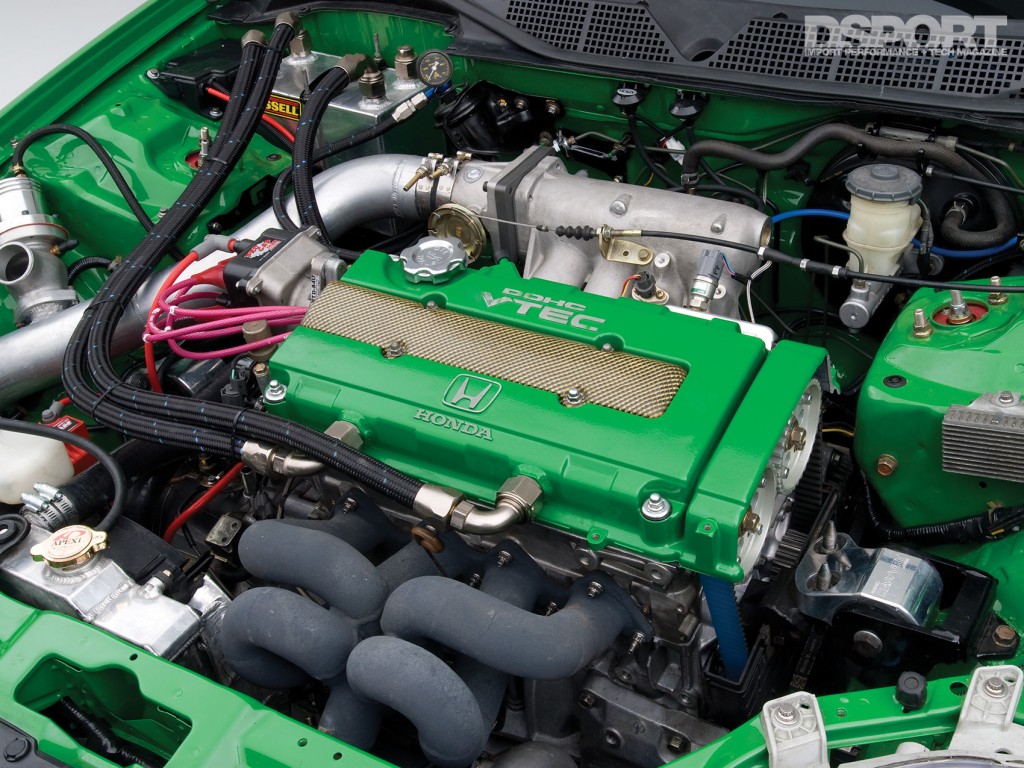 The fourth engine seems to be the charm as its already survived 1000-mile break-in period and its first session on the dyno. This Type-R B18C5 shortblock was machined and assembled by Dan Benson, as previously mentioned. The rotating assembly uses the factory crankshaft while stronger 4340 forged- steel Manley Turbo Tuff connecting rods were chosen to make the link to the Wiseco 82mm slugs. The Wiseco pistons feature ultra-high-strength 2618- alloy construction while sporting a 9.1-to- 1 compression ratio. The Wiseco pistons also incorporate a dry-film lubricant coating on the piston skirts to reduce piston scuffing in the cylinder bore. A Fluidampr harmonic balancer ensures that engine harmonics are minimized to ensure a long life for the Clevite main and rod bearings. With the Evolution Industries high-flow oil pump assembly in place; this shortblock is ready for high- rpm action.

The top end of the engine consists of a CNC-machined DART cylinder head fitted with a complement of SI stainless- steel valves, SI dual springs and SI retainers. This valvetrain is set in motion by a pair of BLOX Type-A camshafts. The Type-A grind is BLOX’s answer to Honda’s Type-R profile and it’s a great choice for daily-driven all-motor and turbo B-series engines. A set of ARP head studs and a Cometic head gasket cinch and seal the cylinder head to the block.

With a target of 550-plus horsepower to the wheels on race gas, a capable turbo and fuel system was in order. To meet these demands, a Peak Boost first- generation turbo manifold was selected. While improvements in fitment are realized with the latest- generation top-mount manifold from Peak Boost, we decided to first try out the bottom-mount manifold that we had on hand. This tubular manifold was coated by Jet-Hot to provide proper heat management. The manifold is home to a Blowzilla T3/GT40 Garrett turbocharger. This hybrid features a conventional journal bearing assembly, T3-based turbine inlet and a GT35-family compressor wheel and compressor section. The end result is a value-oriented, high- horsepower solution for T3-turbine- inlet applications. The capacity of this turbocharger is rated at 65 lb/min or roughly 650 flywheel horsepower. Once this compressor elevates the pressure of the intake air, the charge air is then directed through the custom XS Engineering front-mount intercooler. This tube-and-fin heat exchanger effectively rejects the heat from the pressurized charge air without adding the excessive weight found in some other intercooler designs. Once the charge air traverses the core, custom aluminum I/C piping (fabricated by Evolution Racewerks of Baldwin Park, California) directs the flow to the 75mm Edelbrock throttle body.

The single-lane highway turns into a four- lane transition as the BLOX intake manifold directs the flow to each cylinder. To supply the fuel for the fire, a set of four 1,000cc/min RC Engineering injectors take cues from the A’PEX Integration Power FC stand-alone, plug-and-play engine management system or “Full Computer” as it’s known in Japan. The Power FC also sends the trigger signal to the MSD Programmable Digital-7 Plus ignition system. The Digital-7 energizes an MSD HVC-II ignition coil. Once the voltage is stepped up, a set of A’PEXi ignition cables carry the current to the NGK Iridium BKR8EIX spark plugs. This combination has provided misfire- free performance while also allowing for a number of additional features through the programmable interface. The MSD Digital-7 Plus allows multiple ignition rev-limiters, multiple ignition retards, RPM/time/boost activated triggers and more. The end result is an ignition system that will allow maximum performance on the launch from a turbo vehicle, as well as maximum power in each and every gear through optimized ignition timing. A full-complement of Russell Performance ProClassic –AN fittings and hoses ensure leak-free fluid delivery while giving the engine compartment a super-sano look.

Article Continued on Next Page >>