You are at:Home»The Cars»Projects»Part 8: Project RH9 GT-R | GT-R Back in Black, Getting Ready to Attack

Part 8: Project RH9 GT-R | GT-R Back in Black, Getting Ready to Attack

We almost forgot why our Project RH9 Skyline GT-R was our dream car. With a broken factory transmission, our Project RH9 GT-R went from its daily- driven, head-turning glory to a very-large obstacle in our garage. While obtaining another factory transmission would have had us back on the road in the least amount of time, it would have only been a band-aid and not a fix. Our fix would be to upgrade the factory transmission to a Holinger 6-speed sequential gearbox. Thanks to the cooperative efforts of Holinger, Exedy, AEBS (TOMEI ), Blast Racing, Motorex and XS Engineering, Project RH9 GT-R is on the road again and back on pace to become one of the baddest daily-driven cars in the world. 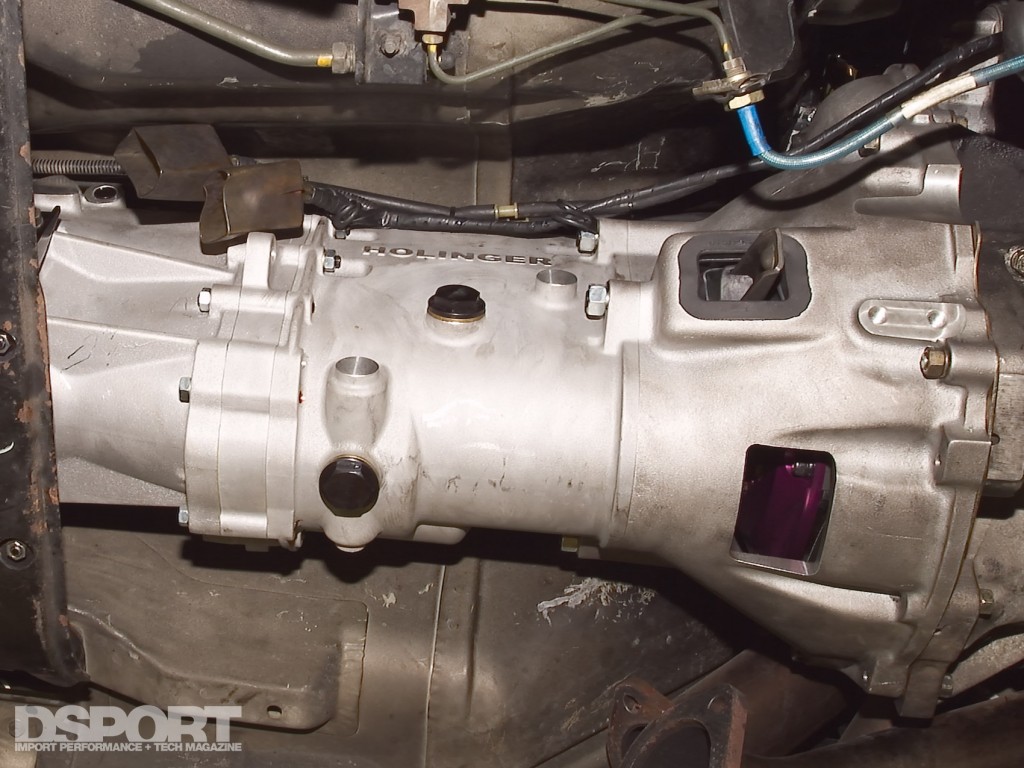 The Holinger 6-speed sequential gearbox represented the biggest out of pocket investment that we’ve made with this project to date. However, Holinger’s reputation for durability and performance made it our only choice considering our future plans. With plans for over 1000 horsepower at the flywheel, we were told from our contacts in Japan that the upgraded gear sets that fit into the stock transmission case wouldn’t be able to take the power. At the time of our decision, Holinger represented the only choice that made sense. 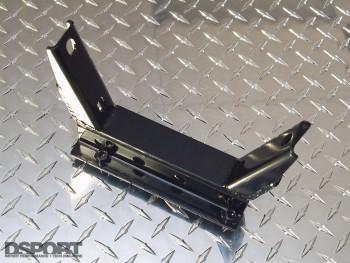 We placed an order for our gearbox and waited about eight weeks. Each Holinger is custom built for each application and that means there is generally a four to eight week production time needed. Upon receiving our transmission from Australia, we immediately began the search for all of the parts that we should have ordered at the same time as the gearbox. Namely, we needed a clutch fork, pivot ball, dust boot, transmission mount, slave cylinder and clutch for the Holinger that would find a home in our R33 GT-R. Unfortunately, Holinger didn’t even have the part numbers of all these incidental parts that were needed. Traversing across language barriers through the internet, our friends at VeilSide and Tomei provided us with some direction as to which parts were needed. The Holinger transmission was originally built for the R32 GT-R and that meant the clutch fork, pivot ball, dust boot , retainer clips and slave cylinder would need to be from that vehicle. Rather that place an order for the parts in Japan, we took the gamble that the clutch fork, pivot ball, dust boot, and retainer clips would be identical to the Nissan 300ZX twin-turbo (Z32). In fact, our gamble paid off. Now, we only needed to source the slave cylinder, transmission crossmember and clutch to have all the parts that we needed. 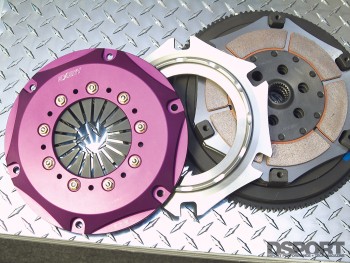 The slave cylinder would be sourced from the shelves of Motorex, the authorized importer of Nissan Skylines. Besides importing the GT-R and GT-S Skyline, Motorex also carries a few of the more popular Nissan and Nismo parts for these vehicles. We selected the Nismo slave cylinder as it’s larger diameter cylinder reduces pedal pressure and increases sensitivity on short throw release clutches (most multi-plates). The transmission crossmember was ordered from TOMEI. Because our timing was off, we missed the regular shipment and ended up waiting a good amount of time for the crossmember. While we were tempted to fabricate our own crossmember, we decided to not take any chances in misaligning the transmission. As for the clutch, Exedy came to the rescue with a part number in their catalog specifically for our Holinger (NM033HRWH). This Exedy clutch is designed specifically for drag racing. The clutch features a lightweight chrome- moly steel flywheel; three T5001 cerametallic, lightweight, solid-hub clutch discs; and a high-clamp-load billet aluminum cover pressure plate. The clutch is designed for RB26DETT applications exceeding 1200 flywheel horsepower. For this application, Exedy suggests a Nissan release bearing (30502-14601) combined with either the 14mm (30501-N1601) or 16mm (30501-U0200) carrier. While the clutch was never designed for daily-driving, that’s exactly what we’ve put it through for the past three weeks. It’s performed extremely well on the streets, despite never being designed for such use. As with nearly all metallic-based, multi-disc clutch systems, driver skill becomes a necessary component for smooth engagement. Unlike a single-disc, the window is small between the clutch being completed engaged and completely disengaged. It takes a little time to become familiar, but it shouldn’t be too hard for anyone to master it a few days.

Blast Racing of Gardena, California was sourced to install the Holinger transmission and Exedy racing clutch. Owner Tadatoshi Wakita is no stranger to Japanese performance vehicles as he built and piloted the company’s SC400 into the low 7s at an IDRC event held at LACR (Palmdale). 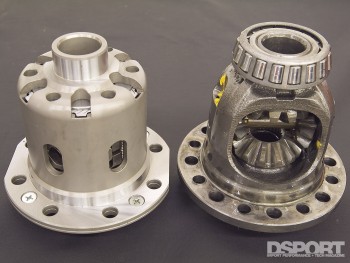 As it turned out, the installation went fairly straightforward with few hiccups. However, we were very happy that we sourced Blast Racing to work on our GT-R as the front Cusco LSD installation was done in record time. Normally, the entire oil-pan needs to be removed to service the front differential, but Wakita-San’s experience with the GT-R knew a much quicker route that kept our factory oil- pan seal in tact. The benefit to this was that the clutch, transmission and front differential were done in a single day. While there are a growing number of great mechanics surfacing in Southern California, we felt that we made the right choice for an experienced eye on our GT-R. 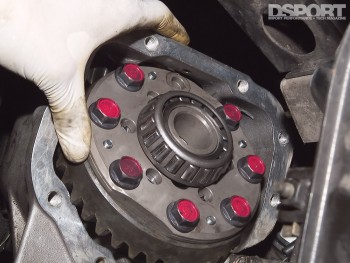 After topping off the gearbox with Royal Purple 75W-140 Synthetic and the transfer case with B&M Synthetic Trick Shift Automatic Transmission Fluid, the GT-R was fired back up to life on the lift. With the wheels in the air, a deep clunk was emitted from the gearbox as the shifter was pulled back to put the transmission in first. The car idled for a few minutes in gear and was slowly brought up to speed, before the selector was pulled back again for Second. “Clunk.” Now in second gear, we once again increased the rpm and speed before pulling back for Third. The same routine followed by the half- thud/half-clunk of the gear change eventually took us to sixth gear. From sixth gear, we brought down the engine speed and rpms and began to shift down a gear at a time (by pushing the shifter forward) until we were back in First. During this entire process, the clutch was used to soften the shock to the gearbox during this initial break-in period. 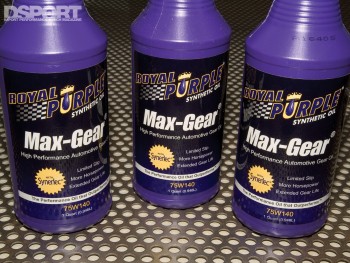 While going through the gears proved easy, finding Neutral and Reverse would prove to require some experience and training. Once in First, Neutral can be accessed by holding the shifter to the left and pushing up. While it sounds easy, too fast or too slow of an approach speed on the shifter won’t allow it to go to Neutral. Reverse is found in an identical pattern from Neutral, holding the shifter to the left and pushing up. Reverse proved to be even harder to locate on our first day of use. After driving the Holinger everyday for the past three weeks, finding Neutral is no longer a problem. As for Reverse, we can hit it the first time at about an 80-percent rate. If we have problems, we either select reverse from Neutral with the engine off or try to put the car in First and then Neutral and Reverse.

On the road the transmission has only a slightly higher gear noise than the factory gearbox when under load. Off load, in every gear except 5th, the transmission howl is noticeably more than stock. However, this additional noise is still quite bearable. Much of this is due to the fact that the Holinger uses high- performance helical cut gears rather than straight cut gears. The noise that takes some “getting used to” is the gear change clunk. Whether the clutch is used or not, the non-synchro, dog-face engagement design of the Holinger results in a sound that’s pretty scary upon shifts. It’s the kind of sound that will have your girlfriend asking if there’s something wrong with the car.

As for the Exedy triple-plate clutch, we are so far pleased with its performance. The engagement is very good considering its triple-plate design and now our only concern is how long it will last in day-to-day driving.