You are at:Home»The Cars»Features»Paul Newman’s Datsun 200SX Racecar Returns to the Tarmac

Not everyone with a healthy income and a car collection can claim to be a true enthusiast. A respectable few, including Jay Leno, David Letterman, CJ Wilson, and the late Paul Walker have significant car collections that are not simply museum pieces; they see use and abuse, just as they were originally intended. One of the latest to join this fraternity of legitimate car guys is Adam Carolla. 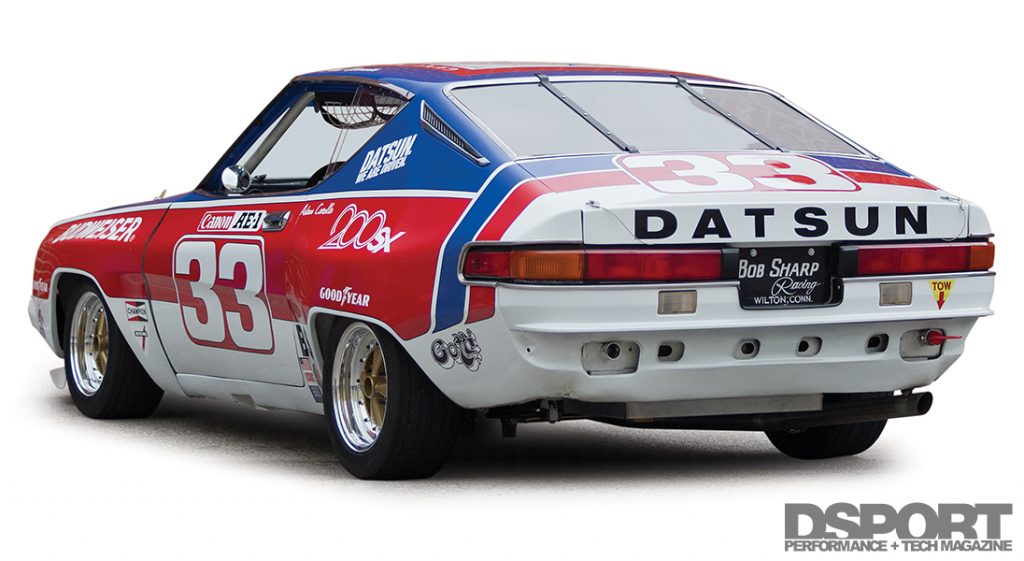 In 1975, the Datsun 200SX was released in the USA. Designed to compete with the Toyota Celica, the 200SX left much to be desired in the excitement department. Based on the JDM Datsun Sunny Coupe (Nissan S10 Silvia), the 200SX featured an L20B engine making just under 100hp and had the less than desirable leaf-spring suspension (compared to the revered Datsun 510’s independent suspension.) Despite its shortcomings, some managed to find the competitive edge behind the wheel of the 200SX. Bob Sharp Racing and big screen actor Paul Newman worked together to campaign this 1977 200SX during the 1978 IMSA season in the C Production class. The team worked hard, steadily improving throughout the season. With this platform, they earned a number of victories that year. 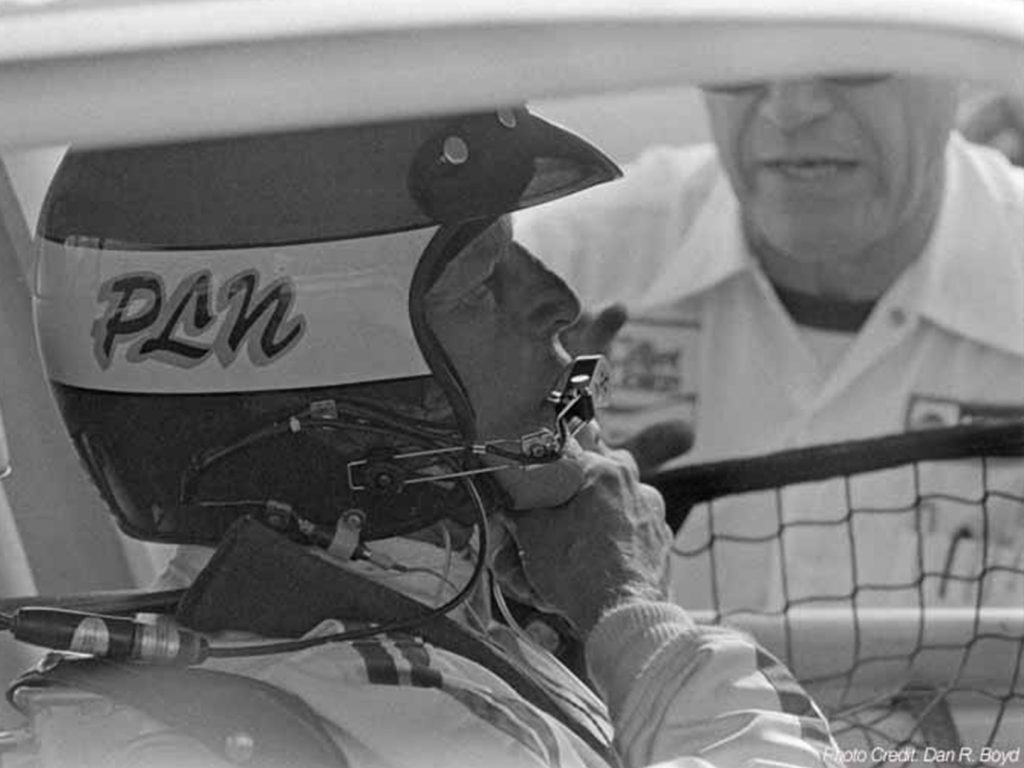 Since its professional retirement, this Bob Sharp/Paul Newman 200SX has traded hands, the most recent transaction occurring in early 2014. Vincent Bedini of Bedini Motorsports in Connecticut sold the 200SX to celebrity, Adam Carolla, a classic car enthusiast, Paul Newman fan and enthusiast racer. Bedini owned the 200SX for a number of years, so before the sale was completed, he refreshed the engine, suspension and brakes before rolling the S10 onto a transport bound for Southern California.

So what is this racecar made of? Outwardly, the S10 chassis features a host of Bob Sharp Racing custom fiberglass pieces for weight reduction and enhanced aerodynamics. Inside the cabin, a custom roll cage provides a protective endoskeleton for the driver. A bucket seat and harnesses by Sparco secure the driver in place, while a Sparco steering wheel transfers steering commands to the front wheels. The custom dash panel houses a host of gauges by SW and Jones Motorola. 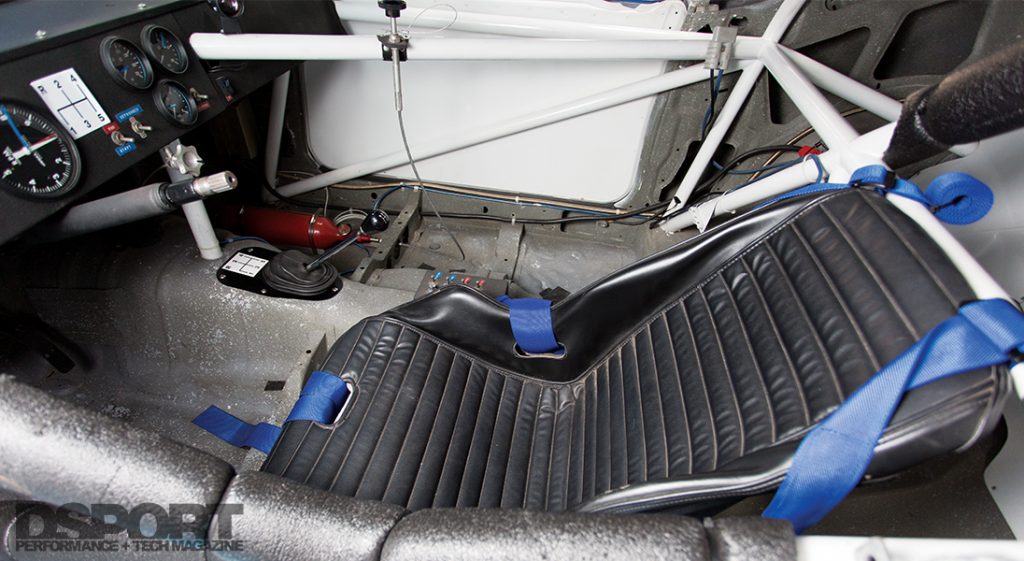 The Power to Pull

Moving on to the engine bay, a look under the fiberglass hood reveals the 2.0-liter L20B engine. The nearly square (85mm x 86mm) bore and stroke dimensions remain unchanged. However, a new set of pistons raised the compression from 8.5-to-1 up to 10.0-to-1. For improved fuel delivery and aspiration, Solex 50mm twin-choke carburetors sourced from the Datsun competition catalog replaced the factory units on the cylinder head. To ignite the higher compression air/fuel mixture, a Mallory ignition coil sends spark energy through a set of MSD spark plug wires to a quartet of Champion spark plugs. The improved ignition components work with the higher-compression pistons to raise the horsepower output to an estimated 200hp. 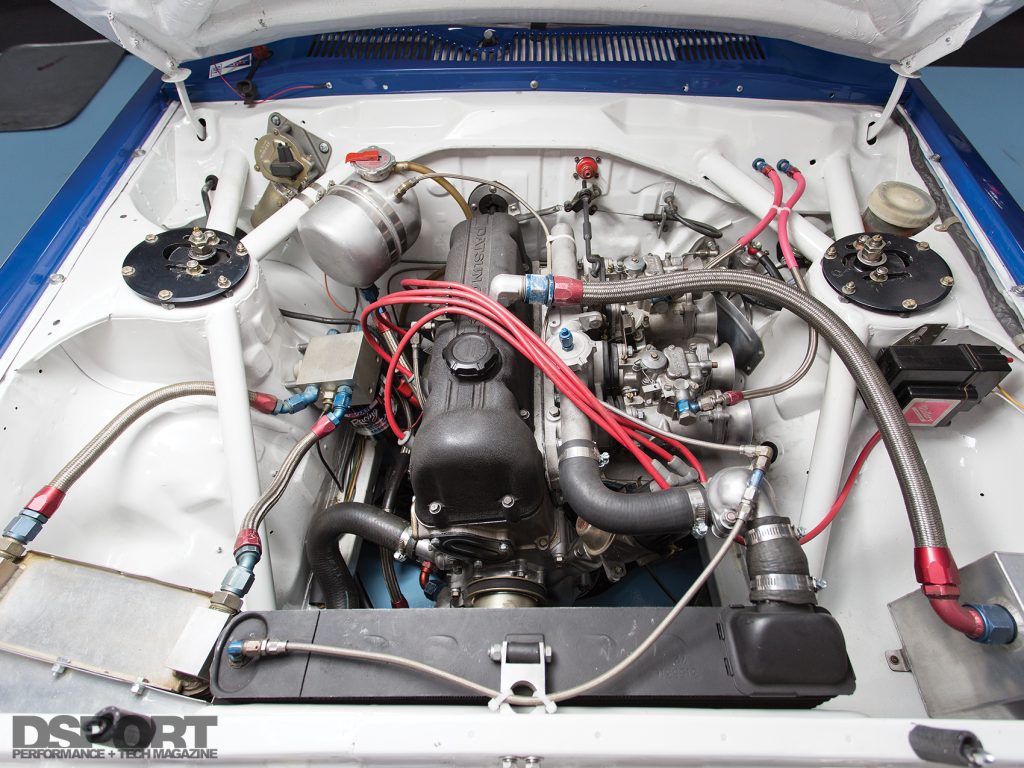 The four-cylinder Datsun L20B engine (not to be confused with Datsun’s L20 inline 6-cylinder engine) debuted in the 1974 Datsun 610 and made its final appearance in 1985. Early versions of the engine produced 97hp and 102 lb-ft torque in the 200SX and 110hp and 112 lb-ft torque in the 610. Race configured L20B engines (like the one powering the Bob Sharp Racing 200SX) benefitted from Solex 50mm twin-choke carburetors that helped to nearly double the output of the 2.0-liter engine. Some non- USA versions of the L20B engine featured fuel injection and a switch to round exhaust ports. Numerous other variants of the L20B appeared in Datsun’s US cars and trucks, making it the most versatile engine thus far in the company’s US history. 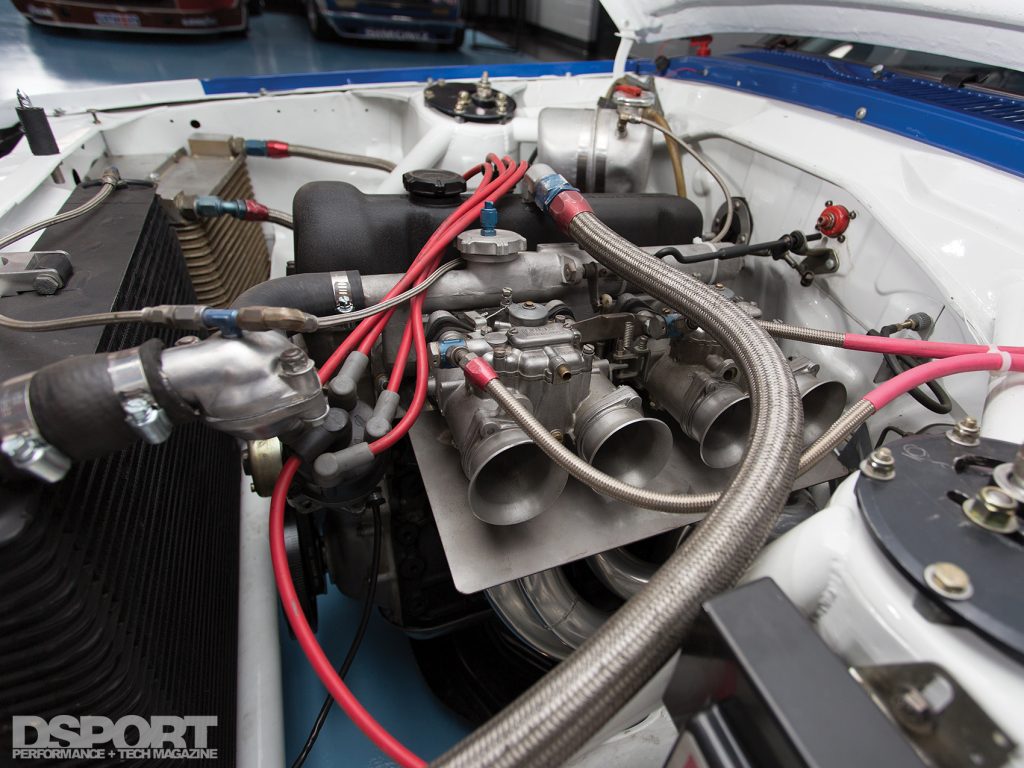 Five on the Floor

Now producing double the factory output, efficiently transferring torque from the crank to the transmission required a better clutch than what was available in the 1970s. Therefore, a custom flywheel and Quarter Master clutch were bolted to the crankshaft to increase the torque capacity being applied to the input shaft of the factory five-speed manual transmission. The transmission sends torque to the rear end where it is split between the 13-inch Gotti 073S wheels mounted with Hoosier Street T.D. tires. Koni shocks absorb the bumps and help keep the Hoosiers pressed firmly to the pavement. 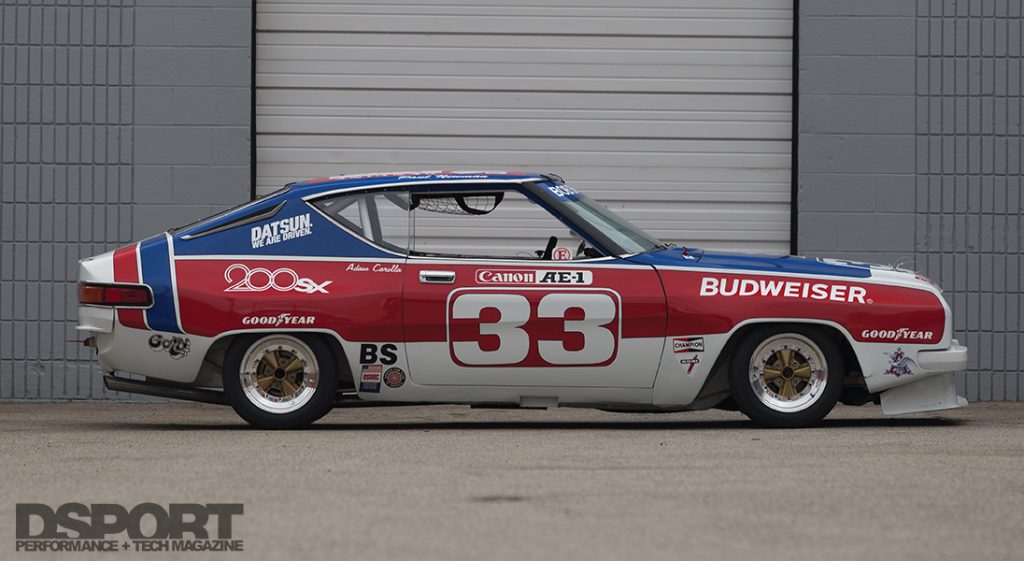 Back on the Track

Although his schedule has allowed him only a few opportunities to race the car, Carolla admits that this has become one of his favorite cars to race. The 200SX takes him back to the late 1970s and gives him an idea of what Paul Newman experienced when the car was newly built. He explained, “The 200SX is a momentum car, you have to drive consistently and precisely because the car doesn’t have a lot of horsepower to help make up for inconsistencies or errors. Making only 200-220hp with no turbocharger leaves you stranded if you blow a shift. You’d already be out of the running if that happens in a race. To me, this is a purer form of driving. To be competitive, you have to drive mistake-free. It didn’t take long for me to get used to this car, as it feels similar to the 610 and the 510 on the track. It also provides good visibility and is easy to transport. This was Paul Newman’s winningest car. Unfortunately, although he won the most races with this car, he didn’t win a championship with it.” After a brief racing career in the hands of American racing legends, this 200SX gets a second chance to hit the track while holding a treasured spot in Carolla’s garage. 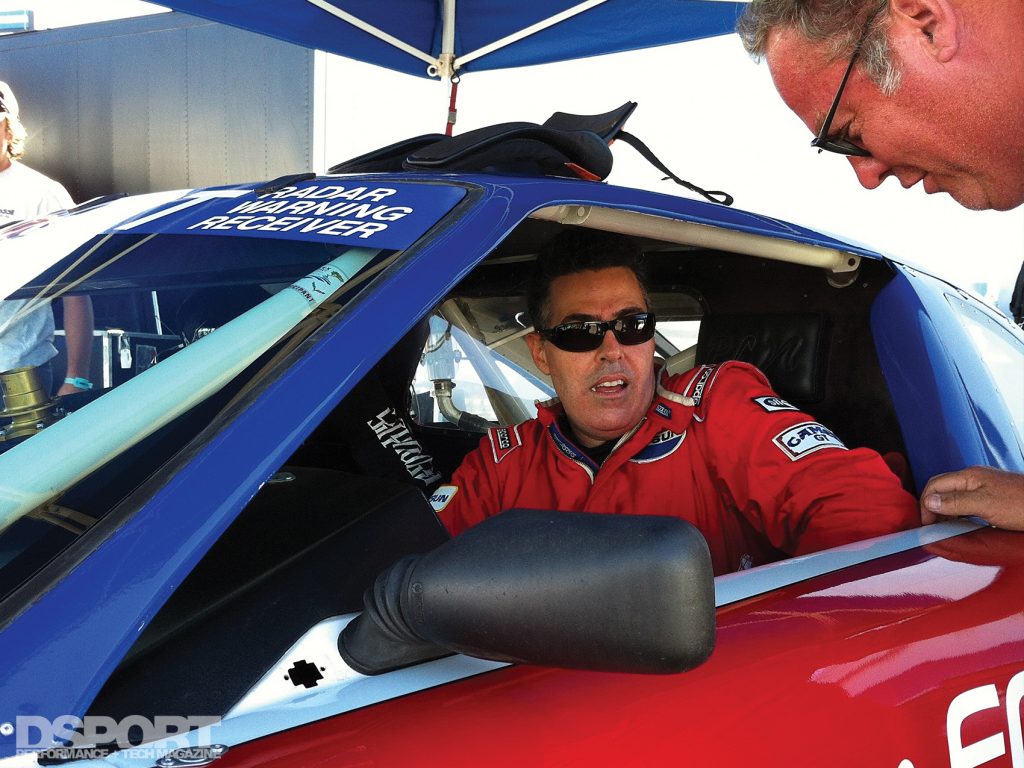 Adam Carolla has raced at several venues geared toward the classics, including the Coronado Speed Festival and the Rolex Monterey Motorsports Reunion. Carolla goes on to describe his racing experiences, stating “I got bitten by the racing bug at the Toyota Pro/Celebrity Race held during the Long Beach Grand Prix week. The HPDE training I received at Willow Springs gave me a foundation to race on. I was the celebrity winner in 2012 and the pro winner in 2013. Once I started buying the vintage racecars that I admired in my youth, I began seeking racing venues where they’d fit in well. Coronado and Monterey offered vintage and classic car races that were a proper fit. The Coronado Speed Festival is a rough track. I only got to run in two heats at Coronado, so I didn’t get much seat time before competing. At the Rolex Monterey Motorsports Reunion (held at Mazda Raceway Laguna Seca) it was a similar situation. I’d get in a practice session, run in qualifying, then race. I don’t even have the free time to go to open track days, which pretty much leaves me with little opportunity for seat time other than the heat of competition. But I savor whatever chances I can get behind the wheel.” 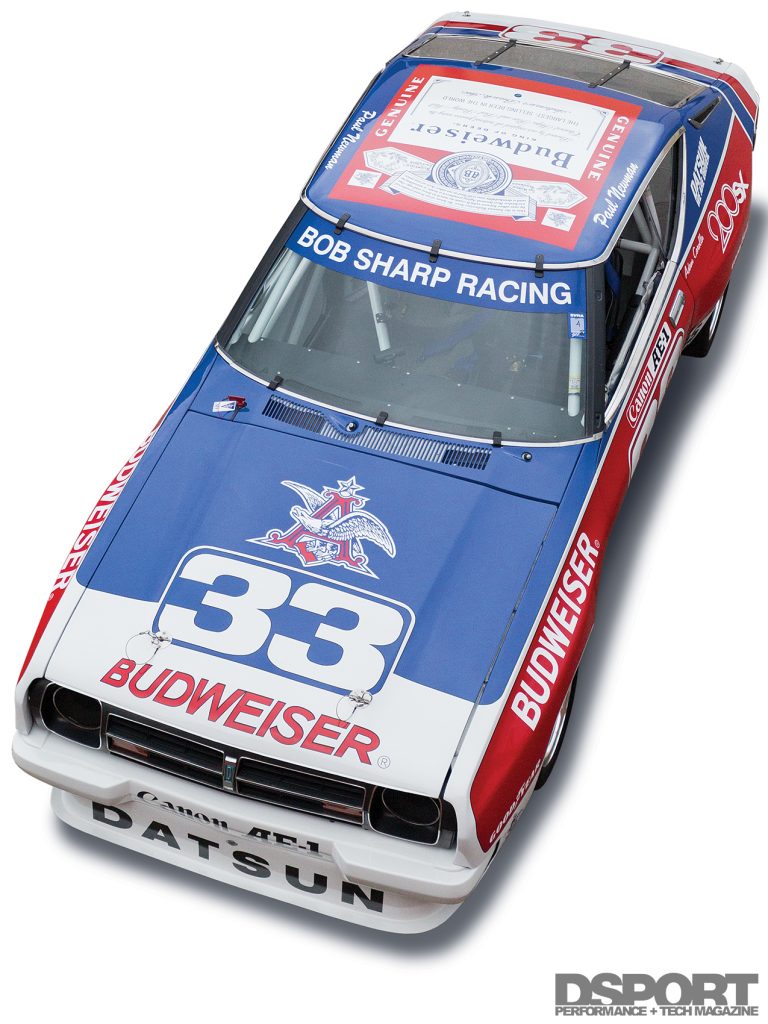