There’s no better proving ground for a car’s strengths and weaknesses than on the racetrack. The twists and turns separated by straightaways and high-speed bends test every element of a car’s driving characteristics, from the engine’s powerband to the chassis’ ability to stick to the road. Our first stage of the DSPORT Ford Fiesta ST build delivered 10 extra horsepower and 43lb-ft more torque to the wheels. Along with the additional power, a 150 lb weight reduction lightened the factory platform. The resulting two-second gain in lap times showed the value in our street performance brake pads, intake, tune and other upgrades, but also revealed some areas for improvement. As the Fiesta ST entered the second stage, we placed focus on raising the power further while enhancing the car’s capabilities through corners. Text by Cameron Parsons // Photos by Aaron Eusebi, Cameron Parsons and Jeren Walker // Illustrations by Paul Laguette 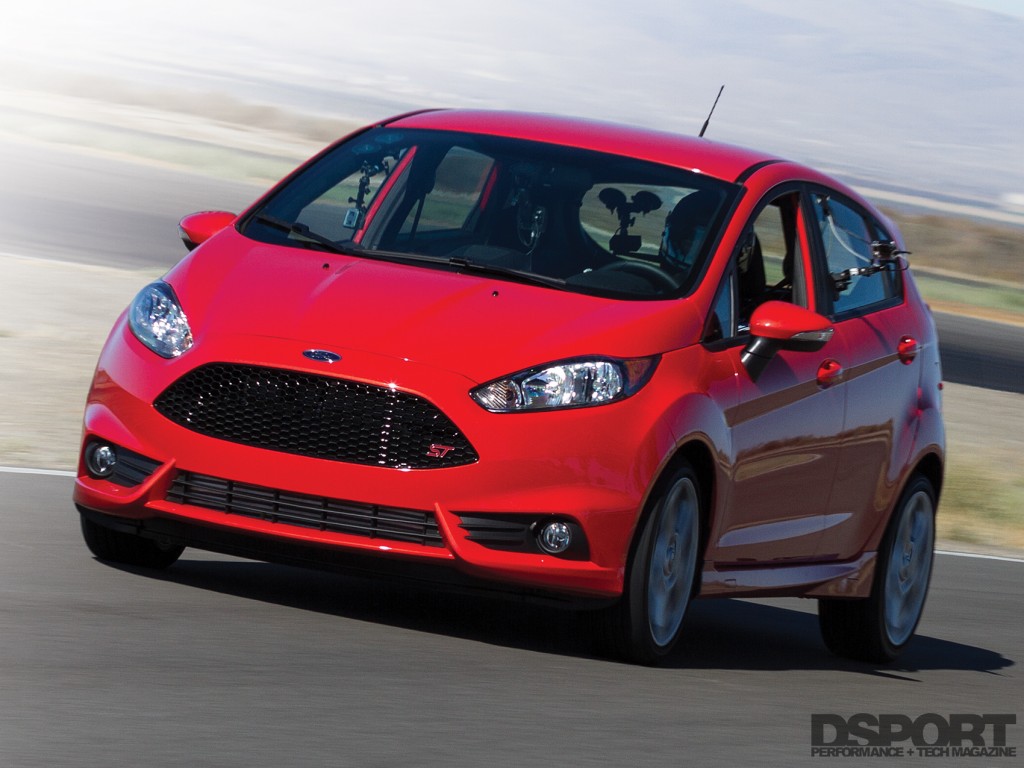 Our previous journey to Buttonwillow with the Fiesta ST in its first stage brought a significant improvement in lap times, two full seconds quicker than the car could pull off in factory trim. The additional power, shorter shifts and grippier brake pads worked together to benefit the speeding up and slowing down, however, there was more to be desired through the corners. Yes, the Fiesta ST holds a strong reputation for how it darts into the turns, but there was still room for improvement. When it came to power, the little hatchback came alive in its midrange RPMs in the first stage. This helped greatly in most of the medium-to-low speed corners, but not enough on the long straightaways or really tight corners. With the search for more power in mind, we called up mountune USA and Bill Knose of Delicious Tuning to help us on our way.

The first stage utilized a mountune Induction Upgrade Kit and ECU recalibration to raise the power from 183whp to 193whp and the torque from 211lb-ft to 254lb-ft. For stage two, we installed a mountune Intercooler Upgrade, built with a seven-row extruded tube and fin core to increase the heat-fransfer efficiency of the air-to-air intercooler system. On the other side of the engine, we swapped out the factory exhaust for a mountune High Flow Cat Back Exhaust and Sport CAT Down Pipe. Mountune designed the down pipe to reduce exhaust back pressure at the turbocharger to allow for faster response and in turn, more power. The five-inch diameter catalyst sits between the three-inch tubing that mates to the turbocharger and exhaust. The cat back exhaust system delivers the spent gasses through its 2.5-inch stainless-steel tubing, through the Helmholtz chamber design rear silencer and out the 3.25-inch polished stainless-steel tips.

With the pieces in place, Bill Knose of Delicious Tuning stepped in to help extract the full power potential of the stage two power upgrades via Cobb Accessport. It was no surprise that the power figures went up, however it wasn’t in the way that we expected. After the Fiesta ST took to the new ECU mapping, it wrung out 204whp and a whopping 296lb-ft torque. This demonstrated a 6-percent increase in wheel horsepower and a 39-percent increase in torque. 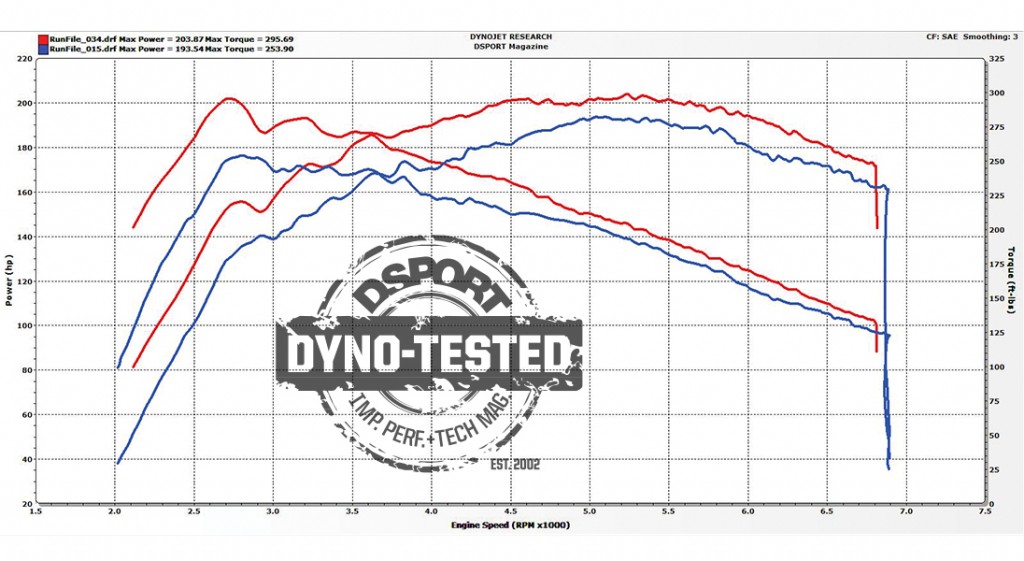 Stage One vs Stage Two 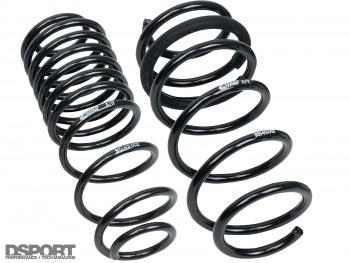 The newfound power led us to hunt down methods for planting the tires to the ground through corners. We turned to Eibach to help tune the Fiesta ST for additional grip. First, we installed Eibach’s 25mm rear Anti-Roll Sway Bar Kit to stiffen up the chassis and reduce body roll. As for the suspension, we retained the factory shocks for this stage but upgraded the springs to Eibach’s Pro-Kit Performance Springs. These springs drop the car 0.8-inches in the front and 0.7-inches in the rear, lowering the car’s overall center of gravity to reduce excessive body roll and nose diving. Fully realizing the effects of these hardware changes requires dialing in the appropriate alignment. Thankfully, Eibach has the research portion of this task handled, so that anyone can navigate to the company’s website and view the optimal alignment specs for the springs. For the Ford Fiesta ST, the Pro-Kit springs called for -1.2-degrees of camber, 4-degrees of caster and 0.1-degrees toe in the front. The rear alignment settings demanded -0.6-degrees of camber and 0.2-degrees of toe in the rear. For this application, these settings sit very close to the factory setup to allow for streetability while raising performance. On the hunt for improved lap times, we hauled the Fiesta ST up to Buttonwillow Raceway to race against the stopwatch on the 2.68-mile 13CW configuration. 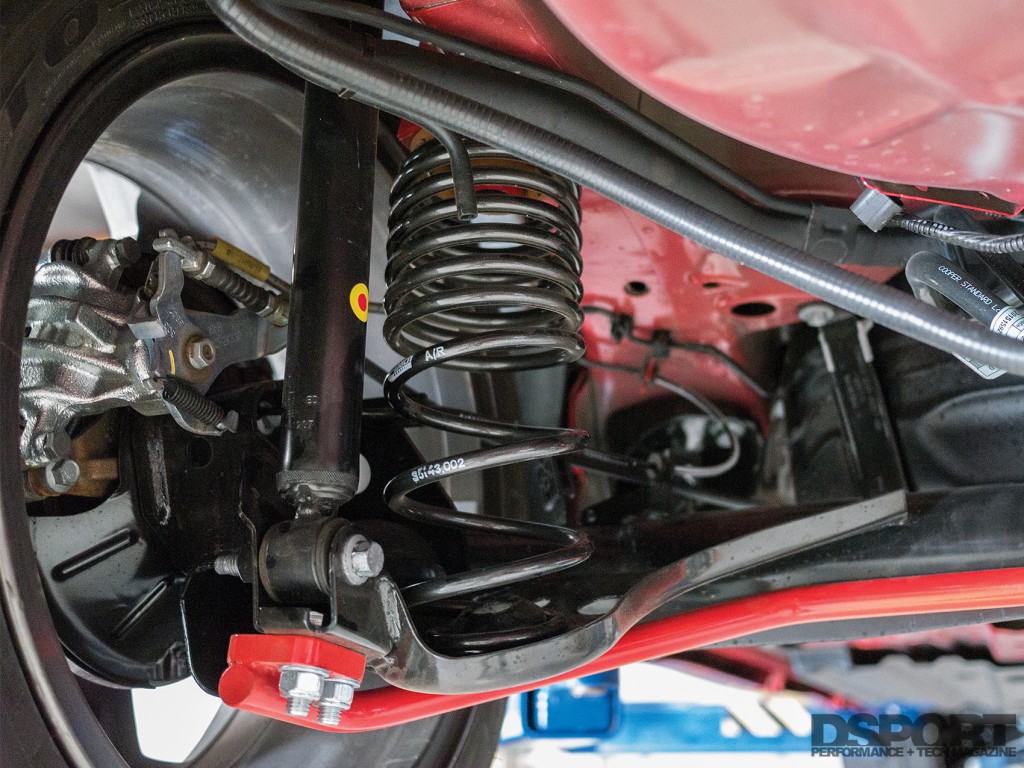 Gain Some and Lose Some

Making use of lessons learned from the previous stage tests and our day of tire pressure tuning (issue #160), we set the tire pressures for the track conditions and set out to lay down some laps. The first few laps on track revealed a very different car from what we tested before. That does not necessarily mean that the car felt better, nor did it feel worse, the handling characteristics of it simply changed and called for a different style of driving. 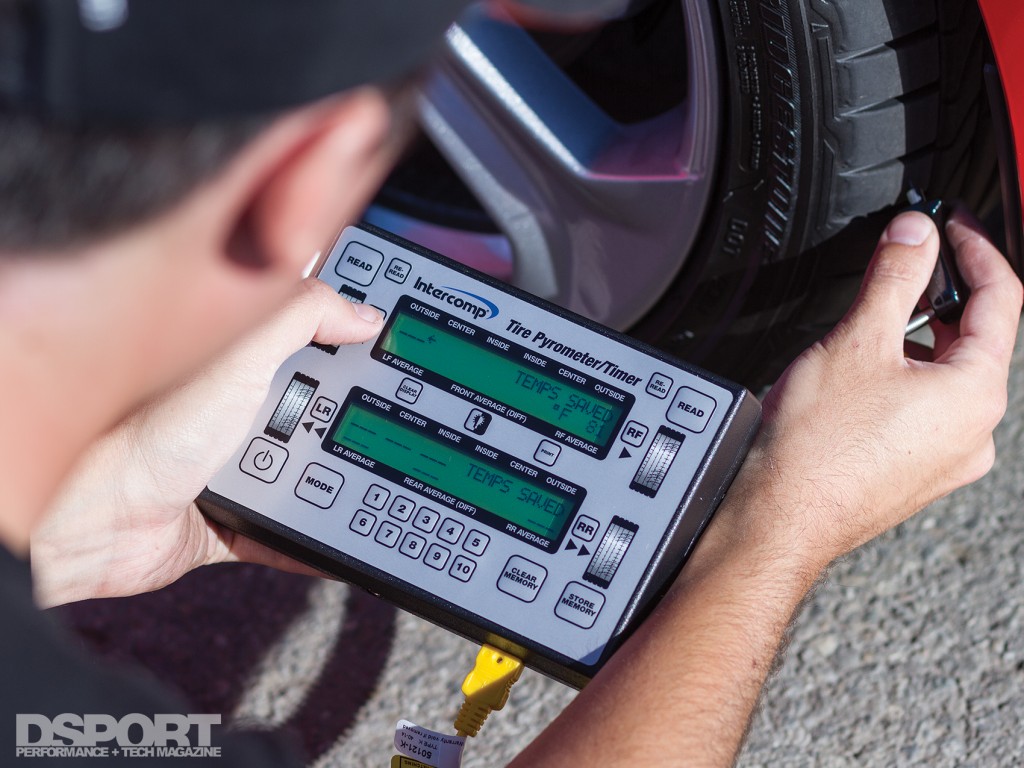 Keeping track of tire pressures, temperatures and wear patterns can tell you nearly everything you need to know about the effectiveness of your car’s chassis and suspension setup.

In the earlier stages, the Fiesta ST liked driving on its nose and demanded the back end to swing around like a trailer in order to lay down fast laps. The higher performance springs and especially the rear sway bar stuck the car to the ground harder than before, especially at the turn-in point of corner entry. This made it difficult to achieve the desired car rotation before apexing and throttling out, requiring some extra trail-braking and aggression on the steering to really throw the car into the turn. Although the handling upgrades changed the driving style in the tighter turns, the real payoff appeared in the higher speed sections. The Fiesta ST’s ability to withhold higher, sustained lateral forces through mild esses and sweeping turns added driver confidence in the car while shaving off precious tenths of a second. 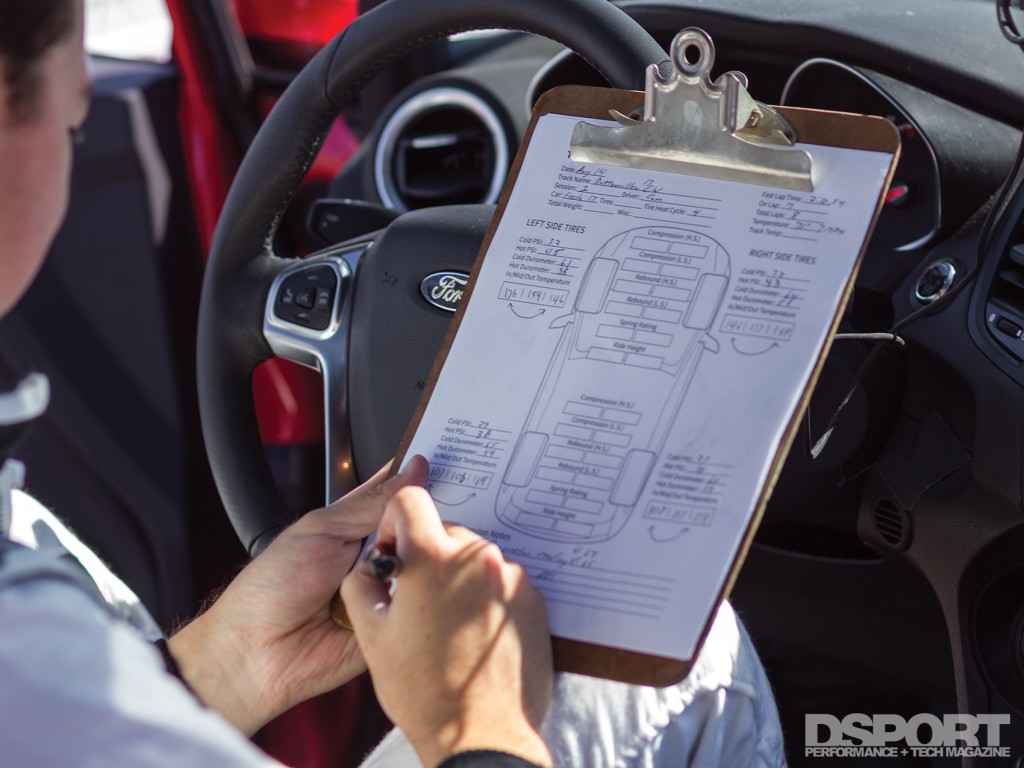 Both subjective and objective notes were recorded before, after and during each track session. This information combined with the raw data acquired from the vehicle and track gives great insight to the vehicle’s performance.

Stage two of the Fiesta ST build also brought better launches out of the corners. The front wheels, now pulling with 204 horsepower and 296lb-ft torque, carried the car out of the low speed and medium sections with ease. However, the factory-equipped Bridgestone Potenza RE050A tires quickly found their limits with this much torque. While the power upgrades provided literally more than enough power in the low and medium spots, the Fiesta ST still struggled to impress on the high-speed straightaways. 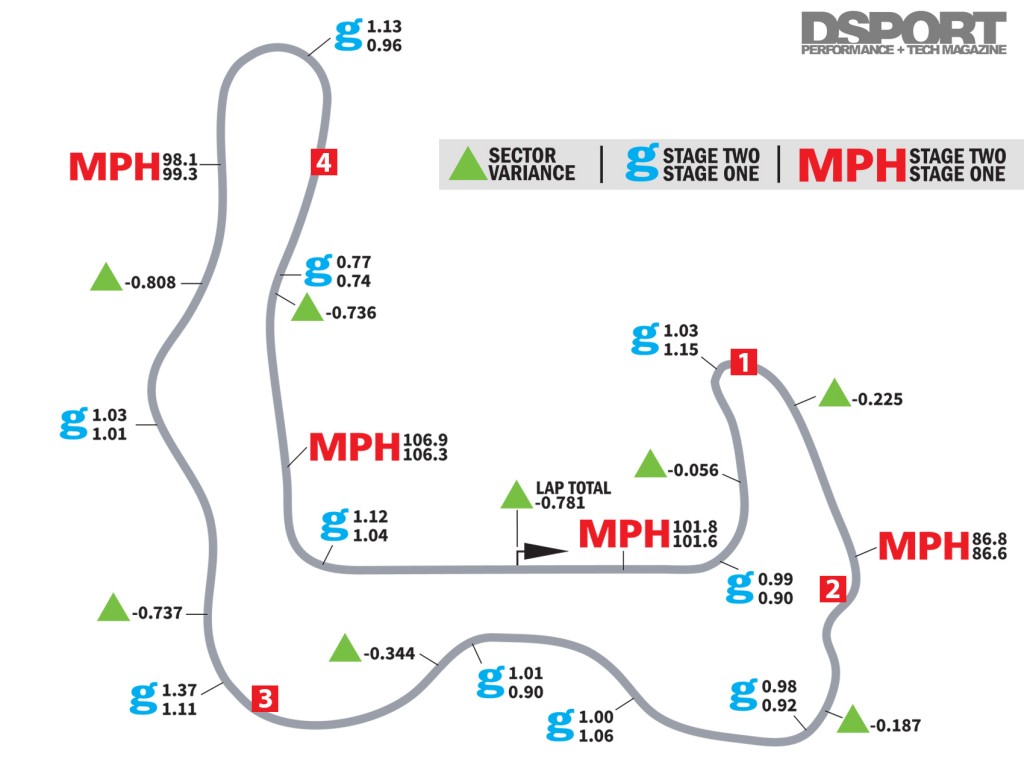 1) The tightest corner of Buttonwillow Raceway demands car rotation at slow speeds, an area where the Stage Two Fiesta ST struggled. Luckily, the low-end torque helped pull the car out of the turn. 2) The slower speed right-left-right section requires a chassis that can change direction quickly. The Fiesta ST struggled to achieve this, and lost some time here for the overall lap. 3) The spring and sway bar upgrades paid off big time in the fast sweeping turns, demonstrating a strong ability to maintain high lateral g-forces and rolling speed throughout. 4) Following the wide 180-degree sweeper turn and into the esses, the Fiesta ST strived to stick to the ground, yet the direction changes again were difficult to achieve without a notable amount of understeer. In these areas, the springs and sway bars did too good of a job in increasing grip where we actually wanted the rear end to drift.

Once acclimated to the different driving style that the stage two Fiesta ST demands, there’s no denying that the car found more speed. Utilizing mountune’s intercooler and exhaust upgrades with a retune, paired with Eibach’s springs and rear sway bar sent the car around Buttonwillow Raceway nearly a full second quicker. While the first stage saw a best time of 2’12.497”, the second stage build consistently delivered lap times in the high 2’11s with a 2’11.716” topping our list. The Fiesta ST in its second stage build still brought streetable qualities (minus the deleted passenger and back seats). The car handled dips and bumps in the road with little discomfort, and maintained a throaty exhaust note without pushing any limits of comfortable volumes. Taking notes on the car’s strengths and weaknesses on track, we proceeded to build the to-do list for the next stage. We aimed to approach this stage with an even stronger focus on the car’s overall handling performance. This meant stepping up the brakes and suspension to a whole new level, while making the car as light as a feather. Stay tuned for stage three of the DSPORT Ford Fiesta ST. 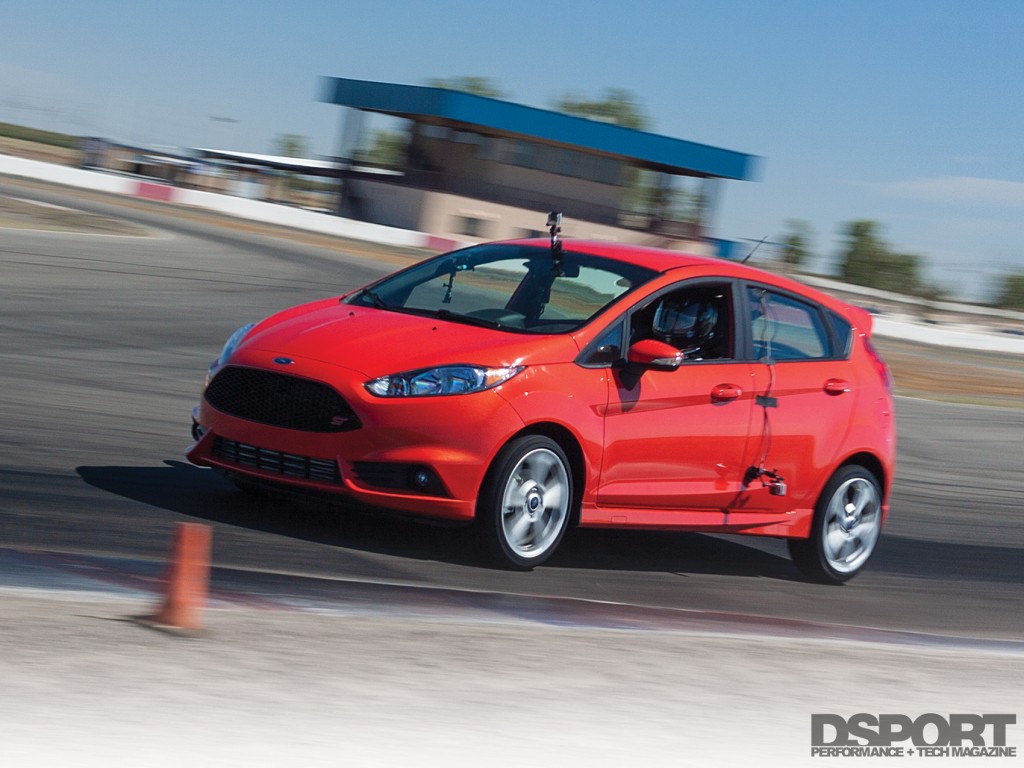