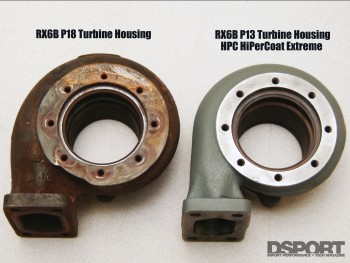 We have changed the turbine housing to the smaller P13 units and now the tuning is no longer matched to the engine’s boost characteristics. It’s time for a trip to XS Engineering in Huntington Beach, California. XS Engineering just recently acquired a four-wheel Dynamic Test Systems dynamometer and it was time for the DRAG Sport RH9 Project GT- R to see what it could do on this new dyno. Fortunately, XS Engineering has the talents of Power FC tuning-guru Eric “Dai-Lo” Hsu in house. His expertise and hardware would be exactly what was needed to datalog and tune this RB26DETT to maximum power.

563 Ponies for the Street

Our first attempt proved to be a waste of time. We couldn’t get the engine to make more than 1.0 bar of boost, even though we tried to manipulate the wastegate spring pre-load to generate more than 1.0 bar of boost. We later learned that we had a boost leak at the compressor discharge of the rear turbo. Once we placed the intercooler pipe back in place and replaced the faulty clamp, it was back to the dyno. Now, making boost was not a problem.

For the street, we elected to tune the engine up to 1.2bar (17.5psi) on 91 octane pump gas (the best we can get in California). We were pretty happy with the outcome. After a series of about six pulls, we generated 563.8 horsepower at 7750 rpm.

Now it was time for the race gas, specifically VP Racing Fuel C-16 racing fuels. On the Power FC, we set our target boost to 1.60 bar (about 23.5 psi). By our second pull at this boost level, we hit 749.3 horsepower at 7825 rpm. However, the datalogging indicated that we were on the ragged edge of tuning. The air-fuel ratio was at 13-to-1, the knock sensor readings were about to go crazy and we basically had no margin of safety. Although our stock engine held up to everything we had thrown at it so far, we needed to be able to drive to the race and drive back. We needed a factor of safety in the tuneup. It was decided to richen up the mixture to an 11.8-to-1 air-fuel ratio and cut back on the timing to bring the power to the 675 range with a nice safety margin. 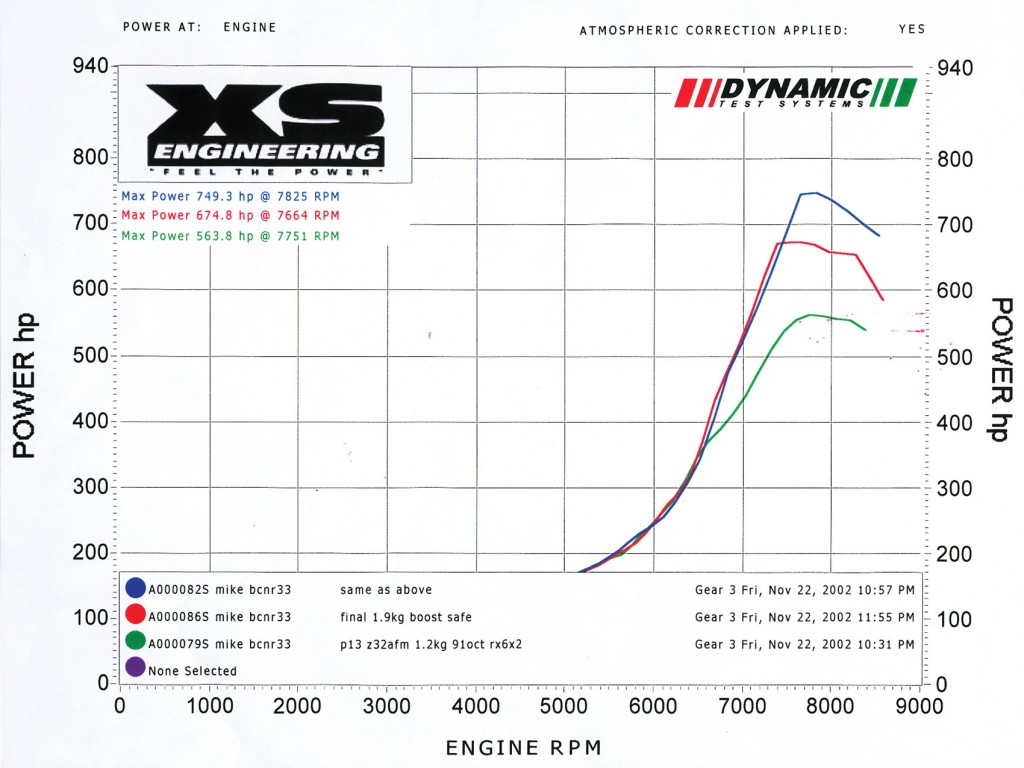 When the dyno rounds were complete, we had a setup that reached full boost about 800 rpm sooner and made more horsepower than ever. It was time for our GT-R to run a number.

With my responsibilities (Race Director/Announcer) preventing me from driving my own car, I would rely on my good friend Wen Lai to get the job done. Wen owns a R33 himself and we are always pushing each other to make more power to go quicker and faster. Going quicker and faster in the DRAG Sport GT-R is no easy task as this car is very difficult to drive. With the driveline being stock and the turbos bringing new meaning to the word lazy, the clutch needs to be severely slipped off the line to bring the turbos into boost and to prevent the front differential from breaking. Wen gave it a few tries and had very little success, managing 13- and 14-second passes. It was time to find a substitute announcer and get things done myself.

I jumped into my car and made my way through the staging lanes to make a pass. Around the burnout box, I pre-staged the car. I then bumped it into the staged beam when my competition lit his pre-stage light. Mashing the gas pedal to the ground, the engine came up on the two-step set at 7200 rpm (the A’pex Integration Power FC two-step is one of the best available. There’s no need for any external switch. The Power FC uses the factory speed sensor. If the vehicle is not in motion the two- step rpm limit is set. Once the car moves, the rpm limited returns to the max rpm limit). Bouncing on the limiter, the boost slowly climbed to about 10 psi. The lights dropped to green and the clutch was ridden until the boost hit its peak. Power shift to Second and the GT- R is on a pass. In an instant, it’s time for the power shift to Third. As the rocket works through third gear before the 1000 foot mark, I grab for Fourth. It’s not there. Again. Still not there. Just grinds and no gears. The GT-R coasts through to an 11.8 at 112mph. A run that should have, could have and would have been in the high 10s. We would have to wait for another time to accomplish our goal of 10s on the stock engine.