The DSPORT office parking lot is filled with staff projects and D’Garage cars both old and new, but none of these come close to matching the longevity of Tyler Hirashima’s 366,000-mile AP1 Honda S2000. The car was first purchased new in 1999 by his father and then passed down to Tyler when he turned 16 in 2004. Between them, the car stacked up its miles as it was always daily driven and never a garage queen. Now, Tyler is getting the itch to put his car on the race track on a regular basis. Although the S2000 is a platform seemingly made for autocrosses and track days, this car isn’t ready to turn laps just yet. As Tyler’s car nears the second decade of its life and rolls ever closer to the 400,000-mile mark, we’d first have to address the worn drivetrain and suspension components to ready it for future modifications. 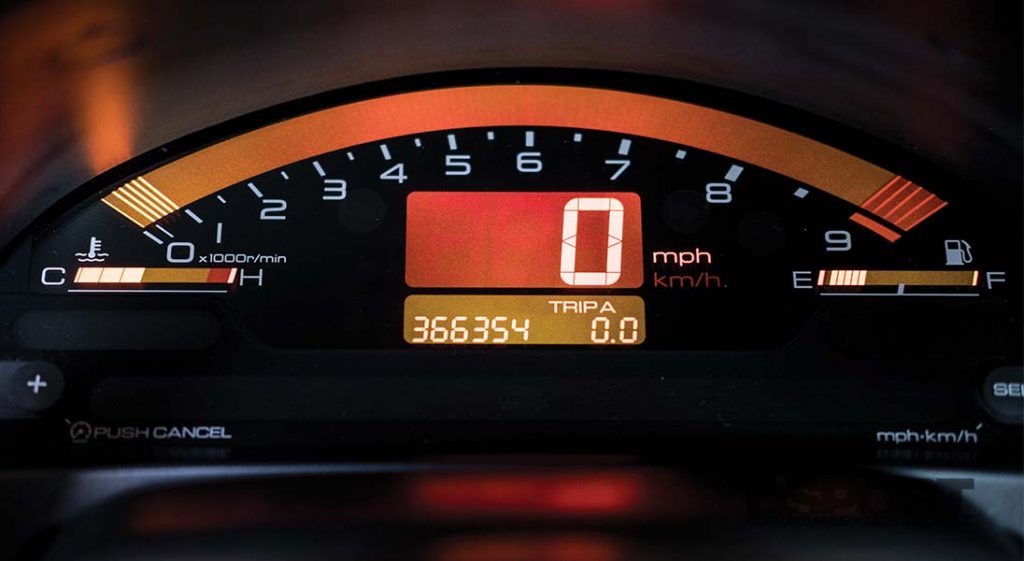 Tyler’s on-track experience entails little more than turning laps at the local K1 Indoor Karting Center and riding passenger in a drift demo. However, there is a trace of motorsports in his blood. His great-uncle Takeo “Chickie” Hirashima worked as a riding mechanic on IndyCars in the late 1930s, and later built race-winning engines in the IndyCar series for the next 20 years. Tyler’s racing aspirations don’t quite measure up to the scale of professional racing for a career, but he does plan to finally start tracking his S2000 on weekends. The car served as his daily driver for the past 15 years and has never touched a racing surface. This won’t be the case for long, but first we had to restore any tired components back to full working order. 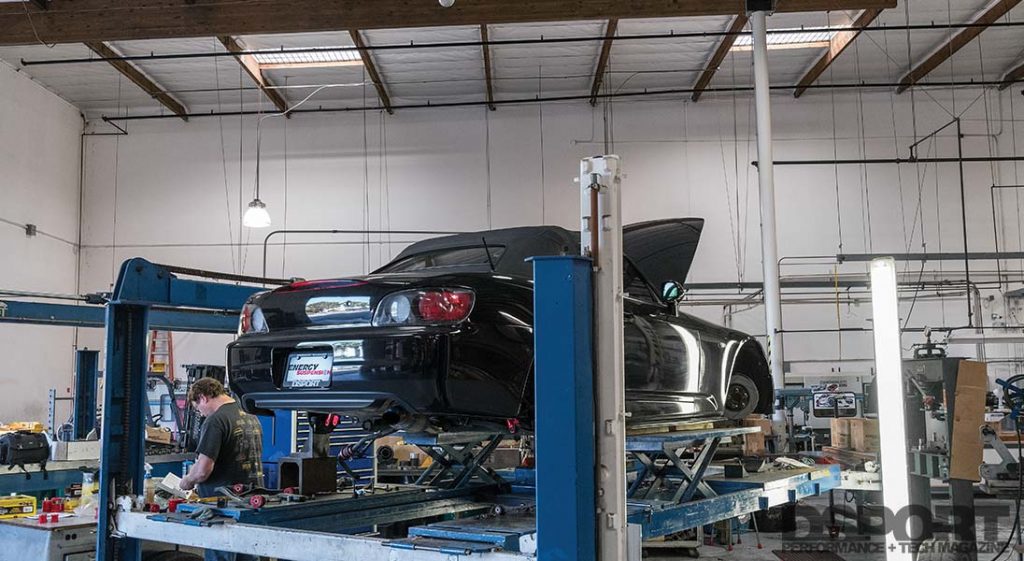 Tyler’s S2000 was risky and at times downright dangerous to drive at the limit. Under braking and turning, the car felt unpredictable as the steering input and suspension components felt sloppy and inconsistent. Pair that with a slipping clutch and he had a project on his hands that was more frustrating than fun to drive. A look at the underside revealed much of what he’d have to deal with. To no surprise for a car with this many miles on it, the list started with bushings. 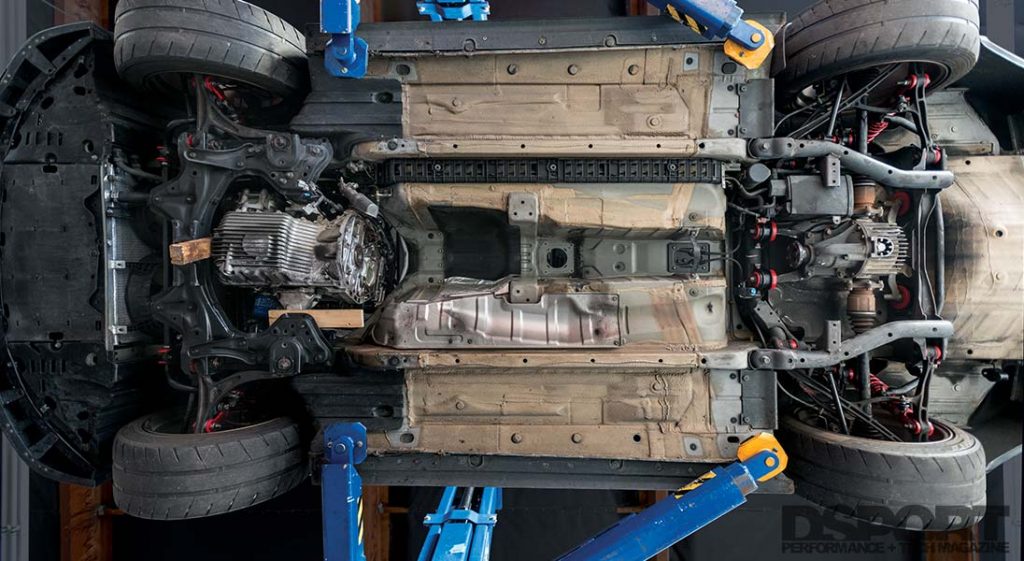 The benefits of most chassis and suspension modifications can’t be realized with tired bushings. The factory bushings are made up of rubber or rubber enclosures filled with fluid, and reside in areas where suspension components mount to the hubs and chassis, as well as in other areas like differential mounts and sway bar mounts. The soft rubber material reduces shock and vibrations but at the expense of additional slop, reduced responsiveness, and shorter lifespan. While some of the factory bushings on the S2000 lasted surprisingly well, others wore well past any useful condition. This was especially notable on the areas of the front suspension arms that affect toe, where worn bushings allow the front end to actively change its alignment. In order to bring the suspension back up to proper form and better, we turned to Energy Suspension’s polyurethane solution.

(L) Energy Suspension’s polyurethane bushings filled in for the worn rubber that had to be pulled, cut, and burned out of the suspension components. (R) The ball joints had only been changed in the car’s 366,000-mile life, calling for a long overdue replacement.

The D’Garage S2000 took to updated control arm, differential, and sway bar bushings all around to last longer than the factory rubber and to improve the car’s handling characteristics. With the help of Energy Suspension’s harder and more durable polyurethane materials filling in these areas, the S2000 would see less unwanted play between the components. This in turn helps the car respond to inputs immediately and consistently. 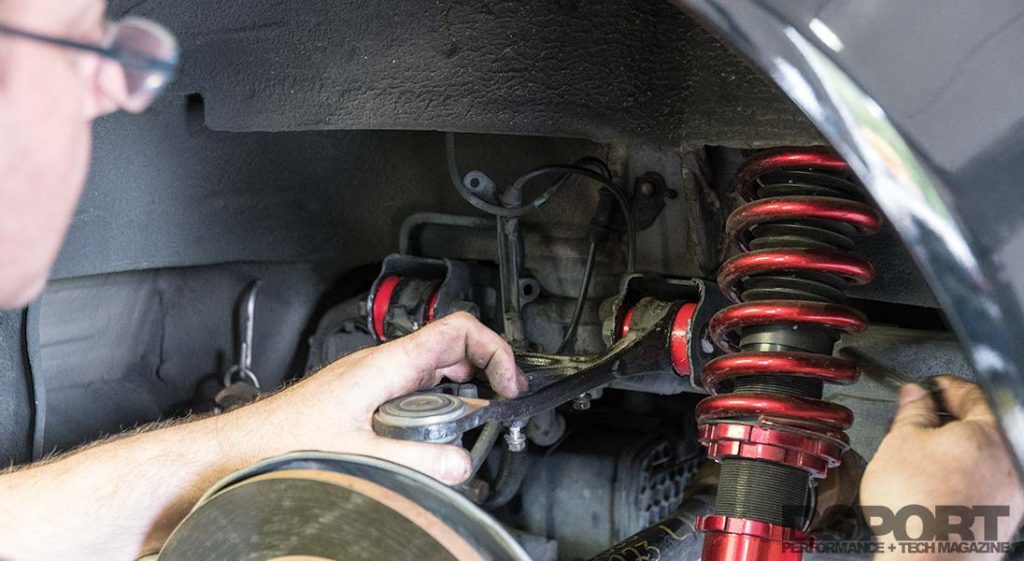 Hanging by a Thread

While some of the S2000’s original bushings lasted surprisingly well, the same could not be said for some of the other chassis and suspension components. We discovered that the factory motor mounts were completely broken, offering no real support for the engine except for a place to sit. Each of the ball joints and sway bar end links were in similar shape. Given that Tyler aims to track the S2000, these components called for immediate attention. 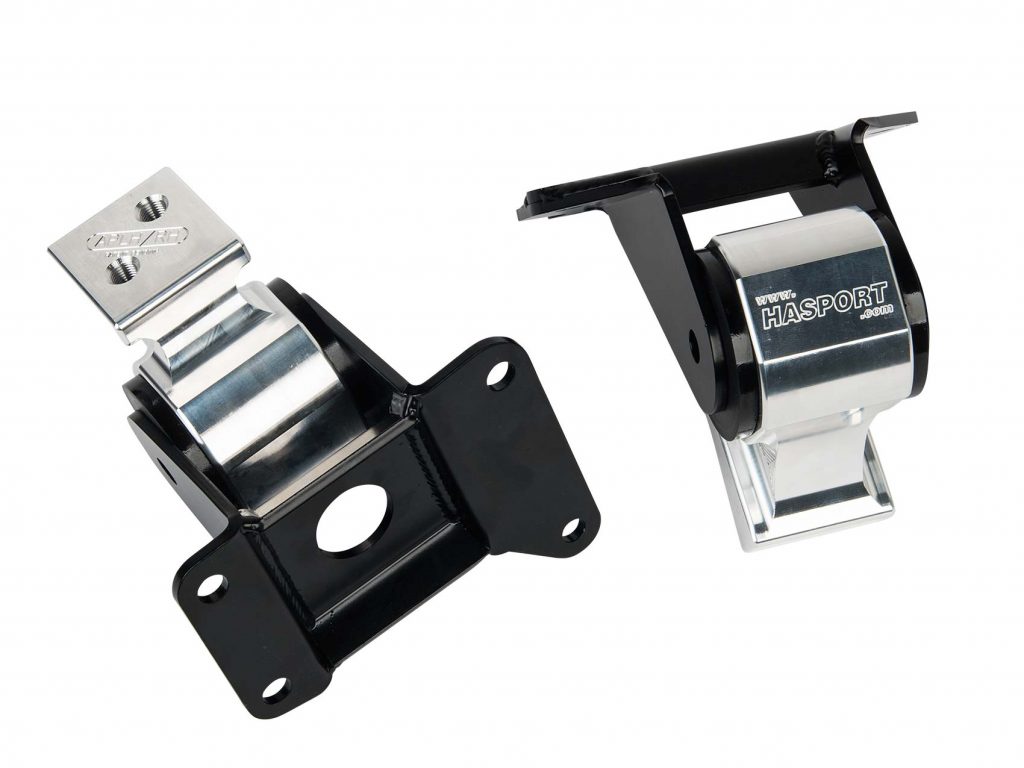 Hasport motor mounts and SPC ball joints replaced the aged and broken components, offering much greater durability to put up with track use.

In order to support the engine against the stresses of track conditions, heavier-duty motor mounts had to fill in for the factory equipment. To this end, we elected for Hasport’s Motor Mount Kit for the S2000. The mounts in this kit are milled from T-6061 aluminum billet with different offerings for urethane hardness, depending on its use. Since the car would be splitting time between the street and the track, we installed the 62A “Street” urethane option. 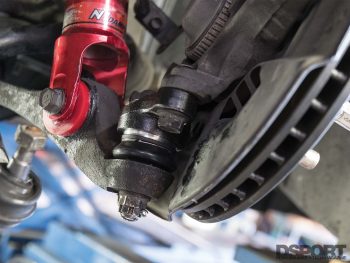 A large amount of the car’s instability was due to excessively worn ball joints. Replacement OEM ball joints filled in for the front lower control arms, but we decided to make some changes to the remaining six locations. Buddy Club P1 Racing Ball Joints went on the lower rear control arms, offering a taller design than factory to lower the car and optimize its rear roll center by bringing it closer to the vertical center of gravity. SPC Performance’s Adjustable Ball Joints replaced the factory upper ball joints at all four corners. These ball joints allow for an additional 1.5 degrees of camber adjustment per wheel, making them ideal for quickly and accurately dialing in the car’s setup. 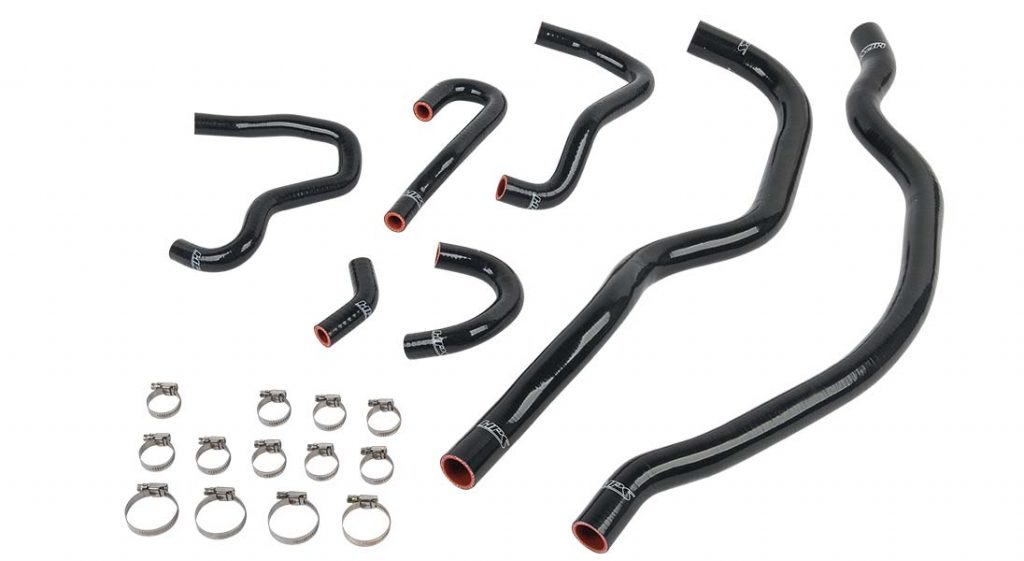 Just about every rubber component under the hood was due for replacement. A kit of HPS reinforced silicone hoses went in place of the old rubber, offering higher heat tolerances and greater longevity.

Since the car spent some extra time on the lift and so many components were coming out, we swapped in a few other regular maintenance items. First, the aged OEM battery came out for a Dyna-Batt replacement. At a weight of 14 pounds, this battery weighs only half that of the stock one and requires less real estate in the engine bay. Next, the steering rack and sway bar end links were swapped in with OE replacements to tighten up the steering characteristics even more. Since the car is nearing the second decade of its life, rubber components in the engine bay also began showing their age. Dried-out cracks haven’t yet plagued the hoses, but they have long since lost their elasticity. A set of HPS reinforced silicone hoses replaced the OEM rubber to better tolerate the higher temperatures associated with racing and hard driving. 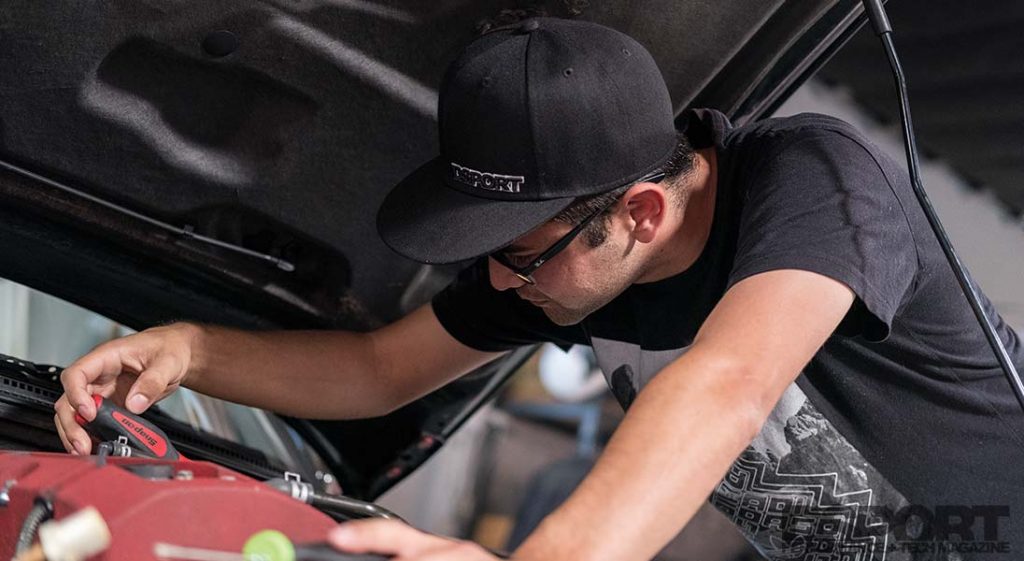 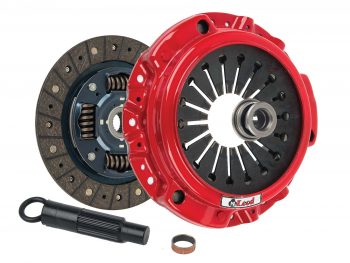 Aggressive shifts on track and the potential for more power will introduce more heat and a greater chance of clutch slip. We had McLeod Racing’s Street Tuner Clutch installed to ensure that these sorts of problems won’t arise in the future. The steel-backed disc provides higher clamp load and burst strength, good for approximately 20 to 25 percent more power over the factory output. The S2000 puts down approximately 210whp in its current form, so this capability for more power is just right as Tyler has no plans to add any means of forced induction in the future.

Tyler’s S2000 still has some unfinished business before hitting the race track, but the car is inching ever closer. The restoration and replacement of the many worn components provides the foundation to realize the full benefits of future modifications. Now that these items have been addressed, Tyler can shift focus toward larger scale upgrades. With sights set on sprucing up his driving skills for the track, power and drivetrain upgrades will remain on the back burner for the time being. For now, updates to braking and suspension sit next on the checklist. This will give Tyler the opportunity to learn and hone his driving technique on track without developing the bad habits that come with more power. Stay tuned as we turn this 366,000-mile S2000 into one of the highest odometer track toys you’ll find on any given weekend.