They said it couldn’t be done, so we did it. Had we been among the flock of misguided sheep looking to forums religiously, chances are that our engine combination would be very different. Following BAD forum advice would have likely resulted in missing the targeted horsepower goal while experiencing engine failures along the way. Taking a better path, we relied upon the engineering, engine building and engine development knowledge and experience that we have here at DSPORT. Text by Michael Ferrara // Photos by Jun Chen 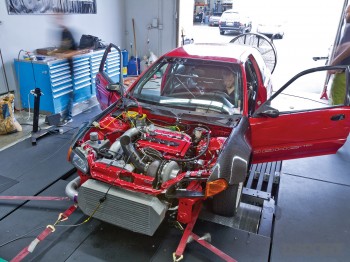 Since there is not another automotive publication in the world that has a staff with Champ Car, Formula One and multiple 1,000whp street-engine building experience, we decided to put it to good use. As one of the first engine projects to come out of our newly-opened Club DSPORT Engine Development Center, we’re proud to say that we hit the mark on the engine’s first dyno session. A week-and-a-half later, we added another 40 horsepower with some finer tuning on our second dyno session. This session took the 2.0-liter B-series to the 1,055whp mark on $3.29/gallon E85 straight from the pump. After 40 pulls, the engine is doing great. Cylinder leakdown percentages are still holding under at the same post-break-in levels. Now that the dyno has provided us with the personality profile of our current engine combination, we’ll focus on the driveline and supporting gear needed to manage and deliver this power to the ground.

The Combination, Our Way 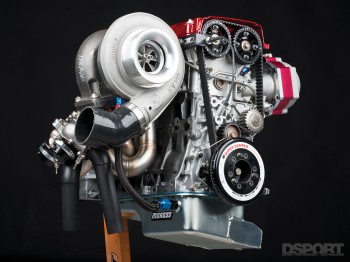 What is perhaps most surprising about the engine that we built is that we didn’t make any real “race-only” concessions. There is no dry-sump oiling system, no short-life high-rate valve springs, no titanium intake valves, no aluminum connecting rods, no custom pistons, no stepped-deck sleeves, no o-ringed cylinders and no partially-filled engine block. Our oil systemupgrades consist simply of a Moroso 5.5-quart oil pan that uses the factory oil pump pickup (p/n 20910). The Supertech valve springs that we selected will likely last an entire season or more. The intake valves are Supertech stainless steel shelf stock, factory diameter units. The connecting rods are shelf-stock forged steel Carrillos. The pistons are shelf-stock CP Pistons. Finally, the engine block is not-filled with any block-filler or concrete. What sets the DSPORT B-series build apart from the 98-percent of the “built” Honda engines out there is the level of precision in the machine work and blueprinting. Whereas others may strive for a tolerance to the closest thousandths of an inch, we target a much narrowed window of 1 to 2 ten-thousandths of an inch. Higher tolerances and top-tier assembly experience produce a best-case example. Of course, having a proper engine management system from MoTeC along with a capable and qualified tuner is also key to extracting maximum reliable performance. 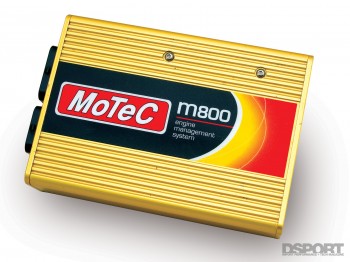 This project has allowed us to learn more about the capabilities of the MoTeC M800 series of engine management systems. The M800 has had zero issues in controlling and blending the activation of both sets of injectors (8 total). The MoTeC is also capable of being configured with a variety of factory and aftermarket sensors. We are currently using MoTeC Bosch UEGO sensors, a Honda crank angle sensor, a T1 Race Development cam position sensor, five AEM Electronics pressure sensors (MAP, oil pressure, fuel pressure, clutch pressure, coolant system pressure) and six AEM Electronics EGT sensors (one for each cylinder, one mounted on the turbine entry and one mounted in the downpipe. Acquiring engine data at ultra high sample rates is critical to fine tuning and troubleshooting. With James Nero of MoTeC already doing a stellar job on the dyno, we look forward to his support when the car hits the track. On track, James will have the opportunity to put together a launch and boost control strategy that will allow the car to maximize its performance. 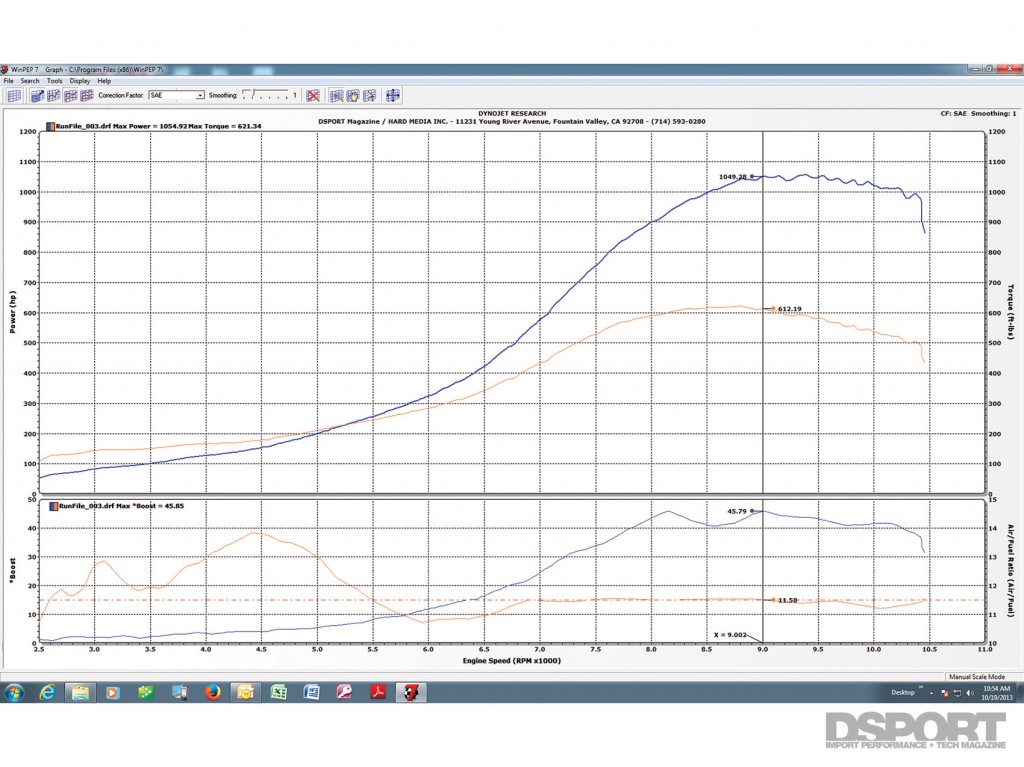 The shape of the power curve establishes the effective powerband of the engine. Our current combination delivers a curve with a powerband exceeding 1,000 horsepower from 8,500 to 10,300 RPM. The curve also delivers a powerband of 900 horsepower or more from 8,000 RPM to redline at 10,500 RPM. A powerband that’s only 1,800 or 2,500 RPM wide would be considered relatively narrow. Narrow powerbands require close-ratio transmissions and usually five or six gears to deliver peak performance. With the B-series transmission, only aftermarket 4-speed solutions are available to handle the 620+ lb-ft peak torque output of the engine. This makes for a serious challenge in getting the powerband to match the wider engine speed ranges of a 4-speed transmission. As for the torque curve, it’s important to look at the shape of this curve relative to the powerband. At 8,000 RPM, torque is checking in at 590 lb-ft and still climbing through about 8,700 RPM. From 8,800 RPM forward, the torque curve is dropping off and delivering a condition called “automagic” traction control. In this range, torque is dropping off while the engine is accelerating. This causes a reduction in the necessary amount of grip needed to avoid wheelspin.
Pages: 1 2
1000+ WHPB-SeriesCivicDragEGEngine TechHondaTurbocharged