As we close out this November issue, we look ahead to the next opportunity to bring our GT-R to the dragstrip. If you remember from last issue, our GT-R managed a 10.34- second elapsed time. While this accomplishment is extraordinary on many levels, we have still not reached our primary goal of collecting the 9- second timeslip in full-street trim. Hopefully, this round of modifications will help us to reach our goal. Text and Photos by Michael Ferrara 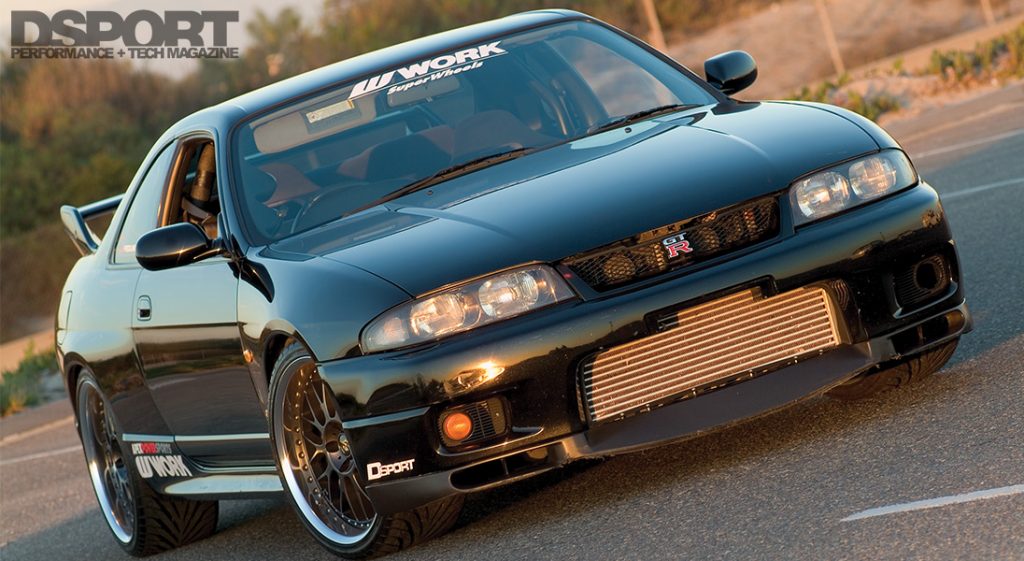 While looking for potential “bottlenecks” in the performance pipeline, we discovered that our Y-pipe may be choking off a few horsepower. The Y-pipe supplied with the A’PEX Integration RX6B twin-turbo upgrade kit is designed to bolt-up to the factory catalytic converter. As a result, the Y- pipe transitions from a pair of 70mm inlets to a single 75mm outlet. This 75mm outlet was considerably smaller than the diameter of the exhaust system (90mm). Hence, we had a potential restriction to exhaust flow. To remove this bottleneck, we decided to build a custom Y-pipe that transitioned from the pair of 75mm inlets to a 90mm outlet to match the exhaust. “Step up, step down, back purge, Inconel, merge collector,” make up 70- percent of the words that we use when we imitate Casey Heerman of Burns Stainless. If you ever have the opportunity to meet Casey, you’ll quickly find out that he’s a die-hard enthusiast that loves his job. This month, we actually needed a custom “merge collector,” and stainless U- bends in both three (76mm) and 3.5- inch diameters (89mm). Since we were using all stainless-steel components, we decided to spend the extra money to have a set of stainless steel flanges water cut. After we had all of the pieces together, we asked Lanny Higa of A’PEX Integration to make it all fit. Lanny cut the pieces and tacked it all together. The tacked assembly was then delivered to Burns Stainless so that it could be backpurged while being TIG welded. This “backpurging” process is accomplished by capping of the ends of the pipes and filling the pipes up with Argon gas. The Argon gas displaces the air that will normally sit in the pipe. Since Argon is an inert gas, no oxidation occurs to the metal during the welding process. The end result is a weld that is stronger and less prone to failure. 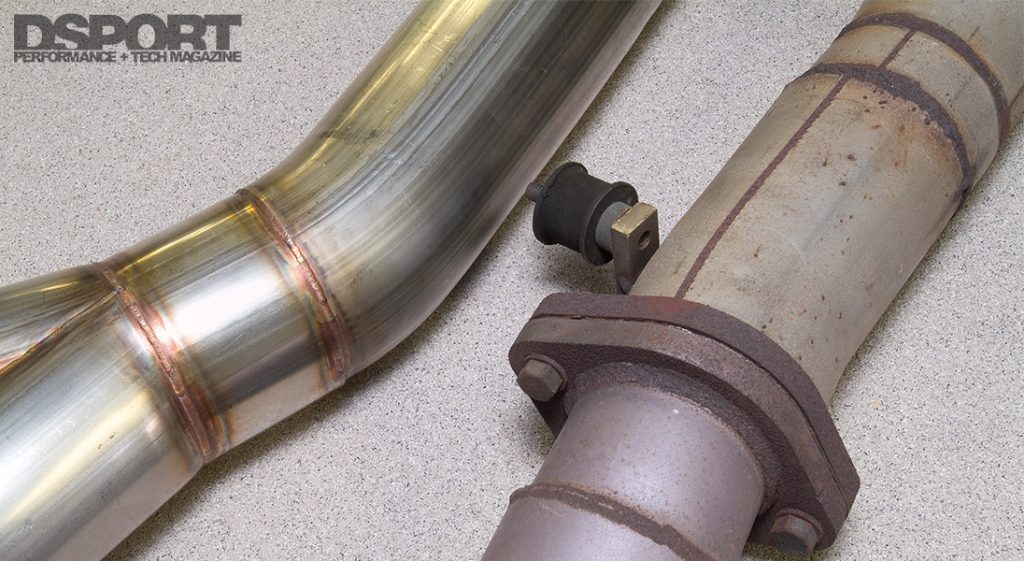 Back on the Dyno

With the new Y-pipe in place, it was time to see if we had increased the power output. With the GT-R strapped to the four-wheel DTS dyno and the same map loaded from our previous session, we soon found that the new Y-pipe delivered an extra 20 horsepower to the wheels at the same boost level. With some further tweaking of the fuel and ignition maps, we ended this dyno session with 761 wheel horsepower. During this test our fuel was VP Racing C16 and our peak boost level was 2.35 kg/cm2 or 33.5psi. 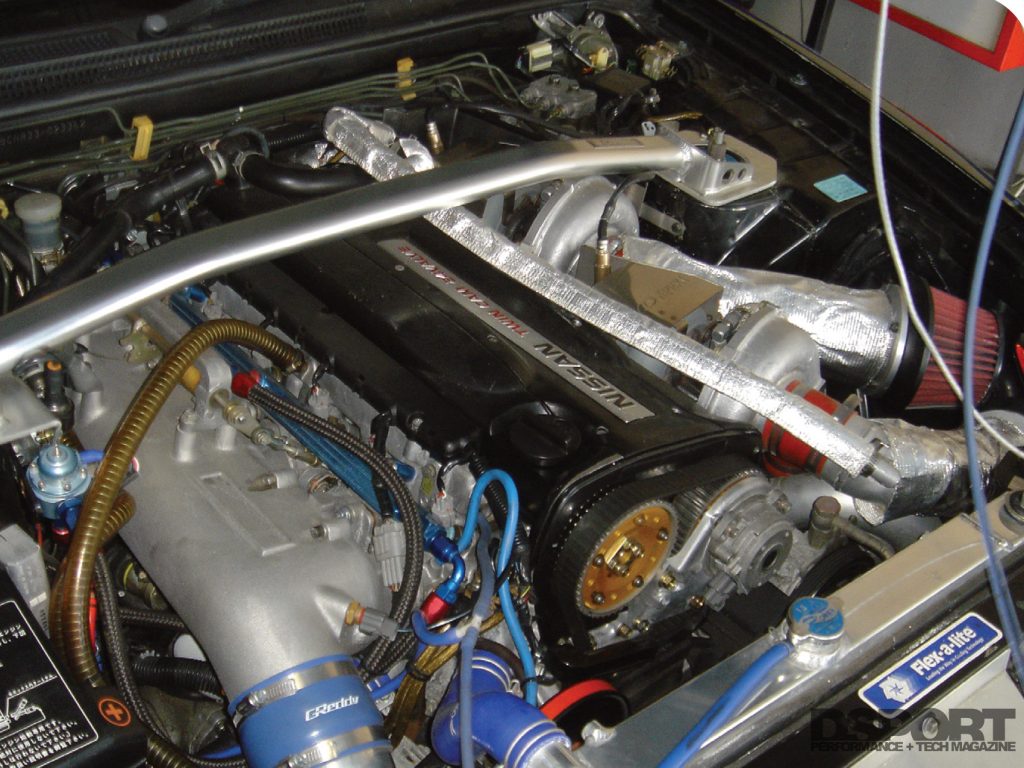 About one week later, we had the opportunity to do some additional tuning on the dyno. This time the performance ruler would be a two- wheel-drive DynoJet 248 dyno. As we fine tuned the curves, more and more power was produced at the wheels. Ultimately, we ended up with 834.8 wheel horsepower with the boost set to 2.45 kg/cm2 (35psi). At this boost level, we began to exceed the limits of our current ignition setup. A few light misfires occurred from 7800rpm until the 9200rpm redline. While we are confident that we could have dialed in the cam timing for about 850 wheel horsepower, it was getting late and we had already made “enough” power for our 9-second mission.

We now have the power to run in the 9s. If everything holds together and the weather cooperates, we plan on dipping into the 9s in Las Vegas at the NHRA Sport Compact event. Next issue, you’ll find out if we reached our goal. As for setting future goals, we’ve looked at the possibility of upgrading the GT-R to run 8s on street tires. Unfortunately, it doesn’t seem feasible in a full- weight R33 and we have no plans to butcher the quickest daily-driver we’ve ever put together. 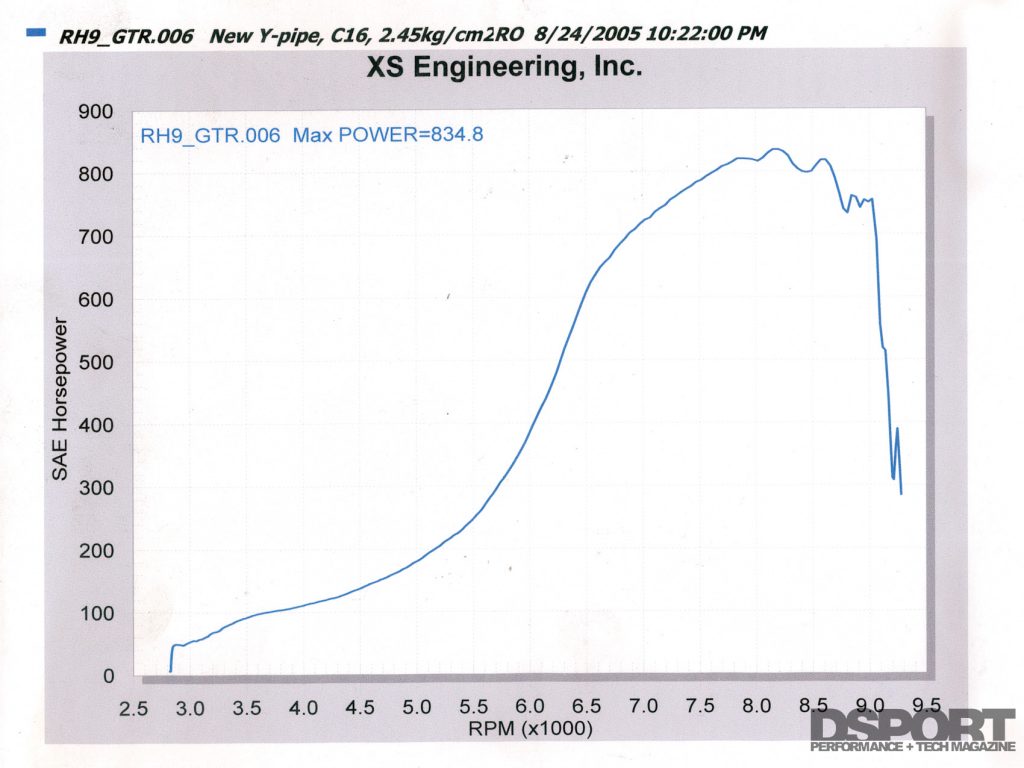 Since we never expected to make so much power with the factory short block in place, we already have a plethora of parts that should add close to 200 wheel horsepower. A “built” long block is currently at the machine shop getting its first round of work. A Nismo N-1 engine block is going to be stuffed with custom 87mm Mahle 8.8-to-1 forged pistons, Carrillo forged-steel connecting rods, an HKS forged 77.7mm stroker crankshaft and ARP main and head studs. This mix of parts will not only add to the strength of the platform, it will also add to the performance as the bigger pistons and longer stroke crankshaft will take the engine’s displacement from 2569cc to 2771.8cc. This alone will directly result in a torque increase on the order of eight percent while also providing the additional exhaust gases to help get the big IHI turbos into boost sooner. On the top end, Portflow Design will be optimizing the cylinder head ports for the high-lift camshafts. These high-lift A’PEX Integration camshafts have the same advertised duration as the low-lift A’PEX Integration camshafts that they will be replacing, but the peak lift increases from 8.9mm to 11.4mm. This higher lift and the optimized ports will result in both horsepower and torque increases throughout the powerband. 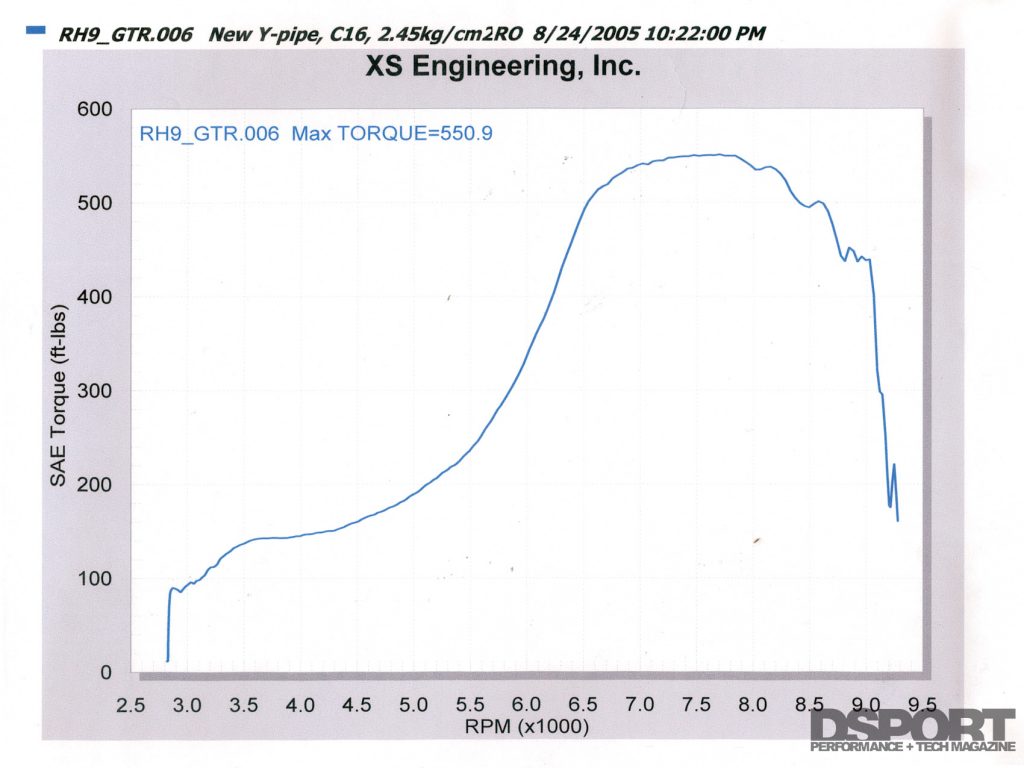 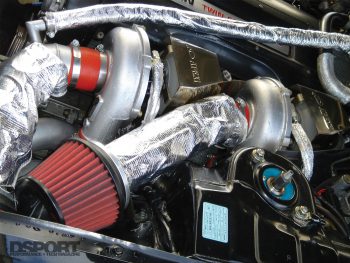 Once we reach the limits with the TCW76L-P16 turbos (we are estimating 900 to 950 wheel horsepower), we may explore more power through both a turbine housing and compressor upgrade. We already have a set of P18 exhaust housings and a pair of TCW77L compressors. The P18 housing is a 0.71 A/R housing that had a 12.5- percent larger choke area than the P16 housing that has a 0.63 A/R. On the compressor side, the TCW77L shares the same 82mm outside diameter as the TCW76L compressor. However, the inducer of the TCW77L measures 61mm making it a 55-trim wheel while the TCW76L has a 56mm inducer making it a 47-trim wheel. The larger inducer of the TCW77L wheel allows for about 20-percent more peak airflow (allowing for 1050 to 1100 wheel horsepower). There are also two additional considerations if more power needs to be made in the future. First, we could switch from the factory-style intake manifold to a big single throttle body setup. This is a popular upgrade for 800-plus horsepower GT-Rs in Japan. Second, we could always put the squeeze on the engine. Not only would a nitrous- oxide system allow us to add 40 to 200 horsepower at the touch of a button, it would also allow us to completely eliminate any and all turbo lag.

With our current power, we expect to see 9.9-second elapsed times with trap speeds in the 143.5mph range. This will require a 1.60-second 60-foot time which should be attainable after a good burnout. Stay tuned.
On August 22, 2015

For decades, the “import performance” market has been synonymous with Japanese vehicles. Toyota, Nissan, Mazda, Subaru, and Mitsubishi have all...

When Kia released the Stinger GT, they proved that they had the ability to build a capable GT platform to...