There’s no denying a streetcar the respect it deserves when it performs as good as it appears. That being said, it’s not uncommon to see a show car equipped with high-end competition components and a dyno sheet to validate its potential. But in order to preserve the appearance and to keep cleaning to a minimum between shows, these machines rarely hit the track or street. But for those that build their cars to drive, wear and tear be damned if it stops them from really putting their ride to the test on the street, strip or road course. Text and Photos by Richard Fong 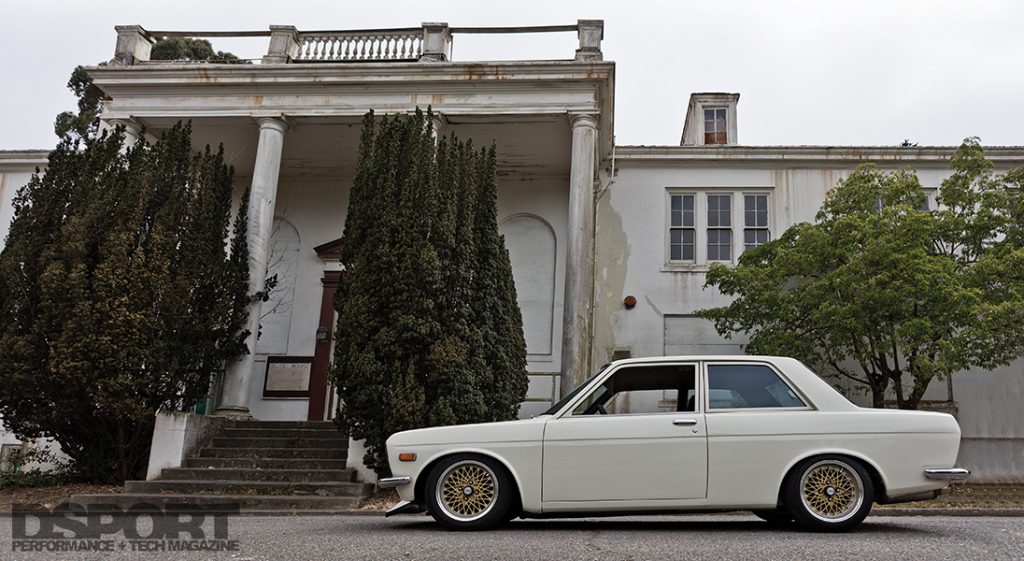 Ben Webb grew up admiring the Datsun 510. He remembered watching the 510s competing at IMSA races and thinking how cool it would be to actually own one. Unfortunately, this aspiration fell by the wayside when he got older. As a teenager, he started tinkering with VW Bugs before moving on to Hondas. Like many import enthusiasts, he fiddled with B-series engine swaps into a few of his projects. He briefly embraced the air suspension craze when he dropped a Tacoma on bags, but shortly after returned to the sport compact realm with the purchase of an SC300. Just before turbocharging the Lexus, he thought about the hassles he would ultimately face when it came time to register the car. As a longtime resident of California, one of the strictest of states with regard to emissions, Webb knew he would likely encounter quite a few hurdles whenever it was time to renew his registration. He explained, “I had some painful experiences working on cars in the past and dealing with smog laws. I came really close to putting the turbo kit on the SC300, but I changed my mind at the last moment because of all the challenges keeping it legal for street use.” 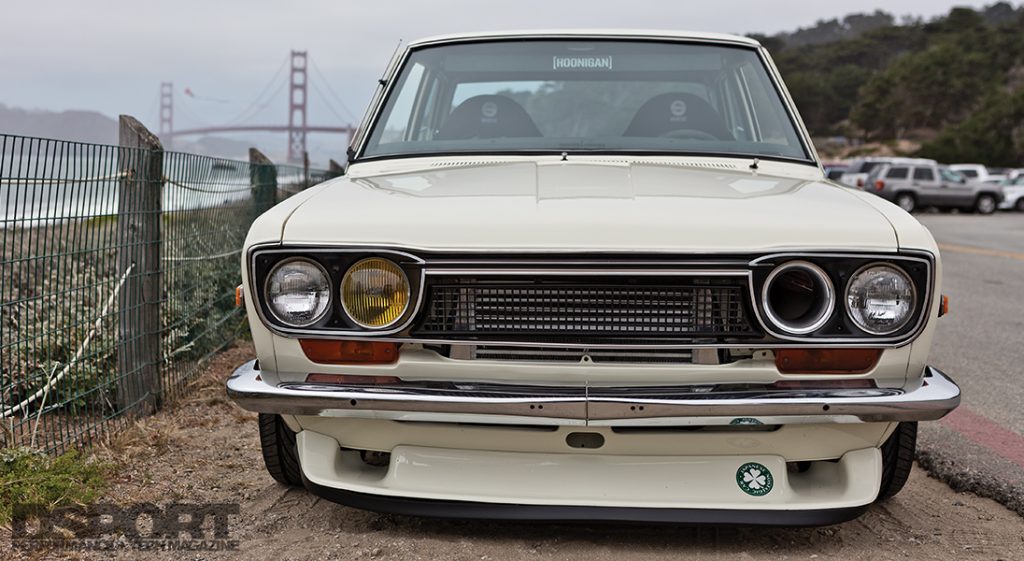 Age has its Privileges

Webb figured that the best way to avoid dealing with emissions headaches would be to seek a vehicle exempt from emissions testing. In California, it would be a vehicle manufactured prior to 1975. This was the perfect excuse to fulfill his childhood wish, as he began shopping for his old favorite, the Datsun 510. Webb eventually found and purchased this 1971 Datsun 510 coupe in 2009. Located in Southern California, it was rust free, painted primer black and benefited from an unmodified SR20 engine swap from an S13 Silvia. At this point, Webb intended to make a few refinements so that he would have a classic, smog-exempt daily driver with a touch of modern performance, reliability and safety. 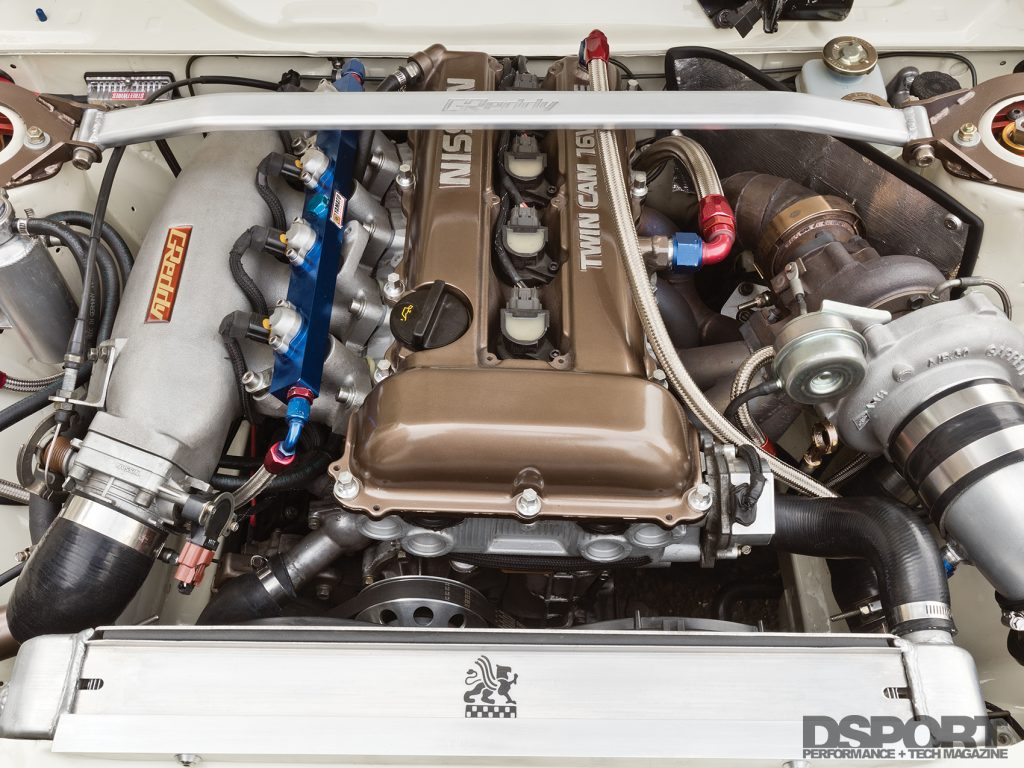 The turbocharged 510 was not without its flaws however, as Webb noticed that the swap could have been cleaner, the wiring was a rats nest and other details of the build seemed hurriedly assembled. But he anticipated that shortcomings could manifest over time and still saw the project as the raw material he could refine to his personal taste. A key factor in the direction of his build could be credited to Formula Drift driver Luke Longberger. 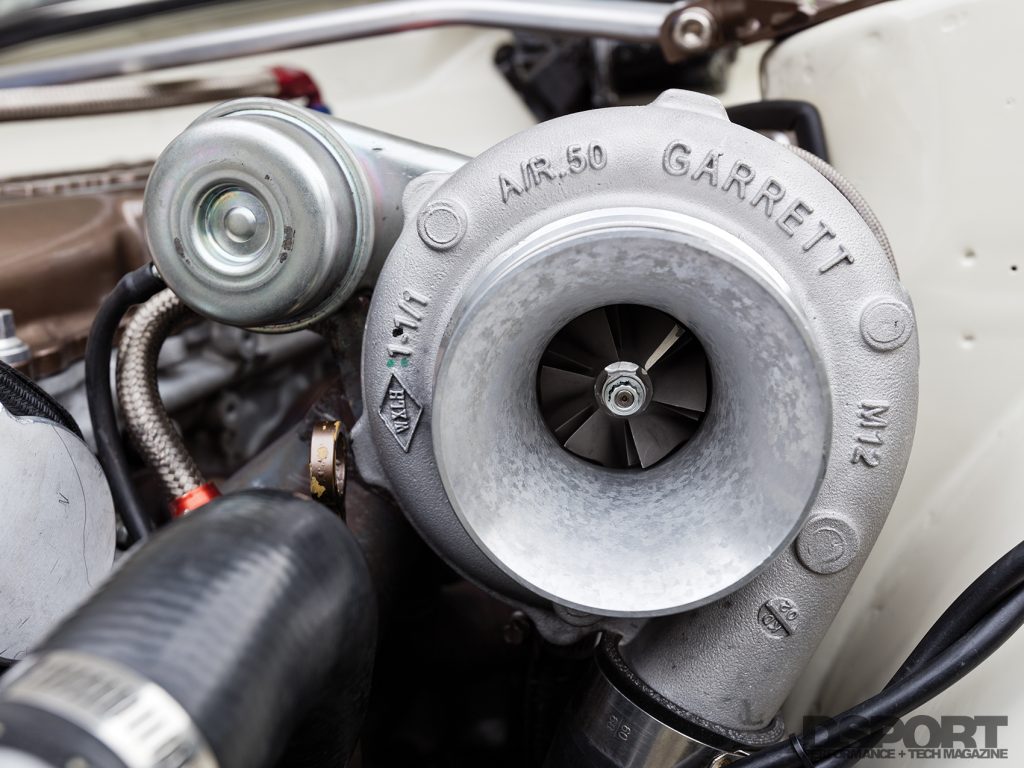 To remedy some of the 510’s issues, Webb sought assistance at a performance shop where Longberger happened to work. Longberger helped Webb iron out some issues, including an idling problem. This encounter forged a new friendship. When Longberger opened his own facility, Blu808, Webb became a regular fixture at the shop. He rewired the engine harness and redid much of the plumbing and refined the engine swap. He also learned a lot about fabrication and how professional competition builds are designed, learning what it means for a car to be “race- inspired”. This moved him to step up his efforts, taking the 510 to full restomod status.

Not a Patina Proponent

While some might consider patina and other signs of “vintage” condition to be desirable, Webb wanted to give the 510 a showroom clean appearance. He stripped the chassis inside and out before having it sprayed in Datsun #637 Eggshell White, a period correct factory hue. The belly pan also received a fresh undercoat, further protecting it from the elements. Webb implemented subtle touches to the exterior, like the incorporation of a JDM Bluebird SSS grill and Bluebird taillights. Inside the cabin, a pair of Sparco 960 seats replaced the couches up front while the door panels and the rear bench seat were reupholstered to match the Sparco themed interior. The custom CNC-cut dash panel was covered in black before a host of Auto Meter gauges were placed into the precision cut openings. As a finishing touch, a Sparco Mugello steering wheel, hub and shift knob complete the interior adornments.

Webb’s restomod project not only encompassed the exterior, it also enveloped the 510’s transplanted driveline. Progressively upgrading the stock SR20 engine with bolt-on upgrades eventually led to cylinder head upgrades in the form of HKS valve springs, retainers and Step 2 camshafts. Longberger then fabricated a tubular exhaust manifold that positioned a Garrett GT2871R turbocharger in a top-mount configuration. While a Blu808 custom downpipe and exhaust direct spent gasses through a Magnaflow muffler, a QTP electronic exhaust cutout diverts the spent gasses straight to atmosphere with a flip of a switch.

So Much for Staying Stock

Soon after, Webb jumped at the opportunity to upgrade to a built bottom end by Victory Machine, the machine shop that works on Blu808’s race engines. The engine featured Darton sleeves machined to the factory 86mm bore size. Arias 9.0-to-1 compression pistons filled the cylinders, while Eagle connecting rods join the slugs to the crankshaft. With tuner Mitch Pederson of MP Tuning calibrating the AEM engine management system to a maximum boost pressure of 21.5 psi, the 510 spun the rollers of Z Car Garage’s Dynojet Dynamometer to a peak output of 373 horsepower and 333 lb- of torque. 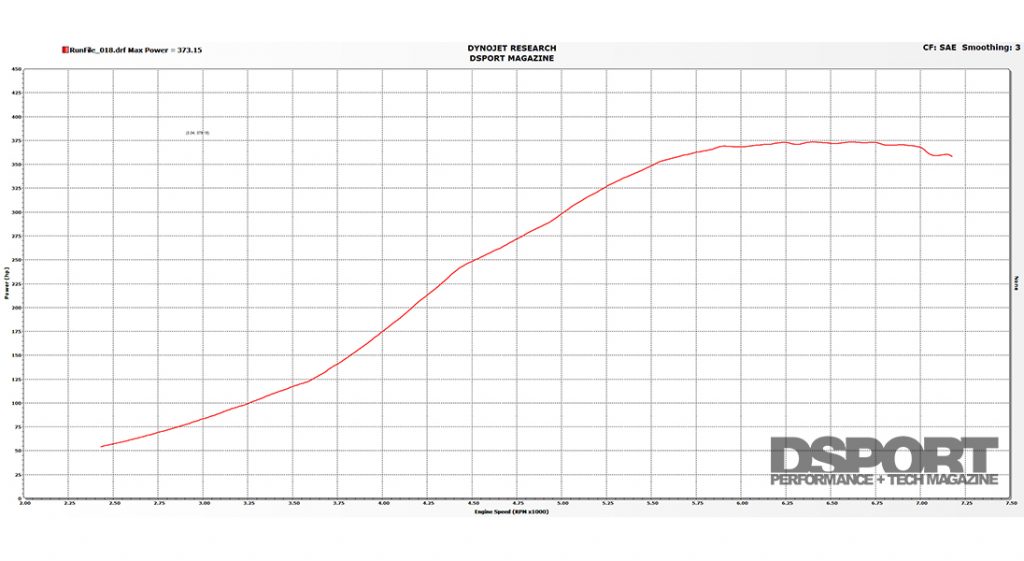 Buying and building the car that inspired him at the IMSA races of his youth made one of Webb’s dreams a reality. He shared a little about the experience, stating that “Seeing it all come together for the first time was really cool. Although it became much more involved than I had originally aspired, my 510 still became the restomod that I ultimately desired. My goal was to build a car that would bring me the greatest enjoyment while driving it, so I never lost focus on keeping the car streetable. Driving it on the weekends in the Santa Cruz mountains brings me a lot of satisfaction. It handles like a street-legal go kart. Since I bought the car, it seems like there has been a sharp increase in the number of Datsun owners getting together for regular meets, fun runs and swap meets, which I’ve really enjoyed being a part of.” 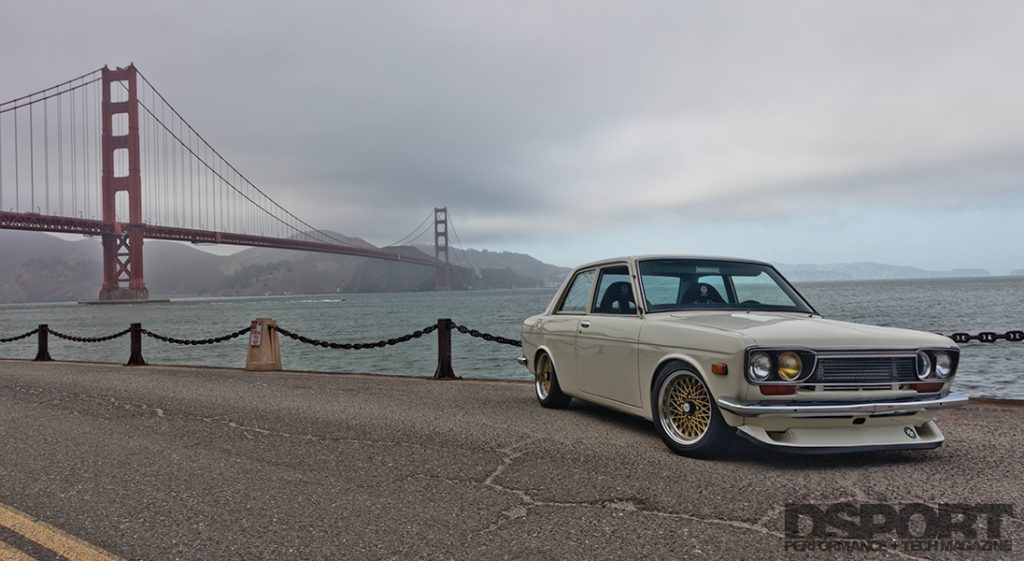