Change can be difficult. While few embrace it, change must happen in order to evolve and improve. When EVO fans discovered their beloved 4G63 would be replaced with an all-aluminum engine, outrage ensued. Many questioned why Mitsubishi did away with an iconic and nearly indestructible engine that has set records for the last two decades. The reason was simple: new, more-stringent emission requirements. Detuned to meet these limits, the 4G63 engine would max out at 250 horsepower. To remain compliant with EPA while being able to make more power, Mitsubishi developed its new 4B11T engine that debuted in its EVO X.

Text and Photos By Robert Choo 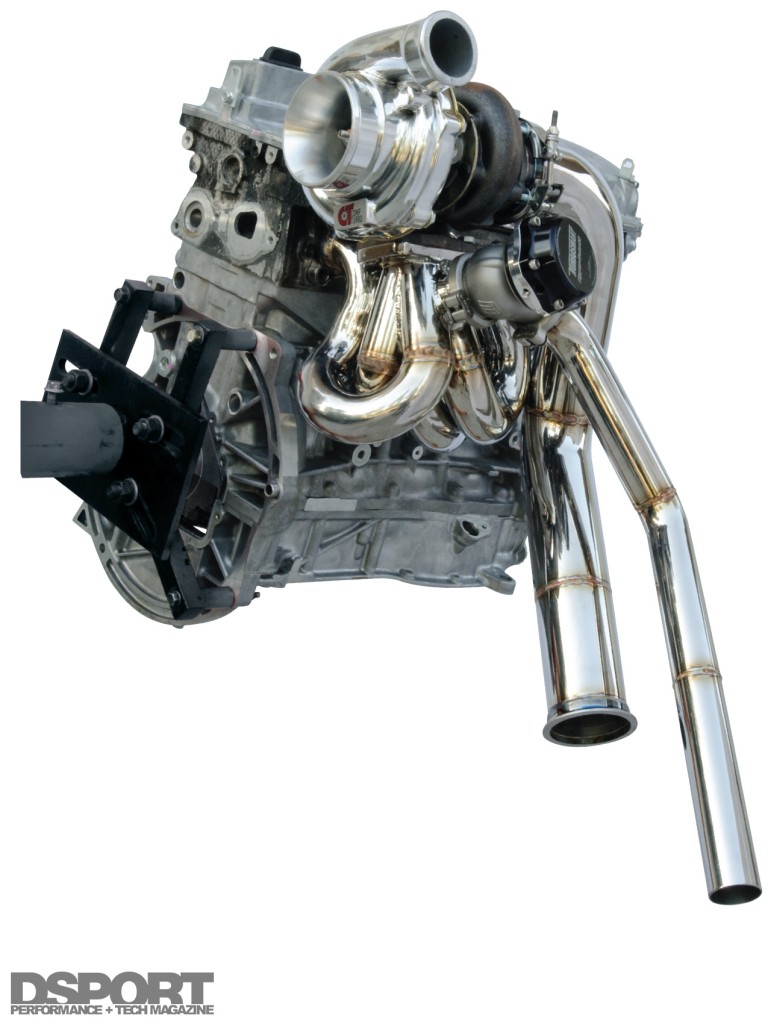 The biggest change made to the EVO heritage was the move to an all- aluminum short block. One of the obvious advantages of the aluminum bottom end is weight savings. The new EVO engine weighs 26 lbs less than the 4G63. The reduced engine weight helps improve the vehicle’s fuel economy. In addition, the superior thermal efficiency of aluminum increases heat transfer to the cooling system. As a result, cooler piston and oil temperatures improve engine durability and longevity. The cooler running engine also reduces emission production by lowering the engine’s nitrogen oxide (NOx) production. The cast-iron 4G63 engine, seen in previous EVO platforms, has proven to withstand high-horsepower production. Although cast-iron offers a substantial benefit in strength over aluminum, Mitsubishi took the necessary steps to ensure the durability of the 4B11T bottom end. First off, the bottom end features a four-bolt main cap to ensure the crankshaft is secured in place. The block deck is semi-closed to resist cylinder wall distortion at increased boost levels. Furthermore, a two-piece oil pan design increases block rigidity and prevents the block from twisting and flexing at high-RPM operation.

In stock trim the 4B11T engine generates substantially better low- end and mid-range power than the 4G63 engine. The 4B11 also realizes a 13.4 wheel horsepower advantage in peak power.

With light tuning (intake, exhaust, downpipe, camshaft, intercooler upgrade and reflash), a difference of only 3.6 peak horsepower can be seen between the two engines, but notice the superior area under the power curve for the 4B11. 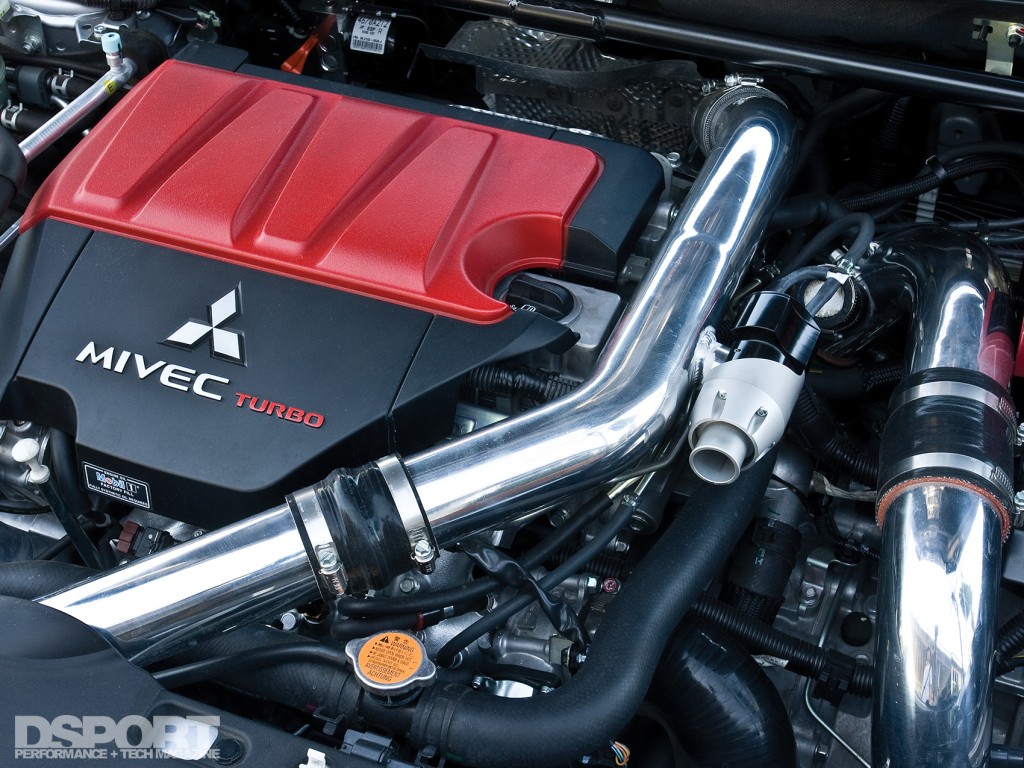 The D’GARAGE EVO X has already generated over 340 horsepower on a Mustang AWD dynamometer with simple bolt-on modifications (intake, exhaust downpipe, test pipe, front-mount intercooler upgrade and a reflash). Future modifications include higher lift and longer duration camshafts as well as a larger turbocharger and a high-octane retune.

The EVO III-generation of the 4G63 cylinder head had about a 20-percent advantage in intake flow over the 4B11, in factory form. On the exhaust side, the 4B11 flowed close to the 4G63 at valve lifts above .300”. All measurements were taken at 50 inHg. However, it should be noted that the 4B11 uses smaller higher-velocity ports designed to fill the cylinder faster at lower engine speeds. This design change and the use of MIVEC on both cams allows the 4B11 to have superior low-end and mid-range power production.

Two is Better Than One

Up top, the cylinder head has also been improved with the Mitsubishi Innovative Valve-timing Electronic Control system (MIVEC) used on both the intake and exhaust camshafts (in the EVO IX, MIVEC was only used on intake cam). The dual MIVEC control allows for a wider range of duration and valve overlap to promote turbo spool up and overall horsepower production. The direct-valve actuation design eliminates the hydraulic lifter and rocker arms that were used on the 4G63 head. The bucket- over-valve design decreases the chances for failure at high-RPM operation. The intake and exhaust port location has been swapped from the previous generation’s orientation, reducing the length of the exhaust plumbing and reducing oil temperature heat saturation that was caused by the downpipe being routed across the bottom of the 4G63 oil pan. 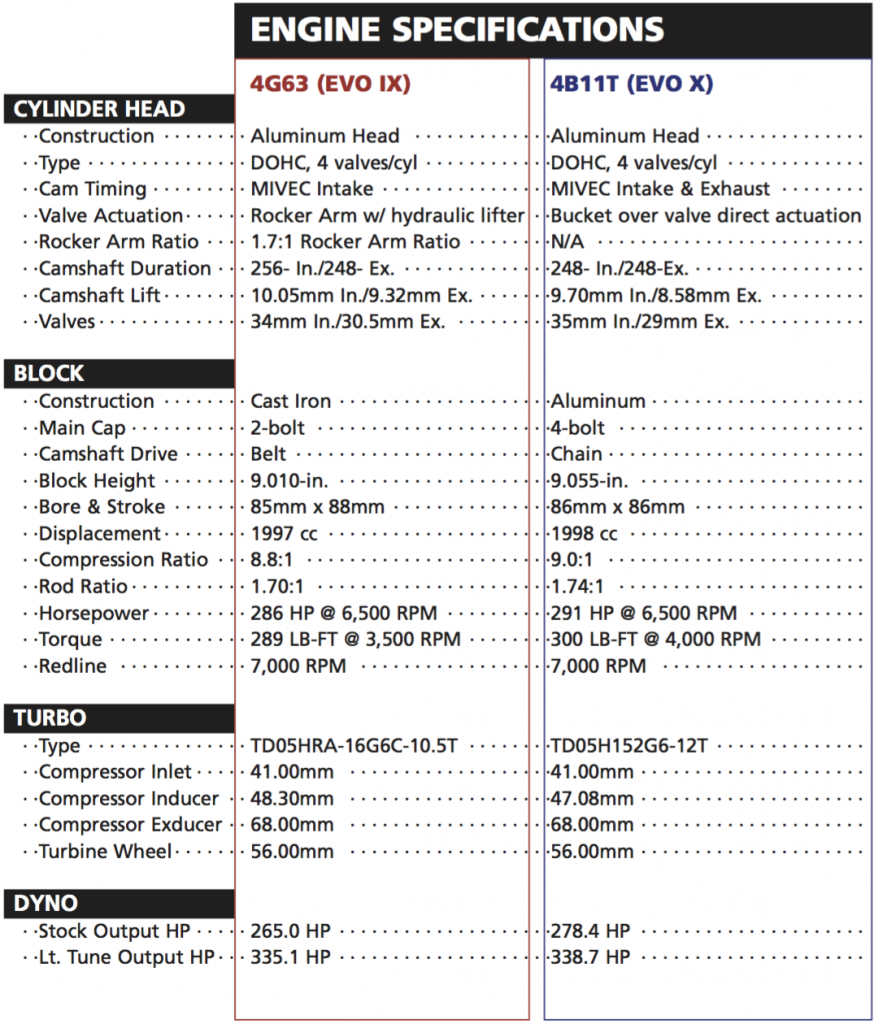 Over the years, hundreds of examples of stock block 4G63 engines have generated over 600 horsepower to the wheels, while fully-built examples have exceeded 1,200 horsepower. Barely entering its second year on the market, stock block 4B11T engines have already recorded 550-600 wheel horsepower dyno figures. However, due to its relatively new introduction there are few fully-built examples of the 4B11T engine to compare to. Only time will tell if the 4B11 resets the 4G63’s power records.

What do you think about the 4B11T engine?

We’ve found the 4B11T engine to be a much better platform than we had originally anticipated. Leave it to Mitsubishi to build an engine that can handle four times what they engineered it to make. The semi open-deck design that everyone worried about has proven to be much stronger than anyone had guessed. Buschur Racing is now offering Stage 3 engines with stock sleeves and have found no reason to upgrade the factory cylinders. The power output of the engine, part-for-part has proven to be higher than the 4G63 to date.”

“We have found the 4B11T cylinder head to be one of the best flowing production cylinder heads to date. Structurally the cylinder head is also stiffer than the previous 4G63’s cylinder head which should aid in cylinder sealing. During the development of the Cosworth H-11 head studs for the 4B11T engine, we discovered the head also crushes significantly less during the torque process. Less crush means that there is more clamping force at the head gasket. As for the block, its merits remain to be seen. We have been testing multiple development engines on the engine dyno. Our initial analysis does not show that the aluminum block should be a problem for big horsepower. We have already cut up cylinder blocks to investigate its strength.” 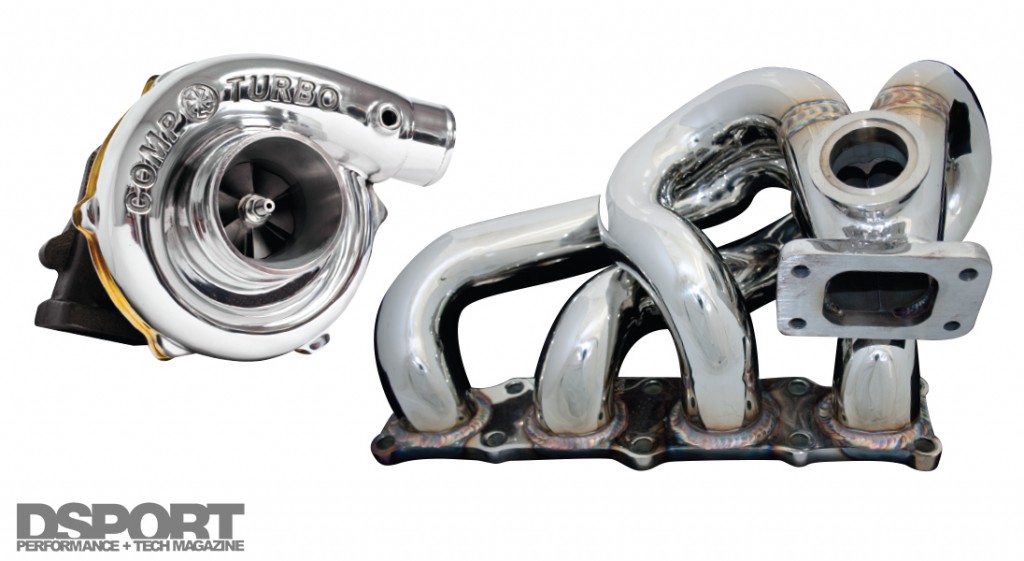 The Peak Boost equal-length manifold features the company’s “Bling” option applied to the stainless steel finish. The mirror polish makes the manifold look like a work of art and almost too good to bolt to the engine. 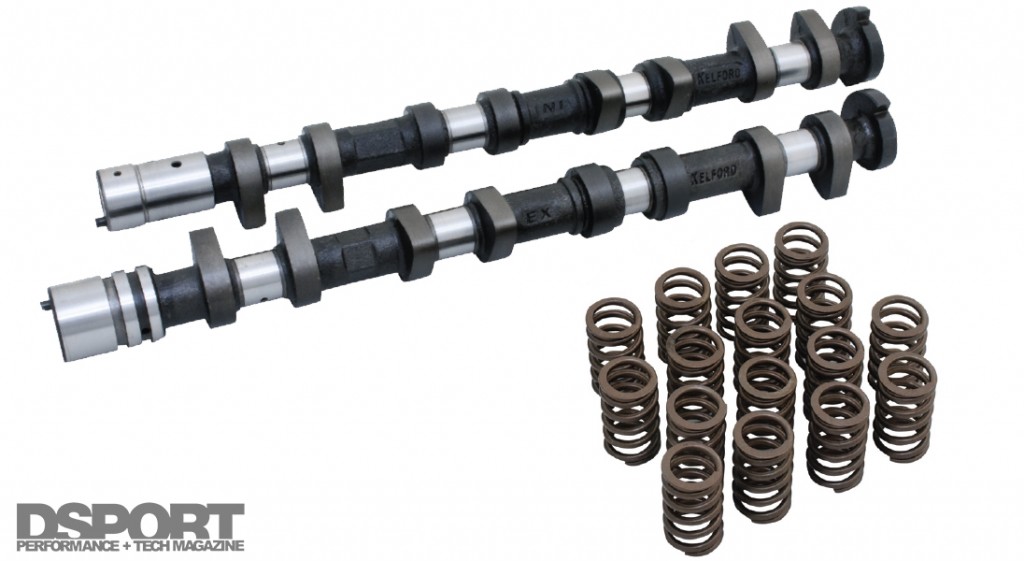 The Kelford 214-B camshafts feature increased valve lift and duration ideal for vehicles equipped with a turbo upgrade. The higher lift and longer duration should help promote turbo spool up and increase overall horsepower production. 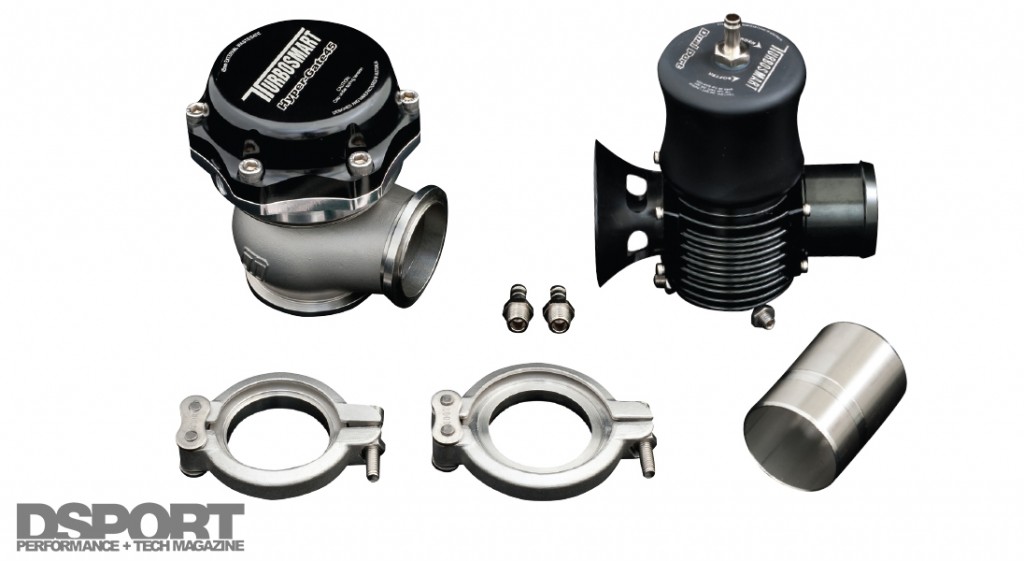 On our DSPORT EVO X, a Turbosmart HyperGate45 will be in charge of controlling boost pressure. The compact design of the HyperGate45 makes it an ideal wastegate for engine compartments with limited space. A Turbosmart Dual Port blow-off valve will handle pressure relief when the throttle closes under boost.
On June 2, 2016