“Blinging” show cars usually have every dress-up component under the sun but offer the same amount of performance as a bone-stock vehicle. On the flip side, cars built with a horsepower focus can pull away from an opponent at a stop-light encounter, but won’t have the eye-catching looks that gain admirers. Striking a balance between looks and performance has become more and more common, as enthusiasts invest their time and money to blend performance with presentation. Jorge Lopez used to own a highly-modified 350Z that hardly rarely earned a second glance despite its ability to pull away from most contenders. When the time came to relinquish the Z keys to a new owner, Jorge started shopping for a new ride. He wanted his next project car to have the best of both worlds, to be recognized for both performance and presentation. Since he was already familiar with the VQ engine family, selecting the Infiniti G35 Coupe was a simple transition. By Richard Fong // Photos by Michael Ferrara 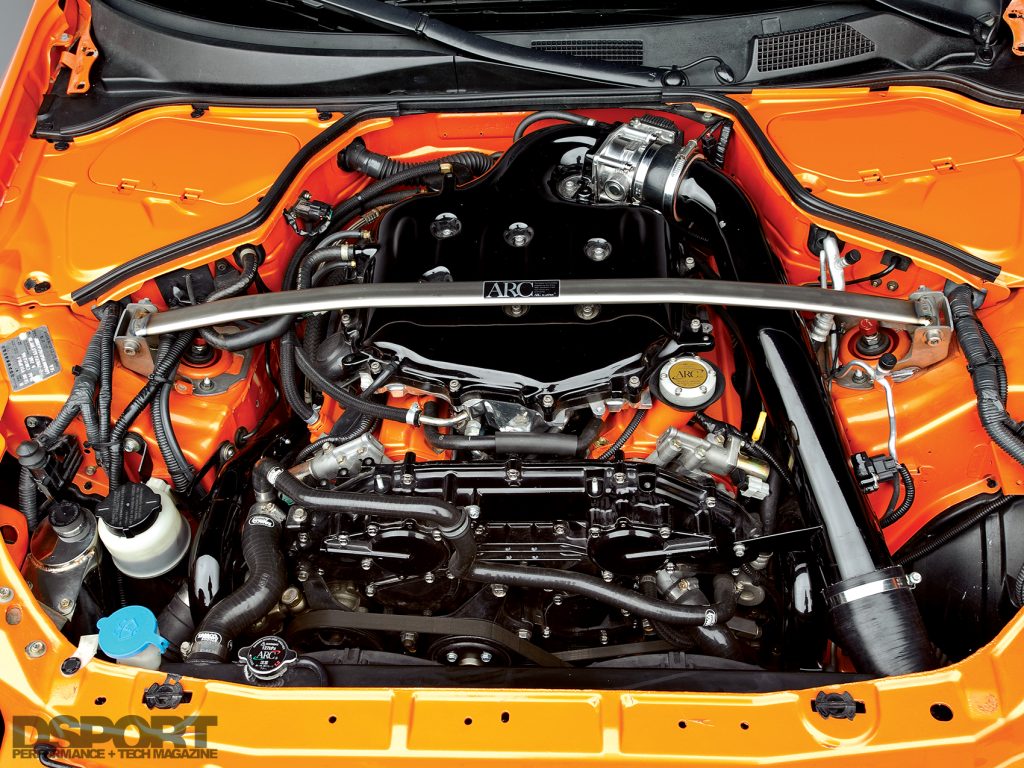 Knowing the potential of the VQ, Jorge set a target of 700 wheel horsepower on pump gas as his build objective. But in order to reach this target, the engine would need an overhaul and reinforcement to hit the numbers and still run reliably. Once removed from the engine bay, the VQ was stripped down and resleeved with a set of Darton M.I.D. ductile iron sleeves. The sleeved were bored and honed to 100mm before being filled with a set of Wiseco pistons. These pistons connect to the GTM Motorsports 87mm stroker crankshaft by way of GTM billet connecting rods. The crankshaft journals received reinforcement from GTM billet steel main caps and billet steel girdle to ensure durability and reliability. The decision to use the shorter-stroke crankshaft instead of the 90mm option stemmed from the desire to have a higher redline. This combination of parts results in a total displacement of 4,100cc. Up top, the cylinder heads were ported and polished for improved flow to best benefit from the increased displacement. Ferrea +1mm oversized valves, springs and titanium retainers were installed in the heads. This new valvetrain not only permits an increased volume of airflow into and out of the engine, its stiffer springs and lightweight retainers allow for reliable operation at high RPM. These improvements also facilitate the use of high-lift long-duration GTM Stage-3 camshafts that optimize the airflow in and out of the cylinders. 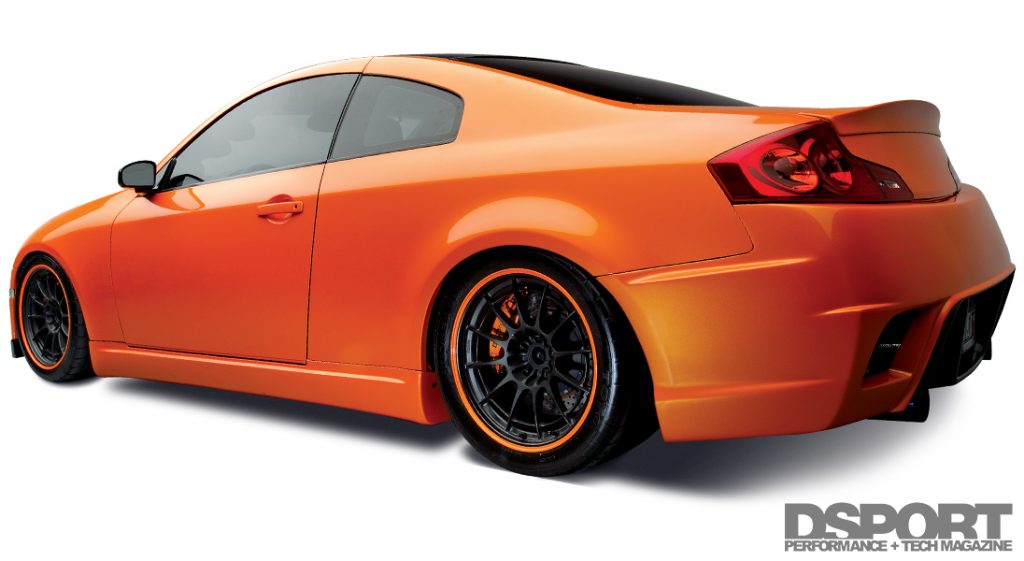 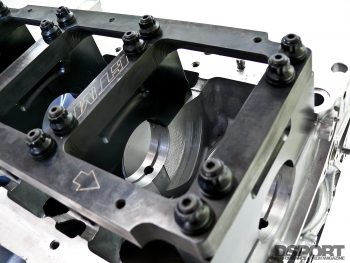 In the case of cast aluminum blocks, the block can flex under extreme load. Since the main caps are independent of one another, there is no reinforcement of the crankshaft journals. To unite the main caps and stiffen the bottom of the block to reduce flex, a block girdle can prove to be an effective solution. This unifications helps to distribute the stress of each power stroke across all of the journals for durability and reliability.

With the longblock ready to rock, Jorge selected APS Performance’s Extreme Twin-Turbo System to take advantage of the VQ’s displacement. The APS system uses a pair of APS- spec Garrett turbochargers. The increased displacement of the new 4.1-liter engine combined with the quick spool up traits of the turbochargers combine for a very streetable torque curve with enough top end to reach the horsepower goals of the build. As the “G” would have to serve as a daily driver, tuning on pump gas was a requirement. GTM Motorsports’ Stage-5 fuel system upgrade with fuel return supplies a six-pack of HKS 1,000 cc/min injectors to ensure ample fuel delivery. To chemically intercool and effectively raise the octane of the fuel entering the combustion chambers, an Aquamist HFS-5 water/methanol injection system was plumbed into the intake tract. Orchestration of the fuel and ignition timing events was left to an HKS V-PRO. With GTM’s Sam Zawahra in command of the laptop, the boost was dialed in at 17 psi. The G spun the rollers of the Dynojet to the tune of 696 horsepower and 617 lb-ft torque, close enough to the 700whp mark. 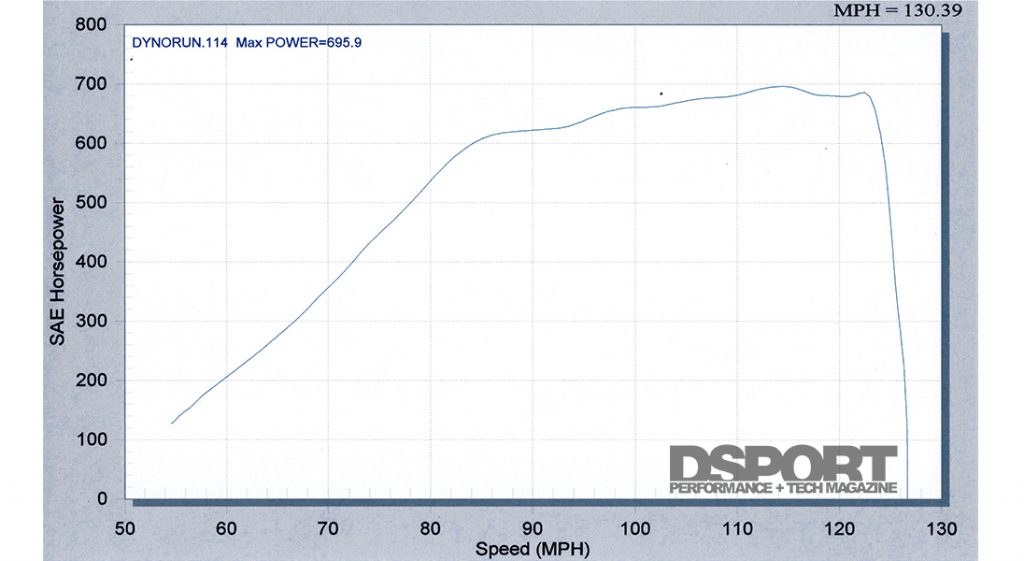 For the show side of the G, subtle exterior enhancements include a Top Secret front bumper, Ings+1 side skirts, Ken Style rear bumper and a Gialla trunk lip spoiler, all sprayed in a bright Lamborghini orange hue. Black Enkei NT03 wheels wrapped with Toyo tires flaunt an orange lip, while StopTech brake calipers powder coated to match the body peak out between the spokes. Although the orange skin shouts for attention, the body lines are tastefully low-key.

The G35 coupe finally has the looks and the power that Jorge envisioned when he let go of his Z. He comments, “Most people devote their resources all into show or all into performance. I feel that my car is unique since it has everything that a show car would have but with the power of a performance car.” He confesses that the downtime was a killer, as he got impatient waiting for the build to be completed. But the reward was driving the car home from the shop. With a custom interior and audio system on the horizon, Jorge is getting as much seat time as he can before his car goes under the blade once again.