“Don’t go too far” is one of the first rules that any child hears. Of course, no child ever listens. Instead, they often have to learn that and every other lesson for themselves. In the case of Dana Westover of Las Vegas, Nevada, his 7-second race-only Supra is the epitome of taking things too far. This 1,300-horsepower, two-speed automatic, drag-only Supra only sees action when its slugging it out on the dragstrip. Once a killer streetcar, that Supra went too far to remain streetable. Text and Photos by Michael Ferrara 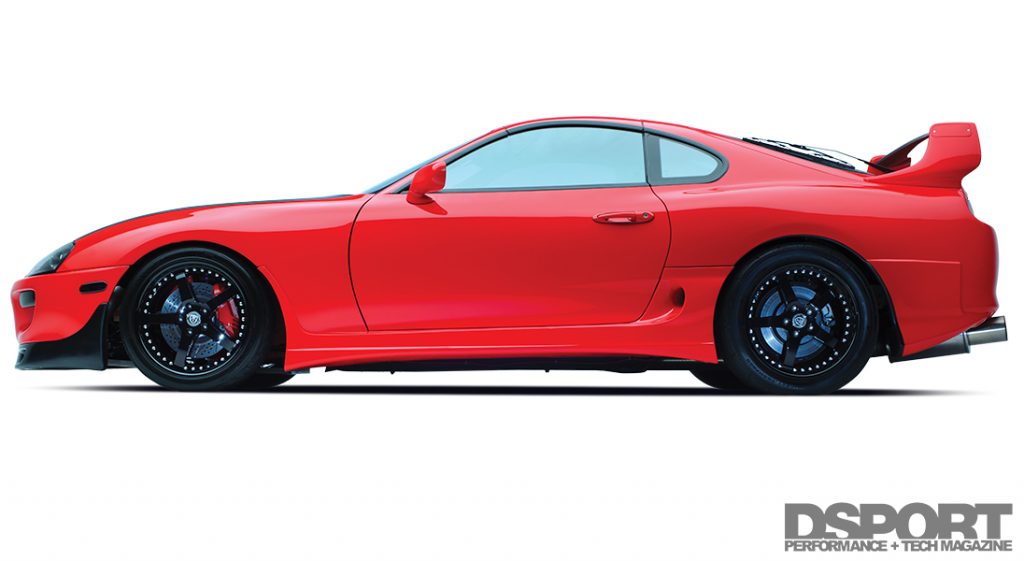 When Dana came across this 1995 Supra, his chance to build a streetable solution was at hand. Of course, a stock engine wasn’t going to get the blood flowing. A built engine, upgraded turbocharger and the parts to match would all be in order. For peak reliability, billet-steel main caps were fitted to the block. This upgrade required the line boring and line honing of the block to ensure that the main saddles were perfectly straight for the crankshaft. The block’s cylinders were bored 1mm over and honed for the recommended wall clearance before being fitted with forged-aluminum 9.3-to-1 CP Pistons. Carrillo forged steel rods connect these pistons to the factory 86mm crankshaft. These simple upgrades allow for extreme reliability. 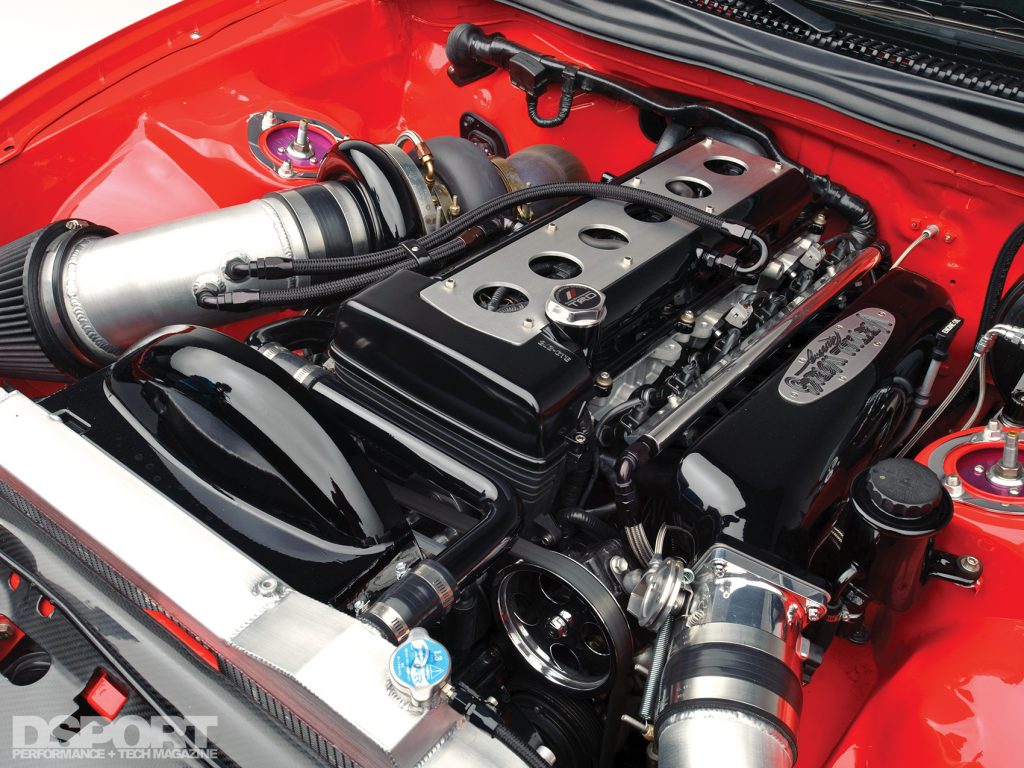 Headed in the Right Direction

To improve volumetric efficiency, Virtual Works Racing (VWR) treated the cylinder head to a “race port” service before installing the HKS 280-degree camshafts. The cylinder head and cam upgrades are optimized thanks to the VWR intake manifold. While many mistakenly believe that cylinder-head work and high-performance camshafts are not necessary on a boosted application, the reality is that they allow more power to be made at lower boost levels. Lower boost levels reduce the demand on ignition and fuel systems while reducing the likelihood of detonation. Bottom line, cams and head work on boosted applications are well worth the money. 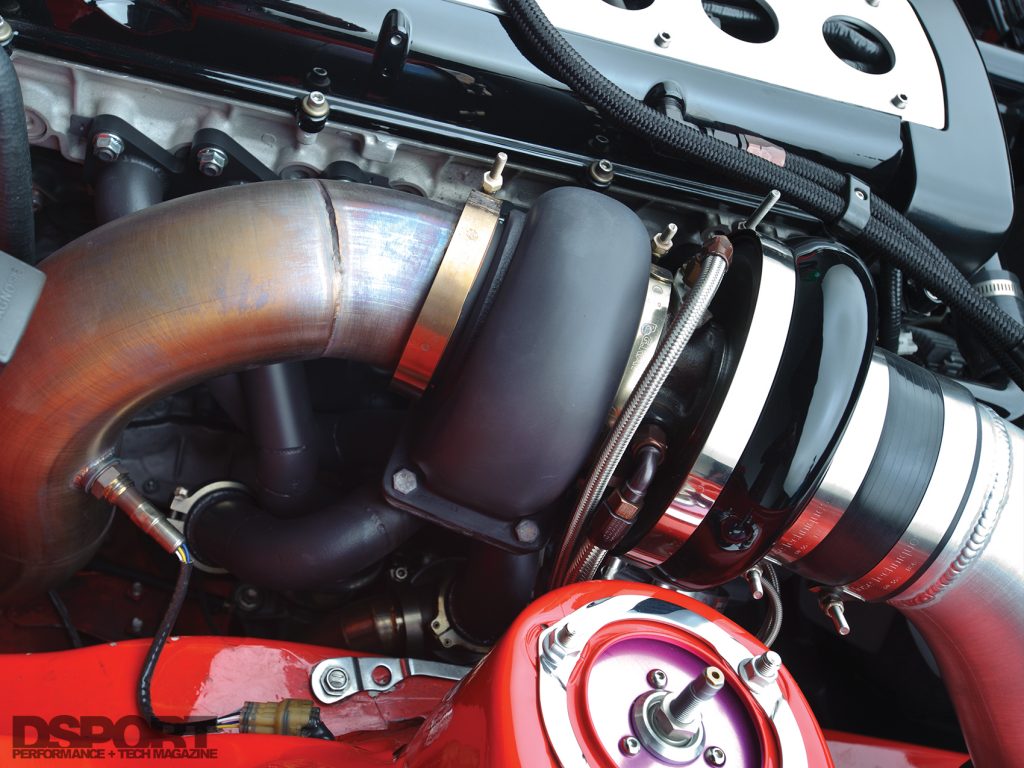 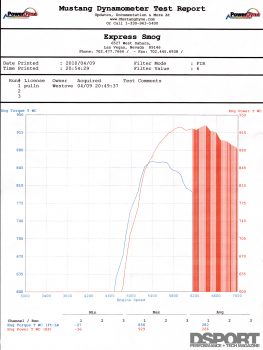 While a number of Supra owners fixate on horsepower numbers and earn the moniker of “Dyno Queen,” Dana looked for a turbocharger solution that would provide serious response and power output. A VWR equal- length exhaust manifold is home to a Precision Turbo & Engine (PTE) GT42-72 turbocharger. This turbocharger starts life with a 74mm inducer. To meet class rules for certain sanctioning bodies, PTE machines the wheel to a 72mm inducer. The end result is a 50-trim compressor featuring the new GTX aerodynamics from Garrett. A drop of the throttle rockets boost response while delivering over 600 ft-pounds of torque by 4,600 RPM and by 5,400 RPM torque checks in at nearly 850 ft-pounds at the wheels. Over 900 wheel horsepower carries from 5,600 RPM through 6,600 RPM. Peak power checked in at 929 WHP at 6,400 RPM; for comparison, a stock Supra makes 270 WHP at 5,900 RPM on this same dyno. Peak power has been more than tripled. This power isn’t realized on race gas, however. It’s realized on fresh-from-the-pump E85. 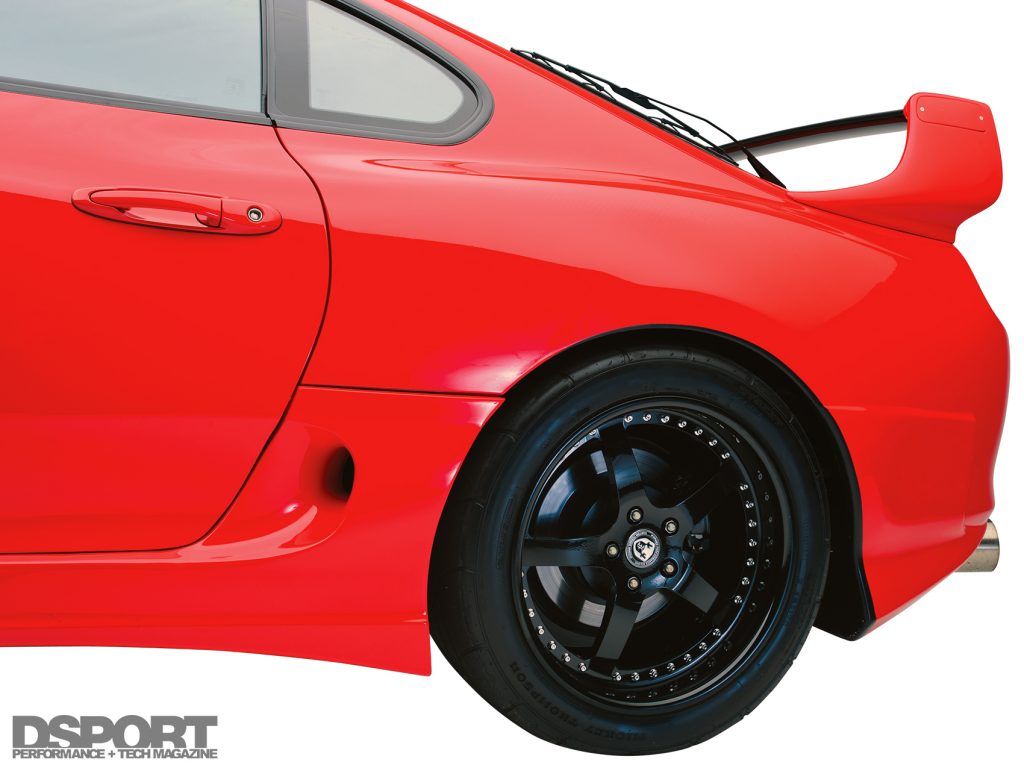 After more than tripling the original engine output, the factory driveline needed much attention. While the factory Getrag V160 6-speed transmission handles amazing amounts of power, the same can’t be said for the stock clutch or driveshaft. A Tilton Engineering triple-plate clutch solved the clutch challenge while a lightweight VWR 4-inch aluminum driveshaft keeps its shape while transferring the power to the TRD limited-slip differential. 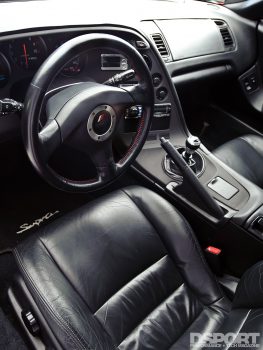 A 6-point cage with removable side bars keeps the driver safe without hampering the ingress and egress from the vehicle. A TRD tachometer and HKS knock-amp display are the only improvements made to the control surfaces of the cabin. On the outside, a Wings West lip spoiler, TRD vented hood and TRD wing do just enough to set the Red Supra apart from the crowd.

According to Dana, “This build actually went smoothly. What sets this Supra apart from others is the detail in the engine bay. Admittedly, I got carried away with the refinement, but it was fun.” On its first visit to the strip, the Supra bolted on a set of slicks and managed a 10.3 at 142 MPH. After dialing-in the suspension setup, the Supra should soon see nines. “I’m really happy with the Supra and I currently don’t have any plans to change it. If I did it all over again, I’d probably pick a different color and go with the 3.4-liter stroker kit. But that would be it.” Sounds like Dana learned his lesson. 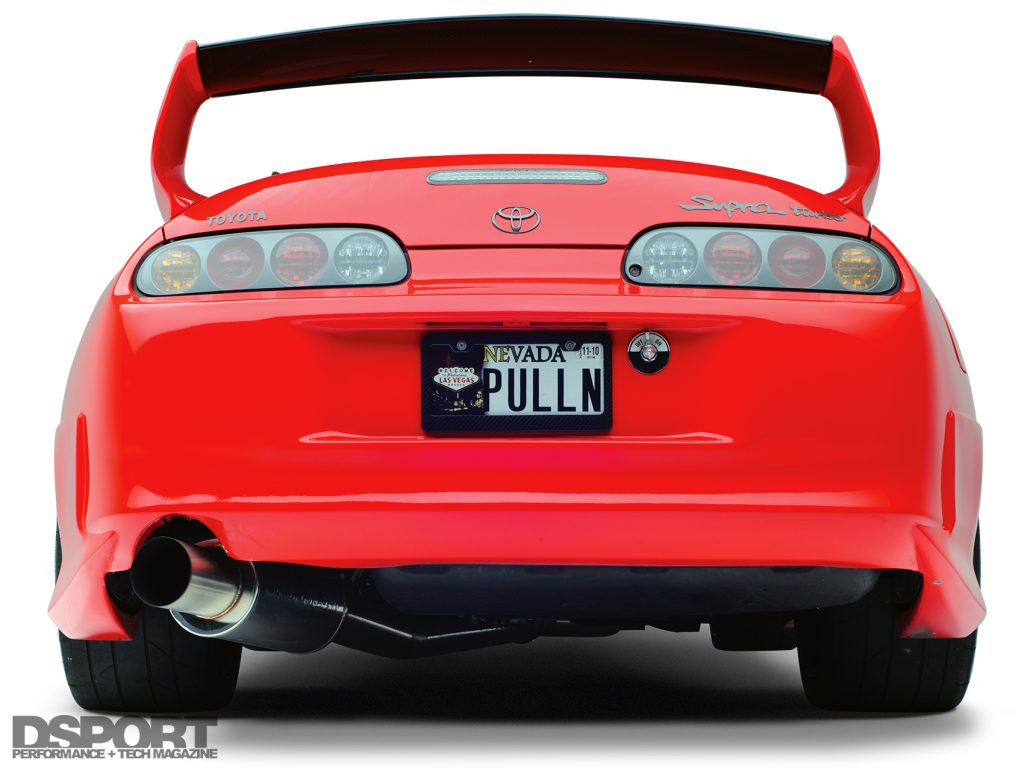