The racetrack is the common factor shared by practically all motorsports and serves as the proving grounds for all things high performance. Track testing also functions as the laboratory for performance parts development. Participation and involvement unite the manufacturers, tuners and consumers in our industry and no one knows this better than David Norton of S.P.E.C. Clutches. SPEC Clutches was born of a need for attainable driveline performance products. Norton and much of his staff at SPEC Clutches not only develop and manufacture clutch products, they also track the products they produce. When Norton purchased this 1995 Nissan 240SX in 2002, drag racing was the motorsport of choice among import enthusiasts. He intended to build the S14 240SX chassis as a street sleeper that could drive to the track, give the local domestic guys a run for their money and then drive home. However, the build focus changed with the shift in popularity of drifting, road racing and time attack in America. The versatility of the Nissan S-chassis made it possible to make a course correction and refocus mid-build. Text and Photos by Richard Fong 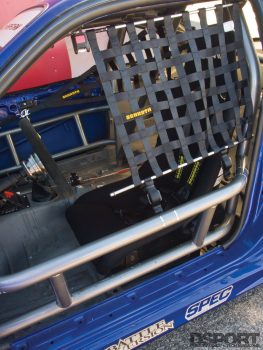 Although the chassis had already been prepared for the strip, it was back to the design board to make the setup more reliable and better prepped for the circuit. Once the chassis had been stripped and the doors gutted, the cabin was reinforced with a Kirk Racing cage better suited for door-to-door competition. The cage not only stiffened the chassis and offered protection for the driver in case of a rollover, it also featured door bars that protrude into the hollowed doors to ensure side impact protection. A Recaro Pole Position bucket seat with Schroth 6-point racing harnesses secures the driver behind the Sparco steering wheel. Information is critical, so a STACK display panel and A’PEXi gauges mounted to a carbon-fiber panel monitor engine vitals and relay important vehicle data. For weight savings and adjusted ballast, a Braille Battery lithium-ion battery with a carbon-fiber shell mounts behind the now- absent passenger seat. 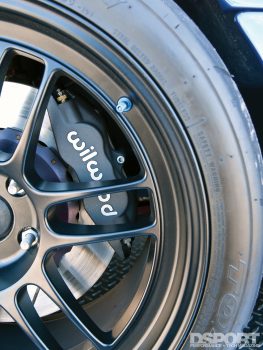 Since the S14 was repurposed for cornering in addition to acceleration, refinements to suspension and handling were in order. JIC Magic FLT-A2 coil-over dampers suspend the chassis by way of a plethora of Battle Version suspension links and arms. This combination permits adjustment to spring preload, dampening and suspension alignment. Behind the Toyo R888-wrapped Enkei RPF-1 wheels, a pair of Wilwood Superlite calipers grab two-piece rotors up front, while two-piston calipers mounted to 300ZX turbo uprights apply friction to slow the rear wheels.

The USDM KA24DE engine that originally equipped this S14 was discarded in favor of a factory-turbocharged JDM sibling, a Red Top SR20DET from an S13 chassis. The aluminum block received a set of Indy ductile-iron sleeves installed by Sunbelt Racing Engines. Forged aluminum CP Pistons filled the larger 87mm bores, while Carrillo forged-steel rods made the connection to the factory crankshaft. This combination yielded a new displacement of 2,045cc. 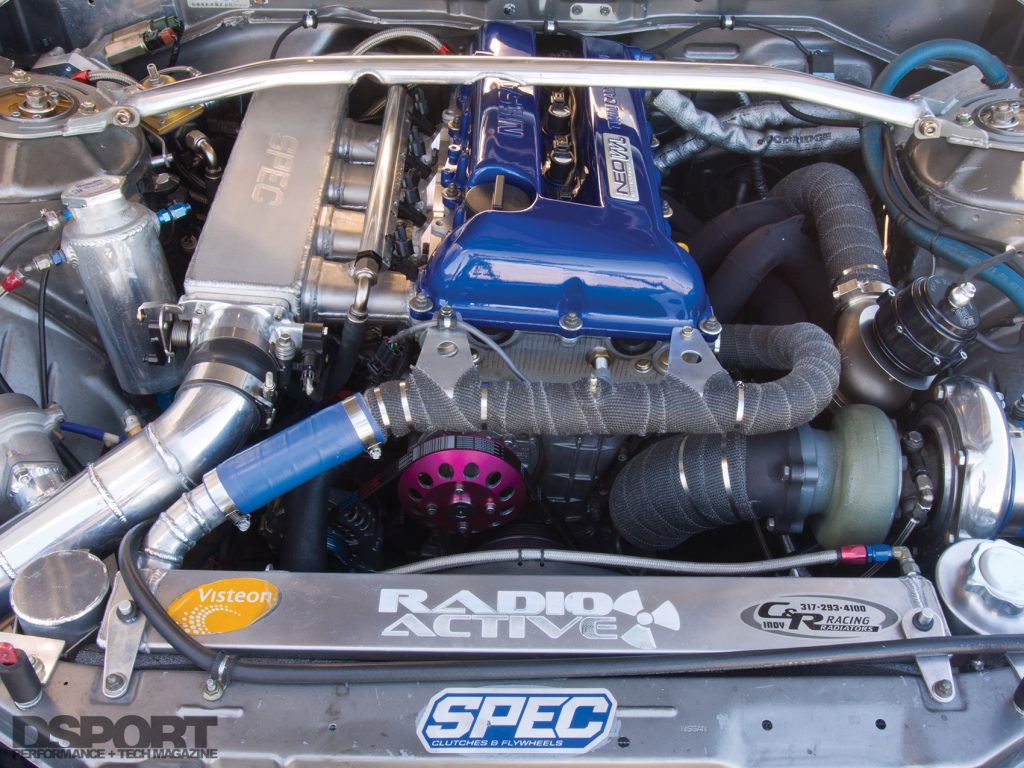 The original S13 SR20DET high-port cylinder head generally outflows the low- port, variable intake camshaft-equipped SR20DET from a JDM S14. However, neither can compare to a higher-flowing cylinder head with variable-valve timing and lift control on both the intake and exhaust camshafts. The Nissan SR20VE head offers increased airflow in addition to optimized valve timing thanks to dual variable camshafts. With the SR20DET high-port head removed, the SR20VE head installed in its place was equipped with a complete Supertech valvetrain lifted with the stock VVL camshafts. An A’PEXi MLS head gasket provides the seal between the head and block, while ARP head and main studs keep the long-block assembly together. Norton remarks, “The VVL install was not terribly difficult. We mounted a magnetic pickup on the timing cover and a crank trigger to the cam sprocket. The biggest deal was syncing the signal to the variable cam timing function in the AEM EMS. But it is nothing a good tuner can’t knock out.” 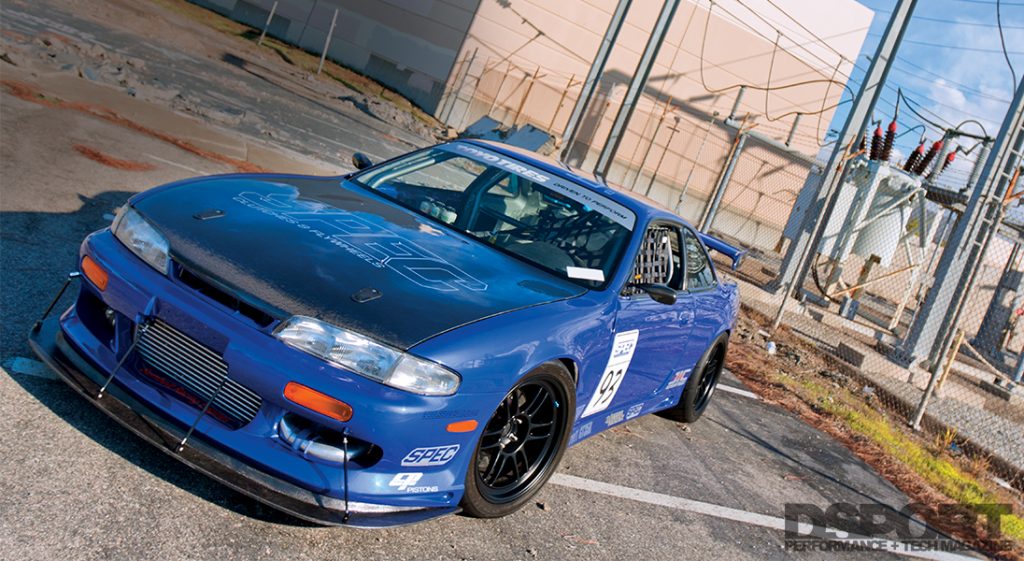 VVL – Variable Cams, In and Out 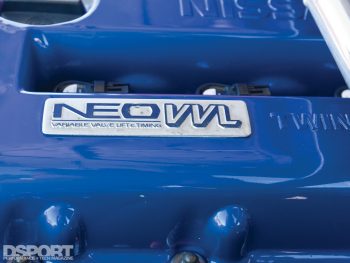 Sourced from an Infiniti G20 and the JDM Nissan Primera, the SR20VE NEO VVL (Nissan Ecology Oriented Variable Valve Lift and Timing) was originally a naturally-aspirated application. According to David, “The VVL head totally changed the car. With the original red top head the power/boost came in like a centrifugal blower setup, and maybe a bit more responsive than the VVL below 4,000 RPM. With the VVL head, it’s like a nitrous shot from 4,200 to 9,000 RPM. The VVL obviously makes power longer. The extra RPM is a huge benefit with the car’s steep gearing. This head is very efficient, as it makes 95 more horsepower and 75 more lb-ft torque than the redtop with the same turbo and boost.”

Producing significantly greater horsepower figures from a forced- induction-equipped engine entails upgrading the components. A Turbo Specialties custom 321 stainless-steel manifold positions a Turbo Specialties GT3582R turbocharger forward of the factory location and in place of the belt- driven power steering pump. The long, equal-length runners ensure good velocity, spool up and peak power. The manifold features an HPC thermal coating to keep the heat within the pipe. This helps to harness the energy of the high-enthalpy gasses to spin the turbine. A custom downpipe and exhaust system routes the gasses leaving the turbine out to the atmosphere. Custom piping joins the compressor outlet to the GReddy intercooler. From the intercooler, the compressed air charge is distributed to the combustion chambers by way of a custom SPEC intake manifold. With an AEM EMS managing engine functions, the true power-producing capacity of the SR20VE hybrid engine could be attained. With the chassis strapped to T1 Race Development’s Dynojet 248C dynamometer, the 240SX produced 619 horsepower and 449 lb-ft torque at 24 psi boost pressure. 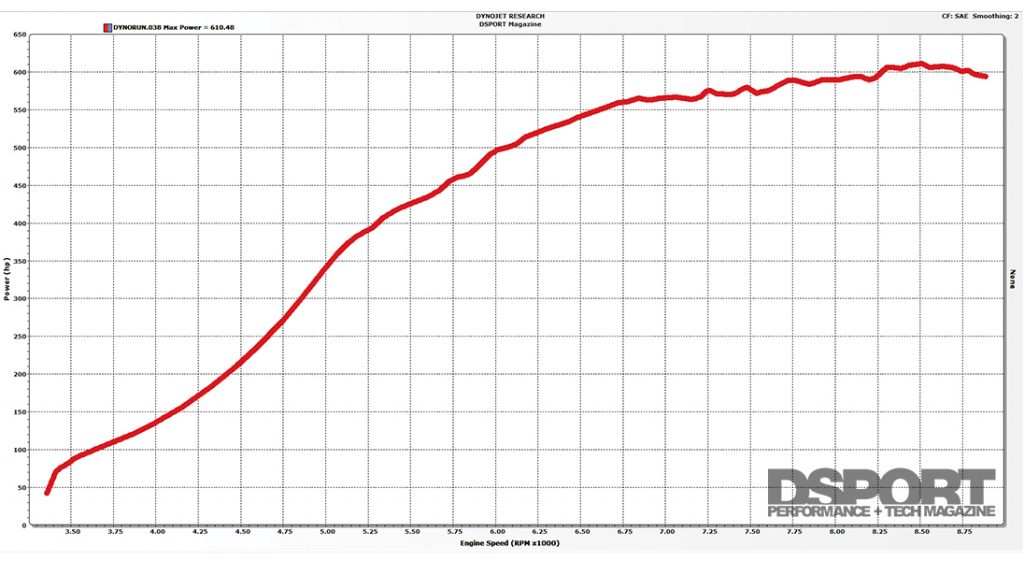 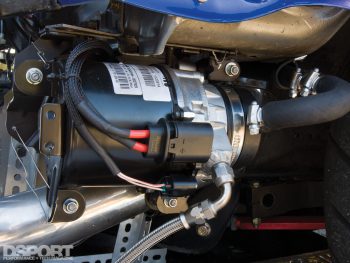 As planned, the 240SX made many trips to the circuit and even competed in time attack competition. Before the VE head conversion, the stock red top cylinder head threw a rocker arm and suffered a sensor malfunction at separate time attack events. It captured a podium spot in 2008 while battling cooling issues. Norton states, “The car has not seen but a handful of competition events but a good number of track days. With the SR20VE cylinder head, it is just now worked out to the point that we can be confident in its reliability. If I had to do it again, I would not hesitate. The finished project was well worth the work. We now have a car that is fast and looks good.” Future plans include a carbon-fiber splitter and a Kognition Design rear wing for more downforce. Expect to see this 240SX at more SCCA and NASA events soon. David Norton would like to thank Enjuku Racing, Nippon Power, CAREX, Turn 14, Titan Motorsports, and George Klass from Accufab for their contributions to this project. He would also like to recognize Barry Trivette at Robinson Racing for the chassis and suspension setup, Jon at JIC Magic for the suspension components, Reed Partridge from Turbo Specialties for the turbo manifold and exhaust, and SPEC Clutch’s event coordinator Danny Smith for keeping the 240SX maintained and tuned. 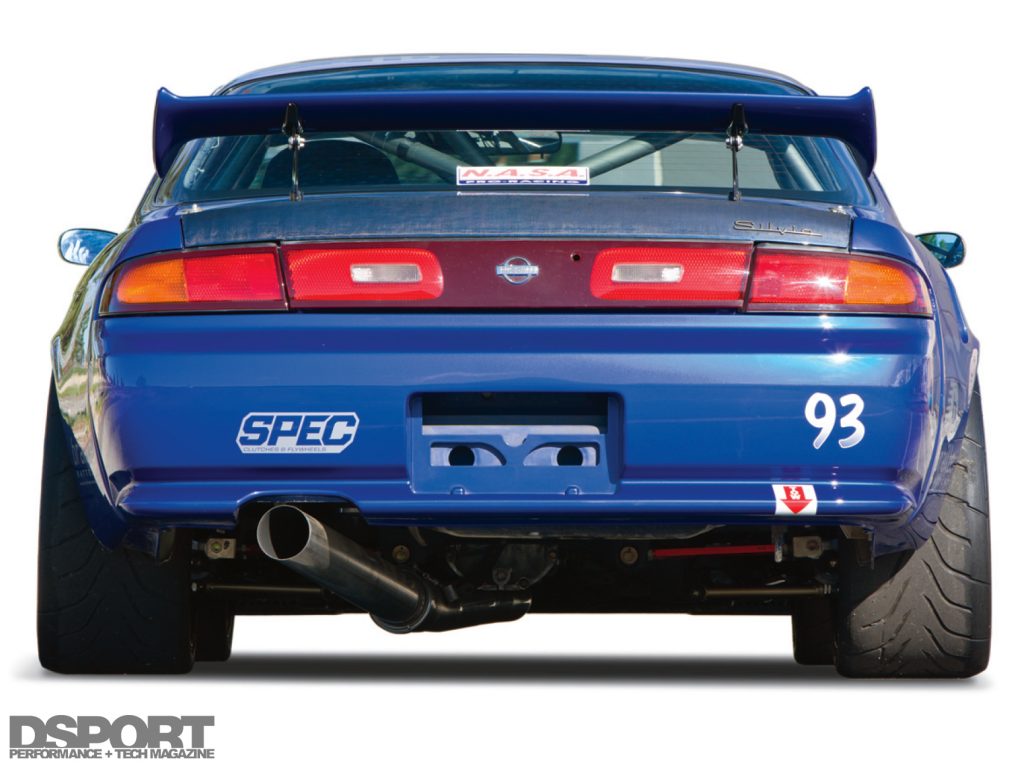