You are at:Home»The Cars»Features»This Aussie RH9 R32 GT-R Does More With Less

This Aussie RH9 R32 GT-R Does More With Less

In a world separate from the smog-laden, automotive bureaucratic nightmare that is the United States, a far off land called “Australia” is home to more than its fair share of R32 Skyline GT-Rs. Some are driven on Australian streets and thoroughfares simply as exotic sportscars, but others are subject to a barrage of modifications in the name of straight-line drag-racing performance. Australians tend to be fanatical about drag racing and the Skyline GT-R platform, so seeing one on the road or on a track in Australia is hardly an uncommon sight. To stand out from the norm, Australians have had to aspire for a combination of these goals consisting of full-interiors and street tires coupled with blisteringly fast quarter-mile times in the single digits. In Australia and around the world, achieving this duality of street-driven race-vehicle affords the car entry into an exclusive group of performance vehicles known as Club RH9. It is this club that Paul Diemar set out to gain entry to with his R32 Skyline GT-R, tacking on the desire to be known as the quickest and fastest GT-R to achieve such a feat with low-mounted twin turbochargers. 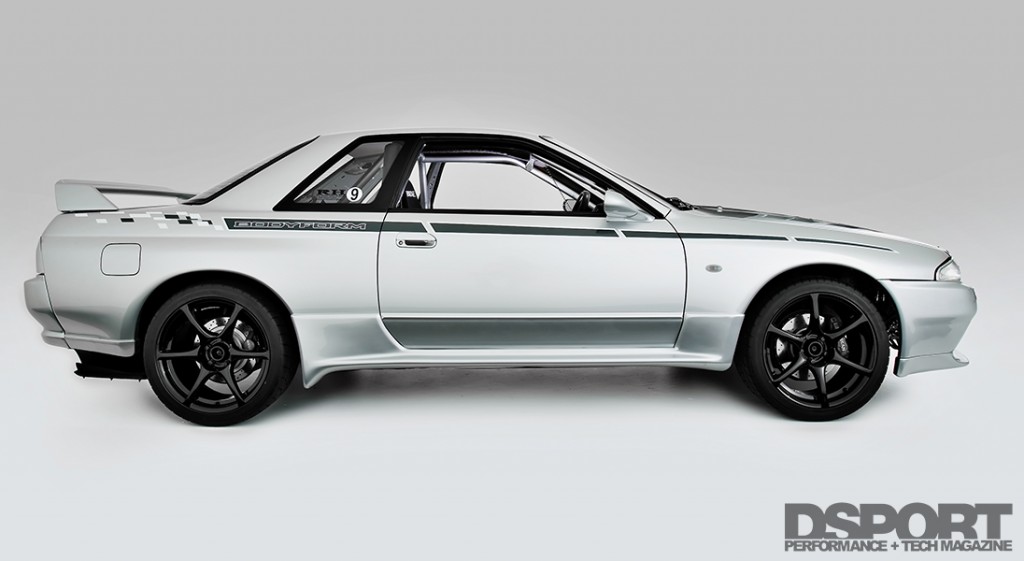 (Quick) Runs In The Family

Racing is quite natural for the Diemar household. Diemar’s wife Stacey was the fastest woman in the Super Street Class behind the wheel of this R32 GT-R, affectionately dubbed, “Twoogle”. To aid Diemar’s admission into Club RH9, Twoogle’s RB26DETT mill took a trip to Croydon Racing Developments for reinforcement. The longblock was torn down before being de-burred and acid dipped, after which it received a fresh bore hone. The factory crankshaft was then micro polished and assembled with a set of Cosworth Racing pistons and JUN Auto connecting rods. To minimize the notorious occurrences of oil starvation in the new RB26 assembly, a JUN Auto racing oil pump was installed along with a TOMEI Powered oil restrictor and 9-liter Metalcraft baffled oil pan. 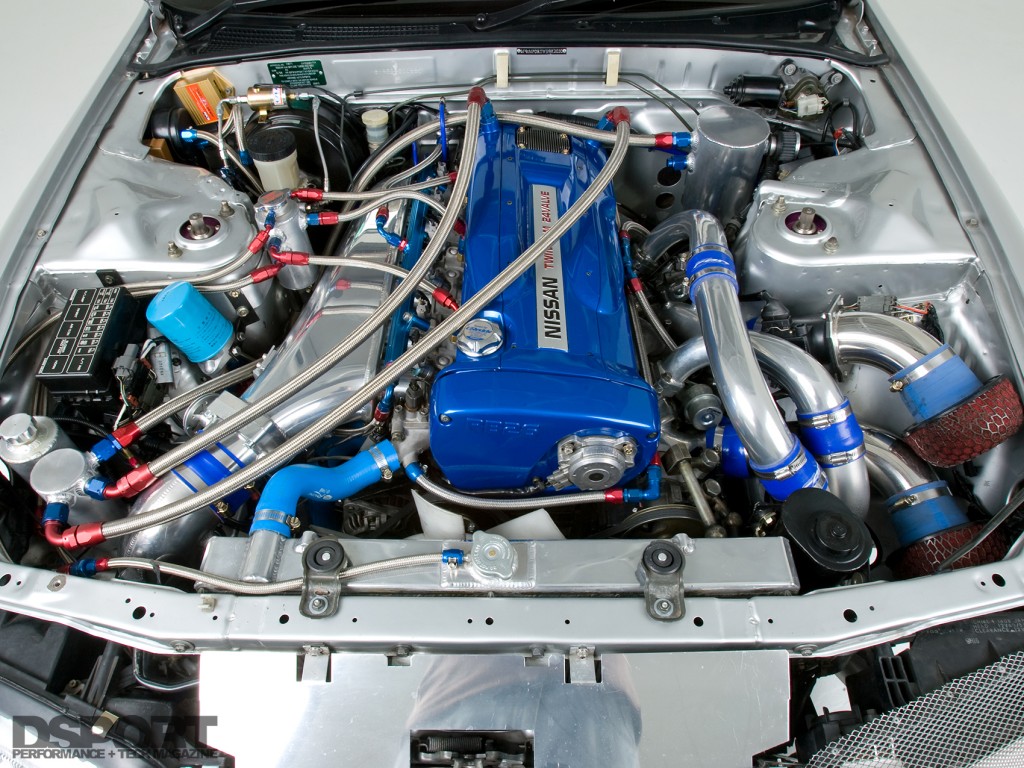 With the new rotating assembly in place, the cylinder head and valvetrain were upgraded to better exploit the RB26’s power-producing potential. Croydon race ported the cylinder head before seating oversized JUN Auto +1mm valves, springs and titanium retainers. TOMEI Powered buckets and shims were installed and measured to ensure proper valve clearance for a set of custom-ground camshafts of undisclosed specifications. The head was then reunited with the block by way of ARP 1⁄2-inch head studs to ensure head-to-block seal integrity, even under extremely high-boost conditions. 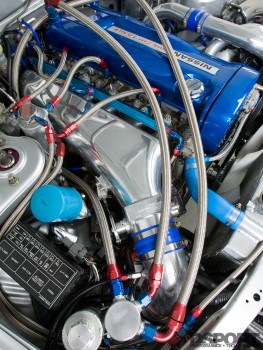 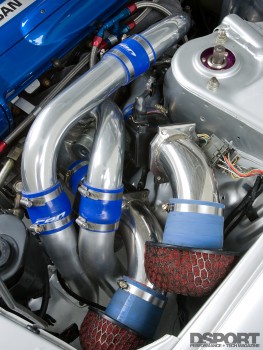 While Nissan engineers favored the responsiveness that individual throttle bodies delivered, aiming for peak power figures required optimizing the induction system for wide-open-throttle operation. Thus, the factory individual throttle bodies were scrapped in favor of an aluminum Hypertune manifold with a monstrous 102mm throttle body. The enlarged plenum and straight runners of the manifold distribute the incoming air charge chilled by a GReddy 5-row intercooler to the intake ports. As the charge reaches the ports, a six- pack of Blitz 1,000 cc/min injectors spray atomized race fuel into air stream on the way to the combustion chambers. 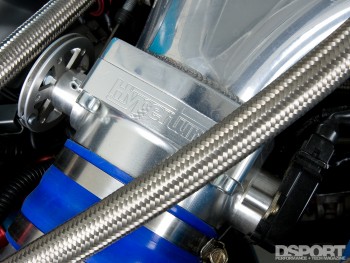 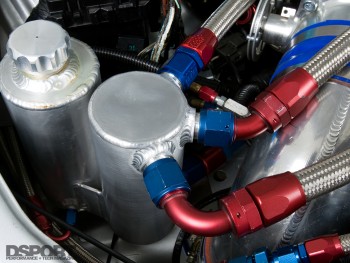 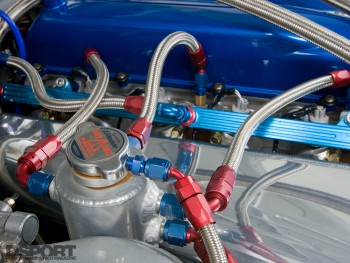 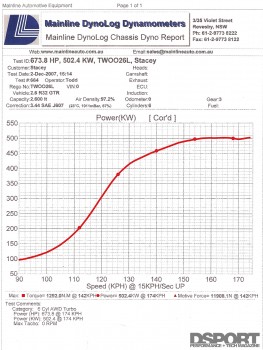 Snails Down Under, Horsepower Up & Over

Diemar had already achieved mid-to-low 10-second passes with this setup and a pair of HKS GT2540 turbochargers hanging from the exhaust manifold so he knew that breaking into the 9-second club would require more. A pair of HKS GT-RS turbochargers mated to low-mount stainless-steel manifolds were used to supply more boost pressure and more efficiently satisfy the aspiration demands of the rebuilt RB26 engine. With an A’PEXi Power FC regulating the fuel and ignition timing, the built RB26 turned the dyno’s rollers to the tune of 673 horsepower at 25 psi boost pressure. 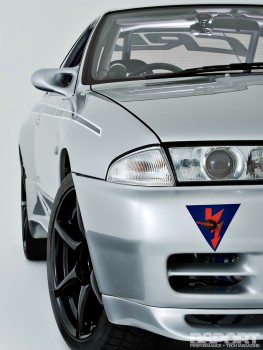 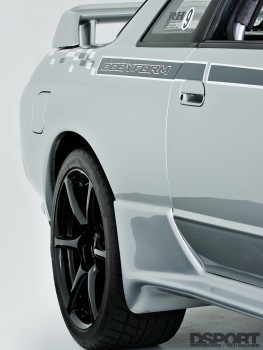 Getting Down The Track

While producing gratuitous amounts of power was essential for cutting quicker elapsed times at the strip, getting the power down efficiently was equally important. An OS Giken 5-speed short-ratio transmission was installed and equipped with a custom NPC twin-plate clutch capable of transferring up to 1,000 horsepower. Cusco’s 1-way front differential and a NISMO 2- way rear differential were enlisted to distribute power properly to each of the R32s driving corners.

A set of powder-coated factory wheels from a R34 Skyline GT-R wrapped with Mickey Thompson drag radials translates the engine torque into the R32’s forward movement. 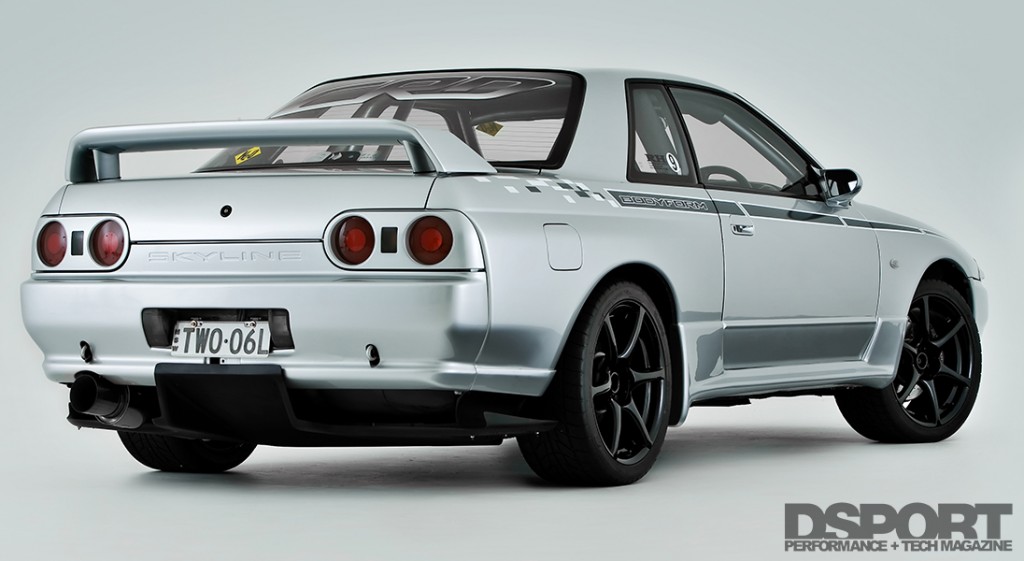 Since Diemar’s Skyline didn’t produce outrageous 4-digit horsepower, further modifications in the name of efficiency had to be uncovered and exploited to reach the single-digit goal. Losing traction or spinning tires would have been an incredible waste of resources and a preventable loss so the R32s suspension system was upgraded with a set of HKS coil-over dampers. These work in conjunction with a host of suspension links that ensure proper squat and launch geometry, ensuring the largest tire contact patch during each launch. Working on the other end of the power-to-weight ratio, Diemar removed as much weight out of the chassis as could be spared. The interior features the bare essentials for racing in the street class only, including a six-point cage that satisfies the Australian National Drag Racing Association’s requirements for safety and a FIA-certified BRIDE Zeta III race bucket coupled with Willans Harnesses. These modifications, in addition to Diemar’s incessant practice and long hours of seat time, have allowed him to achieve consistent 1.4-second 60-foot times at the strip and completed the final piece of the puzzle that was required for entry into the elusive Club RH9. 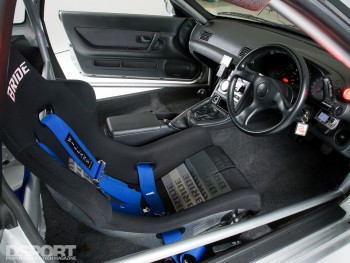 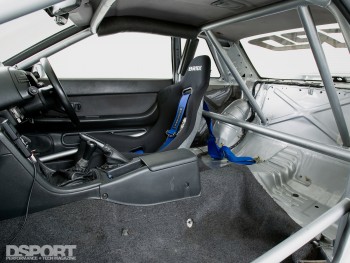 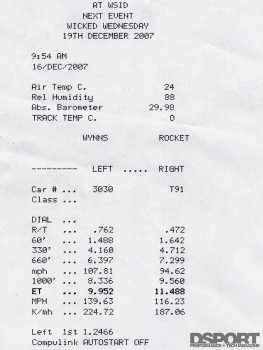 Diemar’s efforts were not in vain as his new setup finally allowed him to break into the single-digit realm and earn a certified and legitimate nine-second time slip. This was followed up with several more 9-second passes, his best of which set his personal best record e.t. at 9.972-seconds at 139 MPH and a lightning- fast 60-foot time of 1.412-seconds. Diemar’s personal 60-foot record also placed him on Australia’s High Performance Imports magazine’s list of top 10 60-foot times on drag radials. Since achieving this feat, Diemar has continued to raise the bar on himself, further improving his elapsed times and securing tenure in the elusive Club RH9 while coyly setting sights on the new, more elusive target, Club RH8. 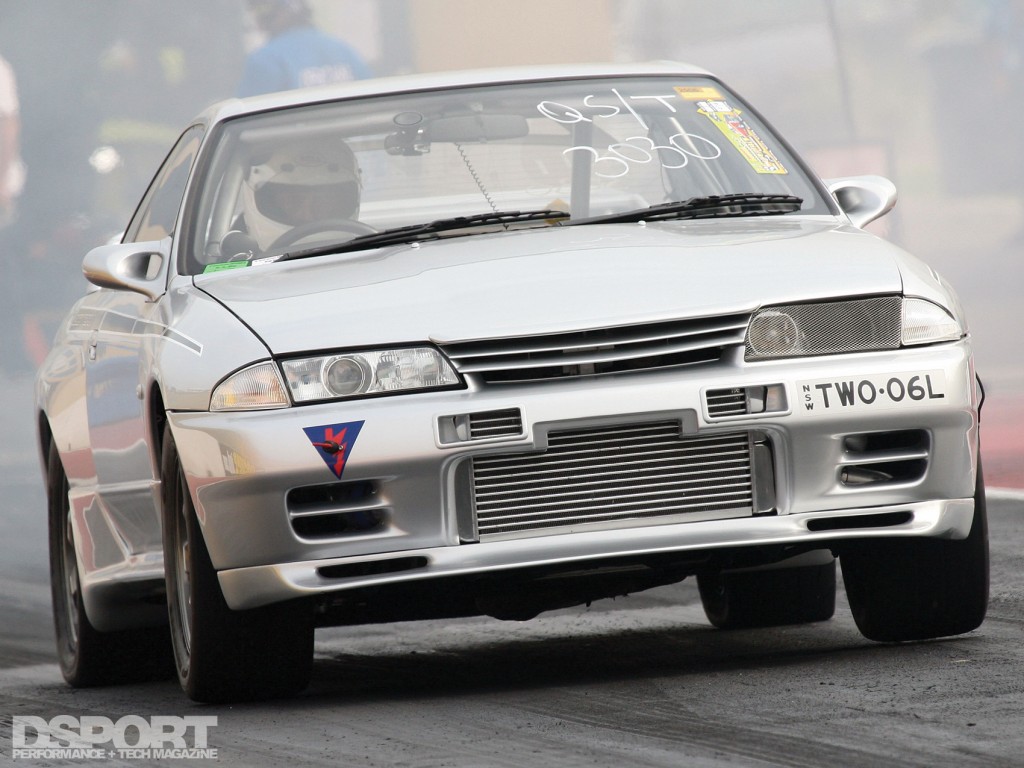