Putting together a performance parts combination to produce more power than you ever expected feels like finding a wad of cash in a jacket you haven’t worn in six months. There’s a sense of surprise, happiness and the inevitable daydreaming of how you are going to use this horsepower or cash to have some fun. On the flip side, having this new found power scrap your entire transmission feels like finding out you owe $2,500 on your taxes when you thought you were getting a refund. Thanks Obama! But seriously, transmission issues have plagued some of the best project vehicles of all time including Project Talon and Project RH9 GT-R.

While a broken transmission can seem like the end of the world, it isn’t. Long before anyone knew how to rebuild the DSM AWD transmissions, Project Talon destroyed every single used transmission available in Southern California and depleted the dealer’s inventory of new units. All in all, nearly $20,000 was spent in futility. Worst of all, no progress was made to find a solution at that time. This lesson influenced our decision to ante up nearly $15,000 to purchase a Holinger sequential transmission for our Project RH-9 R33 Skyline GT-R as soon as it produced enough power to kill the original transmission. While the purchase drained the savings account completely, it was money well spent. Over 40,000 street miles and 50 quarter-mile passes later, the Holinger has never let us down. 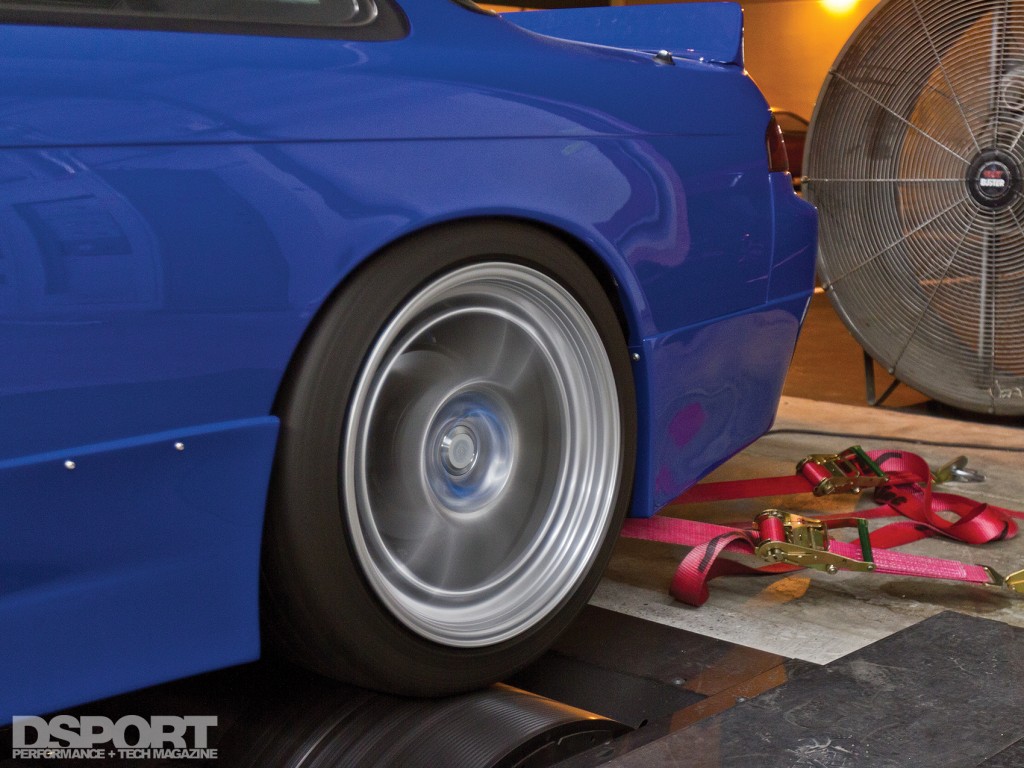 Making power from the turbo KA24 engine means nothing if you can’t get it to the ground.

If our ongoing KA vs. SR battle has proven anything, it’s that it is entirely possible to build a high- performance, turbocharged variant of the KA24DE engine. Jeren’s turbo KA24 in his Nissan S14 delivers over 500 horsepower (2016 Update: 700hp) to the wheels on pump gas. Considering that’s over three times the factory output, there is no doubt the factory transmission would be running on borrowed time. Fortunately, Jim Wolf Technology (JWT) was working on a solution that made perfect sense. 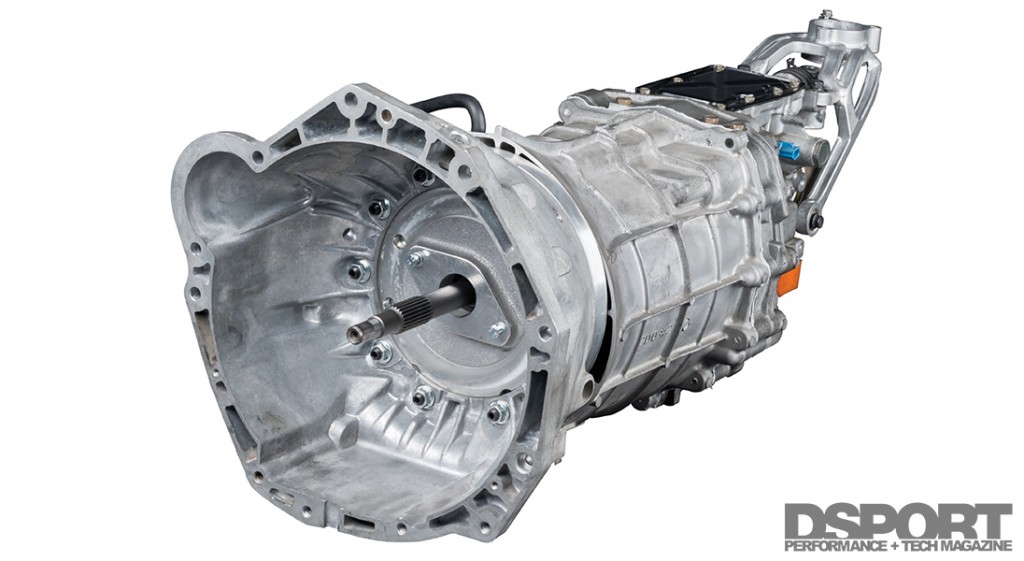 With the JWT adapter kit, the 6-speed transmission from a 350Z can be fitted on to a KA24 engine.

What transmission has six speeds, the potential to survive over 800 horsepower and a $1,700 street price? It’s the six-speed transmission from the Nissan 350Z. The Nissan part number 32010-CD009 transmission is the updated and improved-synchro edition of the six-speed found in the later 350Zs. While this FS6R31A transmission isn’t a simple bolt-on replacement for the original 5-speed in the 240SX, JWT has already made some of the key pieces needed to put the 350Z’s six-speed transmission on to an SR or KA engine. With the help of The Driveshaft Shop and the combined talents of our DSPORT engineering, machining and fabrication staff, we were able to perform the first-successful 6-speed transplant in a KA24/240SX S14 using the JWT bellhousing adapter and JWT clutch system. 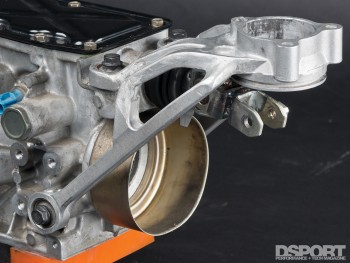 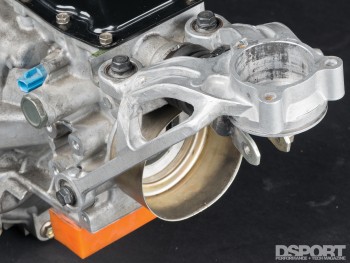 Both the shifter mount and the shifter rod must be shortened as much as possible to fit the shifter in the right location on the 240SX. 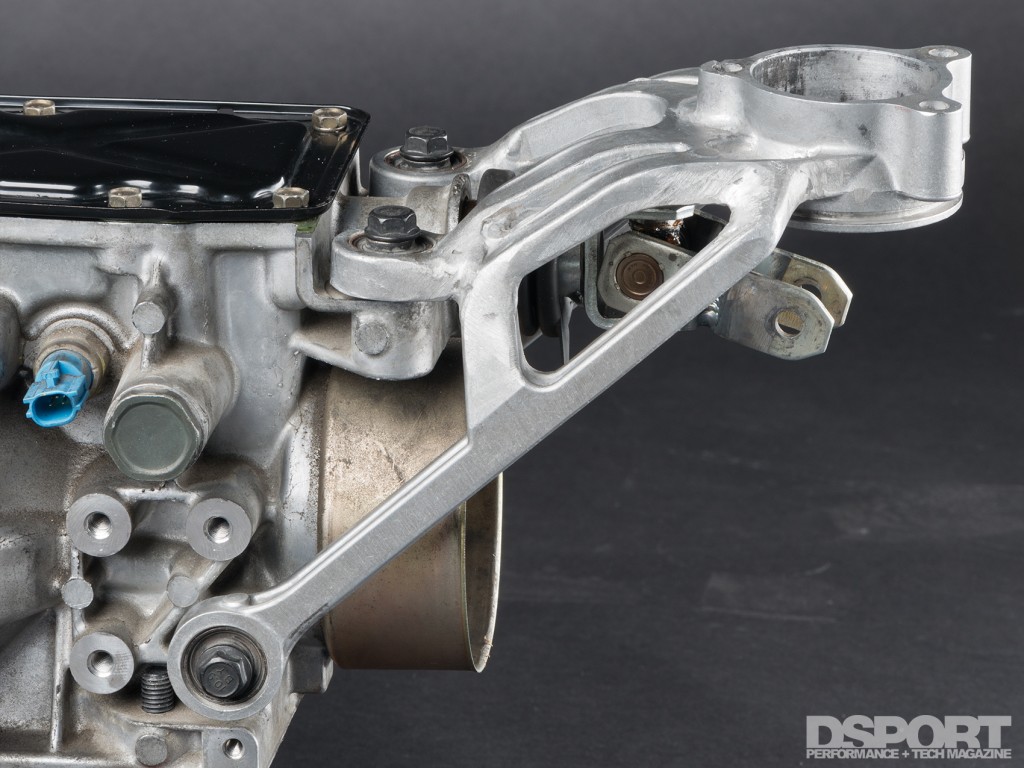 Until someone decides to cast or machine a bolt-in shifter mount for this transplant, cutting and welding of a factory bracket is required. 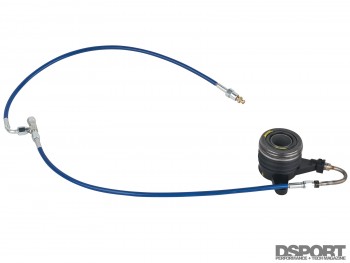 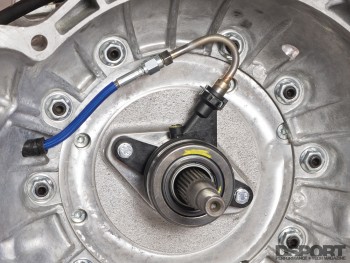 A custom braided-steel outer, Teflon inner -3AN hose mates to a brazed fitting on the modified stock hydraulic line. Mesa Hose (949.645.2661) made the custom setup for us. 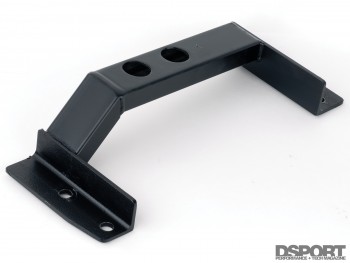 To complete the conversion, we knew that we would need to fabricate a transmission mount, modify the 350Z shifter bracket for fitment in the 240SX and have a custom driveshaft made. Our in- house Chief Designer/Fabricator Len Higa designed and built a transmission mount that properly positioned and secured the physically larger transmission in the vehicle. Len also modified the 350Z shifter rod and shifter bracket to minimize the overall length. Minimizing this length positioned the new shifter as close to the original position as possible. In fact, it’s only 2.5-to-3.0 inches back from its original location. This new location required extending the original shifter cutout in the transmission tunnel. Considering how far back Jeren sits in the 240SX (with the stilts that he calls legs on his 6’ 7” frame), this was probably an improvement to the ergonomics in his case.

In addition to providing the solution to get the 350Z trans mated to the 240SX’s KA24DE engine, JWT also engineered the solution to get the power from the engine to the input shaft of the transmission. A custom aluminum flywheel is available for 225, 240 or 250mm JWT clutch systems. Looking for a clutch solution that could handle plenty of abuse, we opted for the metallic disc and 1,200 kgf 240mm pressure plate. This system has an advertised torque handling capacity of 650 lb- ft. While the turbo KA24DE is currently producing 495 lb-ft of torque, even a small shot from a nitrous oxide system might put us close to the 600 lb-ft mark. Hence, this seems like a great choice. 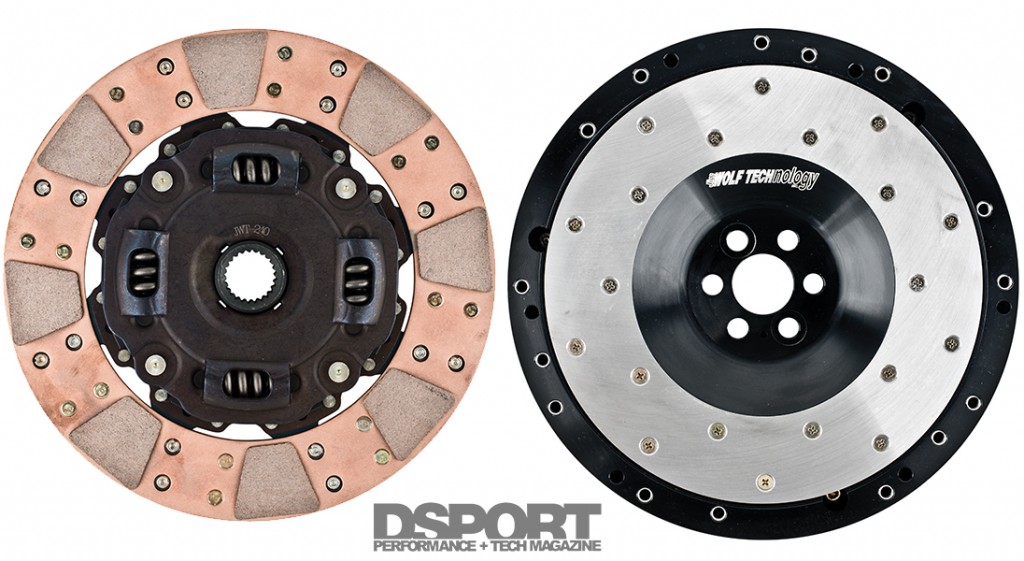 JWT offers a number of clutch options. We opted for the metallic clutch to handle our abuse. 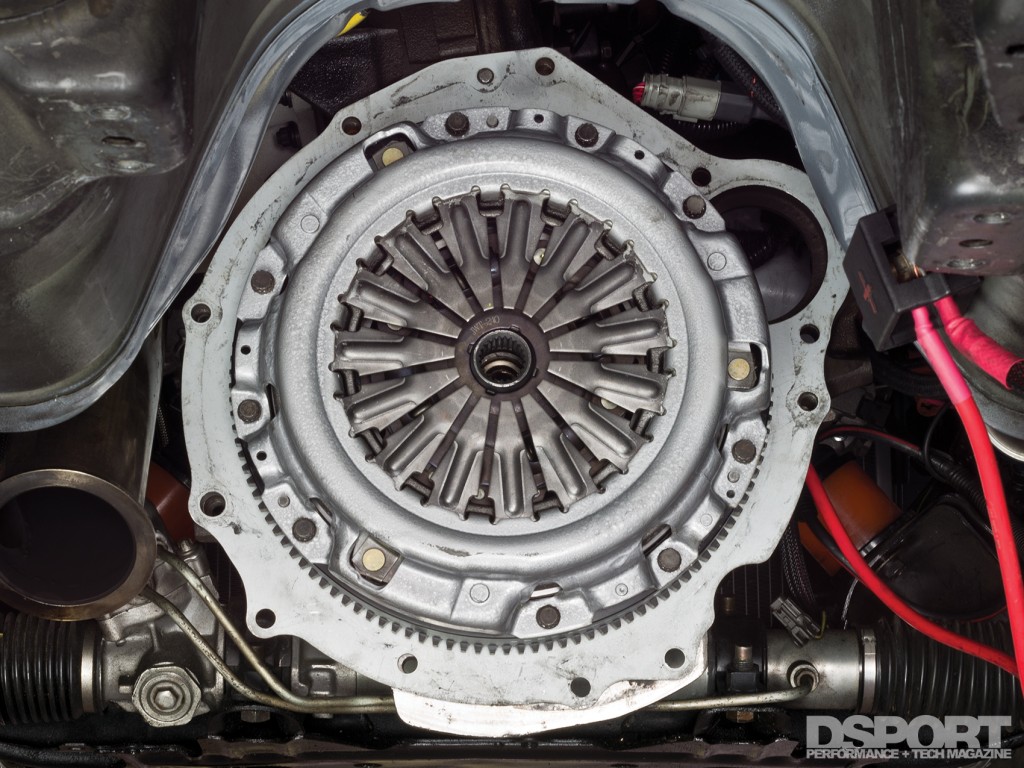 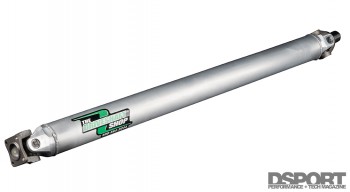 Since the output shaft of the 350Z is massive in comparison to the 240’s transmission and since the overall length of the new transmission is longer, a new driveshaft was a must. Fortunately, The Driveshaft Shop built us a lightweight, high-strength aluminum driveshaft to the correct length with the correct yokes on both ends. Best of all, these guys cranked out the custom driveshaft in no time. We literally had it in our hands the same week that we ordered it. 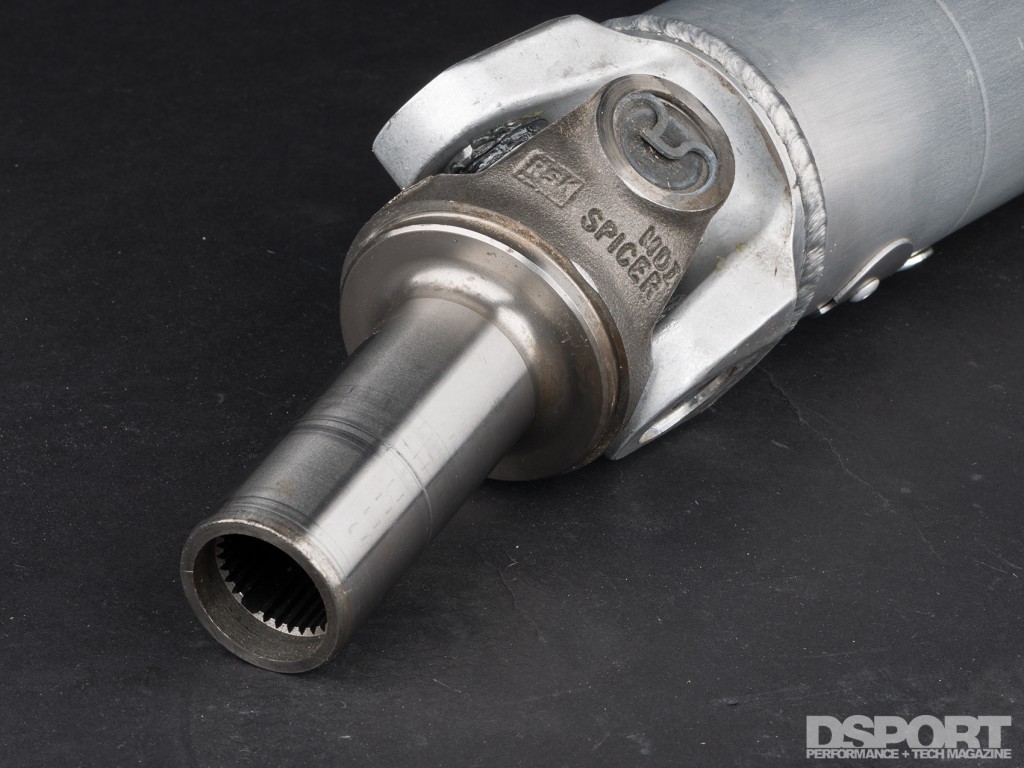 If the story stopped here, it would sound like we tackled a challenging and involved project without much incident. In fact, the transmission actually came in and out of the vehicle no less than a half-dozen times (we lost count somewhere along the way) and we annihilated three hydraulic release assemblies in the process. Fortunately, no one else will have to suffer the same since we found the solution to the issue and it has since been remedied. The hydraulic release assembly was originally positioned too far forward on the JWT adapter kit with our clutch combination. This was causing the release assembly to contact the clutch disc and immediately get wiped out. After pinpointing the issue and following up with measurements (and numerous checking installations), we solved the problem. Now, all of the JWT adapter kits provide this optimized position of the hydraulic release assembly. Since the clutch master cylinders are the same bore in both the 240SX and 350Z, the pedal adjustment can be made on the factory pedal assembly.

The 350Z 6-speed transmission does not have an integral vehicle speed sensor. As a result, another speed sensor from the driveshaft will need to be fed to your speedometer. If you are lucky enough to have an ABS equipped 240SX, you can use a Dakota Digital converter box (about $85) to provide the proper speedometer calibration. If you do not have an ABS-equipped 240SX, you’ll need to mount a driveshaft speed sensor on the input yoke of your differential. Stay tuned as we’ll have a Quick Tech on the process next month. 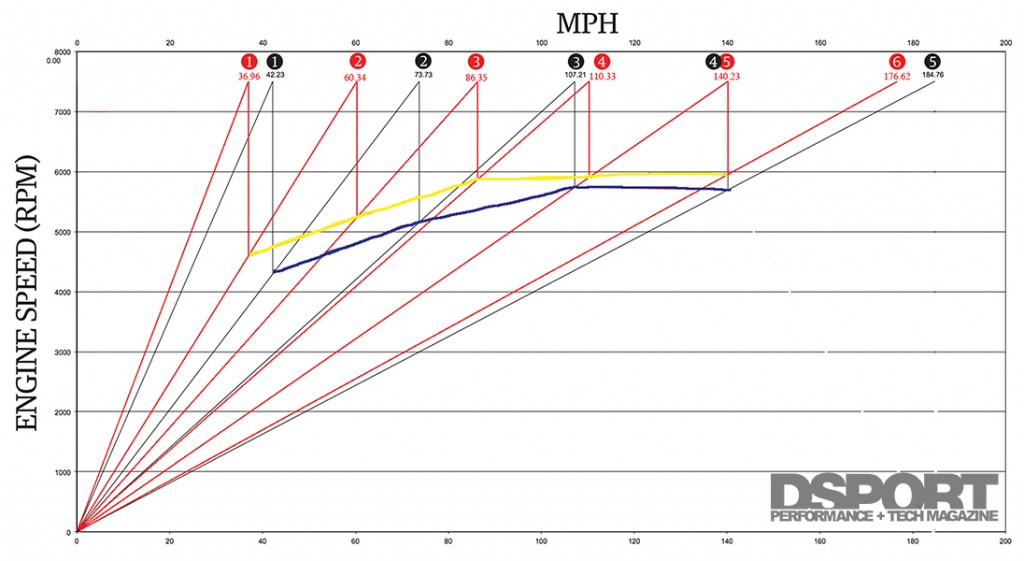 Keeping the engine from dropping out of the powerband is a major benefit of the 6-speed swap.

Replacing the factory 5-speed with the 350Z’s 6-speed is a must for anyone planning to make more than 300whp in a 240SX. Not only does the 6-speed have triple the strength of the original 5-speed transmission, it also delivers superior performance due to its closer-ratio design. The gearing is optimized for performance. With a set of 275/40R17 (or another 25.7-inch tall tire) on the rear, zero-to-60 blasts can be completed at the top of second gear at our 7,500 RPM redline. When going into Third, the engine RPM has a short drop to just 5,250 RPM. The 3-4 shift is even better as the engine starts at 5,870 RPM in Fourth. The performance spacing keeps the engine just over the peak torque RPM ensuring that auto-magic traction control is taking place. 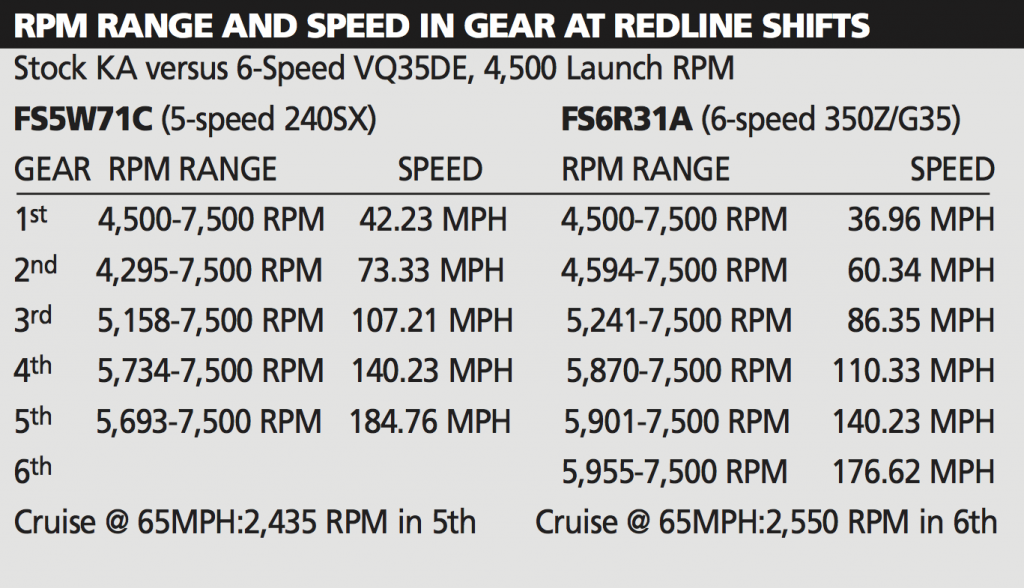 When not making shifts at redline, the 6-speed cruises with the best of them. At 65 MPH, sixth gear will give you 2,550 RPM. For comparison, 5th gear in the stock transmission was a little over 100 RPM lower at 2,435 RPM. Hence there isn’t a need to change the final drive to maintain nearly the same cruise RPM.