Formula1 represents the cutting edge of automotive technology. While F1 performance may not be feasible in a streetcar, some of the amazing innovations pioneered for the pinnacle of automobile racing finds it’s way into production automobiles due to the trickle down effect. In the early 80s, Honda commissioned the world-renowned Italian design house Pininfarina to pen the lines of the HP-X concept car that eventually led to the design of the NSX, Honda’s first world-class exotic car. Produced from 1990 through 2005, the NSX featured numerous innovations that hail from Formula1 and was the first production car with an all-aluminum monocoque body (which reduced its weight by over 440 pounds compared to steel) with bold and timeless lines. It also featured aluminum suspension arms and Honda’s variable valve timing technology in a 3.0-liter V6 engine producing 270 naturally-aspirated horsepower. Text by Richard Fong // Photos by Larry Chen 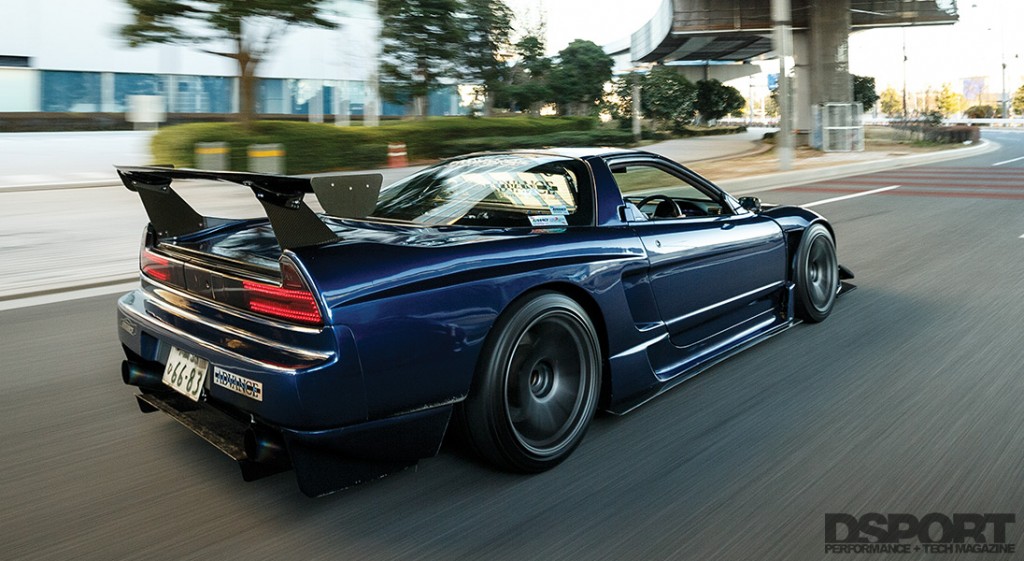 Like many high-performance machines with high-tech pedigrees, the NSX was meant to be driven hard. People like Mr. J, who hail from Japan’s Kanagawa prefecture (a significant part of the bustling metropolis, Tokyo), agree. Mr. J’s first NSX was a track oriented NSX-R or NSX Type R. This machine was 265 pounds lighter than a standard NSX and offered numerous off the lot improvements. Mr. J experienced these benefits on and off the track with his Type R and was quite fond of his street machine. Unfortunately, this vehicle was stolen after he had only owned it for a few months. Undeterred from owning another NSX, he then replaced the Type R with this 1994 NA1 NSX, which he has taken through a 17-year evolution. 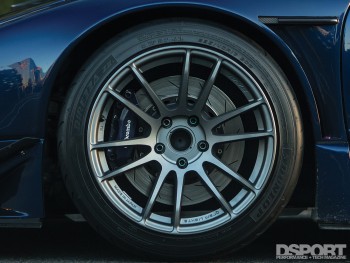 Mr. J, known to most by his online profile, js_nsx, missed the performance of his Type R and started upgrading his NA1 within the first week he owned it. His goal was to eventually raise the performance of his NSX to be like the Type R. He started with the usual footwork upgrades to improve the handling. Numerous trips to the track along with six or seven suspension changes later, he found contentment with Advance/ Bilstein E12 adjustable dampers with Eibach springs. The addition of front pivot clamps and Advance pillow ball bushings helped to tighten up the suspension and mitigate alignment changes due to suspension travel and road conditions. These changes were soon followed by brake upgrades in the form of Brembo four-piston calipers putting the squeeze on Endless pads. The pads apply friction to slotted rotors to shave speed efficiently. 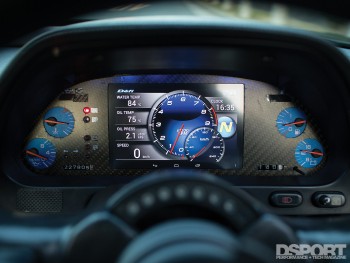 Between the daily commute and trips to the track, Mr. J started getting into the local show scene. He hated having the same parts as every other NSX, but differentiating himself from everyone else would prove a challenge, given the limited aftermarket resources that focused on the NSX. Thus, he had to resort to custom upgrades that would give his NA1 a unique presence. Doing much of the work himself, he made pieces from fiberglass and dry carbon fiber, and reupholstered some of the interior pieces with leather. He takes great pride in the custom gauge cluster that he made. Based on an Android OS Nexus tablet, he cut a piece of carbon fiber to fit in place of the factory gauge cluster while positioning the tablet in the process. He wired in the touch screen device along with the speedometer, odometer, essential alert lights and analog gauges. He programmed the tablet to serve as a multi-function display that also provides internet connectivity. On the exterior, the NSX’s deep factory blue hue was applied to an assortment of Marga Hills widebody aero kit pieces to give the NA1 some girth. Mr. J fashioned a custom splitter, diffuser and belly pan to help with airflow under the chassis. A GT wing composed of Garage BB and Matrix components further adds to the downforce being applied over the rear wheels. Functional aero combined with Mr. J’s custom touch further separated his NSX from the rest. 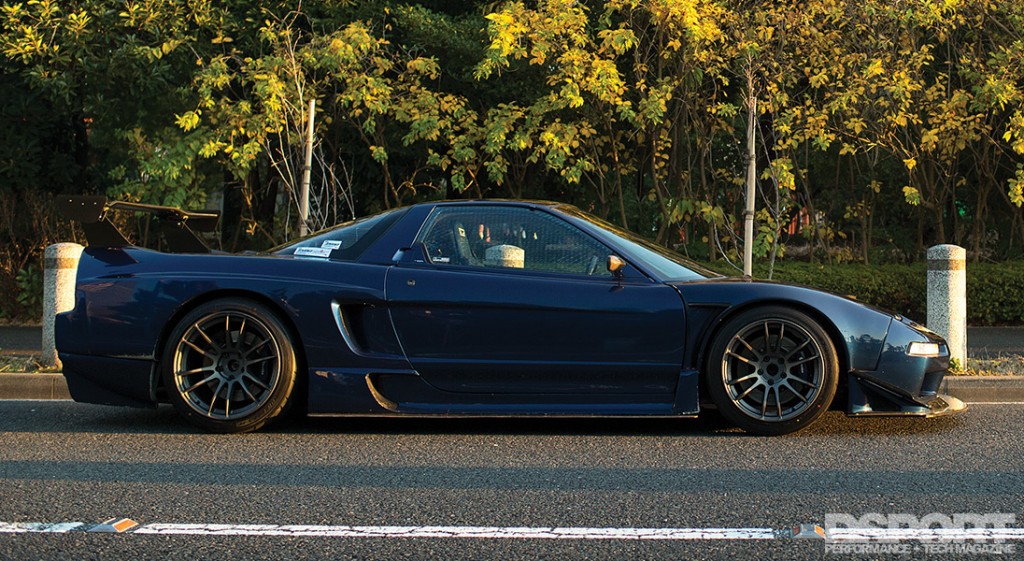 While the show scene motivated him to customize the NSX, he was still going to the track and pushing the NSX for quicker lap times. Between the footwork and the aero, Mr. J locked in some decent lap times on Yokohama Neova AD08 tires. At Fuji Speedway, he turned a 2’01.991 lap time, right on the cusp of breaking the two minute mark. He changed up his tire selection to Advan A050 M-compound and returned to Fuji, recording a best lap time of 1’59.282 and earning him the satisfaction of joining Advance’s “Under 2 Minutes Members Club” and brandishing the decal proudly. But the benefit and drawback to attacking the track is that the lack of power became apparent. Mr. J commented, “I started to go to the track more frequently, and while I started to improve my lap times with more practice, I also realized that the NSX needed more power. On the street, the lack of power was not as apparent, so I didn’t miss it as much. Now that my focus shifted toward quicker lap times, I could see that it was time to get more out of the engine.” On that note, Mr. J took the NSX to Advance to have work done on the C30A engine. 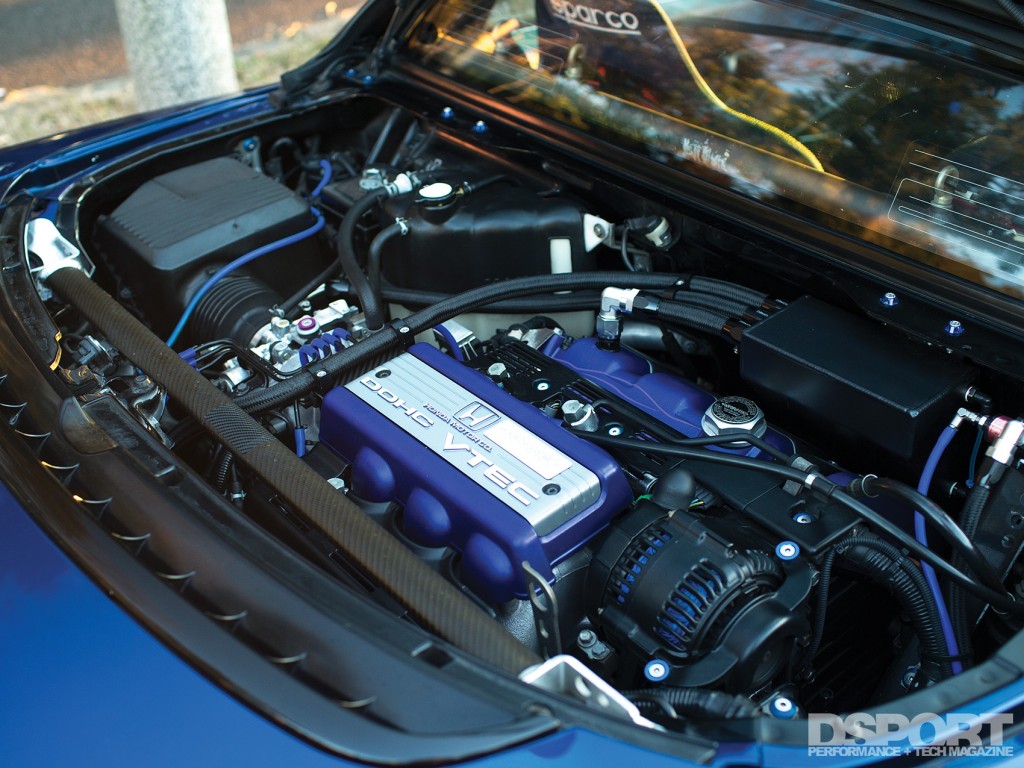 Once in the hands of Advance Co., Ltd’s owner, Susumu Shimbori, the C30A block was dropped from its midship engine bay and prepped for new internals. The naturally- aspirated engine was overbored by 2mm before Advance dropped in a set of 92mm Toda Racing pistons in a high, 12.0-to-1 compression ratio. The pistons make the connection to the stock crankshaft by way of Toda Racing connecting rods. To optimize the benefits of the increased bore size and displacement, longer duration Toda Racing Type-A billet camshafts provide additional lift to the Toda Racing valvetrain to increase the airflow in and out of the cylinders. Once combusted, the exhaust gasses flow through a pair of Fujitsubo stainless-steel headers before exiting through an Advance titanium exhaust at the rear of the chassis. Once the HKS FCON V Pro engine management was calibrated for the higher- compression engine, cams and exhaust system, the NSX measured 345 horsepower at the hubs of a Dynapack dynamometer. 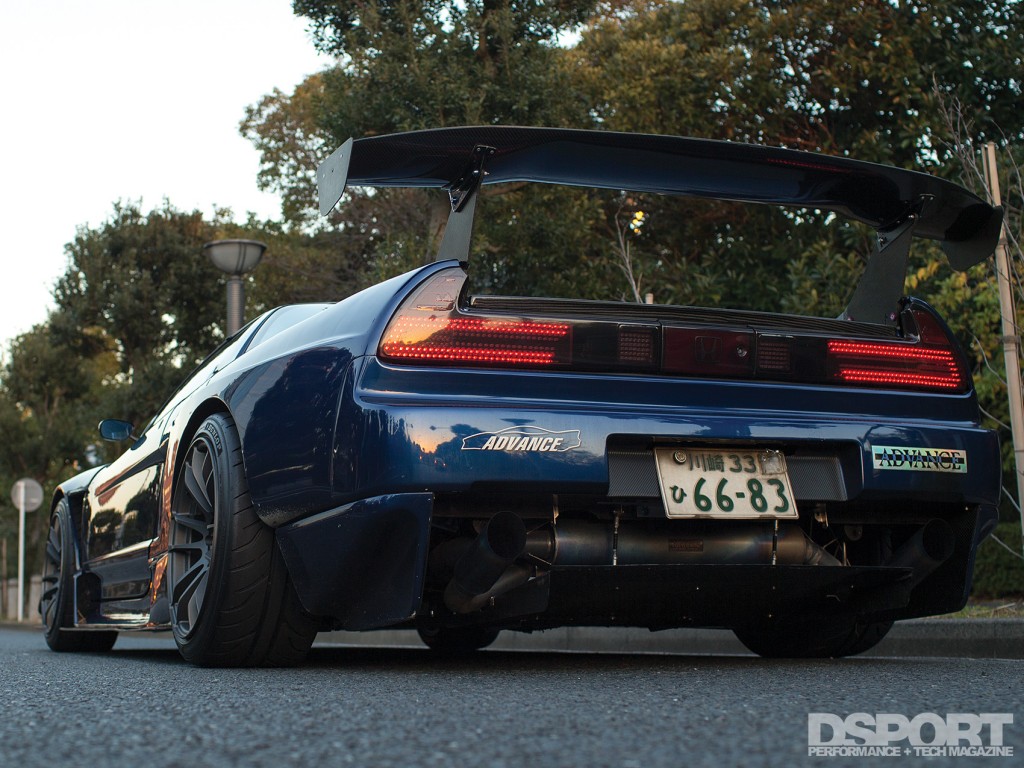 With a larger engine in place, Mr. J returned to Fuji Speedway to tackle his lap times. Running on Advan A050 tires once again, he managed to trim off nearly four seconds from his previous best lap time, dropping down to a 1’55.322. At Tsukuba Circuit, his lap times also fell, now turning a 1’01.486 (on the stickier A050 tires). For a street driven vehicle, these lap times are competitive with the contenders that compete in time attack at these racetracks. Aside from swapping between his street and track wheel/ tire combo, Mr. J is quick to point out that his NSX is driven on the streets in its track setup, much the way his stolen Type R was. While most would think that a track-tuned car would be undesirable on the street, he relishes in all that the NSX has to offer, enjoying the F1 technology that has trickled down to his NA1. For all the effort, Mr. J wouldn’t have it any other way. 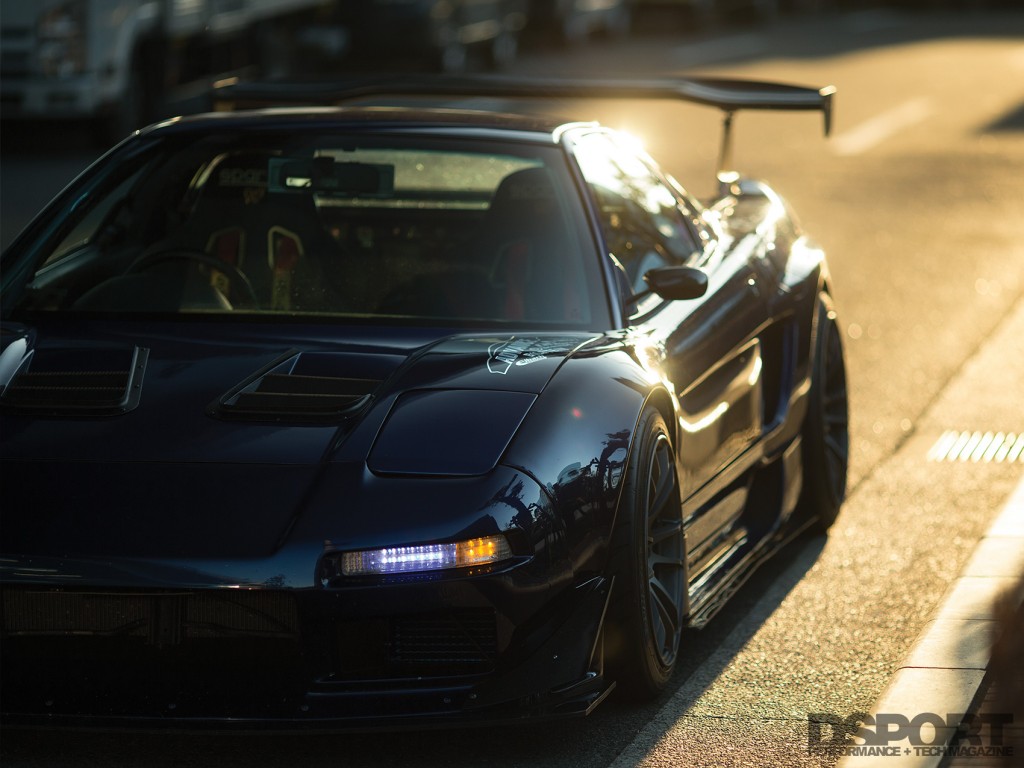