You are at:Home»The Cars»Features»Triple D 240SX | Drag, Drift, or Drive, This RB-Powered Nissan 240SX Is Ready For Action

While just about every DSPORT reader would love to have a 12-car garage filled with a car for every occasion, the reality is that the majority can only afford a single vehicle. When you have just one vehicle that you are going to be daily-driving and racing at the track, there’s no avoiding the “total tuning concept.” For our Triple D Nissan 240SX, the plan was to build a clean daily-driver that could hold its own in drift and drag competition.

As we mentioned in our sneak peak of this buildup, Jensen Oda, this car’s owner and builder, is no stranger to performance. For several years, Jensen Oda had the opportunity to work with A’PEX Integration’s R&D department. It was there that Jensen learned his welding skills and fabrication crafts.

As the Triple D 240SX demonstrates, hard work, a good measure of skill and a little cash can go a long way. Now armed with 440-plus wheel horsepower, this 240SX can hang with the best of them. 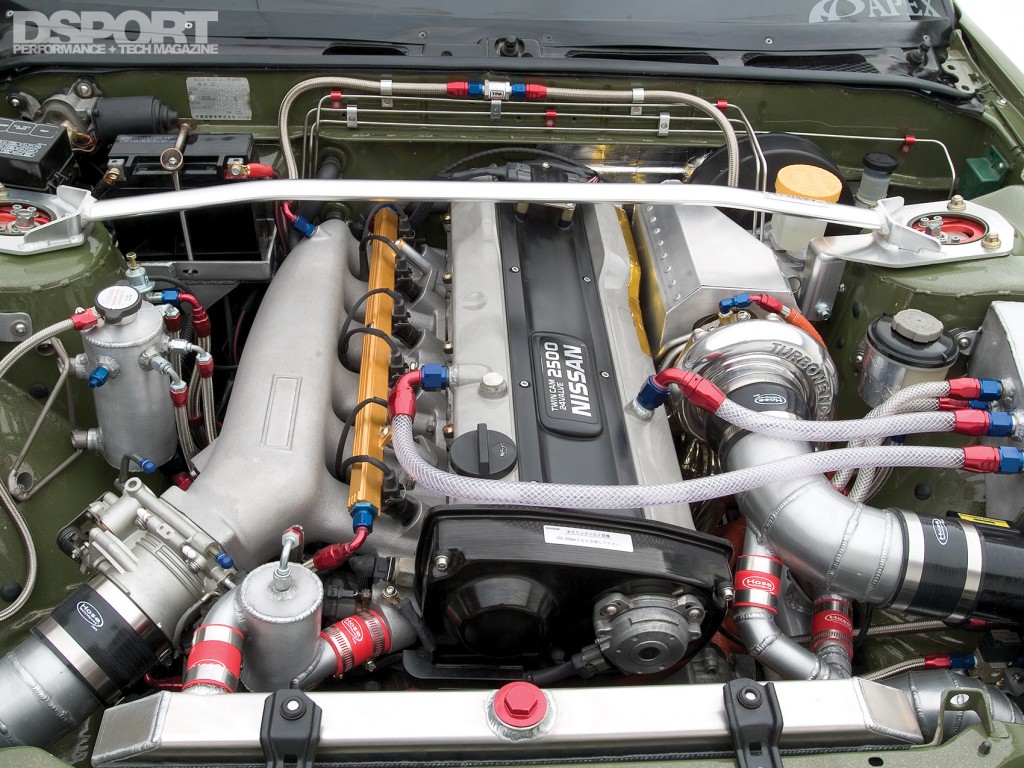 The RB is Nissan’s engine code that stands for Race Bred. With an ultra-short stroke, an inline six-cylinder design and a 24-valve cylinder head, the RB series of engines are designed to produce power while excelling in durability. The “top dog” of RB engines is the RB26DETT, followed by the RB25DET. The RB26 is available in the all-wheel-drive GT-R version of the 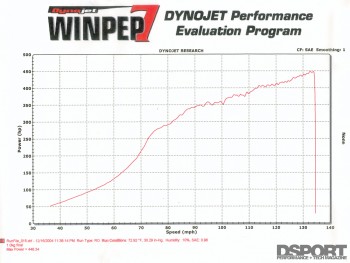 Nissan Skyline while the RB25 is the bullet loaded into the rear-wheel-drive GT-S version of the Skyline. Beside a slight difference in displacement (due to a 2mm shorter stroke), the major difference between the two engines can be found in the cylinder head and induction system. The RB26 uses a racing-inspired bucket-over-shim mechanical valvetrain that’s been proven to 11,000 rpm and beyond with upgraded aftermarket components. Additionally, the RB26 uses an individual throttle body setup where each cylinder is throttled by a 45mm butterfly. On the RB25, the valvetrain uses hydraulic lash adjusters which impose a limit to super high rpm operation. RB25 valves are slightly smaller (-0.5mm intake, -1.0mm exhaust) and the intake is just a single throttle body design. The major advantage of the RB25 over the RB26 is the cost involved with the conversion. However, if 400-450 horsepower on pump gas is the ultimate goal, there really is no need to spend the additional money for the RB26 swap.

To perform the swap of the RB into the 240SX chassis, a 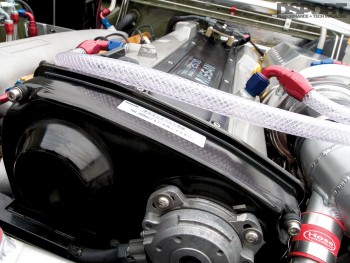 Since budget was a definite consideration on this project, the engine was only freshened up with a new set of rings and an A’PEX Integration 1.5mm metal head gasket. No aftermarket rods or pistons were used. However, the factory bumpsticks were replaced with Tomei 265 intake and exhaust camshafts. To feed the engine a steady supply of air, a GReddy surge tank was selected along with a Q45 90mm throttle body. 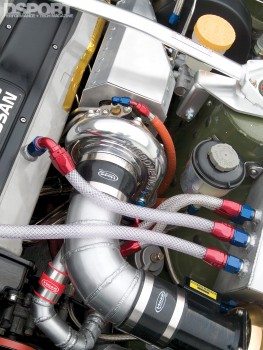 Due to the confines of the 240SX engine compartment, a Wasabi Garage stainless-steel tubular manifold was chosen, as it provides a top mount location for the turbocharger. The turbocharger selected needed to produce good mid-range power while still having the ability to produce in excess of 400 wheel horsepower on pump gas. A custom Turbonetics hybrid turbocharger featuring a 60-1 compressor, Stage-V turbine wheel and a T4 0.58 A/R turbine housing was selected. An A’PEX Integration 45mm racing wastegate was used to ensure that exhaust gases bled away from the turbine once peak boost pressure is reached. The outlet of the wastegate was plumbed back into the exhaust to keep things quiet while the engine is blasting.