– the most advanced V6 ever offered by Infiniti 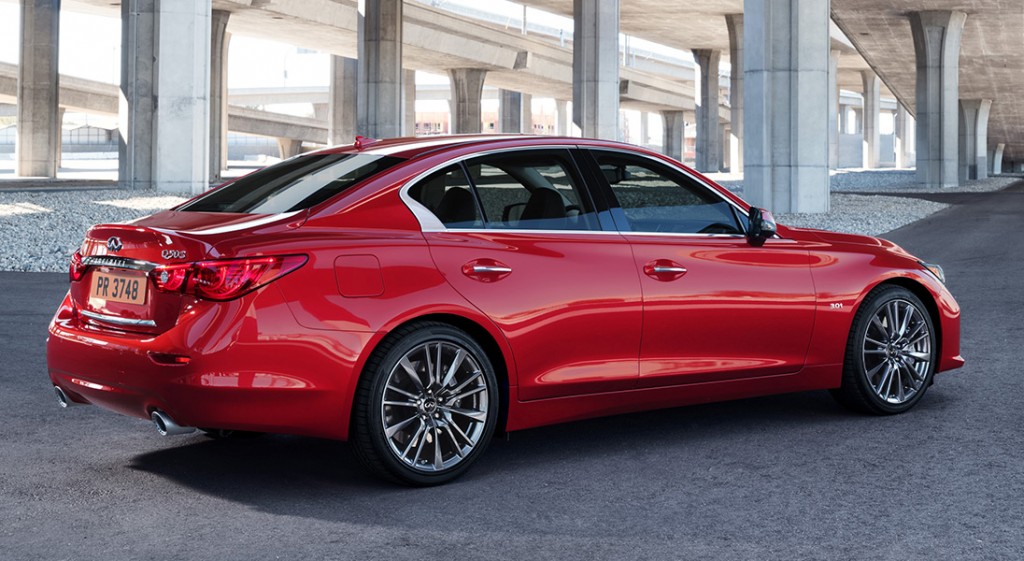 NASHVILLE (Dec. 15, 2015) – Infiniti’s new compact, lightweight 3.0-liter V6 twin-turbo engine is the most advanced V6 engine that the brand has ever offered, striking an ideal balance between drivability, efficiency, and performance.

The 3.0-liter V6 twin-turbo is an all-new engine from the new and exclusive VR- series powertrain family, born out of the brand’s longstanding heritage of V6 powertrain production. The new engine has been engineered to empower the driver and offer increased power and torque and higher levels of efficiency than any comparable predecessors from the company.

The engine’s reduced weight and contained size is credited, in part, to a lighter and more compact cylinder block. The result is greater mechanical efficiency, while a series of new features and in-house innovations secure superior performance.

Selected Infiniti models will be equipped with the all-new 3.0-liter V6 twin-turbo from 2016 onwards, with the engine available in two performance levels – 300 or 400 horsepower. Both engines share the same technologies and offer the same unrivalled sensation of potent and immediate power delivery. 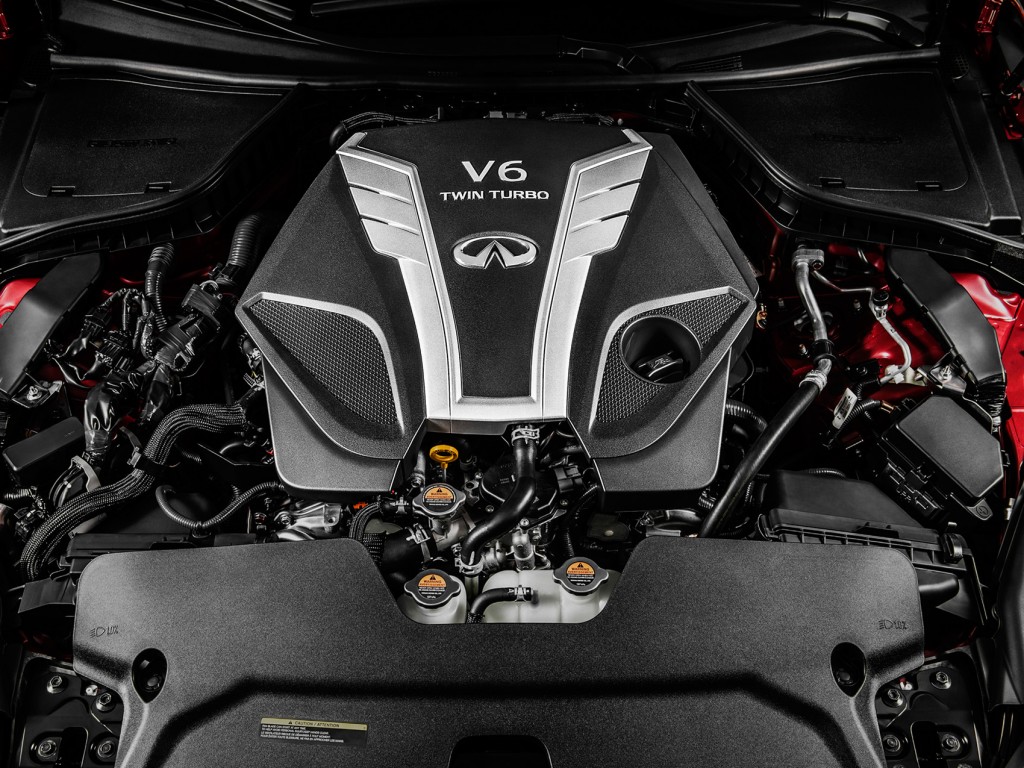 The most advanced V6 engine Infiniti has ever offered

The all-new VR-series 3.0-liter V6 twin-turbo engines deliver a compelling combination of drivability, efficiency, and performance. The VR engines will be used in new Infiniti models that have been engineered to satisfy every Infiniti market worldwide, signaling the growing presence of the brand globally.

The all-new 3.0-liter V6 twin-turbo engine was created through extensive in- house experience of six-cylinder powertrain development and backed up by a strong history of V6 engine production. The VQ-series V6 powertrain family, predecessor to VR, has been a long-established and multi-award winning series of engines that has appeared in Infiniti models since 1994. For fourteen years, from 1995 to 2008, this VQ engine was listed as one of “Ward’s 10 Best Engines,” an unrivalled achievement.

While the 300 horsepower version is fitted with a single water pump, the 400 horsepower engine uses two water pumps for more effective management of heat when under operating at higher loads. In addition, for the 400 horsepower variant an optical turbo speed sensor gives a 30 percent power boost to the turbo system by allowing the blades to spin faster.

These outputs have been achieved while ensuring an improvement in fuel efficiency of up to 6.7 percent. This represents a best-in-class power-to- efficiency ratio for the 400 horsepower unit.

This power-to-efficiency performance was made possible thanks to a set of newly developed features. Advanced timing control ensures improved responsiveness, enabling quicker reactions to driver inputs.

A new electric motor is fitted to the valve timing system, increasing the speed of the throttle for enhanced response times. Not only does this have a positive impact on performance but also efficiency, with the engine able to operate more efficiently through closer control of cylinder combustion.

In addition, the V6 engine features a new turbine speed sensor, which allows for the twin-turbo system to perform at up to 220,000 rpm – at steady condition and 240,000 rpm at transient condition – higher than ever before for a V6 power unit. With greater capacity for faster revolutions, the twin turbochargers boost the higher-powered version of the engine to deliver higher power and torque. The turbo speed sensor on the 400 horsepower version allows for up to 30 percent more power output.

The engineers have developed a water-cooled intercooler system to further improve performance and efficiency. The system rapidly cools air as it enters the twin-turbo system, reducing turbo lag and allowing for more immediate acceleration. The secondary result is a cooling system that is more compact – meaning a shorter flow path for air entering the turbocharger to enable quicker engine response. 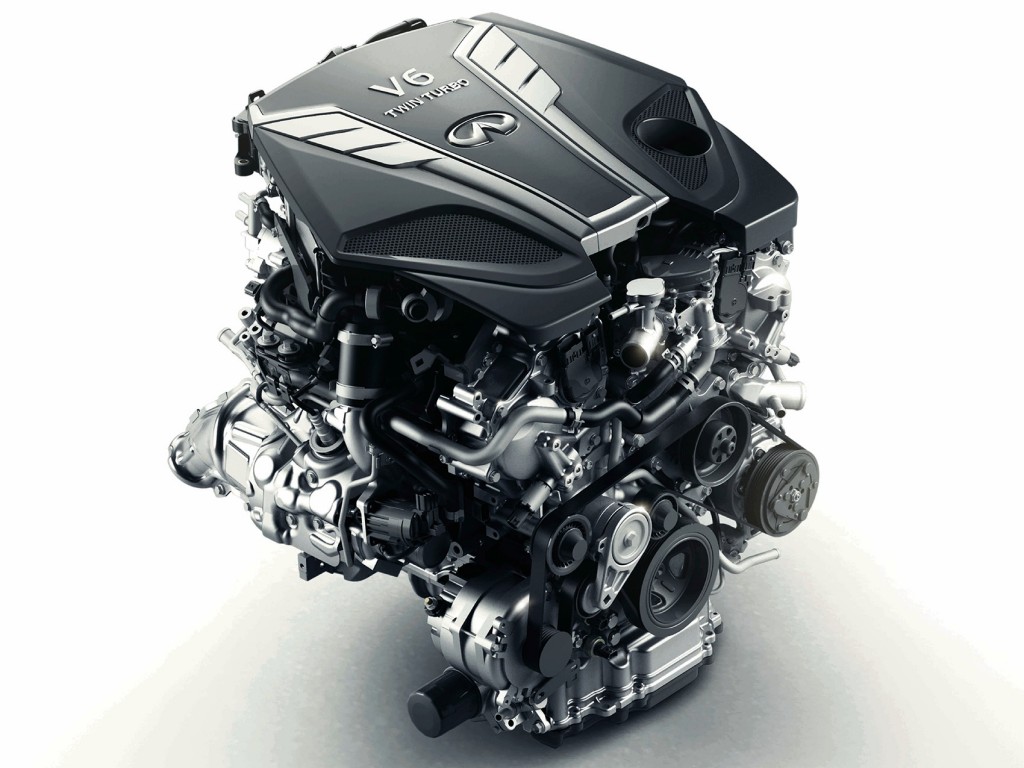 The all-new power unit is 19 percent (0.7-liter) smaller in capacity than earlier V6 engines offered by Infiniti. It builds on the company’s legacy of embracing new engineering solutions and technologies. Just as these earlier engines have always been respected for their lightweight aluminum construction and low mechanical friction – making them smooth, durable and highly responsive – the 3.0-liter V6 twin-turbo engine follows its performance-oriented predecessors with a more compact and lightweight design, while maintaining a performance focus.

Chief among the new weight-saving elements is the adoption of spray bore coating for the engine block and integrated exhaust manifold for cylinder heads. Not only does this make the engine lighter, but this also aids cooling as heat can dissipate more effectively through the aluminum alloy bore wall, a process boosted further by its physical design, which encourages faster engine heat management.

The lower weight throughout the engine contributes to greater mechanical efficiency, with lower inertia from its lightweight aluminum components, while this added efficiency adds to the drivability and overall performance of the V6 engine.

The engineers have adopted a series of innovation technologies for application in the new V6 to deliver a more engaging driving experience. Chief among these is a new direct-injection gasoline (DIG) fueling system. The high-pressure DIG system allows for more precise injection of fuel into the combustion chamber, delivering the exact amount required for smooth engine acceleration, depending on throttle position and engine speed. This system makes the new V6 the cleanest and most fuel-efficient engine of its type that Infiniti has ever offered, contributing towards the 6.7 percent improvement in fuel economy.

The advanced valve timing control allows for more precise regulation of the fuel and air mix in the combustion chamber, helping the engine to operate more efficiently and improving fuel economy under all conditions.

One of the most significant features in the all-new 3.0-liter V6 twin-turbo engine is the adoption of a new integrated exhaust manifold, built into the cylinder head, enabling engineers to position the catalytic converter closer to the exhaust point. This results in a shorter flow path for the hot exhaust gases, allowing the catalytic converter to heat up almost instantly – twice as fast as previous V6 engines – and reducing emissions from a cold start.

Moving the catalytic converter closer to the exhaust point saves weight by making the engine more compact than before. This design accounts for an 11.7- pound (5.3 kg) reduction in weight.

The new aluminum engine block has been constructed as a “square” engine, with equal cylinder bore and stroke dimensions (86.0 x 86.0 mm). As a result, the 3.0-liter V6 twin-turbo engine combines low mechanical friction and fast-revving response. Power and torque are accessed across a broader spread of mid-range engine speeds, in which drivers typically spend most of their time. The result is, the ideal balance between drivability, efficiency, and performance. 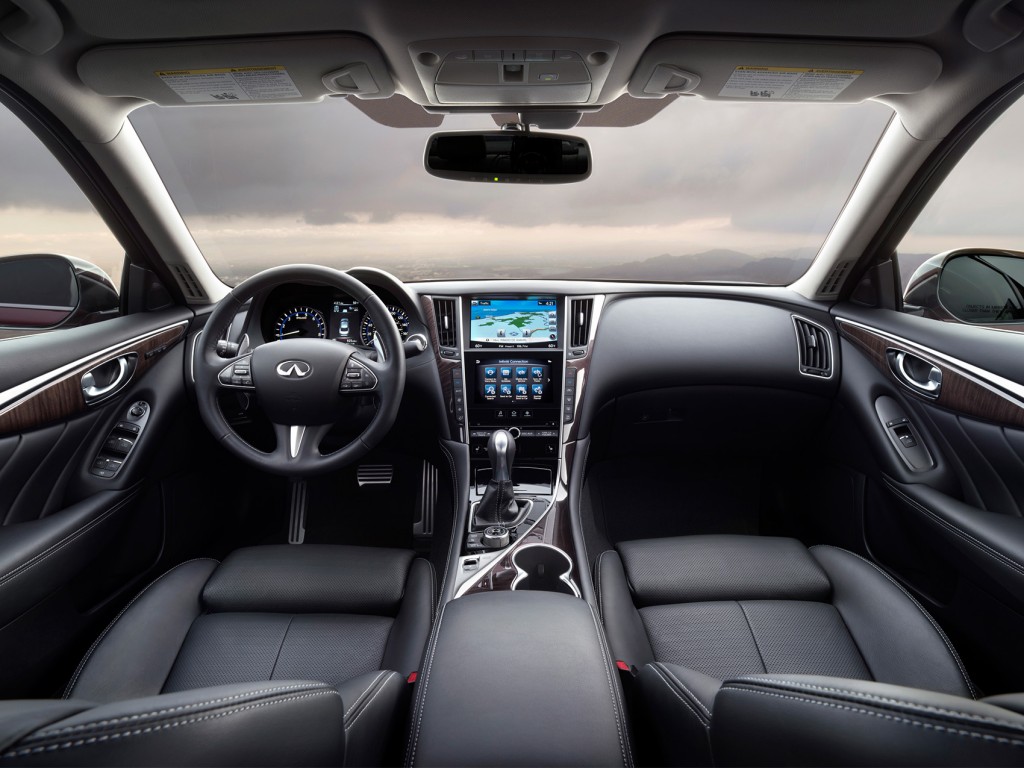 The all-new 3.0-liter twin-turbo V6 engine is due to enter production during 2016 and will be manufactured at the powertrain plant in Iwaki, Fukushima, Japan. The first application of the engine family will be in the 2016 Infiniti Q50 sports sedan, which will be in Infiniti showrooms in North America beginning in late winter.

More information about Infiniti and its industry leading technologies can be found at www.infiniti.com