Autumn marks the end of the racing season in many parts of the USA as racers begin their winter rebuilds. But in Southern California, IDRC racers and InstaFame Car Show entrants formed lines before dawn to gain entrance to the BorgWarner IDRC International Finals presented by ARP. Moderate temperatures greeted attendees on Sunday October 23, 2016, offering ideal racing conditions as the masses made their way into the venue at Auto Club Dragway in Fontana, California. The racers set up in their pits while the InstaFame contestants filed to the end of the track to coordinate and get staged into the car show. A field of over 200 racers began filtering through tech before returning to the pits in preparation for the track to go hot. Around the big tent next to the grandstands, the vendor row buzzed with activity as tents and tables were set up to display the latest and greatest must-have products. Text by Richard Fong // Photos by Stanley Yee and Aaron Eusebi 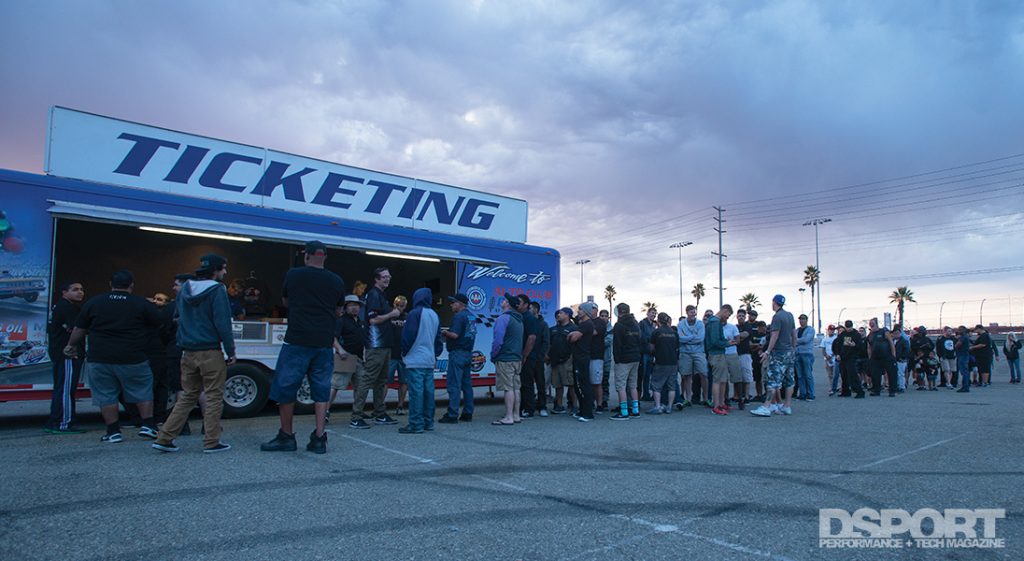 The line at ticketing started before 6:30AM as racers and show car entrants waited anxiously to enter the venue.

Quick and powerful machines staged up for their turn to tackle the tarmac of Auto Club Dragway’s racing surface.

The staging lanes were packed as racers began making their first passes of the day. There were a number of scorching passes being made that morning, especially in the Pro FWD class. The top nine qualifiers all ran in the single digits, the quickest of the group being the Darton Sleeves/NoLuck Racing Civic Coupe piloted by Jeremy Bretschneider. Bretschneider’s quickest E.T. of 8.931-seconds put him in the top qualifying spot. Right on his heels was Javier Loarca with a 9.065-second pass. Loarca had the fastest trap speed of the day with a 168.66 MPH. The quickest Pro All Motor contender in the group, Nalani Whatley, was fourth quickest in the class running a 9.495-second pass at 145.33 MPH. 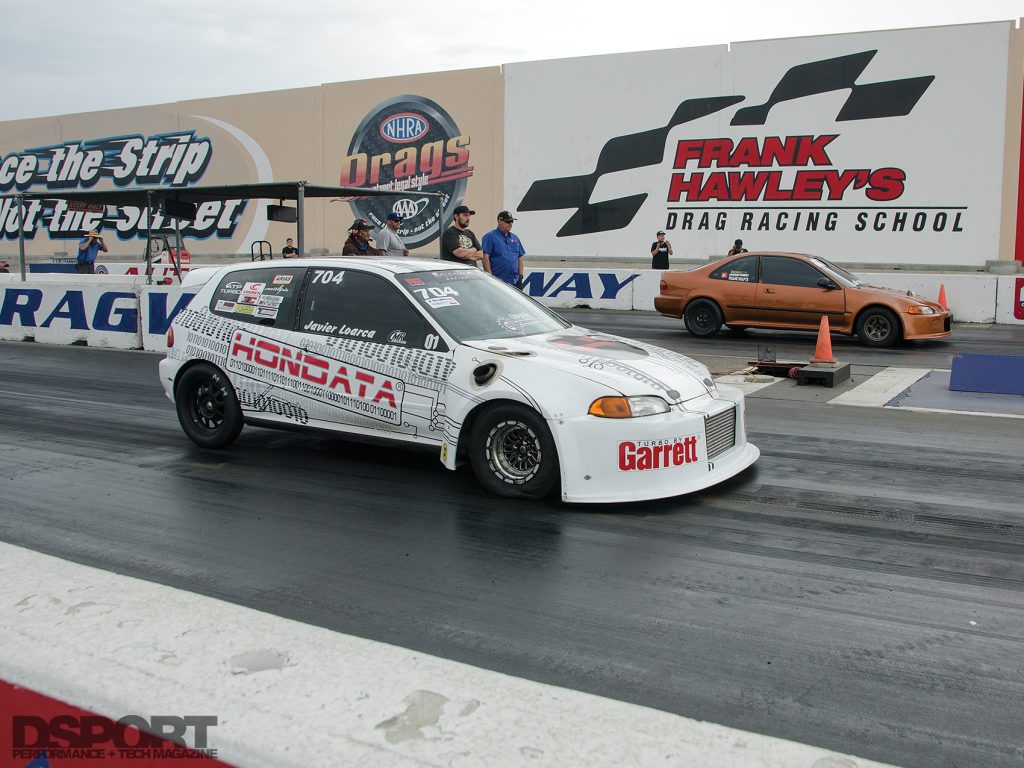 The Pro FWD class was not the only class to represent in the single digits that morning. Paul Pituch returned to compete in the Pro Turbo 10.5 class in his R35 GT-R. Pituch’s best qualifying pass of 9.235 seconds put him in the number one spot in the class. The Pro-Am All Motor class’s top qualifier, Tuk Suxi, locked down a 9.954-second pass to join the ranks of the day’s quickest drivers. 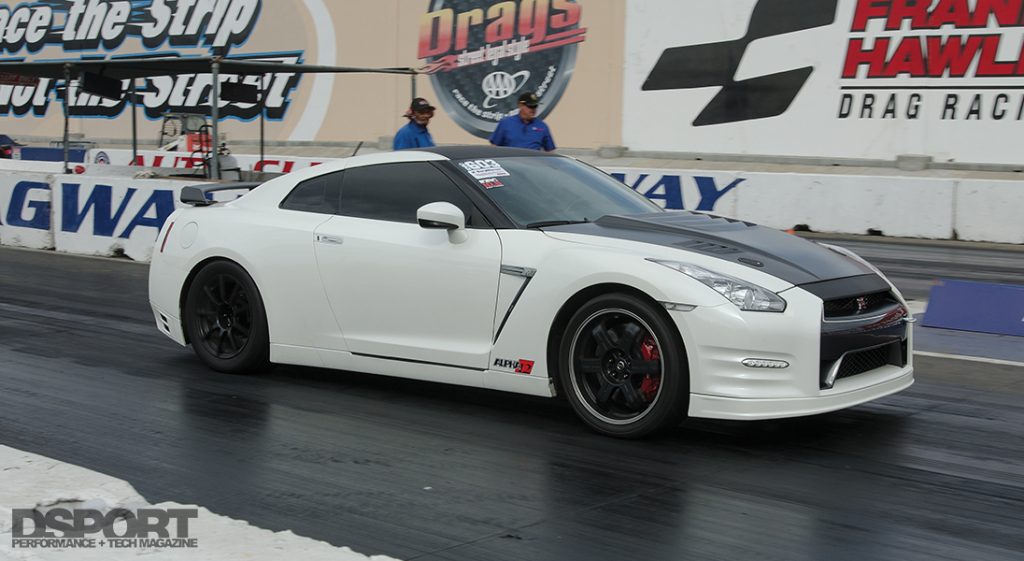 While the cool and calm weather held its pace for the better part of the day, the threatening weather conditions that everyone stared at throughout the morning decided to visit the track just as the first round of eliminations was under way. Showing no signs of letting up by sun down, the decision was made to call the race. 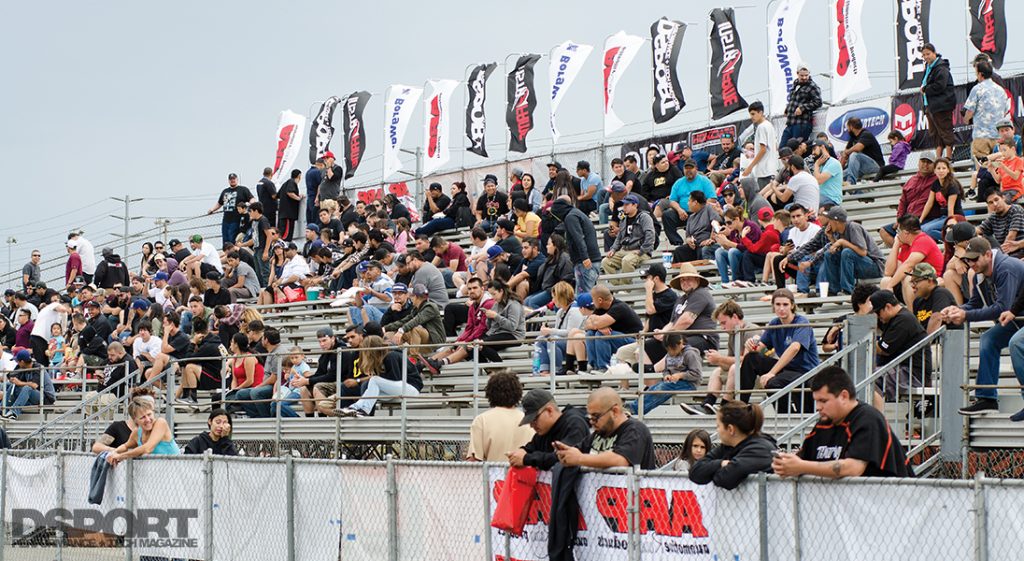 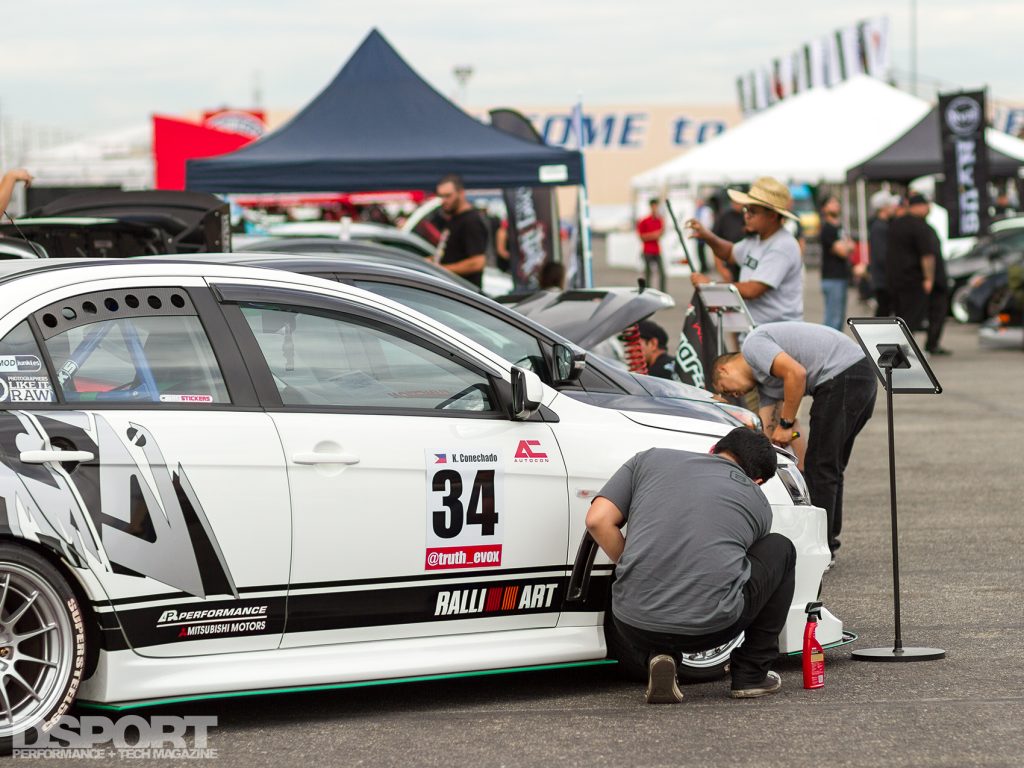 For the 2016 IDRC International Finals, the InstaFame Car Show was revised to better serve all of the show entrants. Car show participants interested in having their car judged now fell under the InstaFame Elite category, while those seeking to display their ride in the show could still do so under the standard InstaFame entry. This categorization process not only helped to expedite the judging process but also ensured that all cars in the competition received evaluation. Newly designed InstaFame trophies were also introduced at this event, along with revisions to the judged categories. 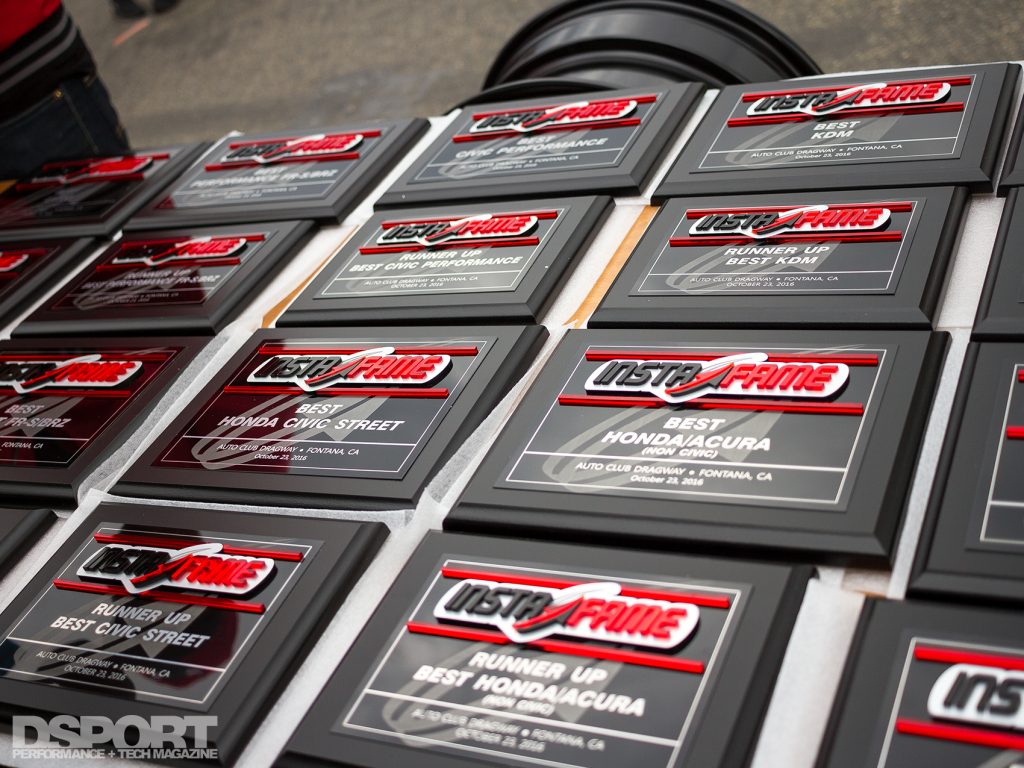 Despite the threatening weather conditions, 22 crews represented in the InstaFame Car Show with many familiar faces and vehicles in addition to some new ones as well. Once judging was completed and the scores were tallied, show participants gathered under the big tent to escape the rain and find out who won. The biggest group from the 2016 IDRC West Coast Nationals, the SD86 crew, dominated in the FR-S/BRZ category. Its members swept all four trophies designated for this one-make class. One member, Mark Cowans, not only captured the Best Performance honor but was also recognized with the coveted DSPORT Editor’s Choice Award as well. The Best Crew from the last event, Team NvUS, also fared well, collecting four more trophies to its credit. 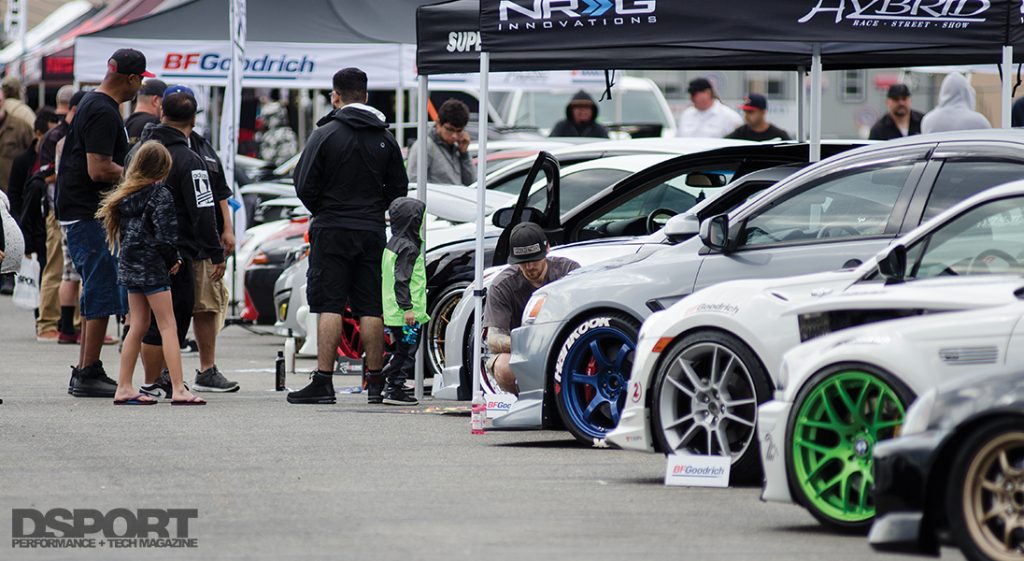 Attendance with a perfect record is no easy feat. Yet several of the entrants have yet to miss taking top honors at consecutive InstaFame Car Shows. One happens to be a domestic and the other an import. On the domestic side, Team Hybrid’s Ken Tichnor has won three consecutive “Best Domestic” trophies, as well as best of show at the 2016 InstaFame season opener. On the import side, Nom Nom Squad’s Tony Lee hasn’t missed a beat in the last four events, taking home Best Subaru each time. He also won the DSPORT Editor’s Choice Award in the Spring of 2015. An honorable mention goes out to Chau Tran, who has taken the Best Street FR-S/BRZ in back-to-back InstaFame shows, as well as the People’s Choice Award at the 2016 season opener. 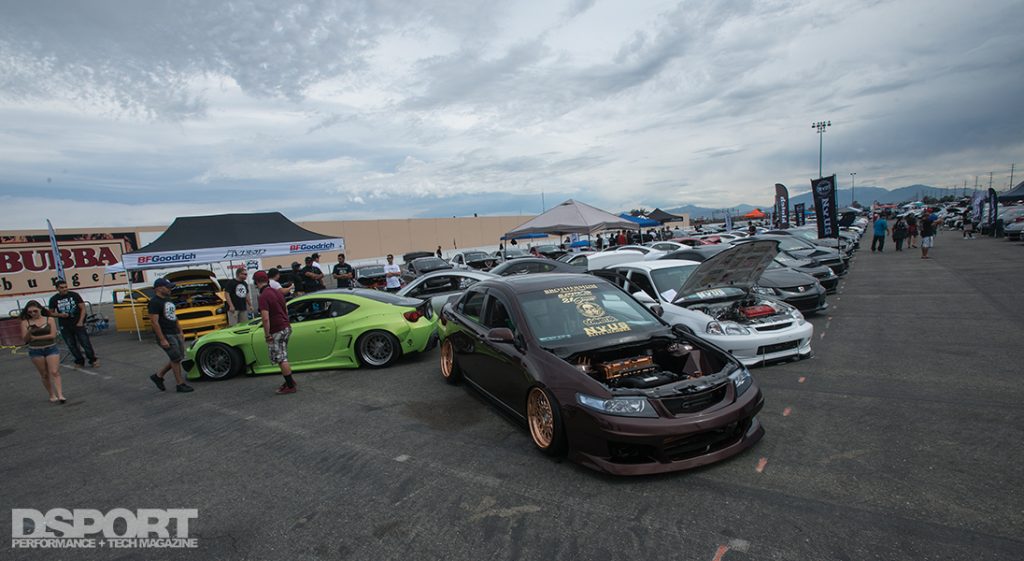 The top honor for the day went to Matthew Bibbey, whose 1991 Honda CR-X earned the Best of Show Award. At last year’s finals, Bibbey won the award for Best Old School. The biggest winner at the event also happened to have the biggest crew in the show. Team Hybrid dominated at the IDRC International Finals, collecting thirteen trophies in total. Sergio Guevara’s 2013 Nissan 370Z was among the winners, claiming both the best Nissan award as well as the People’s Choice Award. Hybrid also had the Biggest Crew at the event and was awarded the Best Crew Award by the judges. Team Hybrid’s founder and president James Lin beamed with pride at the event, as his crew is the first to ever win both of the top crew honors at a single event.

The IDRC would like to thank all of the sponsors, racers, InstaFame participants and spectators for making the 2016 season another successful one in its history. The IDRC looks forward to an exciting 2017 season, as it has already locked in the dates for four events and has plans to add two new venues as well. Catch the latest updates as the dates and locations are unveiled online at www.importdrag.com, on social media and in the pages of DSPORT. Stay tuned. The Import Drag Racing Circuit would like to extend a special word of thanks to the 2016 sponsors, including BorgWarner, ARP Fasteners, Turbo by Garrett, Motovicity Distribution, Supertech Performance, NRG Innovation, Hondata, TOMEI Powered and AEM Induction. Thanks also go out to the companies that participated in the IDRC raffle, including Nitto Tires, Klutch Wheels, AEM Intakes, AutoMeter, Canton Racing Products, CTEK Chargers, Koyorad, TOMEI Powered, Password:JDM, K1 Speed, Mechanix Wear, Fontana Nissan and EvapoRust. 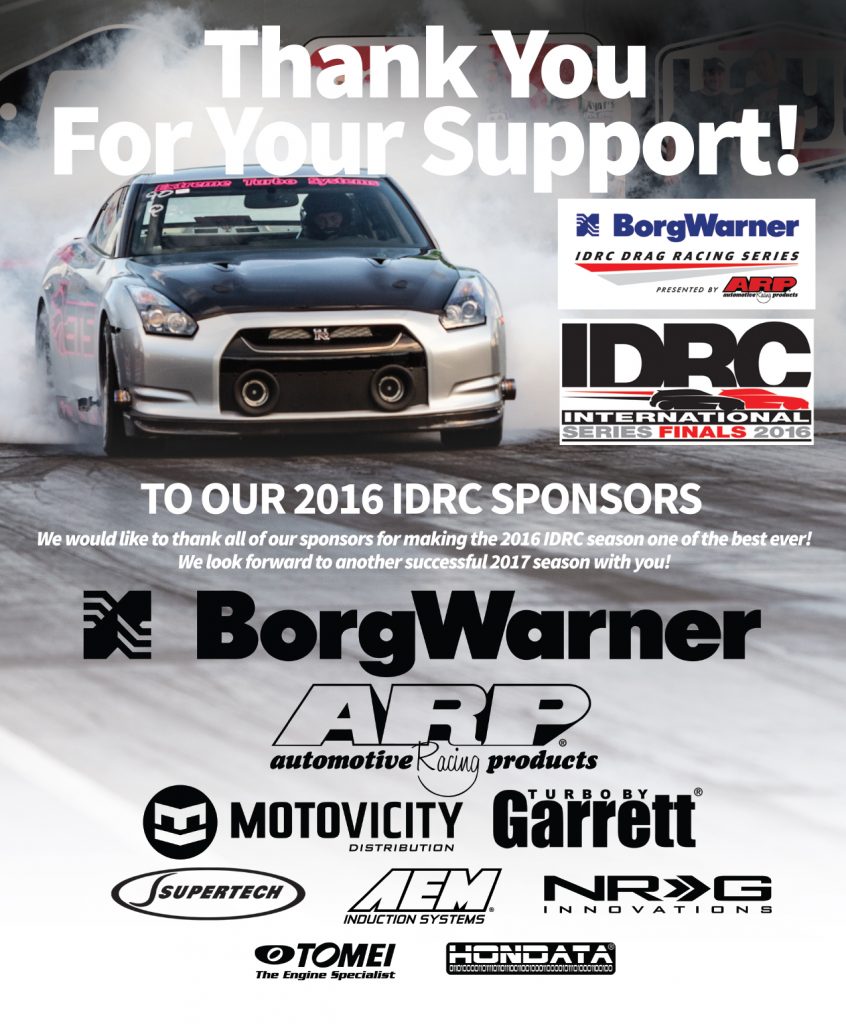 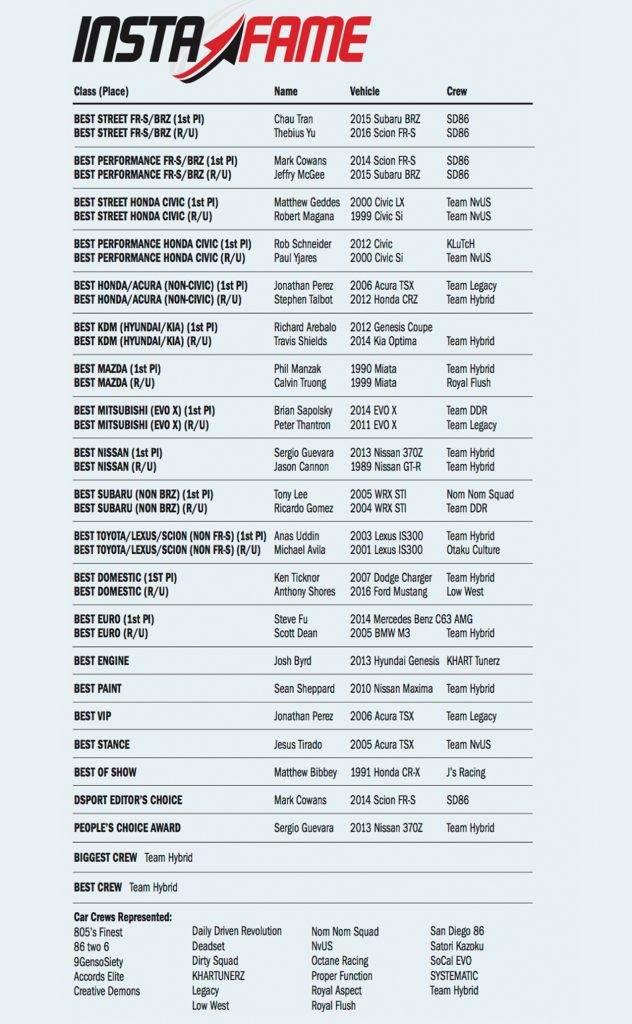