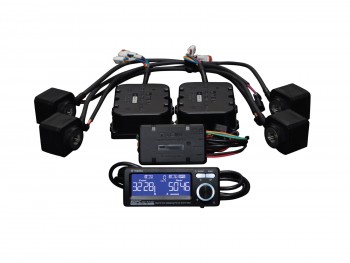 ACTIVE SUSPENSION HELPED BOLSTER THE WILLIAMS FW15C FORMULA ONE car to win the Constructor’s Championship in 1993. The concept was then banned the very next season for being an unfair advantage. While this advantageous design may not be allowed in some tiers of pro racing, the TEIN EDFC Active Pro is available for your personal street and track cars. The EDFC Active Pro turns your damping adjustable coilovers into a fully adaptive suspension based on your driving conditions. Playing on its integrated g-sensor, damping changes are made to each corner independently based on g-force loading. The included Signal Converter allows you to access your ECU’s speed signal to optimize damping setting based on vehicle speed. All settings are preprogrammed, but can be fully customized and optimized by the driver. MSRP is $634.