When a new generation of a vehicle is released you will always hear “The new chassis is XX-percent stiffer.” Instead of saying “That’s impressive,” the more common response is to simply think “So what?” While 99-percent of automotive buyers understand the advantage of more power, nearly the same percentage wouldn’t be able to tell you the advantage of having a chassis with increased torsional rigidity. In reality, significant increases in the torsional rigidity of a chassis should be a reason for celebration.

Since the days that vehicles were built on a simple ladder frame much has changed. In 1981, McLaren revolutionized Formula 1 with a carbon-fiber monocoque—the epitome of lightweight rigidity. The McLaren 12C pictured with and without front and rear frame sections take that technology to the street.

Years ago, torsional rigidity was often referred to as torsional stiffness. Both refer to the same properties of the chassis. Unfortunately, this nomenclature caused some confusion since many often use the term “stiff” to describe the unfavorable ride quality of a vehicle. In reality, increasing the torsional rigidity of a vehicle improves ride comfort quality by allowing the suspension to work more efficiently.

When you look up the definition for torsion, you’ll inevitably start getting the shaft. That is to say, they’ll talk about how torsion is the twisting of an object (usually a shaft as the example) due to an external or applied torque. When you apply a torque to a shaft the shape of the shaft, its cross-sectional area and the modulus of rigidity of its material will dictate how much it twists for a given amount of torque. Circular or round shafts will have will have a lower angle of twist in torsion than a square, all other factors being equal. A shaft that has a diameter that is double the size of another will have just 1/16th of the twist angle as the smaller diameter shaft. As for material, a material with twice the modulus of rigidity will only twist half as much. 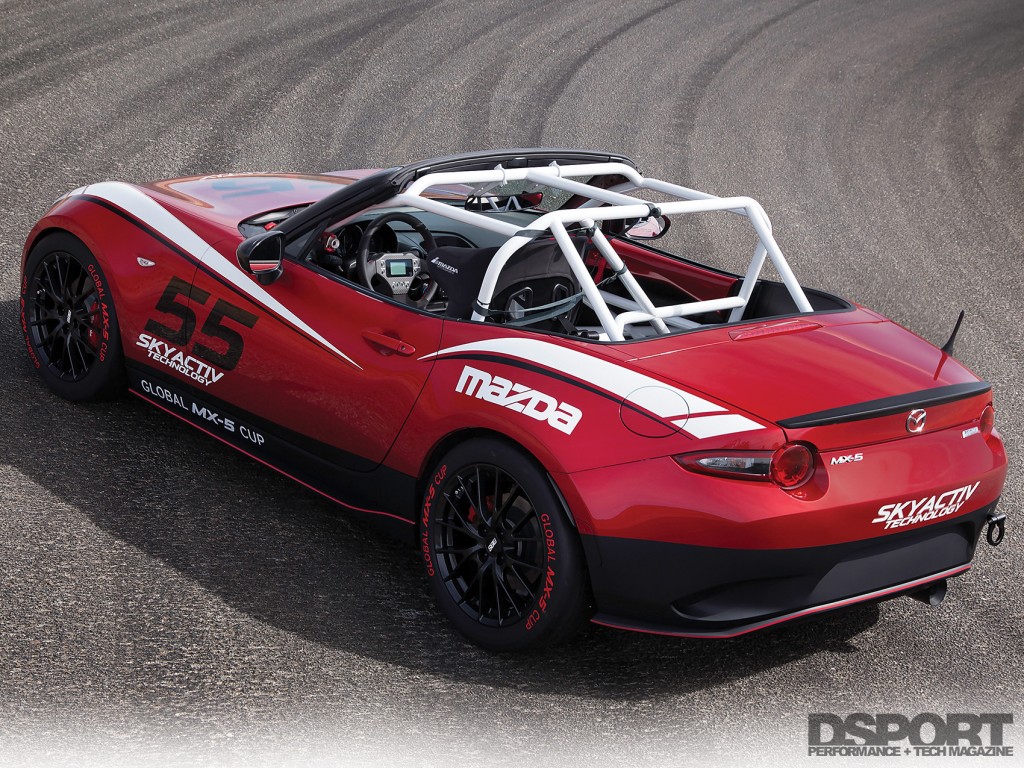 When a sanctioning body specifies a tube for a roll bar or roll cage, they will often specify the bar diameter, material and the method of welding. For example, to build an NHRA legal roll cage a 1.625” diameter bar must be used. A thicker 0.118” mild steel (10XX series) can be used or a thinner 0.083” 4130-alloy “chromoly” material can be used. According to NHRA rules, mild steel can be MIG welded but the alloy steel requires TIG welding. Using the 4130-alloy steel with the thinner wall thickness provides a 35% weight savings over the thicker mild steel. Both have comparable torsional rigidity. While all of the material is round tubing, it’s interesting to see how the diameter, wall thickness, material and welding method all influence its ultimate performance.

Suspension guru Herb Adams (author of Chassis Engineering) defined torsional rigidity (actually “stiffness” in his 1993 publication) as it applies to a vehicle’s chassis as “how much a frame will flex as it’s loaded when one front wheel is up and the other front wheel is down while the rear of the car is held level.” Herb paints a picture that is easy to see while he goes on to say, “ This condition is seen at every corner of the road, so its importance to proper handling should be obvious.” While it may have been obvious to some OEM manufacturers and racecar builders, increasing the torsional rigidity of a vehicle without significantly increasing the weight is the engineering challenge.

Fortunately, advances in computer chassis modeling, higher-strength materials, new welding techniques and superior bonding materials are allowing both OEMs and racecar builders to build vehicles that sport far more torsional rigidity than cars of the past. Whereas, a 1966 Ford Mustang coupe probably had a spec around 5,000 Nm per degree, today’s 2015 Mustang is well over 20,000 Nm/degree. What’s the high end of current automobile technology? A Bugatti Veyron claims a torsional rigidity over 60,000 Nm/deg.

Take any coupe or sedan with an impressive torsional rigidity and turn it into a convertible and you’ll be lucky to get half of what you had. Even after the factory adds weight with X-beam supports under the floor, there is still no substitute for a roof when it comes to stiffening up the chassis. A Porsche 911 (996 variety) drops from 27,000 Nm/deg to just 11,600 Nm/deg when you compare the coupe to the convertible.

(L)This is what a basic ladder frame looks like in torsion. Less rigidity means more deflection angle. (M) Adding crossbars, a rear hoop and a front bar parallel to the mains add little rigidity. (R) A X-brace will improve rigidity and similar structures are often used on convertibles. 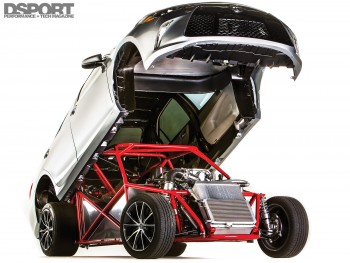 The chassis and suspension of a vehicle can be thought of as five independent sets of springs. There are the two front springs, the two rear springs and the chassis that acts as a fifth spring. If we cut a car down the middle and only look at what happens to a single spring in the front and rear along with the chassis, we are able to consider a three-spring model. When three springs are put in series, the force or load across the springs is equal. The weakest spring in the series will still deflect the most for a given load even if the other two springs are upgraded to a higher rate (stiffness). This is why some vehicles do not respond favorably to high-rate springs unless the chassis rigidity is improved first. Finally, increased torsional rigidity decreases rattles, squeaks and vibrations.

[pullquote]A TRIANGULATED FRONT STRUT TOWER BRACE THAT TIES INTO THE FIREWALL MAY IMPROVE THE TORSIONAL STIFFNESS OF THE CHASSIS ON THE ORDER[/pullquote]On the OEM side, manufacturers are turning to use higher-modulus (stiffness) steels, additional welding and the latest high-strength bonding adhesives to improve torsional rigidity. While adding torsional rigidity is easy if weight is added to a vehicle, it’s a real challenge when adding additional weight is not an option. Today’s fuel efficiency standards force OEMs to think twice before adding weight to a vehicle.

For a street car, we’ll consider solutions that can be bolted in place. When it comes to a bolt-on solution, triangles and X-designs are usually evident in the products that actually work. So first, look for solutions made of high stiffness materials that incorporate those geometries. When you find products that may actually have been engineered and manufactured to work properly, the second step is to address the chassis as three independent structures: front, center, and rear. This is the exact approach that Lexus engineers took in putting together the RC F. The front is anything up to the firewall, the middle is the firewall back to the rear seat and the rear is the back of the rear seats to the end of the vehicle. 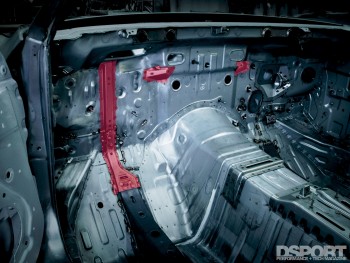 A triangulated front strut tower brace that ties into the firewall may improve the torsional stiffness of the chassis on the order of 10-percent. For example, the OEM tower brace on the 2015 Mustang convertibles adds a full 10-percent to the torsional rigidity. In contrast, a front strut tower brace that is not triangulated back to the firewall may only offer a 1- to 5-percent improvement. As for lower front bracing, braces that simply run from side to side will not do much of anything. However, braces that form an X between the two “frame rails” will improve torsional rigidity. There is often very little available for the center section of the vehicle in terms of bolt-on bracing. Harness bars that bolt to the factory belt mounts do not accomplish much. As for the rear of the vehicle, the same rules apply as the front. Strut tower braces are more effective when tied to a bulkhead (unfortunately most vehicles don’t have a fixed rear bulkhead).

If you really want to improve the rigidity of a vehicle and you have no objections to adding a roll cage, you’ll be stoked with the results. Even street cars that add a weld-in roll bar or roll cage can see dramatic improvements in ride quality, handling and even 60-foot times. However, not all bars and cages are created equal. If the main hoop simply has one horizontal crossbar, you won’t see much of a gain. Add a pair of bars down to the transmission tunnel area from where the crossbar intersects with the main hoop and you have magic.

If you have the opportunity to strip off the paint of the vehicle you may also want to explore themerits of stitch welding. By stitch welding overlapping panels that are only factory spot welded (or worse yet not bonded together), chassis rigidity can be increased. One of the most critical areas is the firewall (which is essentially a shear plate when the chassis is in torsion). Stitch welding this area can show the best increases in rigidity.

(L) When a cage is added chassis rigidity will be increased. (M) Adding a few key bars to add triangulation can dramatically improve rigidity. Unfortunately, an engine or other component may be in the way. (R) Sheer panels can take the place of key bars to add rigidity.

What about riveting in lieu of stitch welding? When the proper rivets are used and the right number installed, one may be able to get 50 to 70-percent of the strength of a weld. It is a tedious and time-consuming task that is really only advisable if someone has an abundance of time and no ability to weld. Aircraft quality rivets that are the blind-style can be used to help bond layers of sheet metal together on an automotive application. This style of rivet (that is easy to install and doesn’t require access behind the panel) will only have about half the strength of a traditional rivet of the same size. As a result, the rule of thumb is to use five blind rivets in the space that you’d typically use three standard rivets. For this style of rivet to be effective, you need to be sure that you are using the proper material and that you are installing a significant number of these rivets.

High-strength rivets are generally available in 18-8 stainless steel, zinc-plated steel and aluminum. The respective shear strength would be 1,650, 1,050 or 700 pounds force per rivet. The cost is considerably different as stainless checks in at about $1.60 per rivet, $0.40 per rivet for steel or $0.25 per river for aluminum. At 16 rivets per foot, you’ll be spending about $25 per foot in stainless, $6.40 per foot in steel or $4.00 per foot in aluminum.

Designing and building a chassis with maximum torsional rigidity and minimum weight is the desire of every chassis engineer. Advances in materials and manufacturing have allowed automakers to make vehicles that offer four to 10 times the chassis rigidity of cars built 30 years ago. While we cannot always afford the best chassis as a starting point, there are bolt-on and weld-in solutions for significantly increasing the chassis rigidity of the vehicle. In the coming months, we’ll demonstrate how to measure and gauge improvements to the torsional rigidity of a chassis on a future project car build