An LS engine swap usually provides double or triple the displacement of the four or six-cylinder engine it replaces. All other factors being equal, more displacement translates into more torque and horsepower. While a good number of LS swaps are done with junkyard parts on a budget, choosing the right mix of aftermarket parts will translate into more performance, higher reliability, and a lower total cost in the long run. Since all engine projects start with the block, DSPORT will outline the pros and cons of building an LS engine with an OEM or aftermarket block. Specifically, we will compare an LQ9 LS engine to the three offerings from Dart Machinery Inc. Before we dive into the blocks, let’s try to answer the age old question of “how fast do you want to go?”

Text by Michael Ferrara // Photos by Joe Singleton and Staff 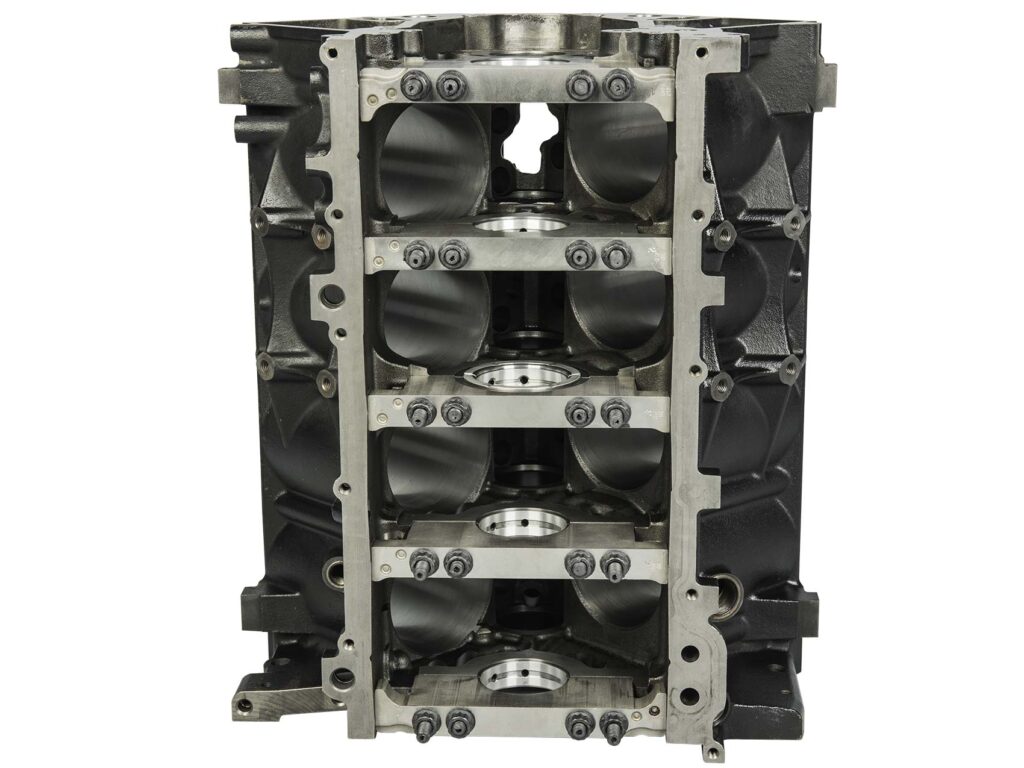 What exactly are you trying to do? This is a question you should ask yourself before embarking on the LS engine adventure. The other two questions should be “how much do I want to spend?” and “how much can I really spend?” The balance of performance and budget is the hardest part of any engine swap or build. However, choices that save a few bucks today that cost thousands of dollars later are what can be avoided with some knowledge. Whether you are planning a junkyard dog build or a build of a lifetime, making the right choices will lead to a much better experience. Let’s take a look at some of decisions that need to be made on the road to LS power. First stop, the block. 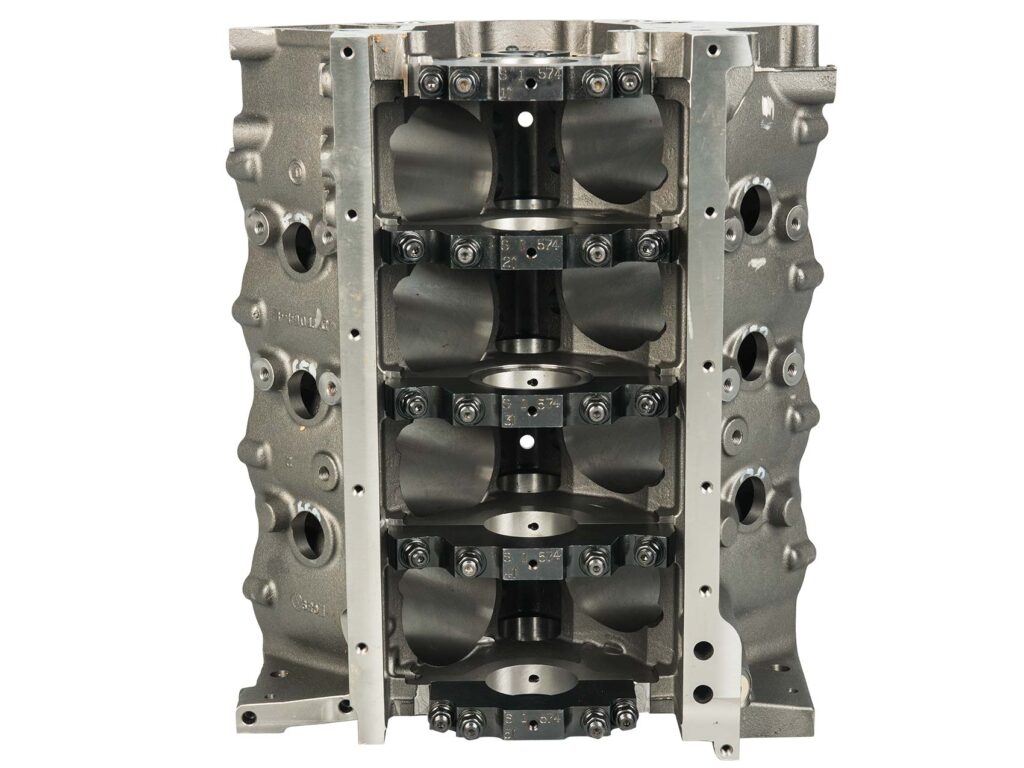 LS engines have been offered with both cast-iron and aluminum engine blocks from both the factory and the aftermarket. Cast-iron blocks were fitted into truck and SUV applications by the factory and cast-iron aftermarket blocks are the preferred choice of high-power/high-load forced-induction applications. Cast-iron blocks offer the advantage of simply being made from a material that has a higher compressive strength than aluminum. Since both the block and the cylinders are made from the same material, there are no issues resulting from the differences in expansion rate between the block and the cylinder. That’s the good news about cast-iron LS blocks. The bad news is that the cast-iron block weighs about twice the aluminum block. Hence, going cast-iron is going to add an additional 110 pounds to the end of the vehicle where it is placed versus the aluminum option. 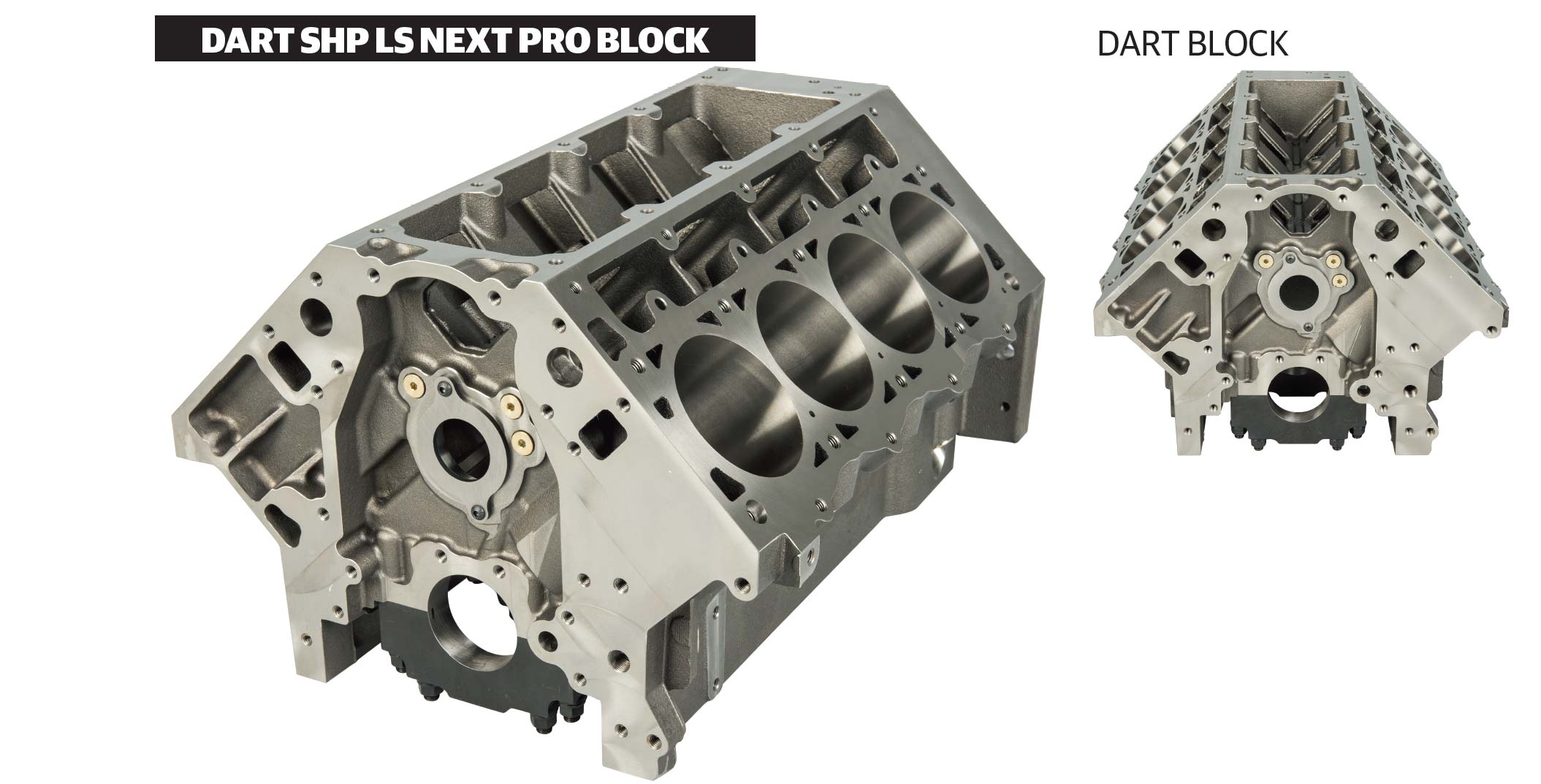 With a street price just over $2,800, the DART SHP LS NEXT PRO cast-iron block represents the next level of LS engine performance. Significant strength and reliability improvements with the ability to go to 454 cubic inches (7.4-liters). That is enough displacement to spool just about any pair of turbos that you can fit under a hood. 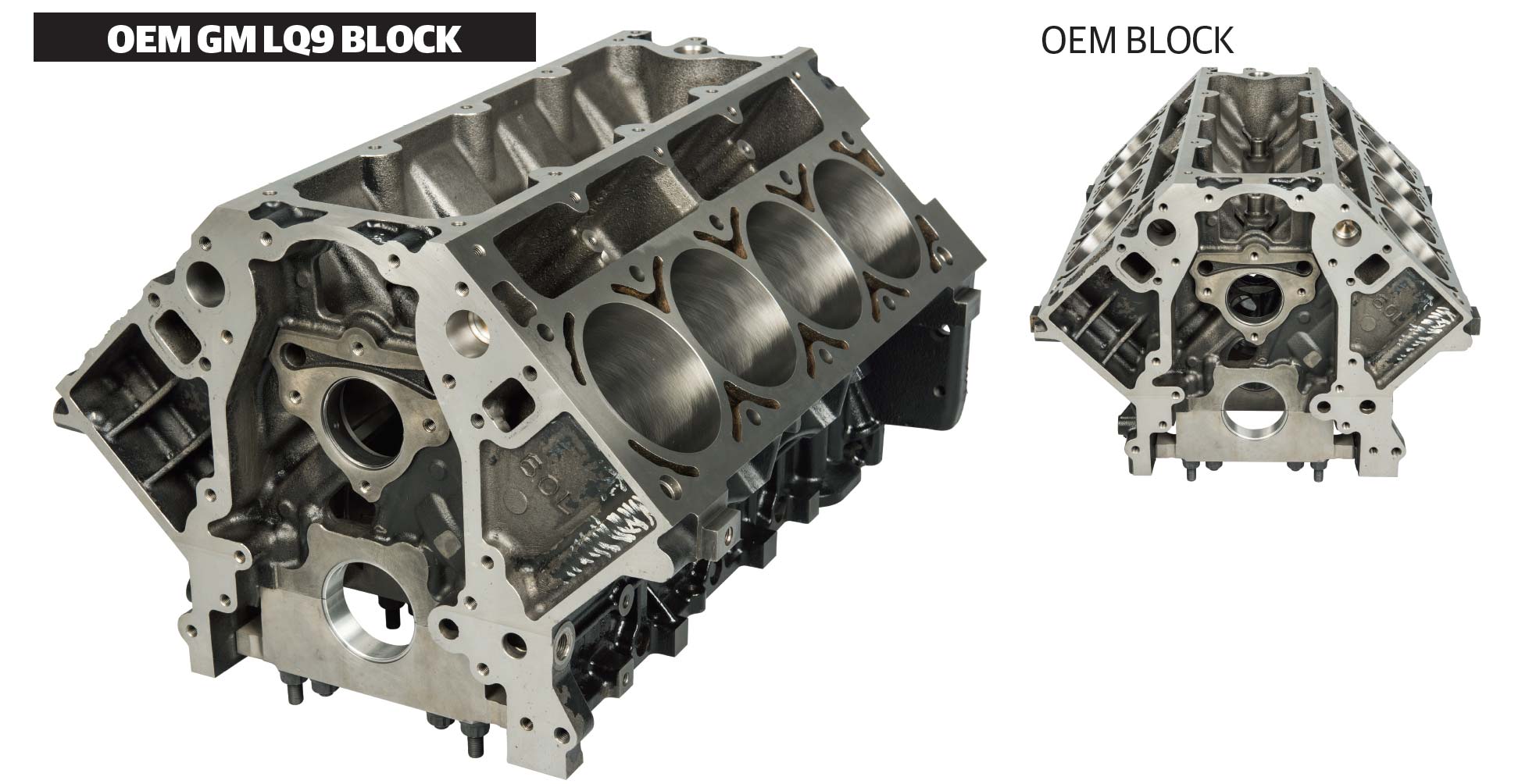 The LQ9 is the best cast-iron LS engine to build for boost. Ours was still running strong after 210,000 miles in our Project BLT Escalade. In addition to the cost of the used block, you’ll spend about $1,000 more at the machine shop than starting with a new DART SHP LS NEXT PRO block. Factoring that, the $1,800 additional for the DART is a steal considering the improvements.

For those that place little value on their personal time or have budgets that are thinner than a shoelace, do your research of the OEM LS engine offerings, decide your target and budget, get a warranty and cross your fingers that you pick a winner. Taking an engine directly from the junkyard to your engine compartment is a bit like a round of Russian Roulette where there is only one empty chamber. You get lucky about 1 out of 6 times while the other 5 out of 6 will suffer. To ensure that the engine won’t have to come out after the effort of getting it in, a full teardown and replacement of some of the essentials (i.e. oil pump, lifters, gaskets) is a must. After some reasoning, many conclude that a full rebuild is probably the best way to go. For those going that route, putting the money into the correct block (OEM or aftermarket) is a must.

Where the factory deck surface of the LQ9 has large cooling slots, the DART SHP LS NEXT PRO optimizes the size for more deck surface area. It’s also a lot thicker. The DART block also allows for 6-bolt per cylinder head (LSX Style) and up to 1/2-inch head studs for the serious boost applications.

OEM LS engine blocks, in both aluminum and cast-iron, have much lower displacement and power-handling capabilities than any of the three levels of aftermarket LS blocks available from DART. For example, the LQ9 cast-iron block that was original equipment on our Project Budget Luxury Tow Escalade is limited to a stroke of about 3.75-inch (some will tell you 4.00-inch but it’s not advisable due to the LQ9’s short cylinder length) and a bore of 4.030-inch. As a result, you could spend the money for a stroker crank, rods and stroker pistons to get a 6,271cc (383 cubic inch) engine at the end of the day. That is a little over a 300 or 0.3-liter increase, which will increase the torque on the order of 5-percent. With an aftermarket DART SHP LS NEXT PRO block, stroke can be increased to 4.1-inches and bore to 4.185-inches. That bore and stroke ends up with a displacement of 7,438.7cc (454 cubic inches) or 1,471.8cc larger than the original LQ9 6.0L. That represents nearly a 25-percent increase in displacement which translates into a 25-percent increase in torque. The displacement increase over a 6.0L LS engine is nearly equal to the displacement of a Honda 1.5-liter engine. If you want the maximum displacement out of the LS swap that will be filling your engine bay, going to an aftermarket DART offering will be a must. DART designed its LS engine blocks to have extended skirts to make longer strokes possible while still having enough cylinder length to allow the piston skirts to stabilize the pistons. In addition, DART also has cast the cylinder walls significantly thicker and in some cases with a superior strength material (DART SHP LS PRO NEXT). 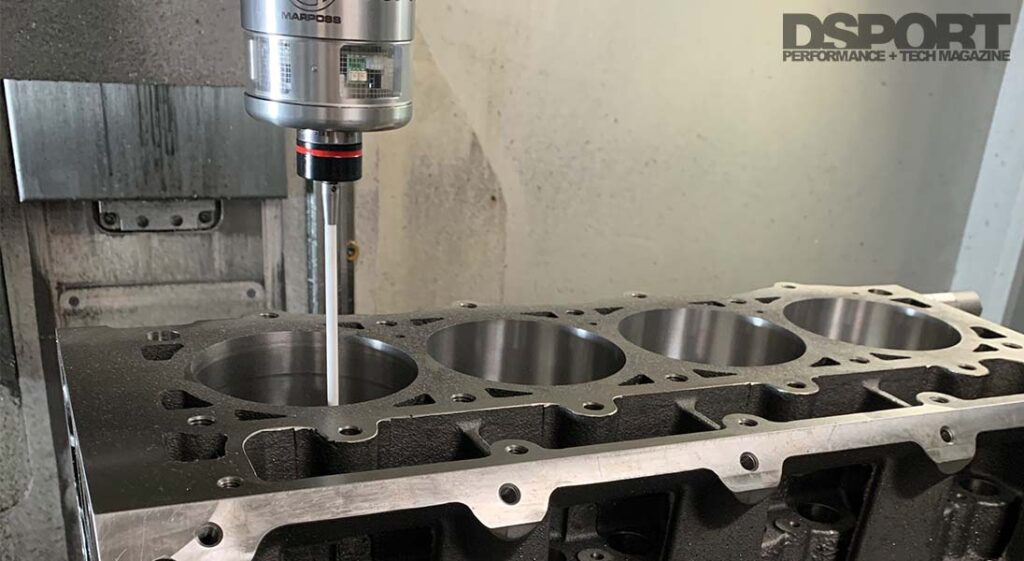 Unlike the OEM LQ9 LS engine, the lifter valley of the engine is windowed so that inspection of lifters can easily be made. A Gen-IV (2008-up) lifter valley cover and gasket is needed. If you started with a Gen-III, like us, you will need to get the Gen-IV knock sensors, and conversion harness too.

DART introduced its LS NEXT engine block in 2013 and has since added the SHP LS NEXT and SHP LS NEXT PRO to its LS-based aftermarket block lineup. In addition to being able to support increased displacement, all DART LS Next (LS NEXT, SHP LS NEXT and SHP LS NEXT PRO) blocks have features that increase both power handling and reliability. All DART LS Next blocks have a main-priority oiling system, four-bolt billet steel main caps, improved windage control, extended length cylinders, optimized cooling channels, blind head bolt holes, thicker deck surfaces, thicker cylinder walls and the ability to use 6-bolt per cylinder LSX style cylinder heads. The additional two bolts per cylinder are perfect for those planning a big-power boosted application. The priority main oiling system sends oil to the main bearings first and uses a stepped main galley to equalize the pressure and volume of oil being sent to each main. The splayed 4-bolt steel main caps match the strength of the 6-bolt factory setup but allow for much improved windage control. Optimized cooling channels help to strengthen the deck surface which is thicker than OEM while thicker than OEM cylinder walls provide a significant strength boost. Cylinders have been lengthened by 0.375-inch to allow for stroker builds that still keep enough piston in the cylinder. 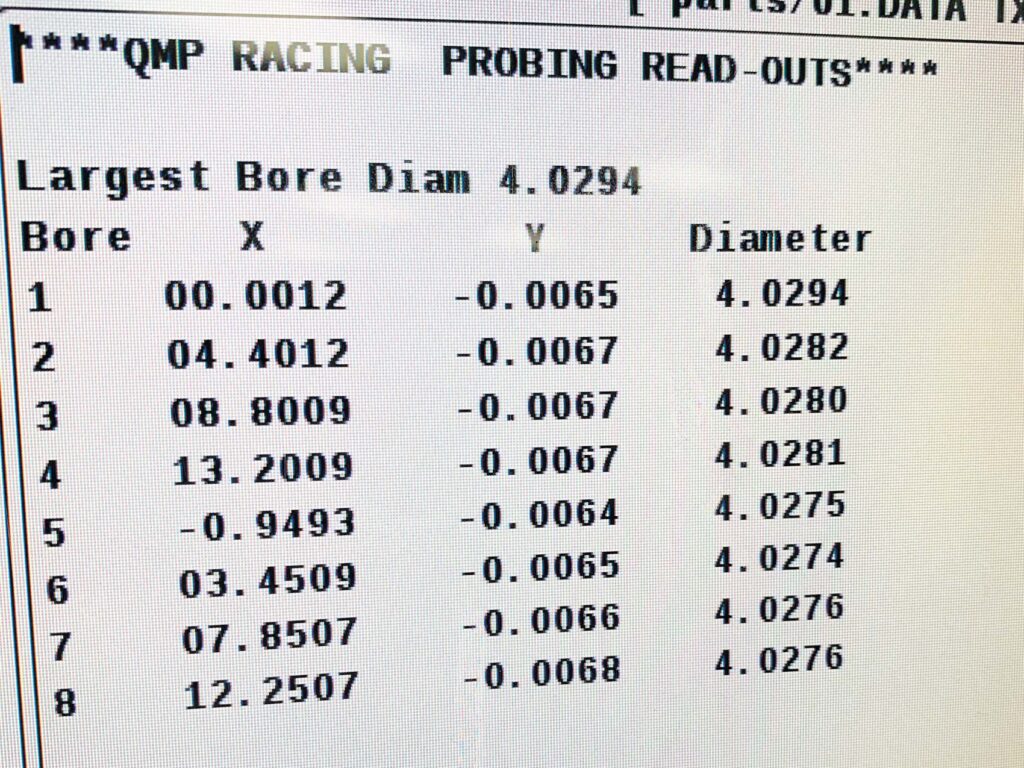 We decided to do a little offset boring of the cylinders to move the rod angle to a better advantage on the power stroke. All cylinders on each back are now +/-0.0002” or +/-5 microns of each other and to a 4.4000” bore spacing.

The original DART LS Next design has a skirtless design that means the oil pan, oil filter and some accessories are not fully compatible, so adapters or aftermarket parts are needed. The SHP LS NEXT is a skirted design like the OEM LS engines and as such is compatible with OEM components. The block mostly supports Gen-III OEM LS parts but also requires some Gen-IV OEM LS Parts (front timing cover, knock sensors, lifter valley cover). The DART SHP LS NEXT PRO is cast in a superior grade of cast-iron that has a higher hardness than any of the other DART LS NEXT engine blocks. DART claims a hardness of 220HB (about 538 on Leeb scale). We tested the DART LS NEXT PRO engine block at 18 point and came up with that exact average. That is a really high number for a “green” engine block that was only cast months ago. For comparison, the 15 year-old LQ9 block from our Escalade that had over 200,000 miles of heat cycles checked in at 210 (526 Leeb). Once the DART LS NEXT PRO gets some age hardening from use, we would not be surprised to see its hardness raise to the 230-to-240HB range. The PRO edition also features upgraded ARP main studs as standard. 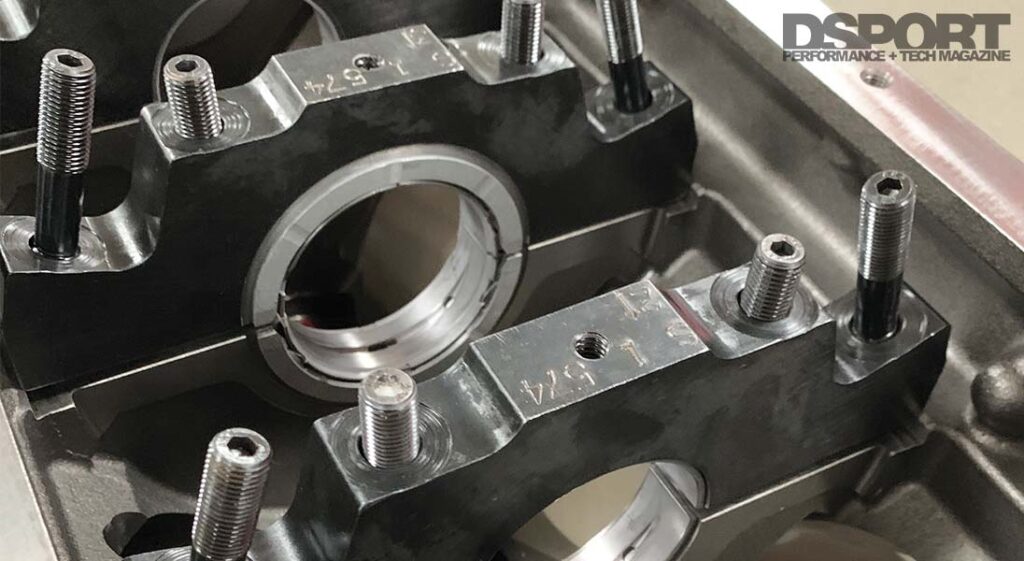 The DART SHP LS NEXT PRO block incorporates splayed main caps on the #2, #3 and #4 mains. The splayed configuration has the advantage of reaching material that is further away from where the two center main bolts thread. In the case of this block, it was engineered to have extra material in the rail area and skirt area to support the angled studs. 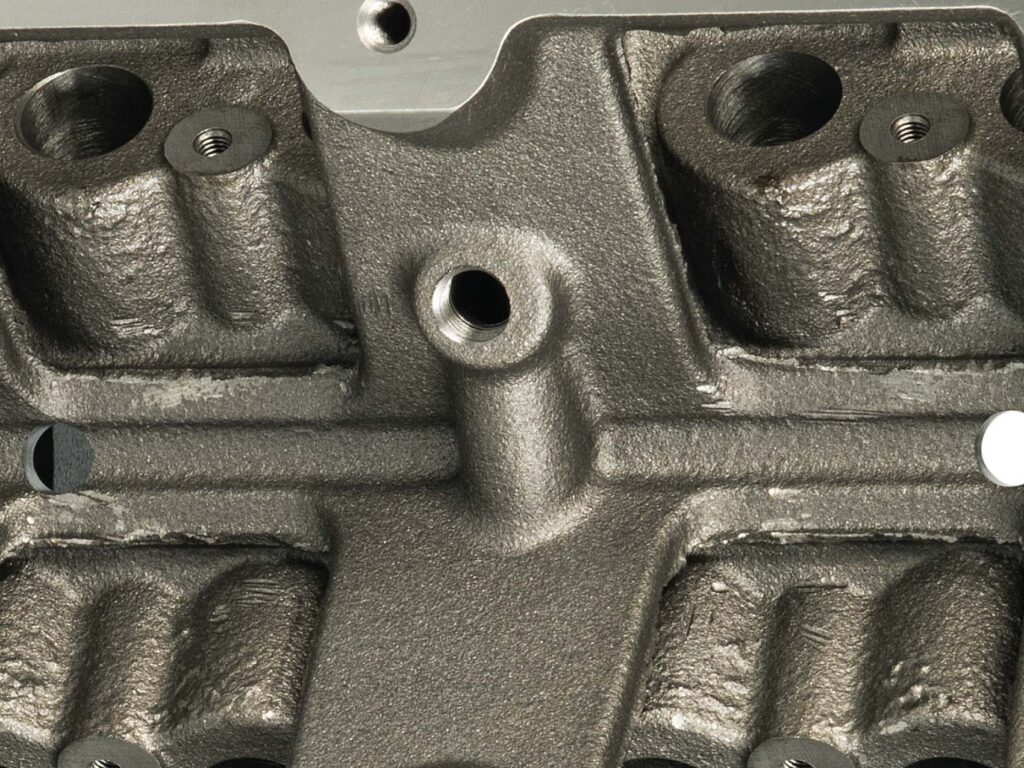 DART revised the oiling system from standard LS to priority main oiling in its design. Instead of feeding the lifters first and then the main bearings, the mains get oil first. The amount of oil sent to the lifters can be controlled by changing the size of an orifice in a plug set just below this 1/4” NPT threaded hole. DART also used PRO-STOCK technology in sizing the main oil galley at different stepped diameters to equalize the flow and pressure to each main.

DART’s SHP LS Next has a street price of about $2,400. The SHP LS PRO is $2,825 for the bare block. Even though we didn’t need the PRO’s additional power handling, the additional $425 is a bargain considering you get the superior material and ARP main studs as standard. A new LQ9 bare block from GM performance checks in just under the $2,000 mark. For the additional $825 versus this option, the DART SHP LS PRO is a hands down winner. When considering how much machine work is required to get an LQ9 to perform at its best, it’s easy to put close to $1,000 of machine work into a used block for line boring of the main, line boring of the cam bore, cylinder boring and decking. Still, even the best machine work won’t be able to take an OEM LS engine block to the performance levels possible with a DART LS NEXT platform.