You finally get back your valve cover from the powder coater with the sick new finish that sets off your engine compartment. Days later, your engine has spun a rod bearing and needs to be rebuilt. Can these seemingly unrelated events be connected? Can a simple cosmetic upgrade kill an engine? Yes, it can. Unfortunately, there are several seemingly innocent upgrades, simple mistakes and common missteps that can lead to a dumb way for your engine to die. So that your engine has the chance to die an honorable death, let’s become familiar with the dumb ways an engine can die. 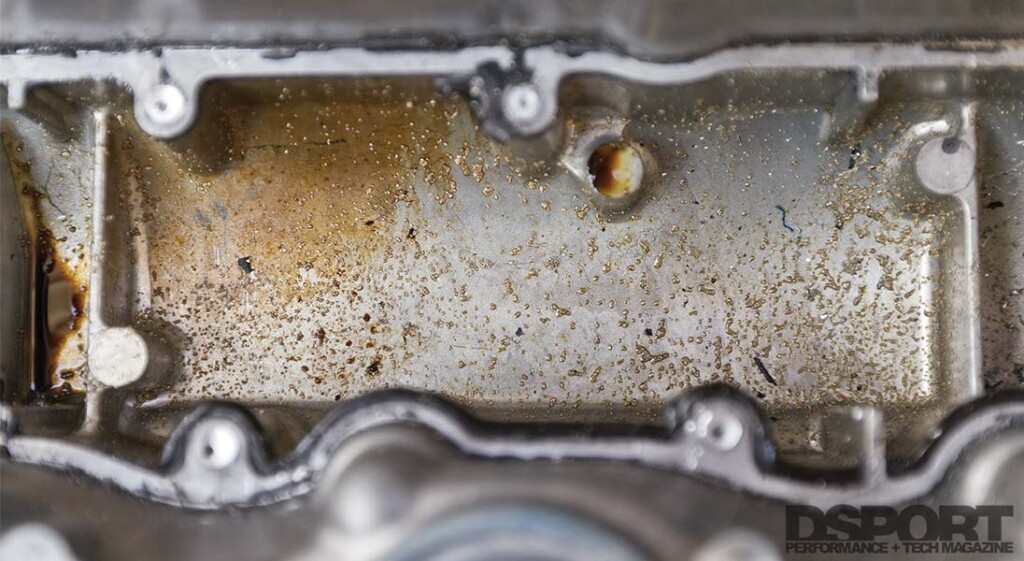 Former Feature Editor Richard Fong’s SR20DET engine was a victim of a powder-coated valve cover that destroyed his engine.

A few years back, the world lost a great comedian, Joan Rivers, and Donda West (Kanye’s Mother) to complications arising during cosmetic surgery. Unfortunately, your engine can also become a victim of a cosmetic surgery mishap. Many companies that perform powder coating use incorrect prep procedures for automotive parts. Any engine part that comes in contact with the crankcase or engine oil should only be cleaned and prep with water soluble abrasives (i.e. baking soda) or chemicals. When valve covers or cylinder heads are sand or glass bead blasted, the blasting media gets either embedded to the top layer of the material or gets stuck inside of the component being blasted. With valve covers, (the most common perpetrator) the blasting media is often trapped in baffles that are rivetted to the underside of the valve cover. The valve cover may appear clean, but there could be a ½-cup of material packed up under a baffle in the valve cover. After minutes or hours of running the vehicle, that ½-cup of sand or glass beads is now getting circulated through your entire engine. Main and rod bearings are torn to pieces while filters get clogged with debris. Oil flow and pressure drops and before some realize, the engine is a victim of a dumb way to die. 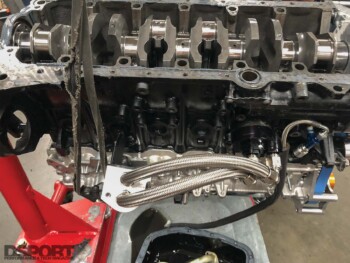 Purchasing a remote mounted oil filter kit seems like a great investment, especially if you own a vehicle that has its oil filter positioned in a challenging space. R32, R33 and R34 GT-Rs are among those vehicles where the oil filter position gave little consideration to access. When a high-quality remote oil filter kit is properly installed with the right oil filter, changing oil can go from a major hassle to a welcomed experience. Unfortunately, making the mistake of crossing the lines can lead to a situation where oil circulation is completely cut off. In some cases, the location of the oil pressure sensor can still show that oil pressure is adequate or even high, but the one valve in the oil filter prevents the flow from running backwards in the system. We recently witnessed one racer that purchased a brand-new engine and a remote-mount oil filter kit. Instead of reading the directions, he installed the hoses to have the “in” port on the adapter go into the “in” port on the remote mount while the “outs” were also matched. In reality, the “in” ports needed to be paired with the “out” ports. Since the oil pressure sensor was located before the oil filter, high oil pressure was being shown on the dash so no issue was expected until the engine seized a few passes later on the dyno. Because many remote oil filter mounts are made overseas and may come with poorly written or no instructions, the simple rule of thumb is to make sure the plumbing directs the flow from the center of the adapter to the center of the remote mount. The other hose will connect the remaining open ports on each end.

While having no oil in an engine seems like a mistake so dumb it could never be made, it still happens. Some make the mistake because no one made them aware that the engine oil was drained. This usually occurs in a shop environment where someone starts an oil change and fails to complete it. Another person arrives and needs to move the car with no oil off a lift or out of the way and an engine becomes a victim of a dumb way to die. The lesson here is to never start an oil change unless you have time and parts to finish it. 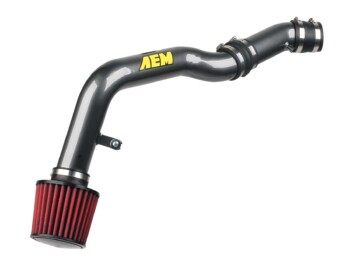 In the days when Hondas ruled the earth, the cold-air intake system that positioned the air filter low in the front bumper seemed to be on nearly every car. This position provided a solid stream of cold air for the engine to ingest to help it produce maximum power. Unfortunately, this position also allowed an engine to ingest water if the vehicle went through a large enough puddle where the air filter became completely submerged. When this occurred, the engine could potentially gulp enough water to hydrolock the engine. The hydrolock would occur when a volume of water bigger than the clearance volume of the cylinder was gulped during the intake stroke. As the piston would come up from bottom dead center (BDC) to compress what was supposed to be air and fuel, the engine would encounter a situation where something would have to give as the water was incompressible. The result was usually bent rods and sometimes a cracked cylinder or two. Eventually, the aftermarket would offer valves that prevented the water from going into the engine on cold air induction systems. 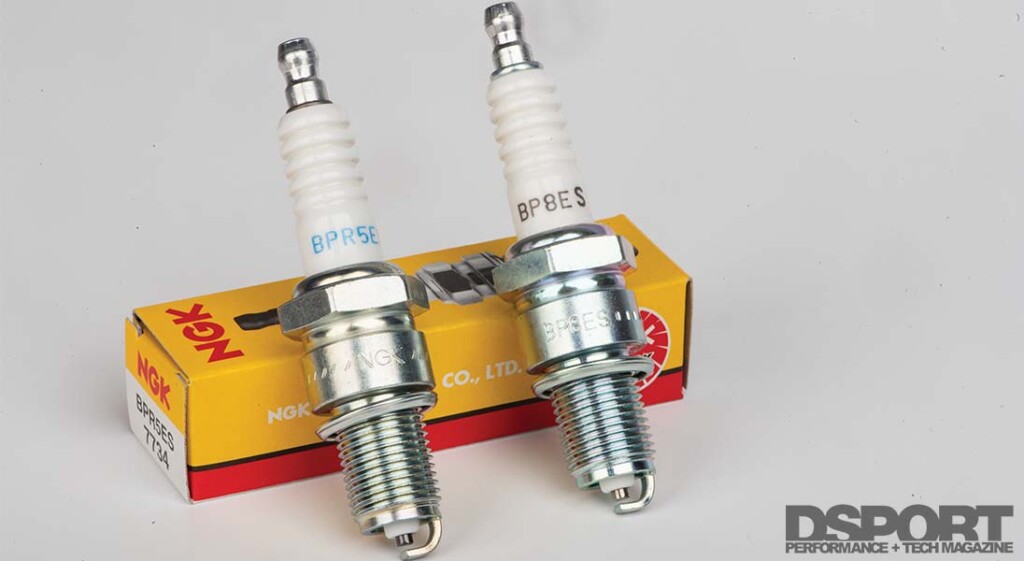 One of the most popular brands of spark plug, NGK, uses an identification method for the spark plugs heat range which can be confusion for some (especially if they are new to the NGK brand). While other manufactures identify a colder heat range spark plug with a lower number, moving to a lower number NGK spark plug results in ending up with a hotter spark plug. For example, while someone (even professionals on major racing teams) may think a “5” heat range BPR5ES spark plug is two steps colder than a “7” heat range BPR7ES spark plug, it is actually two steps hotter! Running a spark plug that is too hot can quickly lead to preignition, melted electrodes and another dumb way for your engine to die. 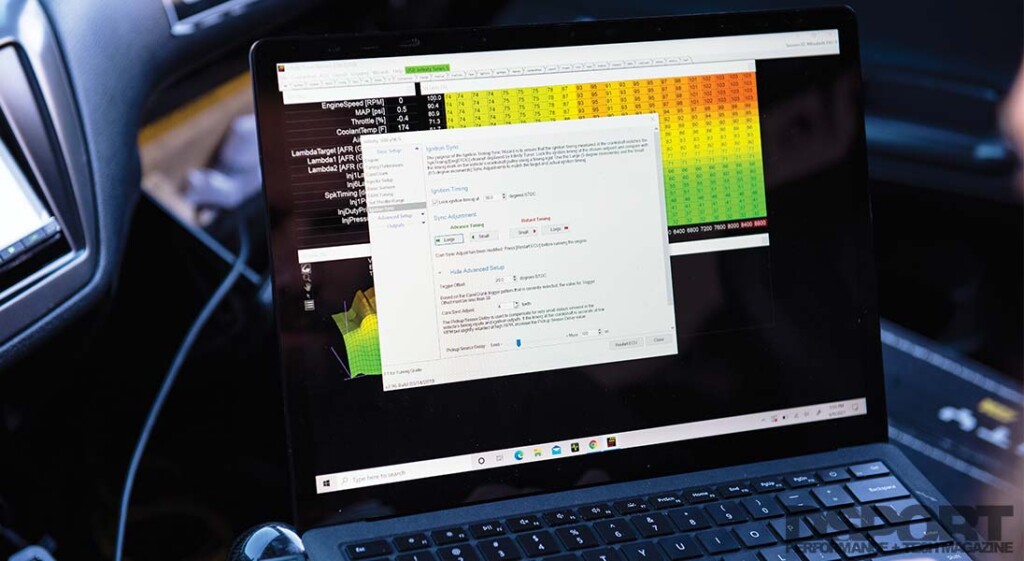 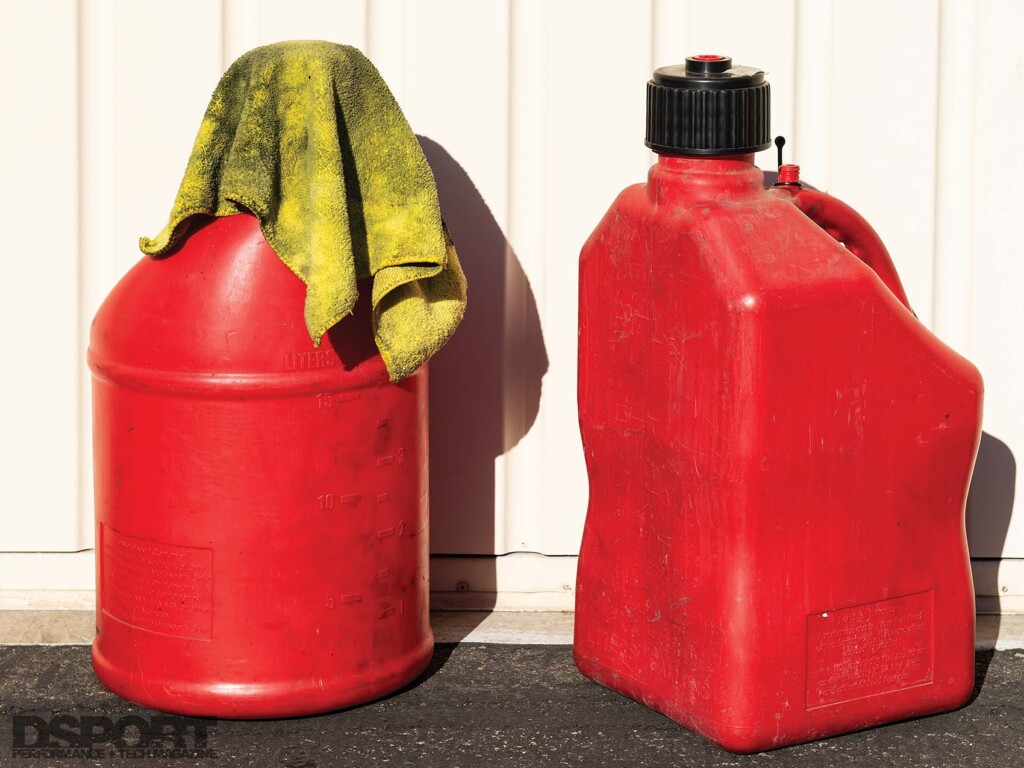 If your fuel came from containers left out in the elements for months, you will have issues. Always use fresh fuel in your engine. If your fuel has sat in your tank for more than a couple months, replace it, especially if it’s E85.

With few exceptions, old fuel is bad fuel. If your vehicle has pump gas that is more than a few weeks old, consider replacing it before engine break-in or tuning. E85 has an even shorter lifespan while methanol should never be left in a fuel system. Old fuels can attract moisture or change chemical compositions. Octane ratings can drop too. 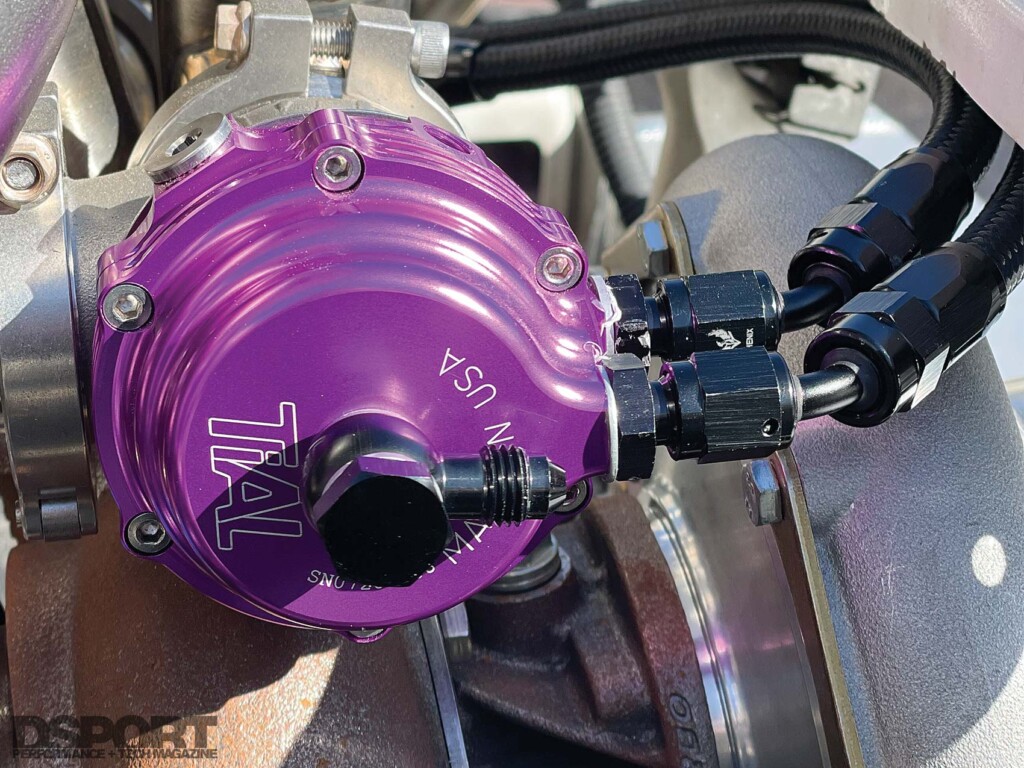 An unconnected or leaking boost signal line will lead to excessive boost and dead engines.

If the boost controller and wastegates are plumbed properly and the ECU is calibrated correctly, the engine should be able to hit the commanded boost level easily. If your engine’s boost has gone rogue, dangerous boost levels can quickly lead to an untimely death for the engine. Always, start tuning on a new engine with the boost controller bypassed and the maximum boost pressure set by the wastegate spring. Verify that boost is being controlled by setting the rev limit low for the initial pulls and then gradually increase on successful pulls noting if boost pressure is exceeding the value set by the springs in the gate. If boost is excessive, check the routing of the signal lines from the engine to the gate. Any leak or open line can lead to uncontrollable boost. A poorly designed exhaust manifold or a “tune” that is too rich and retarded can also lead to boost control issues. If you don’t get your boost under control, chances are it will kill your engine in short order.

Aftermarket timing gears and cams always require checking with a degree wheel for proper alignment. Always follow the OEM factory service manual when replacing a timing belt and tensioner or you may end up with bent valves and damaged pistons.

There are a number of mistakes and missteps that can lead to a lack of proper tension with an engine’s timing belt. Most of these are the result of failing to follow the factory service procedure during a timing belt service. When timing belt tension is inadequate (can also occur over time due to belt stretch or failure of hydraulic tensioner), the camshaft(s) can begin to skip a tooth or two and change their relationship to the crankshaft and piston position. Eventually a position is encountered where the pistons contacts the valves, bends them and now there is another engine a victim of a dumb way to die. Another possible dumb way to die can be the result of not having the cam(s) properly timed in the first place. There is no standard for identifying cam and crank timing marks on engines, so the only way to do it right is to follow the factory service manual procedure. 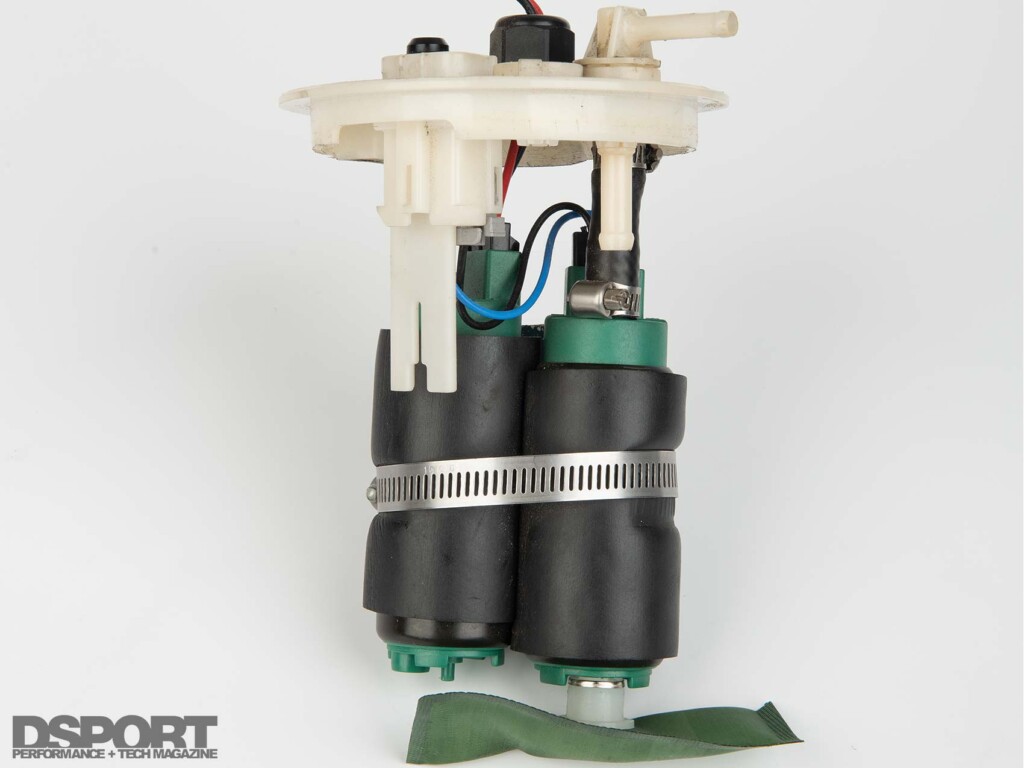 Due to the increased fuel demands of E85 and the rising power levels of vehicles on a whole, more and more vehicles are resorting to a fuel system comprised of multiple pumps. While using two or three fuel pumps may provide a cost-effective solution to meet fuel supply demands, it also creates an issue when one of the pumps in the pair or trio fails. Since just one running pump is enough to keep everything running well up to a certain power level, the problem is often masked until its too late. Another problem often masked is a faulty injector. A partially clogged injector may not cause serious issues under idle and cruise but under wide open throttle, it may result in a cylinder melting down a piston due to an excessively fuel lean condition. By measuring the EGTs at each cylinder these issues can be found before damage occurs.

If you have a failure that compromises your engine’s cooling system, serious damage can happen to your engine when it runs too hot. The temper of aluminum can go soft, deck surfaces and cam centerline can warp and distort. Hot spots in the cooling system can induce pre-ignition and detonation. Pistons can grow in size faster than the cylinder and begin to scuff the cylinder walls. The combustion seal provided by the head gasket can become compromised. Considering that most cooling system failures are simply the result of a failed belt, hose or thermostat, losing an engine to a cooling system damage makes it a dumb way to die.

Another dumb way for an engine to die that is heat related is associated with heat soak. When a driver doesn’t allow an engine to properly cool before making another run on the dyno, lap at the track or pass at the strip, intake air temps or coolant temps can lead to detonation and pre-ignition. 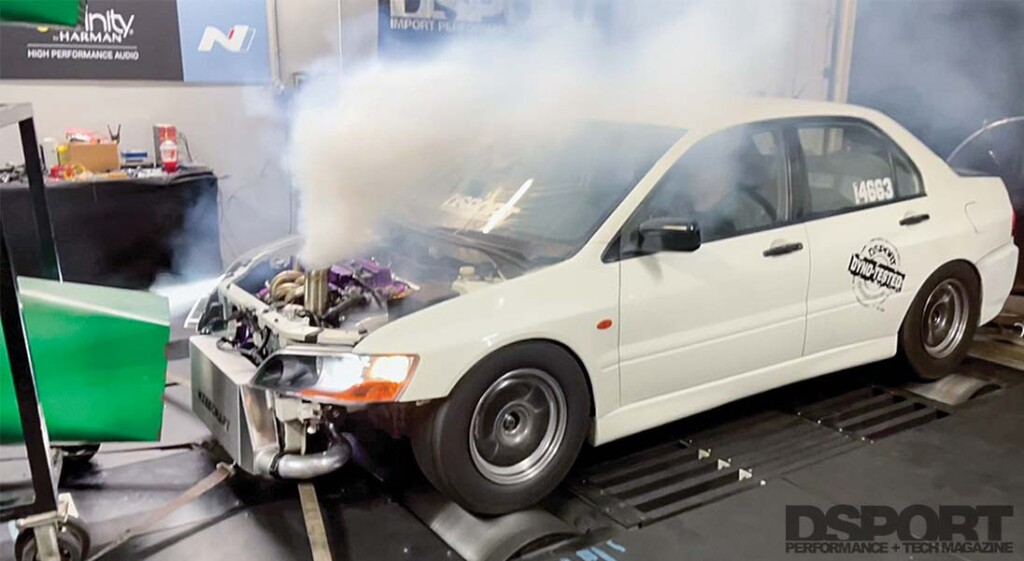 “Blame the tuner” may be the most popular excuse for an engine dying. In many cases, it is the tuner, but there are really countless dumb ways to kill an engine. Sensors can be miscalibrated, misidentified in the ECU software or become disconnected. Nitrous solenoids can leak when you forget to turn off the bottle and cause a massive backfire in the intake manifold. You can also lose an engine or end up with one that never lives up to its potential if you don’t follow the correct method of engine break-in (Issue #185).