In the previous issue of DSPORT, we addressed all of the possible air flow restrictions that could be serving as bottlenecks. However, simply eliminating all of the airflow bottlenecks only completes half the job. For peak performance and reliability, fuel flow needs to be optimized as well. Too much air and not enough fuel is a recipe for disaster. The engine may run lean and burn up your pistons and valves. Even if you are able to maintain safe air-fuel ratios with a deficient fuel system (by reducing boost pressures), you will never realize the maximum power possible with your performance combination. Starting from the tank that stores the fuel for your vehicle, let’s take a look at every component along the way to the final destination in the cylinders.

By Michael Ferrara // Photos by Staff 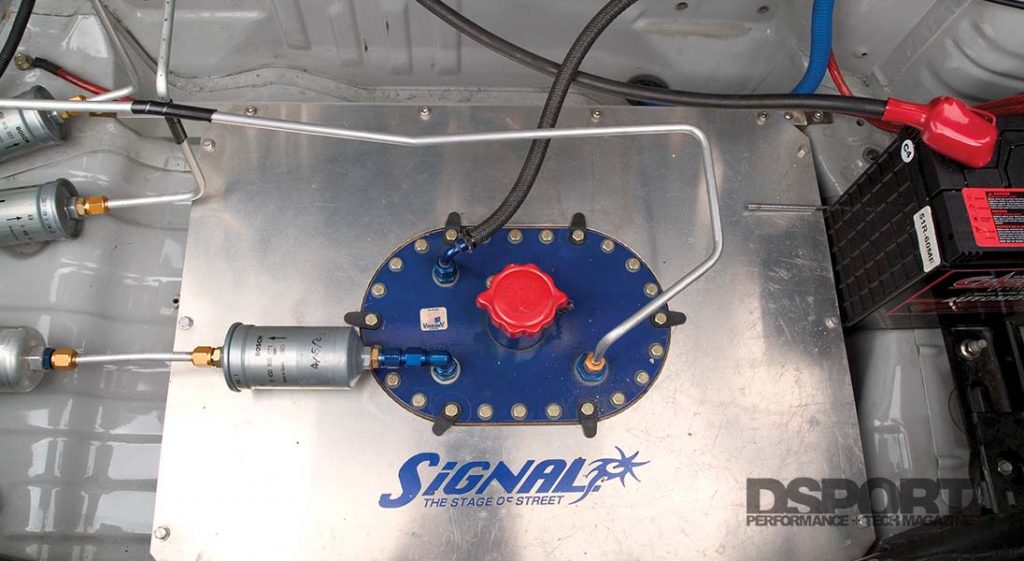 The fuel tank (or fuel cell) serves the simple function of being the storage tank for the fuel. Factory fuel tanks are usually pretty oddly shaped and many feature a saddle design to allow for driveshaft clearance. While these odd shapes may not cause any issues during regular driving, subjecting the vehicle to high G loads during racing may cause a situation where the fuel moves away from the fuel pump pickup (usually when the fuel level in the tank is less than half). If this occurs, the pump sucks air and fuel pressure and delivery rapidly drops. This issue is generally addressed in one of four ways: 1) replacing the OEM fuel tank with a well-designed aftermarket fuel cell usually eliminates the issue as the fuel cell uses a foam to ensure that the fuel is always near the pickup; 2) adding a fuel surge tank to the fuel system that has enough capacity to provide fuel during the period when the pickup in the OEM tank is sucking air; 3) modifying the original tank to incorporate a sump that ensures that the pump pickup is submerged until the fuel tank is empty; 4) incorporate a wicking solution in the tank like Holley Hydramat. 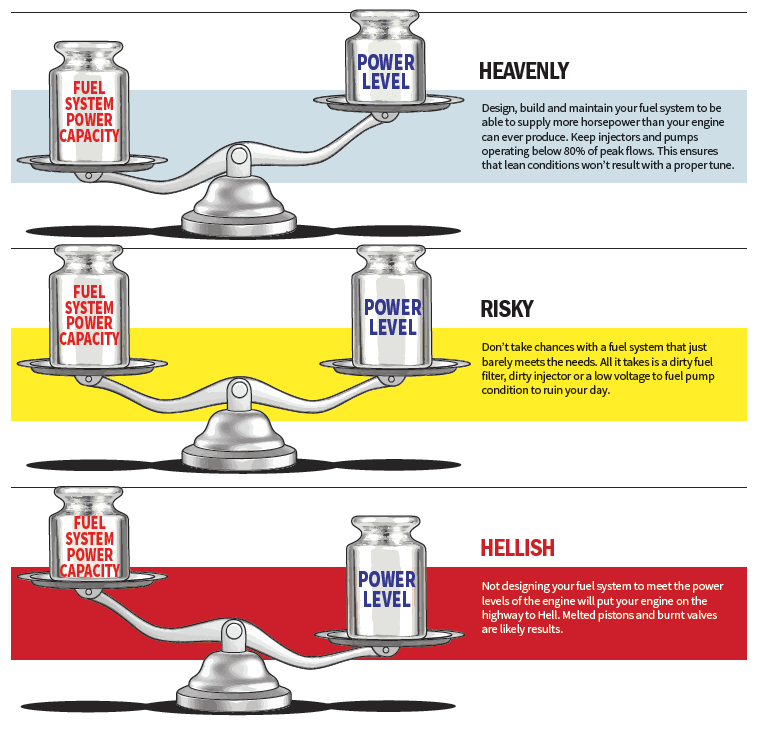 Once the deficiencies in the fuel tank are addressed, taking a look at the pickup for the fuel pump is the next order of business. In most applications the in-tank pump will be fully submerged in the tank and there is usually just a small pre-filter at the inlet of the pump. This is often referred to as the fuel sock since early applications generally had a filter that resembled the shape of a sock. Be sure that the sock is always clean and that it is of an appropriate size for the application. When this sock gets clogged, it can dramatically affect fuel flow as electric fuel pumps are much better at pushing fuel forward into the system than sucking fuel through a restriction. 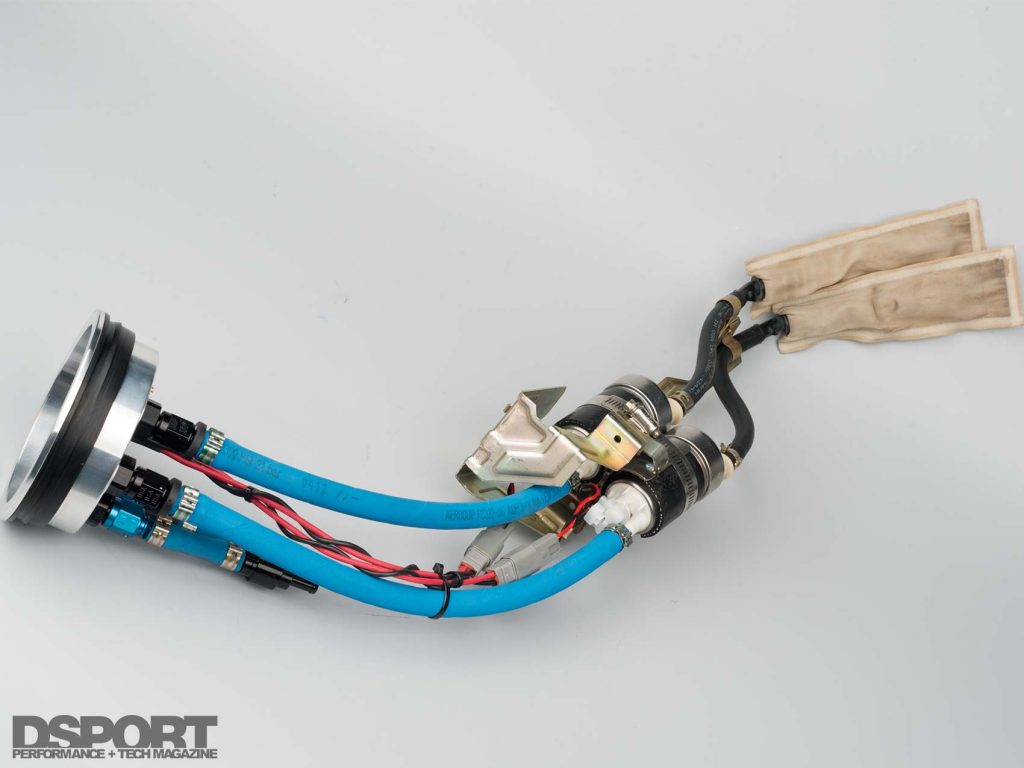 If you are looking to make under 600whp on gasoline, there are a number of high-quality in-tank pumps that will be able to fulfill that role for most boosted applications. If you are planning to use E85, the horsepower potential for the same fuel pump is reduced to about 70-percent of its gasoline capacity. So if a particular pump is adequate for 600whp on gasoline, it will support roughly 420whp on E85. The factory wiring going to an upgraded aftermarket fuel pump is too small to support the current demands in most cases. As a result, less than the peak possible voltage is supplied to the fuel pump and horsepower capacity is diminished. To eliminate this issue, it is a good practice to always upgrade the fuel pump wiring when installing an upgraded fuel pump. Brushless fuel pumps are new to the aftermarket and offer a number of benefits over brushed fuel pumps. Brushless fuel pumps feature lower current draw motors and can also be speed controlled to keep the pump from working harder than it needs to during low-demand conditions. However, the cost of moving over to this technology is usually only justified when switching to a single brushless solution over a multi-pump conventional pump solution. 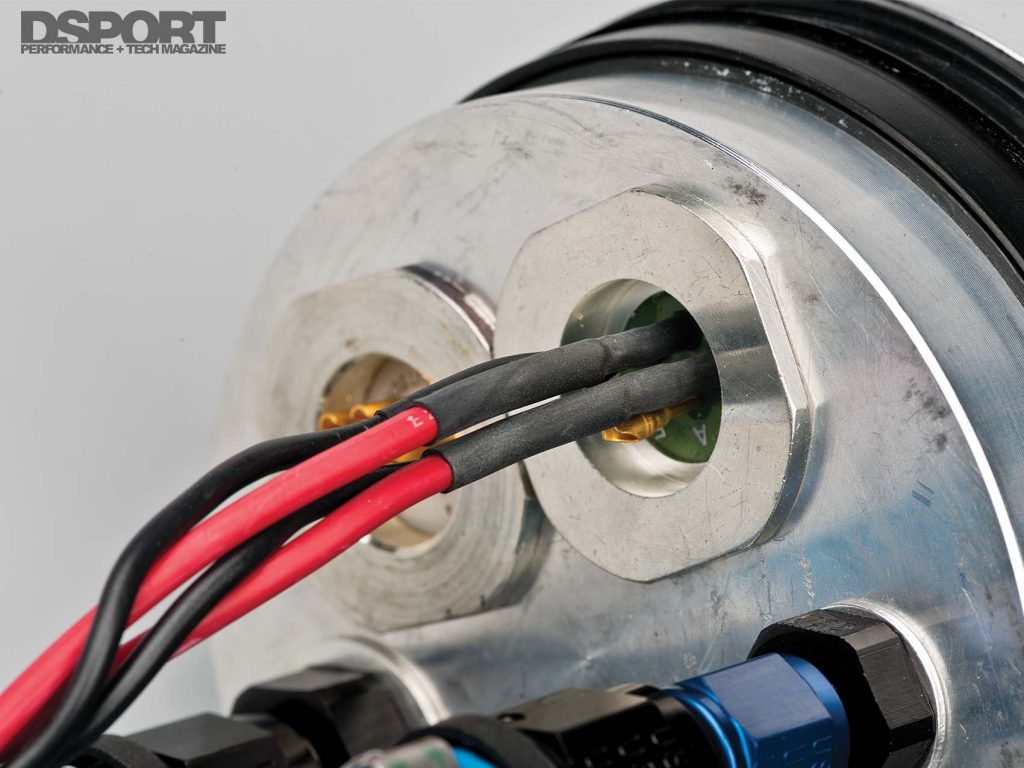 Use the proper gauge wiring to the pumps with the proper connectors to ensure fuel vapors don’t enter the trunk or passenger compartment.

Most main fuel lines on modern fuel injection vehicles are 3/8-inch in diameter. This is equivalent to a -6AN line when comparing to performance fittings. Since the base fuel pressure on most fuel systems is 43.5psi, a 3/8-line (-6AN) is able to support up to 1,000whp horsepower on gasoline. Of course, increasing the size of the main line makes it easier on the fuel pump and increases the horsepower capacity of the fuel line. An -8AN main line will support 1.77-times the flow of a -6AN line while a -10AN main line will support 2.77-times the horsepower of a -6AN line. 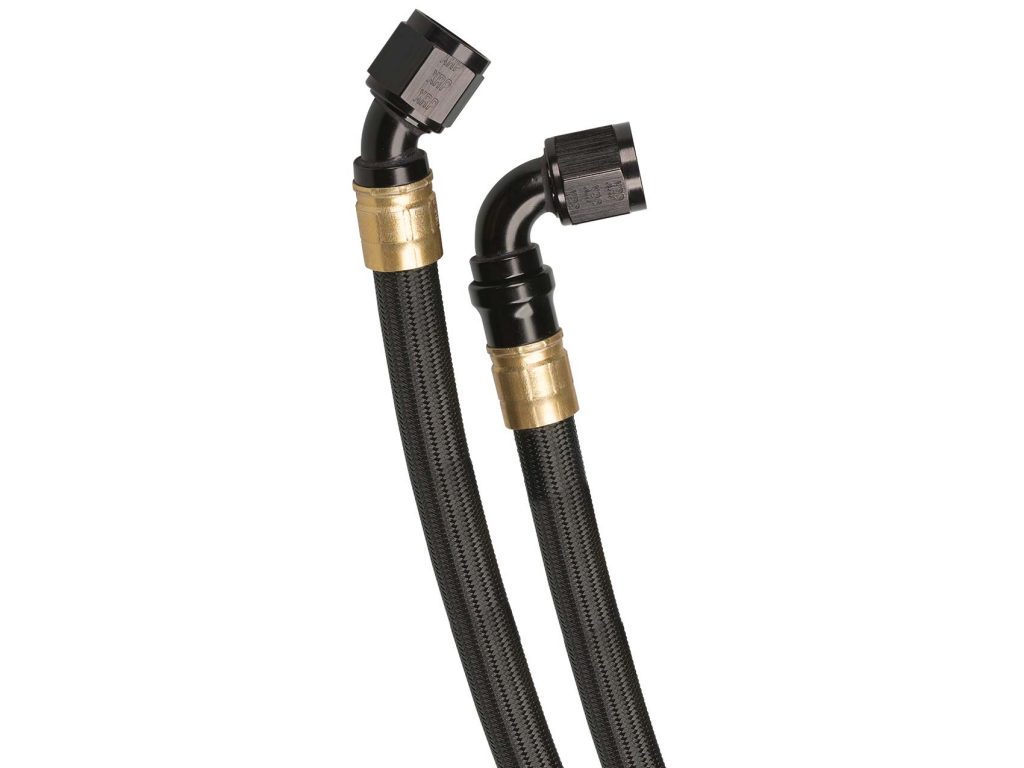 Use the highest-quality performance plumbing you can afford. Use 30- and 45-degree transitions in place of 90-degree to make it easy on the pump.

The OEM fuel filter is designed to work with pump gasoline and at the factory horsepower levels. When you double, triple or go even further beyond the original horsepower levels (or use a different fuel), the OEM fuel filter may not be up to the task. The OEM fuel filter may be restrictive and be forcing your fuel pump to work harder than it needs. Employing a multi-stage filtration system is the ideal solution. This solution uses two or three stages of filters in a series. The first stage is a coarser filter that may only catch particles up to 100 microns in size. The second- and/or third-stage stand will use progressively finer filters that filter down to 20-, 10- or maybe even 5-micron. 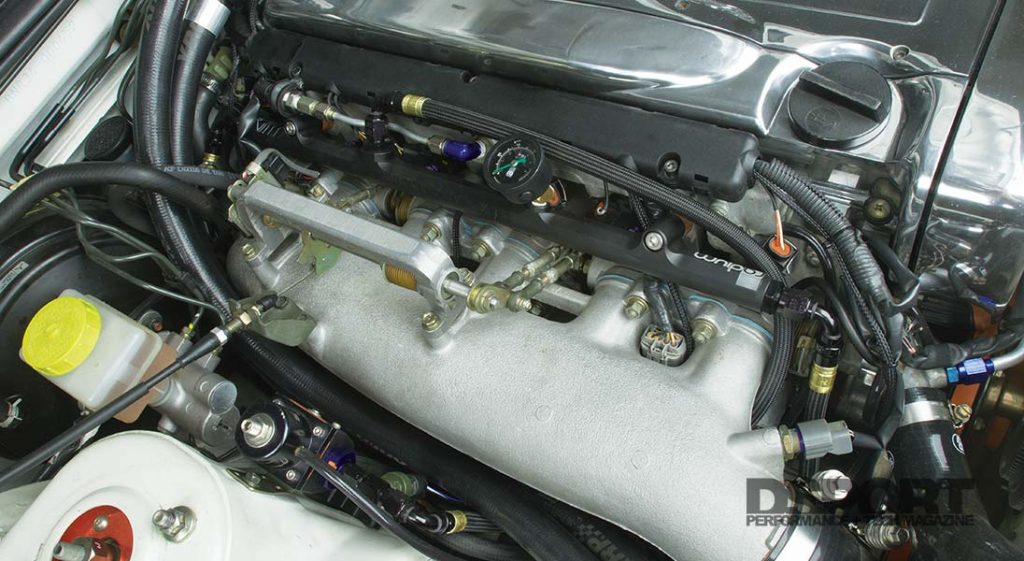 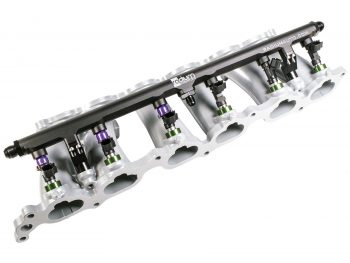 The fuel rail is the distribution manifold for the fuel to each of the injectors. Typically, aftermarket fuel rails will be sized so that the internal diameter is larger than the main fuel line. By making it larger, the pulsations that arise when the injector is pulsing on and off are reduced. Many modern fuel rails on OEM applications now feature pulsation dampers. Pulsation dampers are also starting to be used on aftermarket fuel rails. Aftermarket fuel rails are typically set up with –AN fittings in place making them easy to fit to an upgraded main fuel line. On inline six-cylinder engines, it is a good practice to feed the fuel line from the center to help equalize the flow to all six injectors. When fed from just one end, the injectors farthest away from the feed point may receive less or a drop in pressure in high-demand situations. 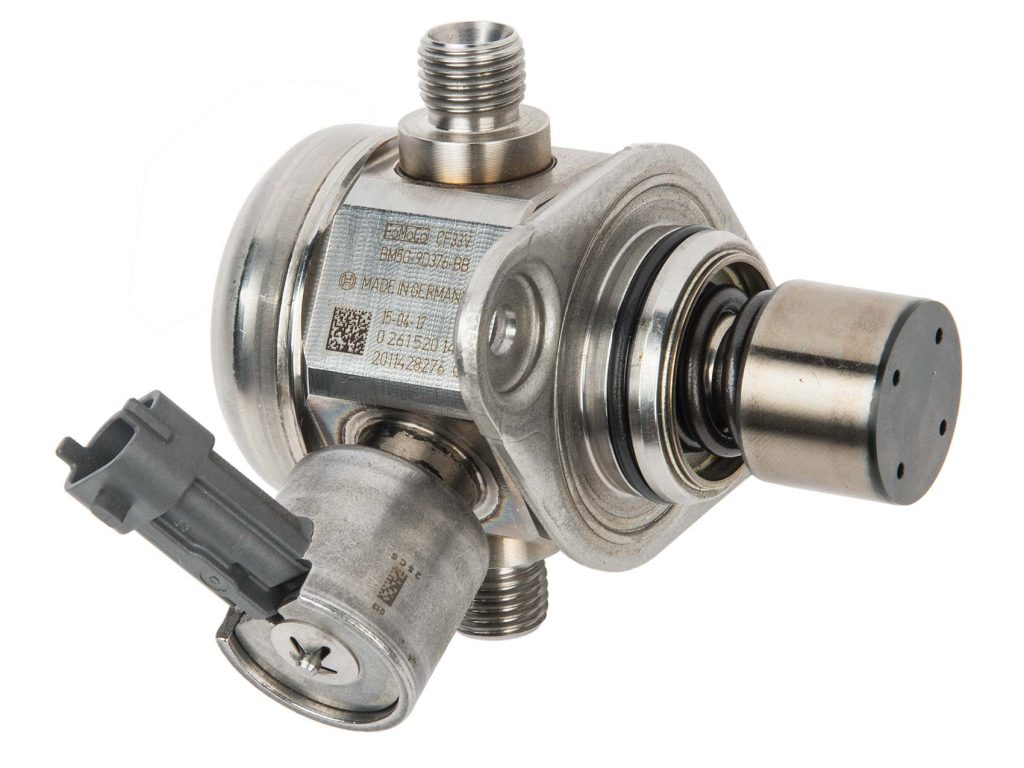 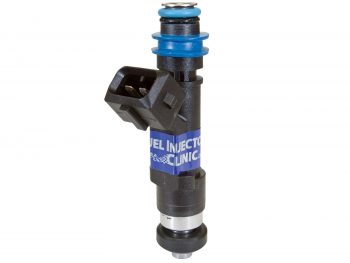 The most critical components in the fuel system are the fuel injectors. The fuel injectors serve two main roles in the fuel system: delivery and atomization. First, they are responsible for regulating fuel delivery to the cylinder. Controlled by the ECU, the injectors are simply electronically-controlled valves that are pulsed to deliver a desired amount of fuel to the cylinder. The second role of the fuel injectors is less discussed but arguably as important. The injectors also atomize and direct the fuel into the port (on port fuel injection) or cylinder (direct-injection). Ideally, the atomization produces a mist of fuel with small droplets that deliver a controlled burn rate (ideal combustion). This results in peak power, lower emission and increased efficiency. 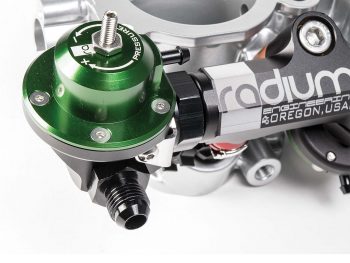 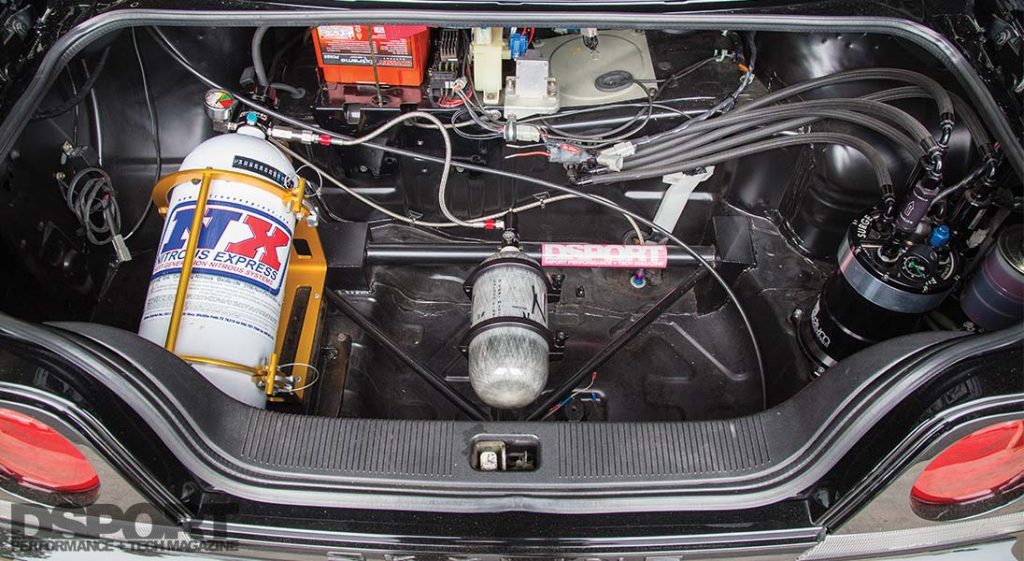 Brushless fuel pumps, fuel surge tanks, quality plumbing and proper wiring result in a system that can meet all of your fueling demands even on E85. 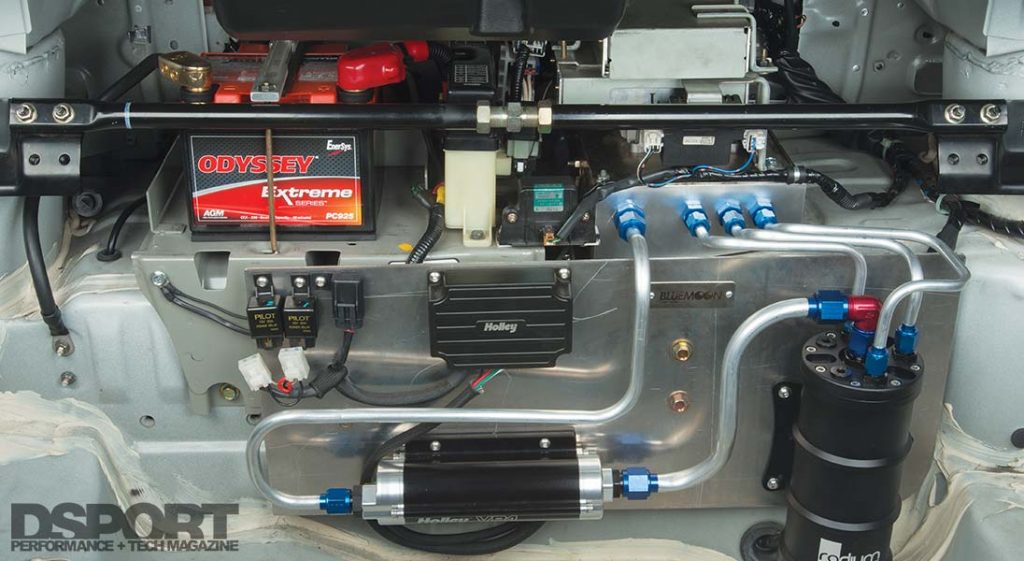 Properly addressing every component that the fuel goes through will ensure your engine is running at an optimal performance level.