Get ready for me to piss off a bunch a people again. Making a big peak power number on a turbo engine is easy. It does not take a genius. The recipe is simple. Simply select a big turbo (enough airflow capacity), crank up the boost, add enough fuel and lay down a peak power figure that reflects the maximum flow potential of the turbocharger. For a peak power number, it hardly even matters what engine is used, the power is determined by what turbo is chosen. As long as the engine can spin high enough and hold together long enough for the compressor section of the turbocharger to reach its flow potential, the maximum peak horsepower will be the same. While a “wow, that’s stupid power” might be heard as the team celebrates a rather simple accomplishment, looking at just the peak or stupid power figure on a turbocharged engine gives no indication of how well the engine and tune is actually performing. To go beyond stupid power with this project, we will not only target a peak power in the range needed for the desired trap speeds, we will engineer and develop the engine combination to deliver the broadest power band possible with the highest efficiency. 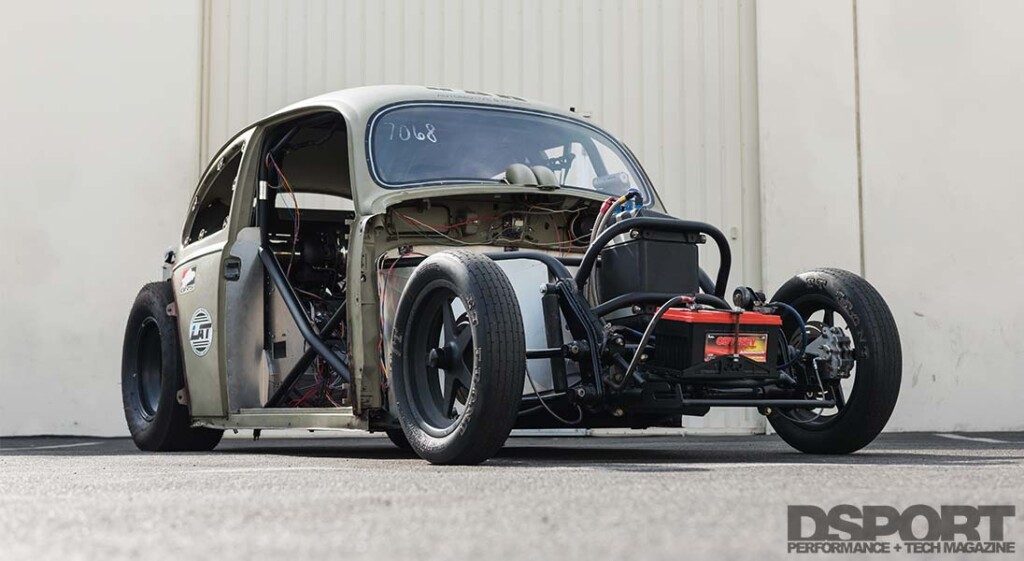 When delving into any unfamiliar engine platform, it always helps to start with identifying the strengths, weaknesses, opportunities, and threats associated with the engine platform and the intended goals. With this project, we aren’t starting from a clean-sheet of paper, but rather picking up from a spot where there is a running engine, turbo, and engine management combination in the car. As such, we will seek to identify the strengths, weaknesses and opportunities in our current combination. 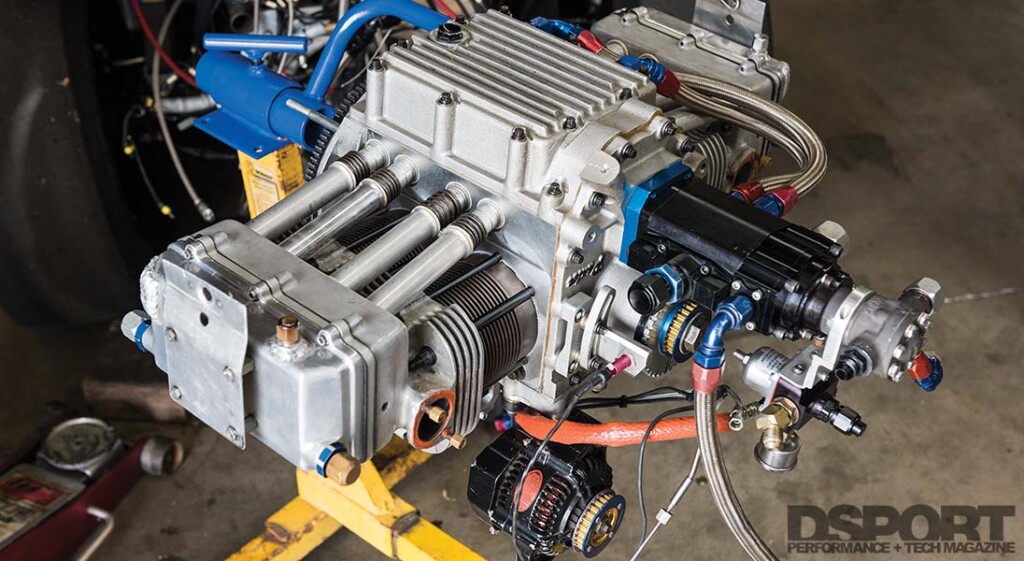 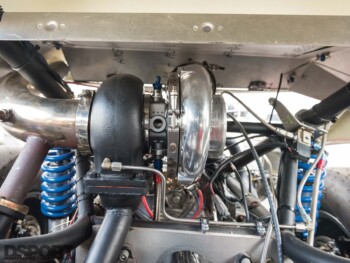 The biggest strength of our current setup is its ability to deliver data. We set up the vehicle and engine with an AEM Infinity and enough sensors to truly pinpoint the conditions of the running engine. We also have a fuel system that will have no problem meeting the fuel demands of the engine. Thanks to an 8-injector setup, we will have the ability to stage the injectors and have a bit more control during idle and low-fuel-demand conditions. The current engine is based on a Pauter aftermarket case with a 4-inch bore Autocraft engine bolt pattern for the heads. The current bore size of 4.030” allows for a wide selection of off-the-shelf pistons. The case should not impose any limits on power handling. A 70mm SCAT billet crankshaft and Carrillo rods should also have no issues supporting 1000bhp (850whp).

Where most other engines have a fixed deck height, the modular design of the VW air cooled engine allows for taller or shorter cylinders to be used to easily change this parameter. Of course, these changes often require changes in pushrod lengths and head fasteners, but it does allow for a much wider range of rod ratio choices. 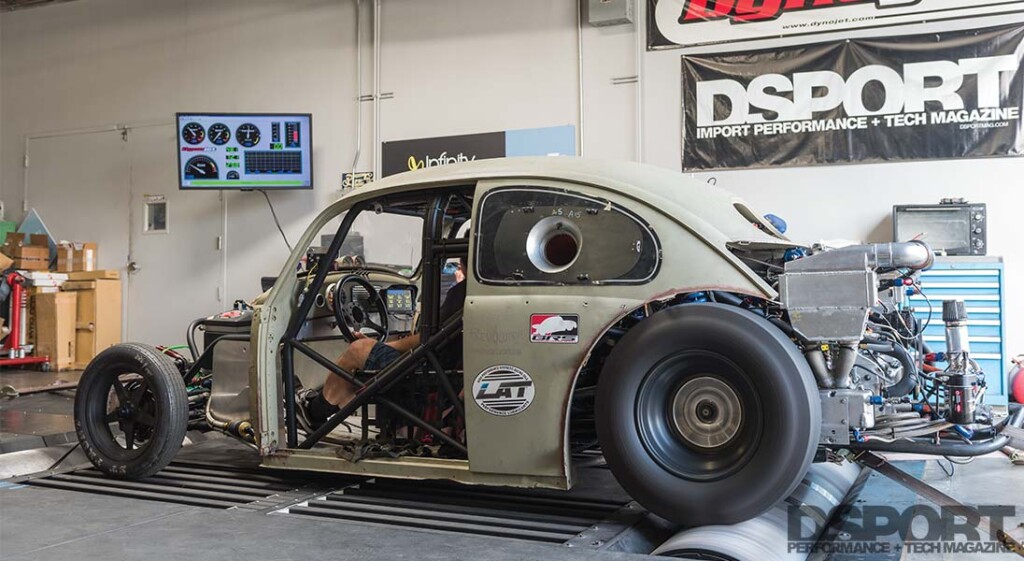 The Bug will be spending a great deal of time on the dyno to aid in the engine development process. Now that it’s on E85 instead of methanol, it’s much easier on the human body.

The basic engine design of the air cooled VW engine is from the 1930s. The original 1-liter was designed for 24 horsepower. Today, we are looking at taking an evolution of this engine that is only 2.3 times larger in displacement but will be producing over 40 times the power output. The aspect of the engine being air cooled becomes one of the largest weaknesses and challenges that must be overcome and we will save most of that discussion for a future installment. Despite evolution over the years in the aftermarket case design, the engine still has weird offsets in cam lobe locations and rod offsets. The crankshaft itself is only secured by three main caps too. One of the oddities is that VW decided to use one single camshaft lobe to control two valves (one on either bank of the engine). Being that this engine is not an overhead cam design, extremely long pushrods are required. Long pushrods need to be stiff which means they can be heavy which means more valve spring pressure is required. Since the pushrods on the high-performance builds are generally steel instead of aluminum, the different expansion rates in the material means that valve lash increases as the engine warms up.

– When cylinder heads not torqued per maintenance (worse when cold)

• One lobe for two lifters 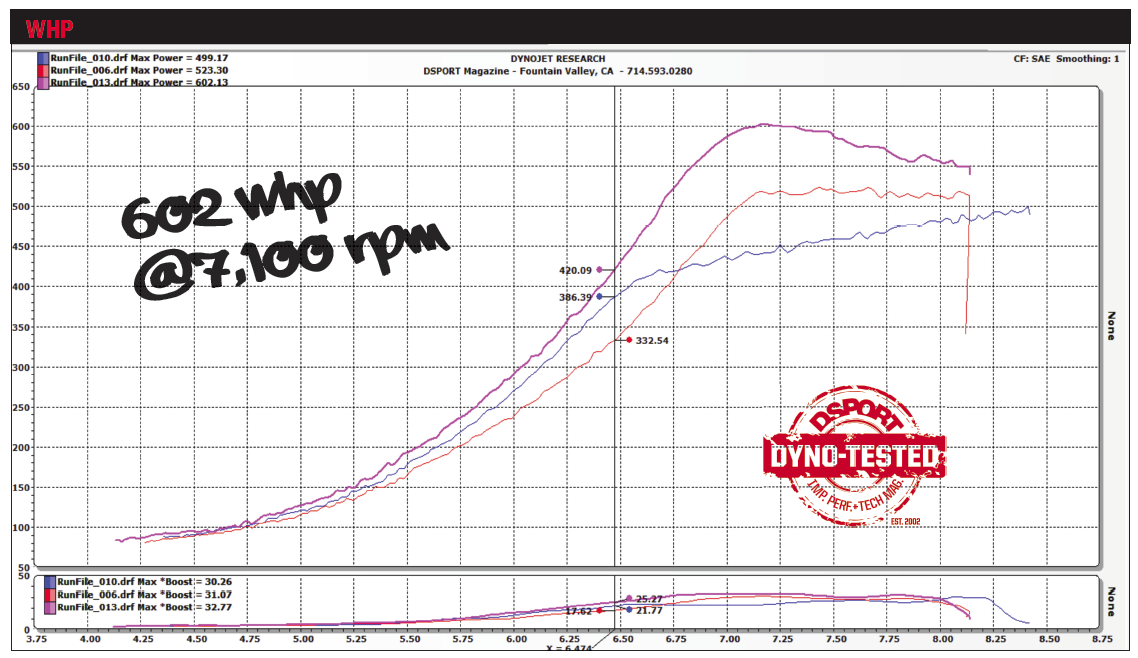 (Blue Line)Once the bug came to life, we found it to be making right about 500whp at 30psi of boost on the wastegate. We also found there to be a leak coming from the liquid-to-air intercoolers (liquid into the air side).  Until it could be repaired, we ran without intercoolers.

(Red Line)Dialing in the boost curve picked up some serious mid-range and even some power on the top-end. However, losing the intercoolers did require us to back down on the ignition timing forfeiting low-end power.

(Pink Line)The lazy boost curve was much improved by switching to a smaller A/R turbine housing. Now power is over 600whp but should improve drastically soon. 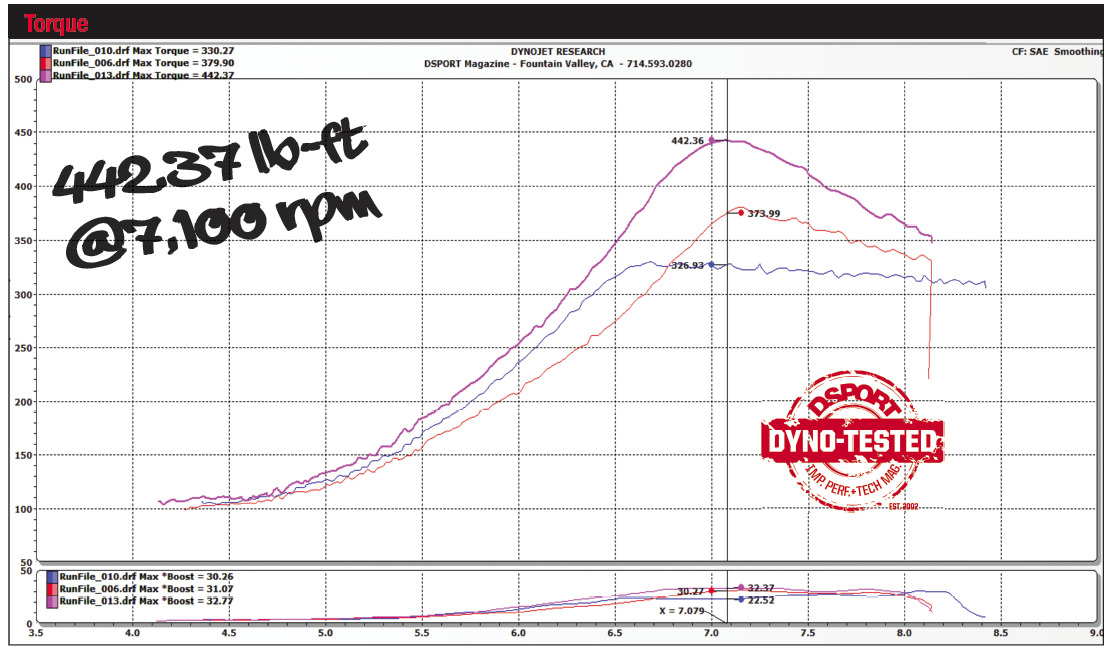 Having an engine make peak torque and peak power at the same RPM is usually an indicator of a mismatch in the combination and a need for extensive development. Before blaming the current combination entirely, we are fixing the cracked cylinder heads and refreshing the engine before additional tuning.

While we may not have started with a blank sheet for an engine design, the modular design of the VW air cooled engine is an engine developer’s dream. Being that it is air cooled, the viability of designing a custom billet cylinder head is a serious possibility. Being that the cylinders are modular to the case, the only restriction on cylinder size is the bore spacing and bolt pattern for the cylinder head.

Currently, the pistons in the engine are an older design with thick rings and limited features. Rather than make a new fully-custom piston design, we are having Mahle modify an existing shelf stock piston as a starting point. This will give us a much-improved ring package (1.0×1.0x2.0mm) which should result in superior ring seal and elevated torque output. We have also designed and machined a custom torque plate or honing plate to be able to simulate the stresses on the cylinder once installed in the engine. While there are probably a host of people that will try to tell you why it is not necessary on a VW air cooled engine, we are fortunate enough to have knowledge of A/B testing done on a Pro Stock class VW engine that showed significant gains from the process.

The current cylinder heads on the engine are as typical of what you are likely to find on an air cooled VW engine setup for drag racing. Candlewax-like buildup of aluminum material where nothing existed to make things bigger and better. Since these heads are older than a good portion of our readership, they are an older Autocraft design that had much less material in place compared to today’s version. While the flow might see a slight improvement, the main reason to upgrade is to have a head with more material to reduce the cracking that occurs in the exhaust ports. Since there were no Autocraft cylinder heads in stock, we decided to repair the current heads until we can either get a set of the newest-generation Autocraft heads or make our own set of billet heads.

Some of the other potential opportunities can be found in the turbocharger, intercooler and turbo manifold design. Currently, the turbo manifold is just a single scroll. Doing a new manifold as a twin-scroll design would likely bring in the boost 400-600 RPM sooner, expanding the power band. The current Garrett turbo is also about two-generations behind Garrett’s latest and greatest new generation offerings. The significant improvements in compressor and turbine wheel aerodynamics should make for a substantial increase in response and power delivery.

Being that the engine is air cooled and turbocharged, it stands to reason that limiting the transfer of heat into the cylinder head would put more energy into the exhaust to power the turbine. Thermal barrier coatings of the exhaust port, combustion chamber and piston crown may deliver some impressive results.

• Trying to do too much ourselves

• Anytime that you boldly go where no man has gone before with engine development, there is not only the obvious threats of dealing with the known weaknesses of an engine platform but also the unknown.

(L) When we couldn’t figure out why boost kept dropping on successive runs, we eventually found cracks in the exhaust ports. The warmer the engine, the poorer the boost response. These have since been repaired until we can get a more permanent solution in place. (R) This custom torque plate or honing plate will be used when honing the cylinders. They simulate the stress and distortion of an installed cylinder. The end result is a rounder cylinder on the assembled engine.

Anytime that you boldly go where no man has gone before with engine development, there is not only the obvious threats of dealing with the known weaknesses of an engine platform but also the unknown. There are so many opportunities to improve this platform that we will be taking a lot of paths never traveled or previously abandoned. Advancement in materials and processes may allow us to find success in ideas that just didn’t work with the technology available at the time. When trying to improve so much, it’s very easy to take on more than can be handled at one time. We will need to do our best to avoid filling our plate as if we were camping at an all-you-can-eat buffet.

Don’t judge an engine by its peak power. Not all 1000-horsepower turbocharged engines deserve praise. In addition to the obvious loser engines that have lifespans shorter than your first sexual experience, even the 1000-horsepower engines that live a long life may be so poorly developed that the power bands are only good for dyno contests and trap speeds. Underdeveloped cylinder heads, non-optimized camshafts and poorly designed manifolds are typical. To compensate, boost pressures are often increased to make up for the shortfall. To accommodate the massive amount of unqualified tuners in the market, many have turned to overweight pistons, massive aluminum rods, ultra-thick wall piston pins as the band-aid for the tuners that often follow the “Safe” tune and Forrest Gump (Rich and Retarded) tuning philosophies. That’s a discussion for another time as I think I pissed off enough people with part 1. Stay tuned.