Broken oil pump gears, sheared flywheel bolts, loosening clutch cover bolts and damaged bearings are just some of the “fun” that’s in store for your engine if you don’t dampen and control the torsional vibrations in your engine’s crankshaft. The severity and frequency of these vibrations are affected by the stiffness of the block, the engine speed (RPM), the crankshaft design, the weight of the piston, pins and rods and the cylinder pressures. OEM crankshaft dampers (a.k.a. harmonic balancers) address this issue quite well in 99-percent of all applications where the engine is run at OEM power levels and driven like a commuter vehicle. When an engine is modified to make more power or driven like a rental car in someone else’s name, the OEM crankshaft damper is likely to get in over its head. In most cases, a quality high-performance aftermarket crankshaft damper specifically designed for your application will get the job done. However, there are some engines that have a design that decreases or limits the effectiveness of any crankshaft damper due to a lack of press fit between the crank and damper. The Mitsubishi 4G63 engine is one such engine. Let’s find out why the 4G63 is a difficult engine to tame and the solution that ATI engineered to tame the beast. 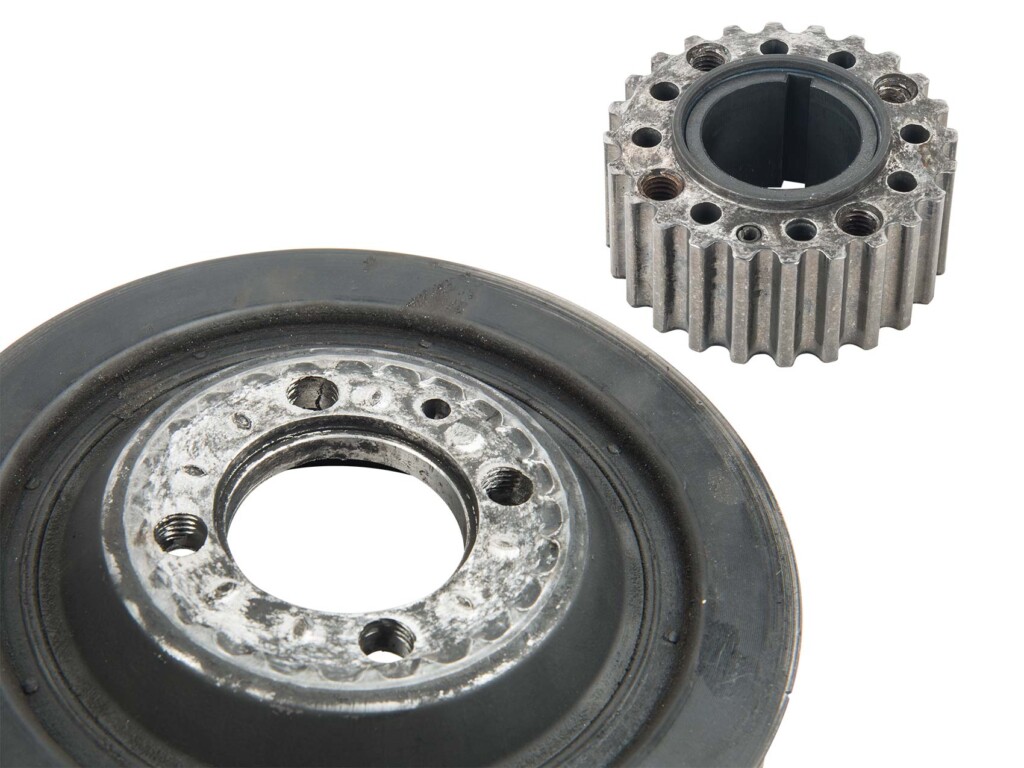 The OEM balancer and lower timing gear have evidence of extreme fretting. Torsional vibration was so extreme that the four bolts holding the OEM crank damper to the gear were all sheered. This is a relatively common occurance on big power 4G63 engines. Fortunately, there is a solution.

The Mitsubishi 4G63 engine has earned legendary status for its ability to handle extreme amounts of horsepower when properly built. Since its debut in the 1G DSM to its retirement in the EVO IX, the 4G63 underwent design changes to the crankshaft, block, rods, pistons, cylinder heads, bearings, oil pump, intake manifold and turbocharger. While not all variants of the 4G63 share the same strengths and weaknesses, the factory damper on all the variants leaves much to be desired. In fact, the failure of the stock balancer on my 1990 Eagle Talon TSi caused my first ever “oh shit” moment in Project Talon when it failed and sounded as if the crankshaft had come out of the engine.

When Club DSPORT machinist and assembler Sam Lin had his OEM damper sheer the bolts on his EVO XIII damper, the broken parts told the story. The OEM crankshaft damper showed evidence of major fretting. This fretting occurs when the OEM damper simply can’t remove enough of the torsional energy from the system. As a result, the torsion attacks the 4-bolts securing the damper to the crankshaft’s timing belt cog. One reason why this occurs is that the design used by Mitsubishi decreases the efficiency of the damper since the lower cog is not a press fit to the crankshaft.

We get a number of Nissan RB26 engines through the shop at our Club DSPORT facility. While the factory crankshafts seem to take all the abuse anyone can throw at them, we had the first ever RB26 engine come to us with a cracked crankshaft. This engine had been built by a supposedly reputable engine builder that suggested an upgrade to a high-quality aftermarket crank damper. There was nothing wrong with the builder’s recommendation, but there was a big issue with the installation. This builder figured that a new part is a good part and simply installed the balancer on the crank. Because this crank snout was on the skinny edge of the factory spec and the aftermarket balancer’s hub was likely on the big end of its sizing spec, no interference fit occurred. The bore of the damper hub was 0.0004” bigger than the outside diameter of the crank snout. The result was that a perfectly good damper wasn’t able to do its job. Without dampening taking place, this 800whp RB26 ended up cracking the crankshaft after about only 1,500 miles. Remember, the paper clip can only be bent back and forth so many times and when there isn’t a crankshaft damper in place to limit the degree of this bending, the parts will fatigue and give up. After we rebuilt this engine, the same damper was used. This time the proper amount of interference was set. Now, the engine has 30K trouble free miles under its belt. 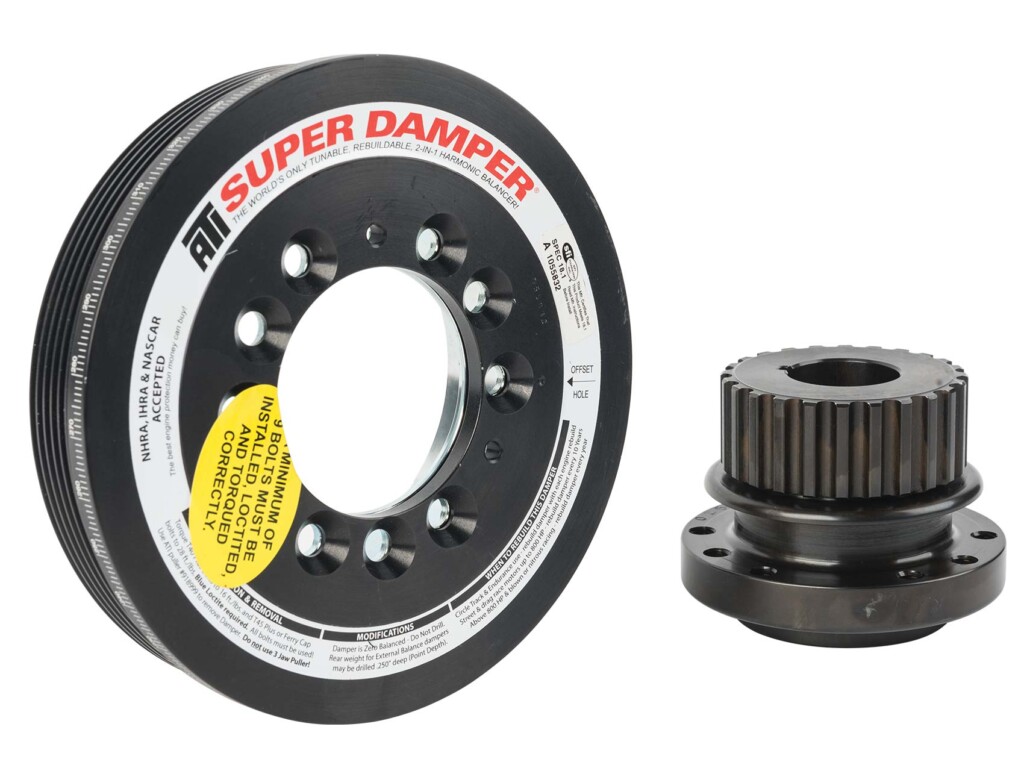 The ATI Super Damper for the DSM and EVO 4G63s features a design different from the OEM with respect to how it attaches to the crankshaft. An inteference fit is achieved by the new lower timing gear that is machined with the crankshaft damper hub.

Back in the early days of import drag racing, ATI worked with a racer named Brent Rau that had one of the fastest 4G63 cars on the planet. Initially, ATI simply made a replacement damper that attached to the OEM lower timing gear. While this damper performed significantly better than the OEM damper, it wasn’t enough for those pushing these engines to new limits. 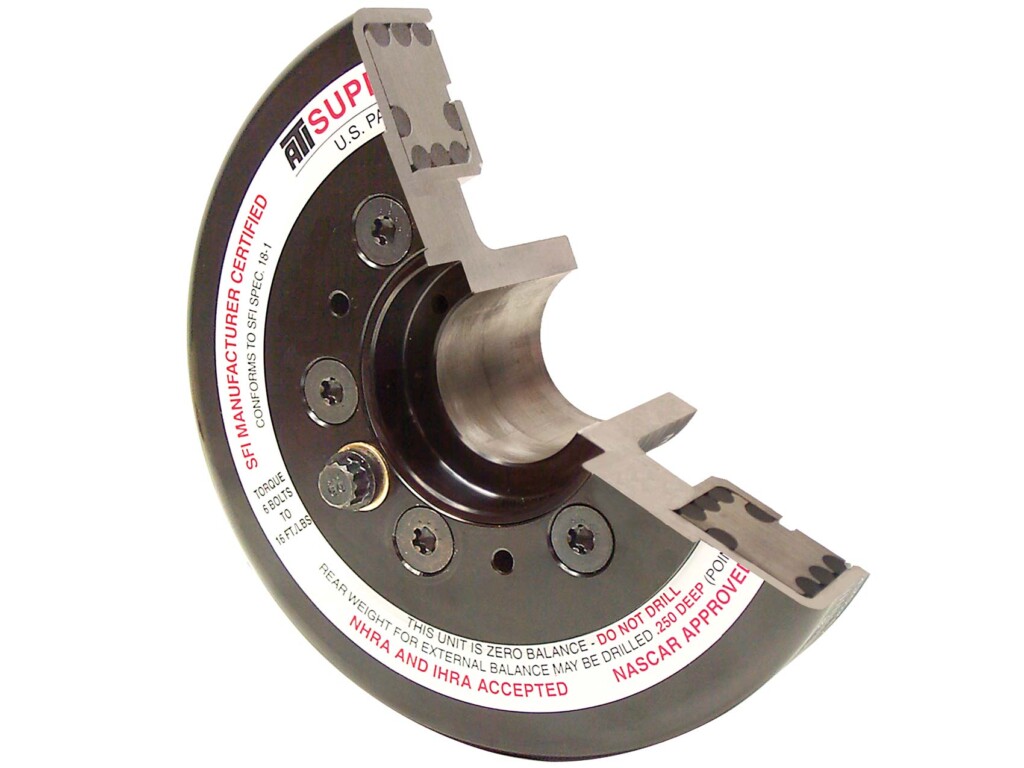 ATI Super Dampers can be “tuned” for special applications by changing the stiffness of the rubber in one of the 6 to 12 elastomer rings. These rings can also be serviced to make the Super Damper good as new. Service life depends on usage.

ATI Engineer John Lane says, “The problem with many import engines is that the engineers have shortened the crankshaft and removed the press fit of the lower timing gear in order to make the engine package more compact.” To fix this, ATI decided to make the damper hub and the lower timing gear integral, eliminating the four bolts that eventually yield. In doing so, ATI also increased the amount of contact length of the press fit. With these changes, the proper transfer of the harmonic vibrations can be transferred to the damper assembly. Since the damper is doing a better job of eliminating crankshaft twist, everything attached to the crankshaft also benefits. Flywheel bolts stay put, clutch covers stay in place and harmony is restored. The design pioneered by ATI for its 4G63 application is now also used on other applications with similar architecture.

Every time a crankshaft makes a full revolution in a running engine, half of the pistons in the engine have been pushed down the cylinder on their power stroke. The force exerted by the connecting rod onto the rod journal rotates the crankshaft. In addition to delivering the force needed to rotate the crankshaft, there is also enough force to cause a very slight deflection in the crankshaft. It’s a small twist that the crank oscillates between a sprung and unsprung condition. Since this force isn’t enough to cause a permanent bend in the crank, the crank flexes back to its original position once the force nears zero at BDC for that piston. The amount of degrees of crankshaft twist may be less than half a degree or as much as two degrees, depending on the amount of dampening being delivered by the crankshaft damper. Minimizing the amount of twist is the goal of the crankshaft damper. 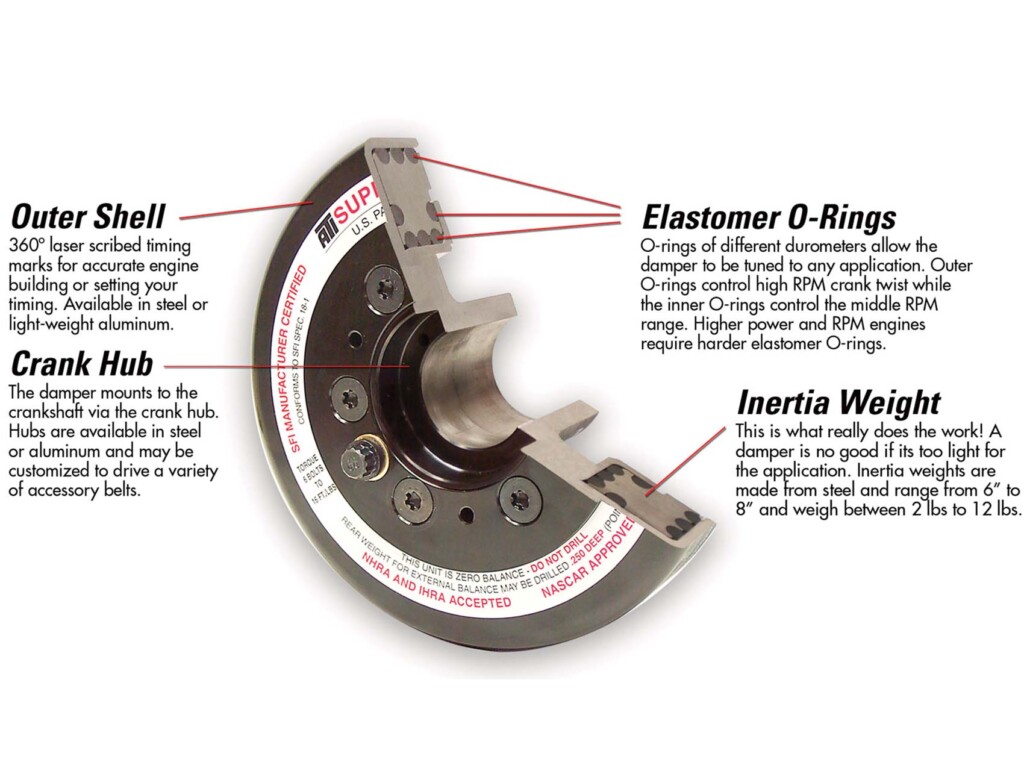 Have you ever driven a car with no shocks or completely blown-out shocks? The car hits a bump in the road and it oscillates up and down for what seems like forever. A car with a good set of shocks will hit a bump and return the car to a stable position. The engine damper works in a similar fashion to the shocks on your car. Instead of working like a shock to dissipate the energy of motion up and down, a crankshaft damper works in the same way to control the motion of the crankshaft twisting to and from. What happens when a crankshaft twists too much? Have you ever taken a piece of metal and bent it back and forth until it breaks? The same result can happen to your crankshaft if the torsional vibration damper is not up to spec. Less extreme failures include the loosening of flywheel and clutch bolts, broken oil pump gears and wiped out engine bearings. These are all failures that need to be avoided. 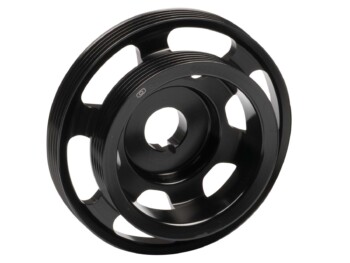 Do you hate your engine? If you do, order up an aluminum underdrive crank pulley and get it installed on your engine as soon as possible. The pretty anodizing on that aluminum hub isn’t going to do anything to limit the torsional twist and harmonic vibrations induced into the crankshaft while your engine is still running. After installation of this time bomb, you will most likely break your oil pump gear if it is driven directly by the front of the crankshaft. Of course, you could get lucky and crack the crankshaft of this engine that you hate. Or maybe this upgrade won’t get the job done. Maybe it will be like an episode of Forensic Files where the spouse doesn’t use enough arsenic to kill the other spouse. Maybe it will only loosen up your clutch cover and/or flywheel bolts. If that happens, you may have to go with the tried and true method of draining out the oil and driving until the engine ceases. Bottom line, if you like your engine, don’t downgrade its crankshaft damper. Instead, upgrade the damper especially if you are making more power or driving harder than the average Joe. 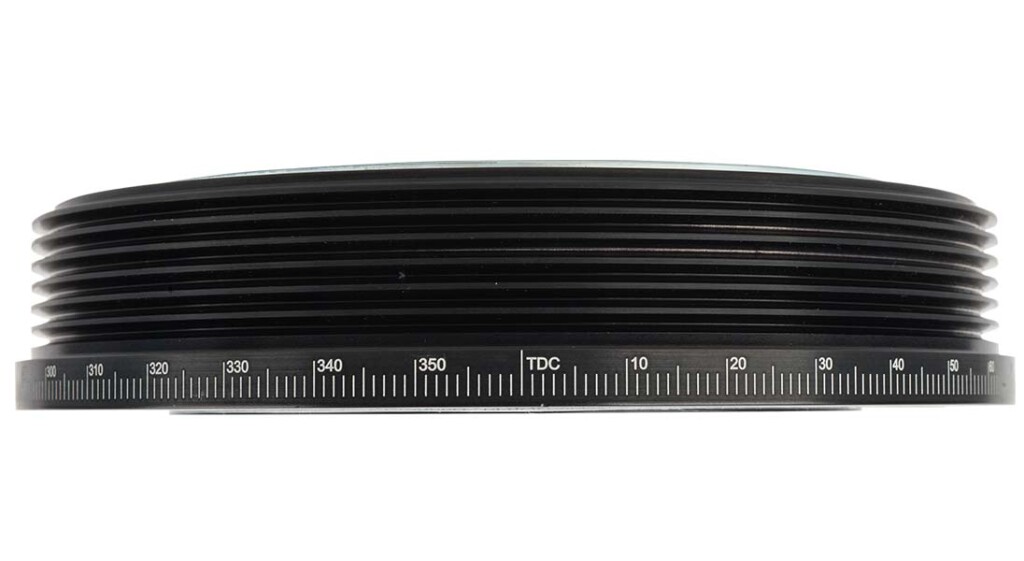 In addition to providing a great solution to damper crankshaft torsion, the ATI Super Damper also has a full-360-degree laser etching for timing marks. This can be helpful when degreeing or checking the phase angle of the crankshaft. SFI SPEC 18.1 approves this damper for race use too.

Have you ever held your engine at 10,000RPM for an hour straight? The good news is that the ATI Super Damper for the DSM and EVO 4G63 has passed that test. It’s SFI Approved, meaning that it’s safe to attach one to the front of your engine and race the crap out of the engine. With a street price of around $400, it’s cheap insurance for your crankshaft and anything attached to it. The units are also serviceable and tunable. If you are turning extreme RPMs or running a stroker crankshaft, the tech department at ATI can let you know a good service interval (up to 10 years) or can help with the selection of different durometer elastomers to tune the damper. For now, we look forward to get this one on Sam’s EVO in off-the-shelf configuration. Visit us in 2021 at The Shootout to watch this damper and the rest of Sam’s EVO break into the 8s.