Friction is a parasite that consumes energy and craps heat. When you allow friction to go unchecked, it will waste your power, burn your fuel and cook your parts. On the contrary, employing a friction reduction strategy delivers significant benefits. Reducing friction reduces waste and reduces heat. Less waste and less heat puts more power to the ground while using less fuel in the process. Understanding the physics of friction, the history of man’s wars against friction and how technology is reinventing the wheel will allow one to understand the magic behind angular contact ceramic ball bearings. 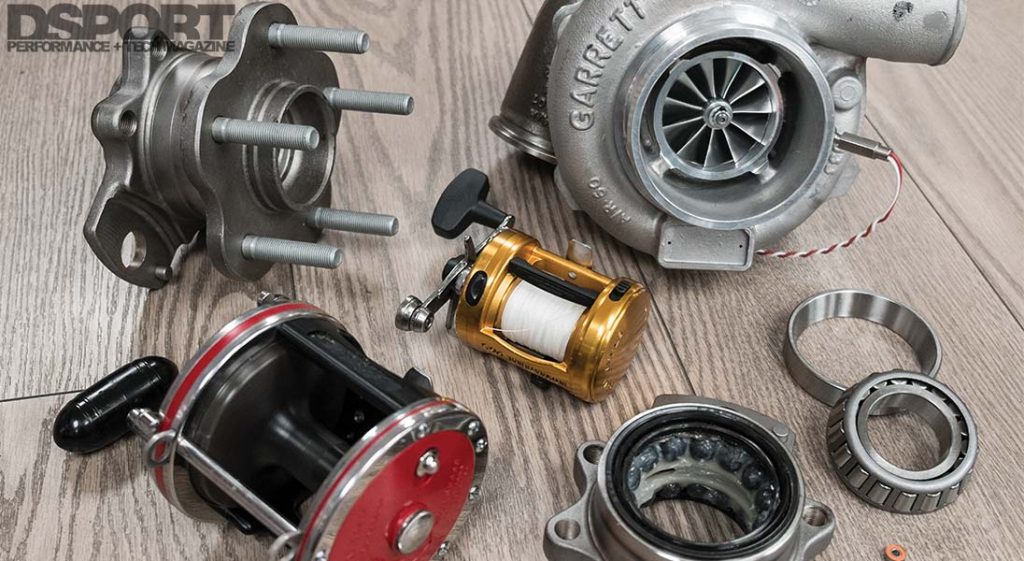 Turbochargers, fishing reels and wheel spindles all rely on some type of roller or ball-bearings to support extreme radial and sometimes axial loads.

Everywhere objects come in contact with one another you’ll find a resistive force know as friction. Physics textbooks will illustrate friction as the force opposite of the direction of movement of a block moved across a surface by an exerted force. Once an object is accelerated up to a constant speed, the only energy needed to keep it at a constant speed is that which is needed to overcome friction. For example, when a vehicle is going a constant 70MPH on a flat road, the only energy required is that to overcome various forms of friction. There is the drag (a form of friction) from the air and the friction from the wheel bearings and drivetrain too. Vehicles with smaller frontal areas and lower coefficients of drag will require less energy to run at a constant speed. Less energy means better fuel economy and performance. 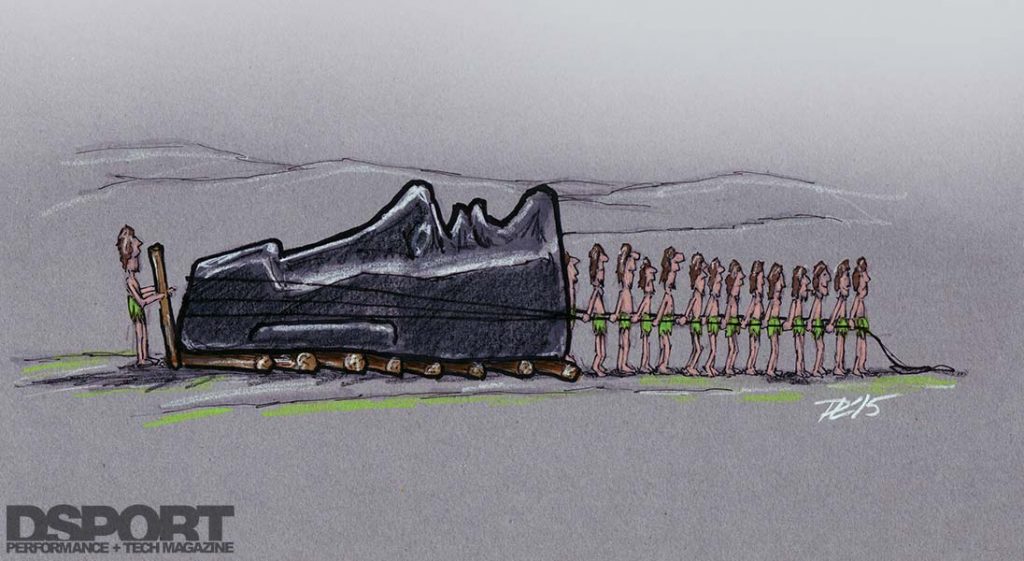 The basis for the roller bearing required the rollers to be moved from the rear to the front of the table as it was dragged forward. This technique is still used to move and set heavy machinery.

It’s been said that where there is smoke, there is fire. In terms of “friction”, where there is heat, there is friction. This can be easily seen on the vehicle systems that use friction with the intent of energy management. The brake pads are perfect examples of devices used to turn energy into heat through friction. Energy can neither be created nor destroyed, it can only change forms. The kinetic or motion energy of a vehicle at speed is turned into heat at the pads and rotors every time the brake pedal is pushed. Of course, a hybrid vehicle recovers this energy by using a motor (acting as a generator) to convert the kinetic energy into electrical energy that is stored in the battery array. This electrical energy is later turned back into kinetic energy when the electric motor at the wheel is powered. 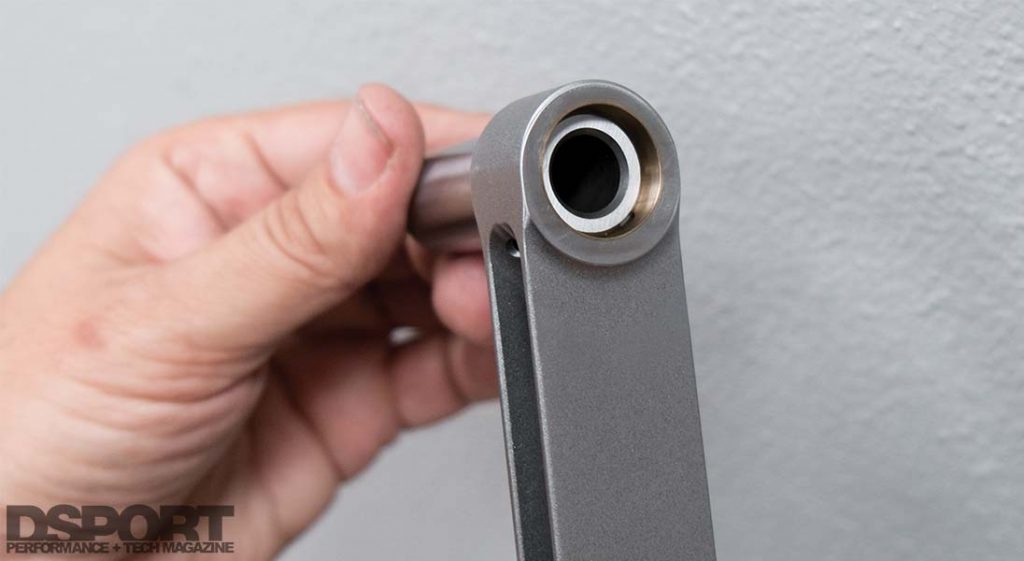 The small ends of connecting rods use bushings to support all of the radial loading through the piston pin. Bushings are a form of plain bearing that offers incredible radial load support due to the large amount of contact area. However, more contact area means more friction.

The Wheel and Axle

The axle-mounted wheel is arguably man’s first notable invention. Early examples date to 3,500 BC. The axle-mounted wheel was the technology that replaced dragging objects over rollers (logs). The wheel allowed much heavier objects to be moved with much less force. The reason was simple. The wheel allowed the resistance force of friction to be significantly reduced. As metallurgy and tools improved over time, wheels became rounder further improving the efficiency and reducing friction. However, the axle bearing combination didn’t improve significantly until the 19th century. 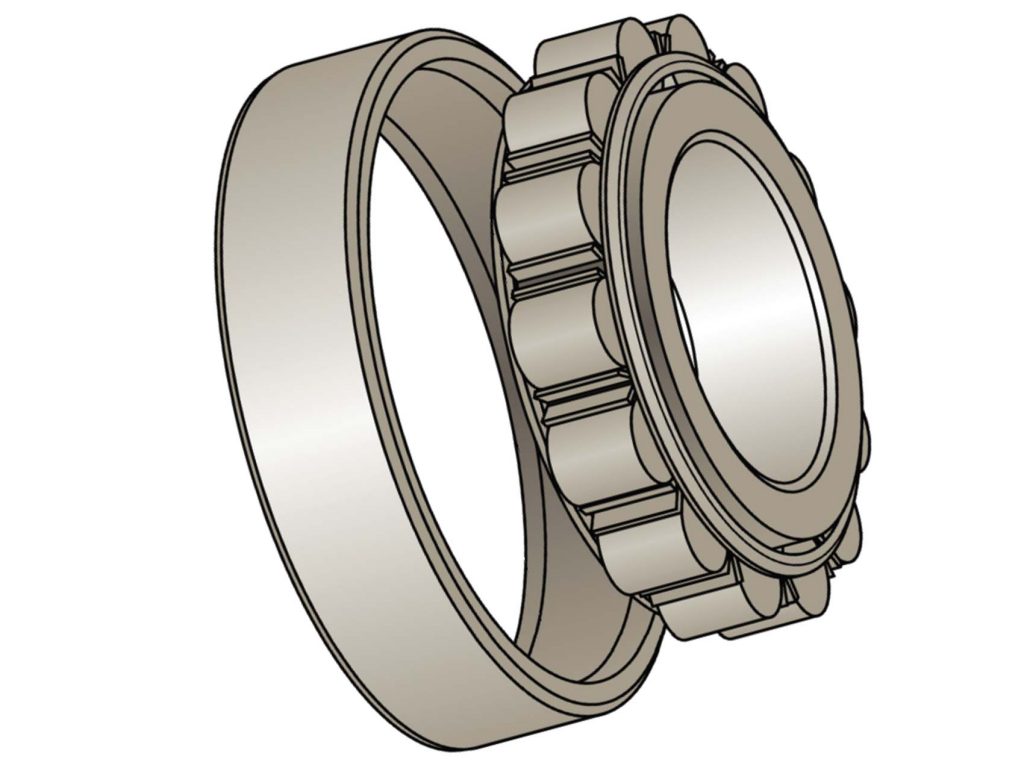 The roller bearing offers reduced friction over a plain bearing (bushing). However, it also does not handle axial loads, so a thrust washer must be placed in the system. Tampered roller bearings can handle thrust in one direction.

The most basic “plain” axle bearing design consists of nothing more that an axle shaft passing through a hole. Today the most common plain bearing design is a bushing. A bushing is usually made of a metal different from the axle or the housing. Typically made of brass or bronze, a bushing will use oil, grease, graphite or some other lubricant to combat friction. Plain bearings are inexpensive and they feature high load capacities. Unfortunately, the ability to handle extreme amounts of load is due to the larger amount of contact area. More contact area translates into more friction. As a result, you won’t find bushings used for axle wheel bearings on modern vehicles. 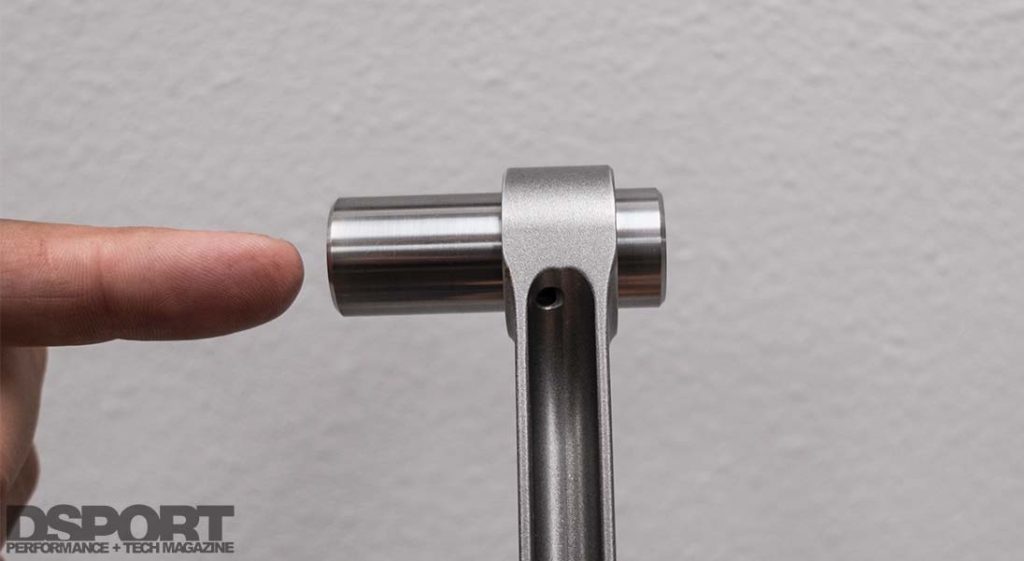 Axial or thrust forces are in the direction of the axis of the axle member. As this example shows, this bushing offers no resistance to these forces. Hence the axle must support the thrust by some other method. 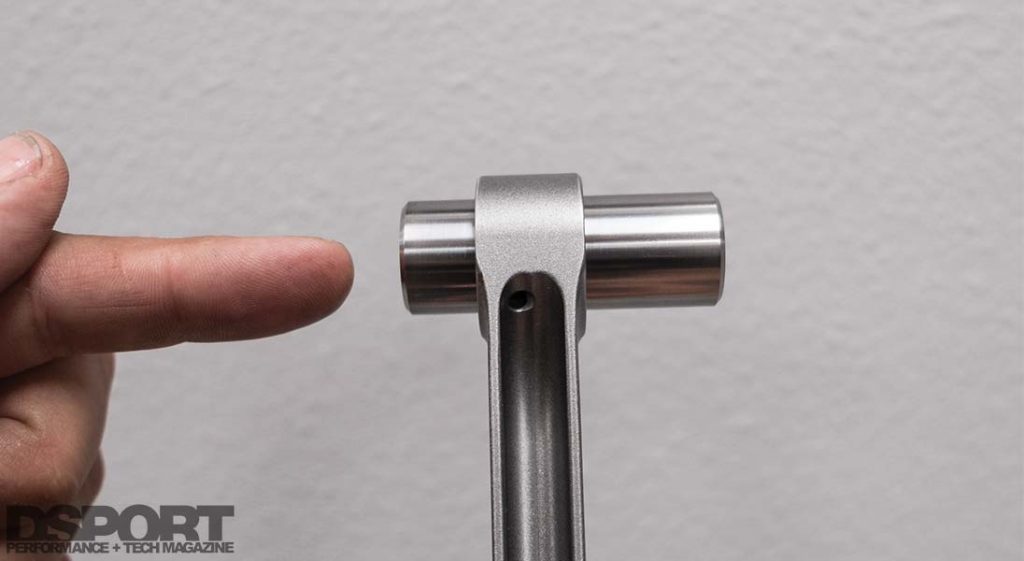 In this particular application. The piston clips secure the pin boss of the piston to control the axial loads.

While pairs of tapered roller bearings offer a significant friction reduction over plain bearings teamed with thrust washers, they are still establishing multiple lines of contact. Since the amount of contact area directly affects the amount of friction encountered, these “go-to” standard solutions are being replaced by the lower-friction design of angular-contact ball bearings. 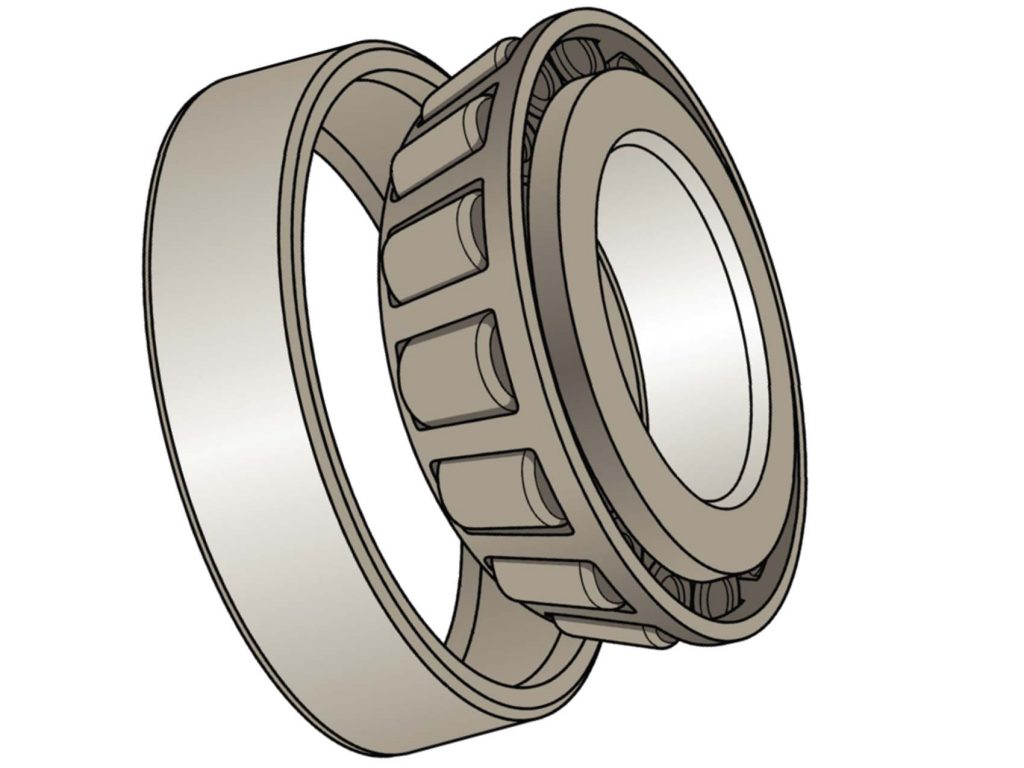 Tapered roller bearings, originally patented by Timken, were the norm for automotive wheel bearings for nearly 100 years. Today, angular-contact ball bearings are steadily replacing these in most applications. 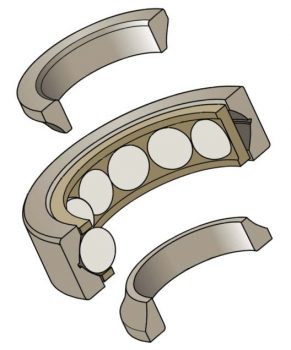 When everything is working as it should, the inner and outer races will have the same contact angle with the balls. When these bearings are over sped, the centrifugal forces on the balls will change the contact angle on the inner versus the outer races and failure is more likely to occur. While precision-ground stainless-steel balls have been the popular choice in most angular-contact ball bearings, there are advantages to silicon-nitride ceramic balls in high-speed and high-performance applications. 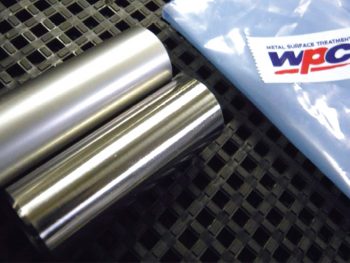 With a roller or ball bearing, there is always a line or point of contact between the roller/ball, the inner race and the outer race. As you might imagine, rough surfaces would tend to induce more friction than a smoother surface. However, this is only true to a point. If the two surfaces in contact are extremely flat and smooth and there are no contaminants between the two surfaces, it’s possible for the two surfaces to actually adhere to each other in a “cold weld.” This is why a micro-peened surface (WPC treated) will deliver less friction than a polished surface. 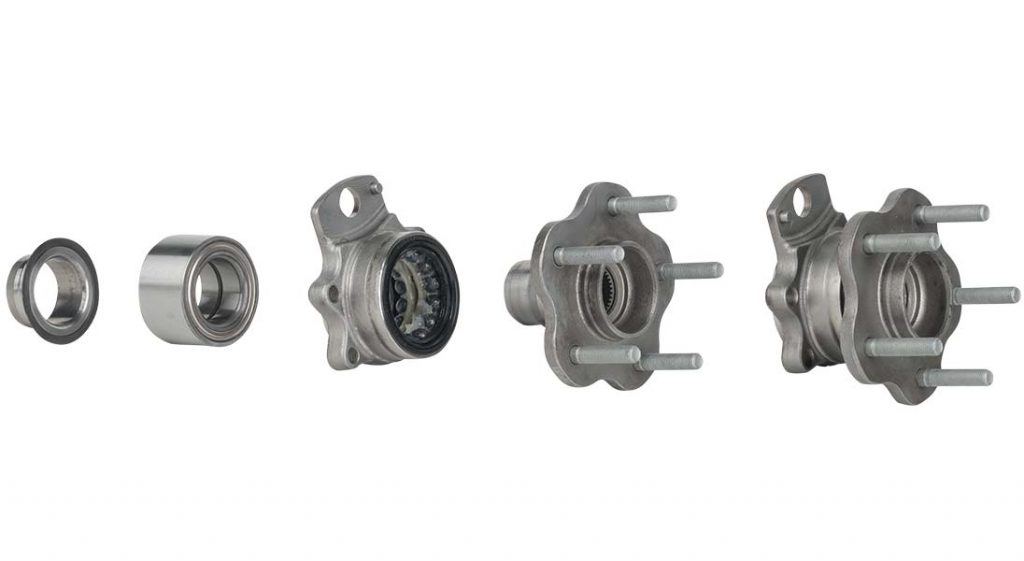 The components laid out here will be tested on the dyno with our R33 GT-R. Will the high-dollar ceramic angular-contact ball bearings deliver?

While racers are always looking for a way to cheat or bend the rules, there are stories of OEMs doing the same to register better EPA fuel mileage ratings. By switching from tapered-roller bearings to ceramic angular-contact bearings, there are stories of OEMs getting an additional 2 to 3 MPG on mileage-testing vehicles. While our sources wish to remain anonymous, there is no doubt that we’ve never been able to get a vehicle to deliver fuel mileage figures anywhere near the EPA advertised numbers. Hence, it is extremely plausible that the vehicles OEMs supply for fuel economy testing are “tuned” specifically to deliver great numbers. Reducing the friction in wheel bearings would be a great way to reduce the amount of energy wasted to overcome friction. 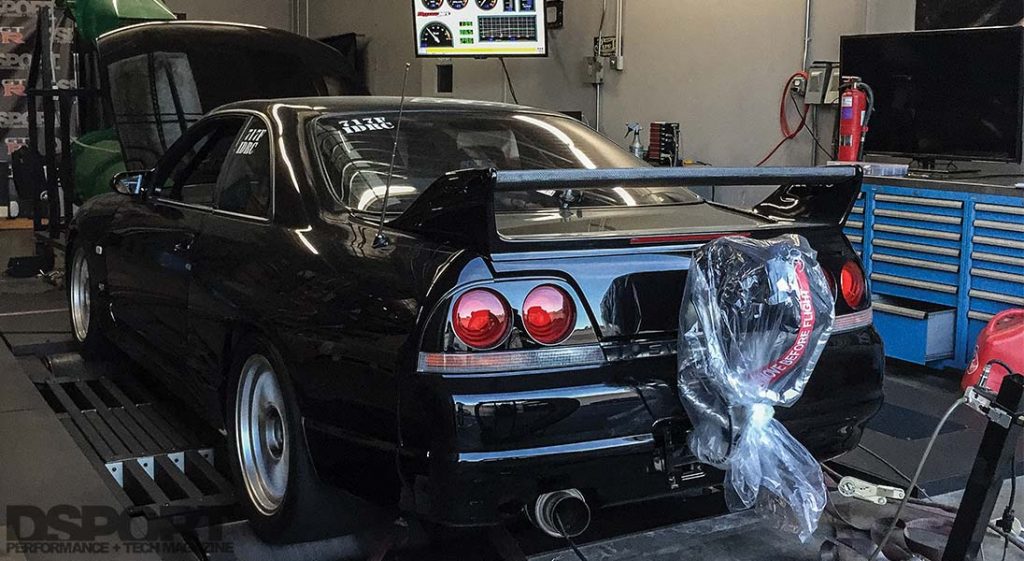 Let’s Test it Out

Today, a number of top racing teams utilize angular-contact ceramic ball-bearings on everything from wheel bearings to rear end pinions. Not all ceramic ball bearings are of the same quality. There are some that are complete crap for lack of a better word. So how much of a performance improvement can be realized with ceramic bearings? How can you select high-quality ceramic bearings? How much will it cost? These questions and more will be answered in Part II. We’ll measure the friction reduction, performance improvement and cost considerations in another DSPORT real world test. Stay tuned!