Drive-by-wire (DBW) throttle is a technology that  is hated by some and praised by others. Purists often claim that DBW throttle bodies disconnect the driver from the engine. They argue that throttle response is slower than a cable throttle and that the OEM uses DBW throttle bodies to limit the fun. While OEMs are always using control systems to limit the fun (usually to improve the safety of a vehicle), the actual measured lag between flooring that DBW pedal and getting full throttle at the DBW throttle body is usually somewhere between 30 and 80 milliseconds. While there are a few undeniable disadvantages to a DBW throttle system, the love for mechanical throttle systems may simply be some sort of euphoric distortion sensed by our bodies. After all, the actual throttle lag is just a fraction of the time it takes a human to blink (100ms). On the contrary, the potential advantages of DBW throttle systems are significant. These advantages can lead to increased performance, improved engine reliability and enhanced drivability. 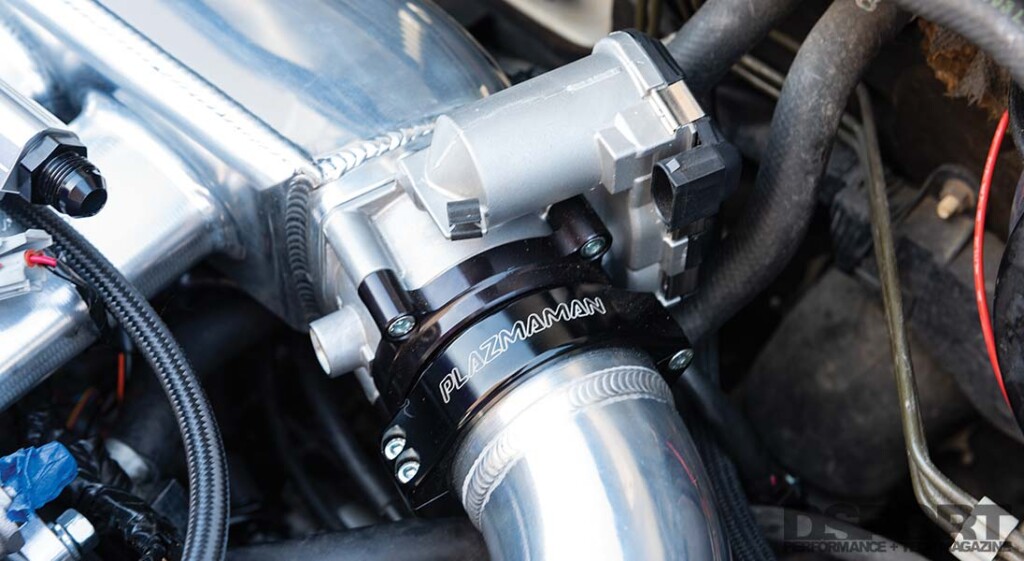 While nearly all modern vehicles have a drive-by-wire (DBW) throttle system, converting earlier mechanical systems to DBW is gaining in popularity. Most enthusiasts choose a Bosch electronic throttle like the picture above. These are available with 60mm, 68mm, 74mm and 82mm throttle plates to satisfy a wide range of applications.

Not a Fan at First 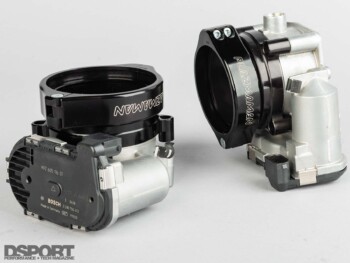 I was not an immediate fan of DBW throttle despite having an unintended acceleration issue on a mechanical throttle vehicle that could have killed me. My 1969 Camaro used a mechanical linkage throttle system (worse than a cable). When the left side motor mount failed over time, the engine was able to twist enough itself to pull on the throttle assembly opening the throttle even more. I was at a stop light and gave the car a regular amount of throttle input. The next thing I know the pedal pulls itself to the floor and the engine is at full throttle. Fortunately, I was the first car at the stoplight and I had enough time to push the transmission selector into neutral which eliminated the torque on the engine that caused it to rotate and pull up on the throttle. A cop witnessed what looked like an exhibition of speed away from the stoplight and quickly pulled me over. I was able to figure out that the motor mount broke and had the car towed home for repair. While some may think I would be a fan of DBW throttle due to the fact it eliminates this possibility, I definitely wasn’t sold when the first-generation systems rolled out.

One reason for a dislike by some for DBW throttle systems was the lack of performance from many of the first-generation OEM DBW throttle systems. While one might think that there are several performance enthusiasts among the many OEM automotive engineers in the world, the reality is that there are very few that are passionate about what we call performance. Instead, OEM engineers tend to focus on how a commuter uses a vehicle rather than how a DSPORT reader pushes a car to the limits. For example, many first-generation DBW systems lacked a launch mode. In fact, some had throttle limits set in such a way that you couldn’t even rev the engine to a decent launch RPM if the ECU detected that the vehicle was stopped. To meet minimum fuel mileage requirements, early DBW vehicles often had the pedal to throttle relationship programmed where the accelrator pedal didn’t appear to do much of anything until nearly floored. 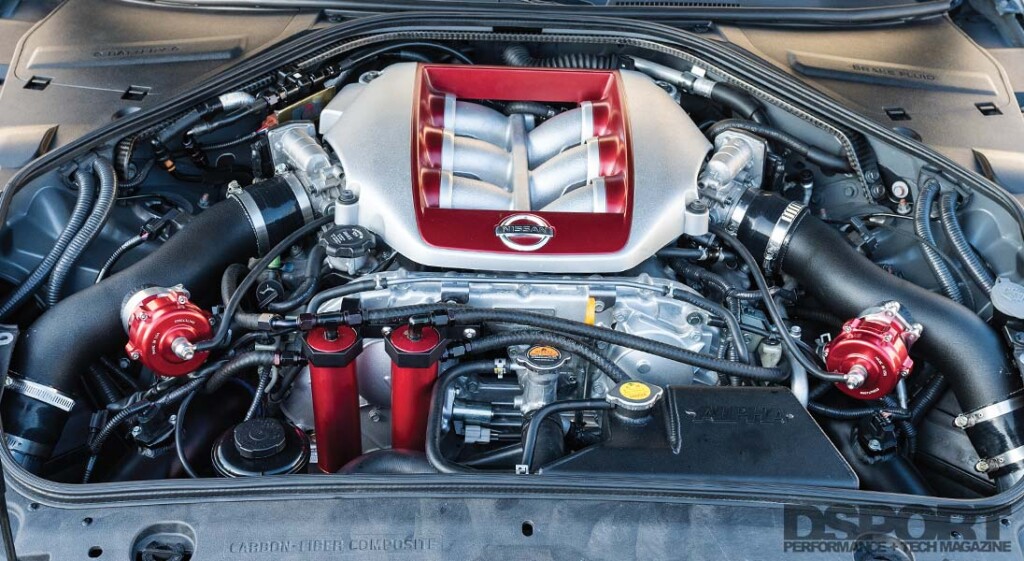 Unlike a mechanical throttle system, the “feel” of a DBW throttle system can be significantly changed by the tuning of the pedal input to throttle position maps. Early R35 GT-Rs had horrible throttle lag which was improved slightly between 2009 and 2011. By 2012, Nissan completely eliminated the perceivable throttle lag on the 2012 GT-Rs.

The reality is that a DBW throttle provides the opportunity to establish any number of relationships between what is happening at the accelerator pedal and what is happening at the throttle body. Personally, I remember how bad this relationship could be when driving the first R35 GT-Rs delivered to the States. You would mash the accelerator pedal only to wait what seemed like seconds before the throttle body would react. It was like one of those earlier versions of Windows that asked you 10 times if you were sure you wanted to do what you typed. “Are you sure you want full throttle (Y/N)?” Press “Y” again to get full throttle. Year after year, Nissan improved it to making it a non-issue by the time the 2012 R35 GT-R (DBA) was released. 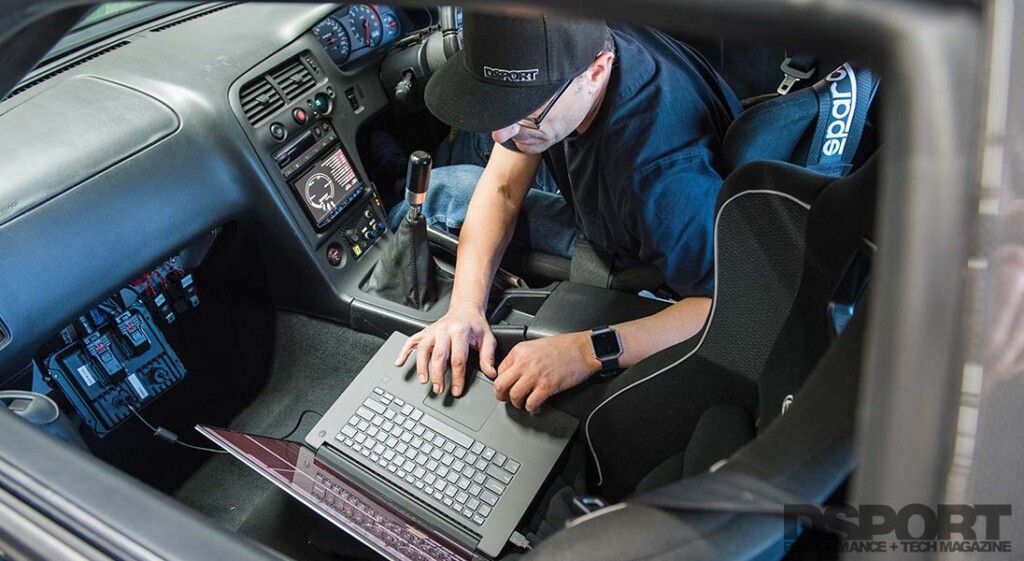 For peak performance of the DBW throttle system, the tuner must optimize the pedal to throttle relationship. 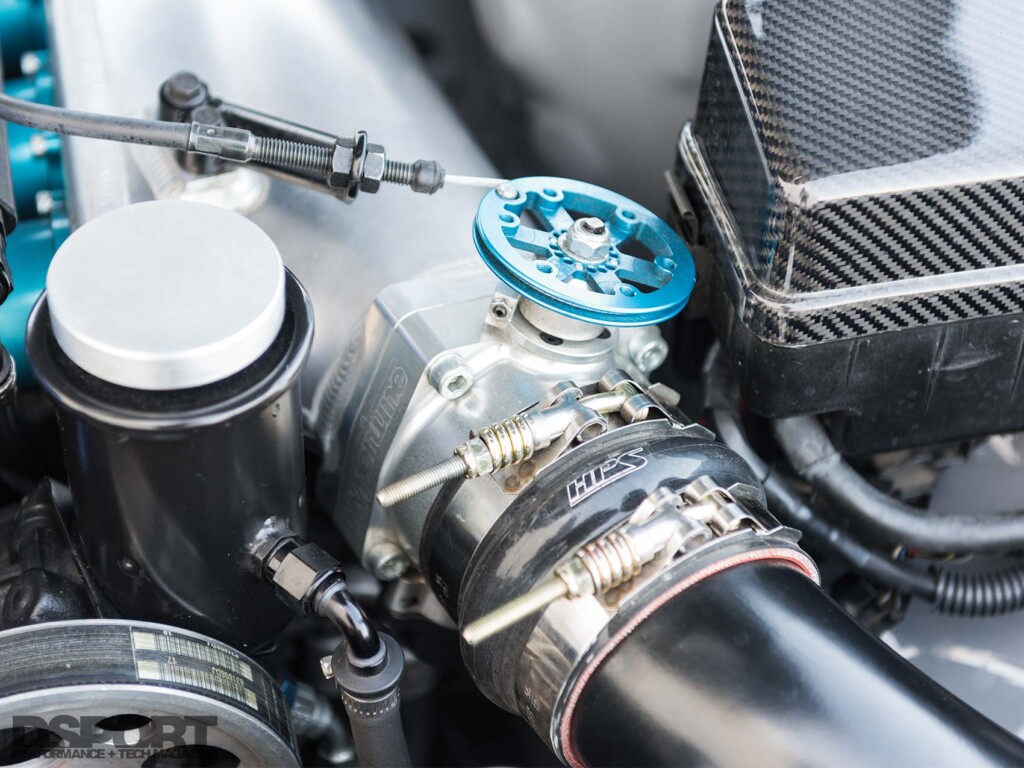 While a cable-drive mechanical throttle provides a barely measurable advantage in throttle response compared to a properly tuned DBW throttle, it simply cannot provide the features offered by a DBW throttle system.

Like the pedal assembly, the electronic motorized throttle body of the DBW system also features redundant throttle position signals. Most DBW throttle bodies have 6 wires. Two wires are used to control the positioning motor that opens or closes the throttle. Another two wires are used to supply the +5v power and ground circuit for the throttle body’s two internal TPS sensors. The final two wires are the signal outputs that report the throttle position to the ECU. Like in the case of the pedal assembly, if these two signals do not match, then the ECU knows that something is wrong and it can put the engine into a safe or limp mode until the problem is corrected.

In between the electronic accelerator pedal assembly and the electronic throttle body you will find the ECU in the DBW throttle system. It is how the ECU controls the throttle based on the pedal position information and the other inputs into the ECU that dictates whether the DBW system is accomplishing good or bad. While there are some hardware and processor speed parameters that can influence the performance of the DBW system, the firmware and tuning of the DBW tables will generally carry more weight in the end results. With some aftermarket ECUs allowing for custom firmware to be written, the possibilities for using DBW throttle systems for good (or evil) are simply a matter of the level of creativity and intelligence of the tuner.

The electronic pedal circuit is made up of two redundant pedal position sensors. The redundancy in sensors provides safety by ensuring that the actual pedal position is known by the ECU.

Because fans of high-fidelity audio are looking for a faithful reproduction of the recorded source material, laboratory testing and development of audio components often tests an audio component’s ability to take a signal and amplify it without adding anything that wasn’t there to begin with. With a theoretically perfect amplifier, the signal going in and the signal coming out are identical with the sole exception being the magnitude of the signal. Hence there is zero distortion. While this may be pleasing to the audio engineer in the lab, it may not “sound” the best to the listener. The reason is that some distortion or change to the output signal can sound better. Euphonic distortion is a term normally used to describe the warm tones that tube amplifiers add while amplifying the source signal. While a cable-based mechanical throttle system may emulate a system where the input and output signals are identical and in sync, it may not “feel” the best. On the contrary, a properly-tuned DBW throttle system can add some “euphoric”distortion to “feel” better while also delivering improved performance, reliability and safety. 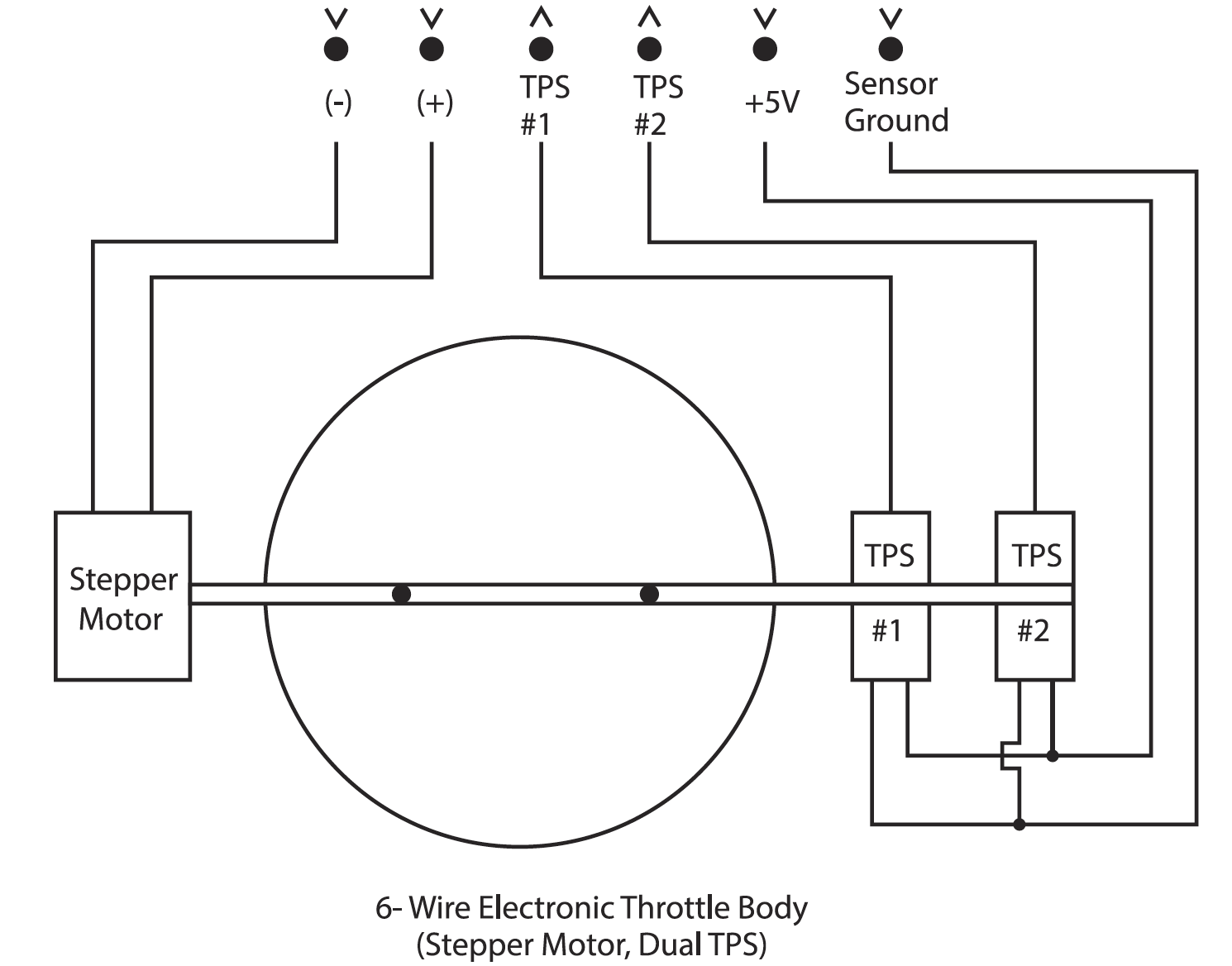 This diagram shows the overview of signal, power, ground and logic circuits on a typical DBW throttle system. The electronic pedal reports pedal position to the ECU while the throttle body communicates its throttle position to the ECU. The ECU supplies the power and ground circuits for all the position sensors and also provides the power to drive the positioning stepper motor in the throttle body. The programming in the ECU determines the relationship of pedal to throttle while constantly ensuring that all position signals are valid.