There are levels to this game! Most people start car projects because they finally bought their favorite cars, others just want to wrench on their vehicles, but the elite ones get into it to be the best. Joel Grannas of Grannas Racing bought this Supra for one reason and one reason only: to become the world’s quickest H-pattern car. With the record previously held by Boostin Performance’s Red Demon, Joel knew he had extremely large shoes to fill. Since smooth seas never made skilled sailors, the Red Demon was the tsunami that Joel had to go through in order to become the most skilled H-pattern captain. 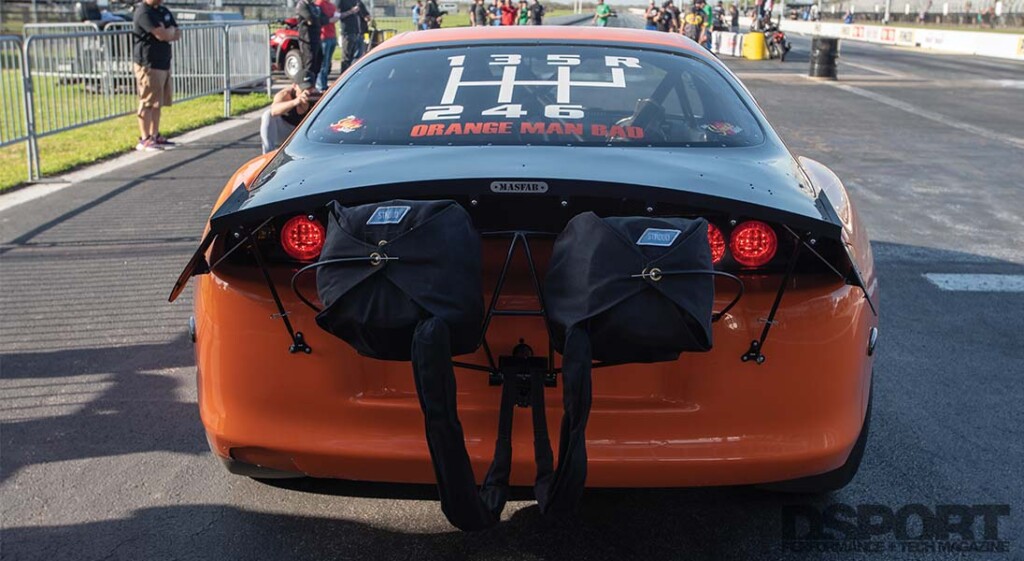 Joel Grannas was no stranger to the Toyota Supra. After racing one for nine years, he was looking to build a new Supra. “I was specifically looking for a hardtop shell to turn into a racecar,” said Joel Grannas. With this being a purpose build, Joel needed the rigidity and lighter construction that the hardtop version provides. After some searching around, Joel found this car in Buffalo, NY as a bare shell. “The car was in multiple pieces, I basically bought a car that was in boxes,” said Joel. While most people would be discouraged when buying a car in boxes, this was exactly what Joel wanted. “It was cheap, bare bones, already torn apart, and a low-cost investment – the perfect car to turn into a race car.”

The car was being built as a record chaser. For many years, Joel chased the six-speed record in his previous Supra. It was a street car with a synchro V160 transmission. With the previous setup, Joel ran 8.17-seconds at 186 mph. “I always said to watch out if I ever build a real race car,” said Joel. The initial goal was to get the rear-wheel drive H-pattern record, then go for the bigger record. The end goal would be the world’s quickest H-pattern car, period. At the time, the record was being held by the Red Demon owned and raced by Boostin Performance, which had run 7.04-seconds in the quarter-mile. To accomplish the first goal, Joel would have to run 7-seconds, which would open up the way to the bigger and better record where he would run in the 6-seconds. 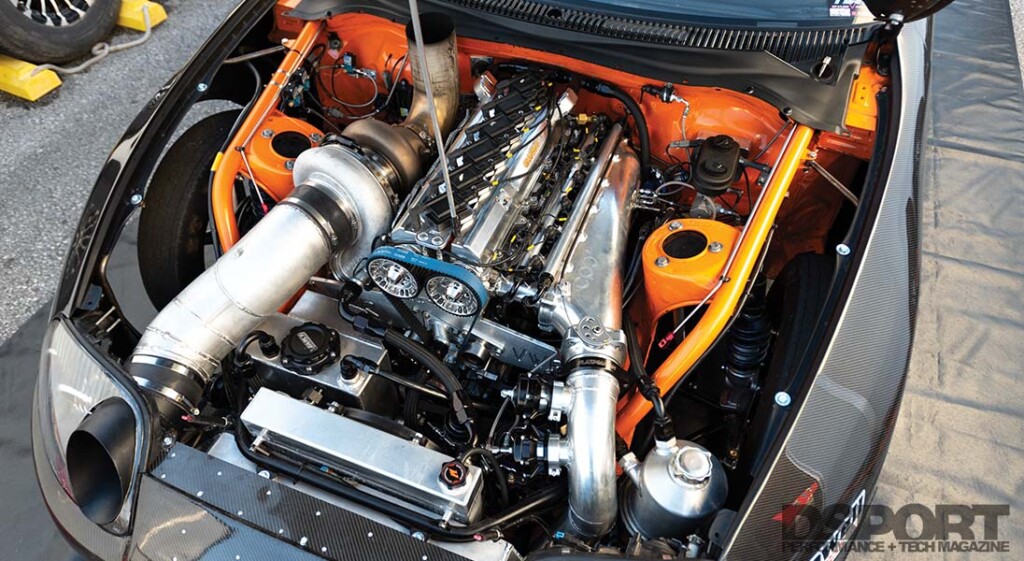 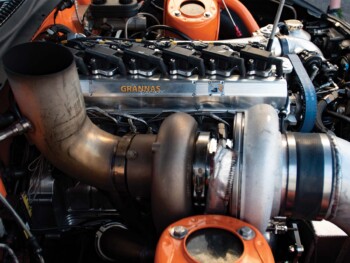 With a Bullet Billet wet block as the foundation, the final displacement came to 3,137cc. A Precision Turbo Promod 102mm turbo equipped the billet engine. The significant amount of air charge increase is matched in fuel by a custom Waterman fuel pump feeding Fuel Injector Clinic 2,150cc injectors and 550-pound billet atomizers with M1 Methanol. When running at 70 psi of boost, Grannas Racing’s Supra delivered 2,100whp and 1,400 lb-ft of torque. A huge part of Joel’s success is the quality parts that he builds through Grannas Racing. He equipped his Supra with his GR1000F transmission kit, his ultimate IRS rear subframe, as well as his ultimate IRS lower control arms and anti-roll bars. “I used to catch so much flack when I first developed the T56 kit,” said Joel. “People said, ‘why are you going to put a Chevy transmission in a Supra?’ Now, it’s common to see my kits in numerous import chassis. I’m glad I stuck with it and built up Grannas Racing to the level it is now.” With this combination, it was time Joel Grannas put the Supra to the test to see how close he was to his initial and main goals. 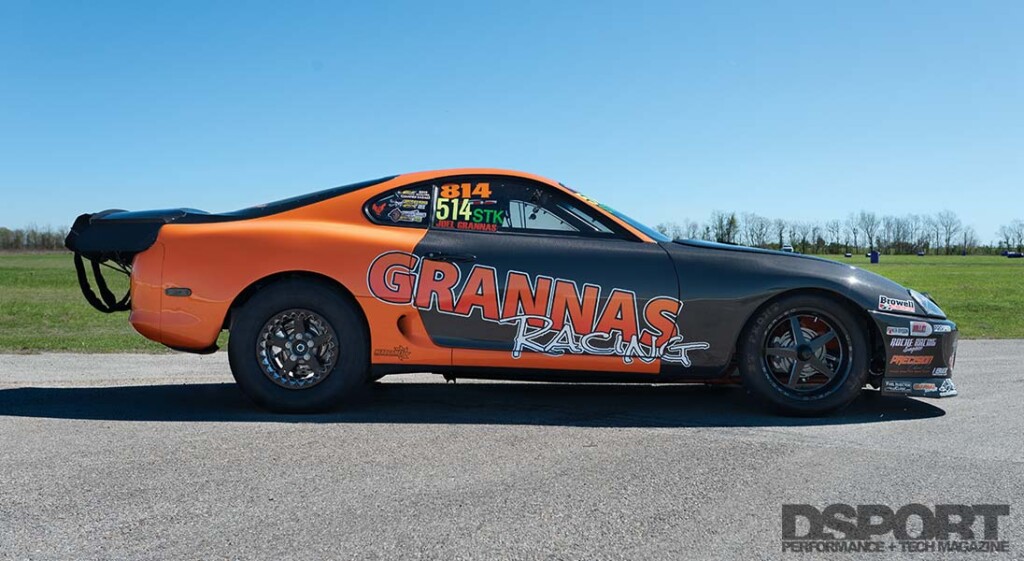 “We had a lot of struggles at events where we thought the car should do well, but it’s not easy to try and get a small displacement, big turbo, IRS, radial tire car to be consistent,” said Joel Grannas. Once on track, Joel was able to run 7.68-seconds on the quarter-mile. This was done on a diaphragm clutch, so Joel knew there were massive improvements to be made with an adjustable clutch setup, which led him to run low 7-seconds consistently. “Once I saw that the six-second zone was within reach, a fire grew inside me and we started really pushing the car harder and harder,” said Joel. With the car set up to Joel’s liking, it was time to tackle The Reunion event at Bradenton. “It was Epic!” he said. “I never thought it would happen, but we got all of the stars to align and the car came out straight and was on a perfect pass.” That day, Grannas Racing’s Supra ran 6.90-seconds at 194 mph. “The miles-per hour was low because the car shut off around the eleven-hundred-foot mark,” Joel explained. Since then, he was able to run 6.84-seconds at 215 mph and 6.99-seconds at 209 mph. “As of right now, there is still no other H-pattern cars to reach the 6-second zone.” 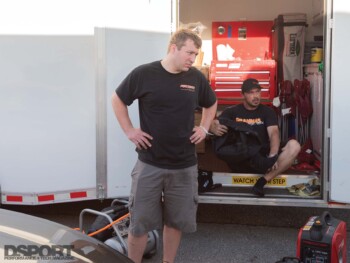 Thank you to my crew chief Rob Courtney, and the rest of my crew (DJ and Cliff). Thank you to Doug, Jeff, and the whole team at Precision Chassis for the amazing work to make this crazy guy’s vision for an IRS 25.3 car become a reality. Thank you to Chris Delgado at ProSpeed for tuning this car and wanting this record just as bad as me! Brian Roche for keeping these motors reliable at these power levels. Dave at Headgames Motorworks for making everything sing at 10,000+RPM. Thank you to Liberty’s Gears, Precision Turbo, GSC Power Division, Driveshaft Shop, Jason Schmuck, Bullet Race Engineering, Precision Racing Suspension, Fuel Injector Clinic, Boninfante Friction, Browell Bellhousing, Buck Performance, and so many others for being part of this team! 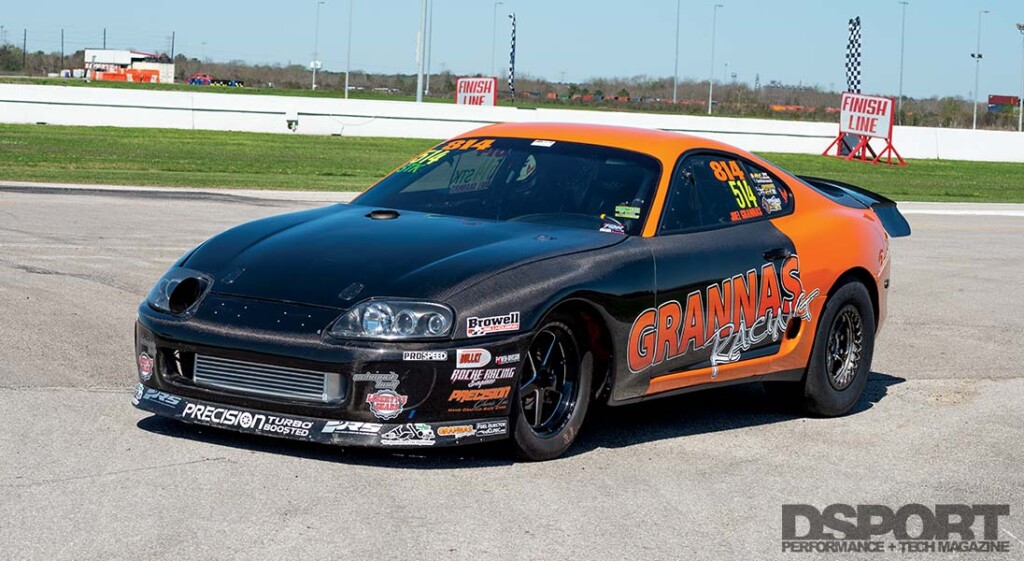 As if becoming the world’s quickest H-pattern car isn’t enough, Joel is now going after the overall IRS with a stick shift record. “I think it would be crazy to take down an automatic car’s record with a true H-pattern manual-shifted car,” he said. “The record is owned by Mark Carlyle’s Corvette with a 6.58 ET.” While Joel is proving Grannas Racing’s products on the track, he is even more proud of pushing the Supra platform in front of all stick shift cars. The Supra proved the effectiveness of Grannas Racing race transmission kit, as well as the IRS suspension system they offer. While you may think Joel wants to stay on top, he is actually rooting for all H-pattern racers to catch up. The competitiveness is what pushed him from the beginning to pursue great things and he wants to keep this fire alive. The result will be better, track-proven parts that speak louder than a 2,100whp 2JZ engine bouncing on the two-step.