Over the past decade, the Mitsubishi Lancer Evolution has proved capable of achieving great things. While originally intended for rally racing, the EVO has become a drag strip monster. Thanks to the capable 4G63 engine and the all-wheel drive system, the EVO is now in the 7-second territory and continues to evolve on drag strips around the world. With its rising popularity, the Mitsubishi EVO 8 and 9 have become extremely valuable and hard to find. Edison Miller Jr. realized the potential of this platform and decided to build one himself. Here’s how this EVO build escalated from a daily-driver to a drag strip animal. 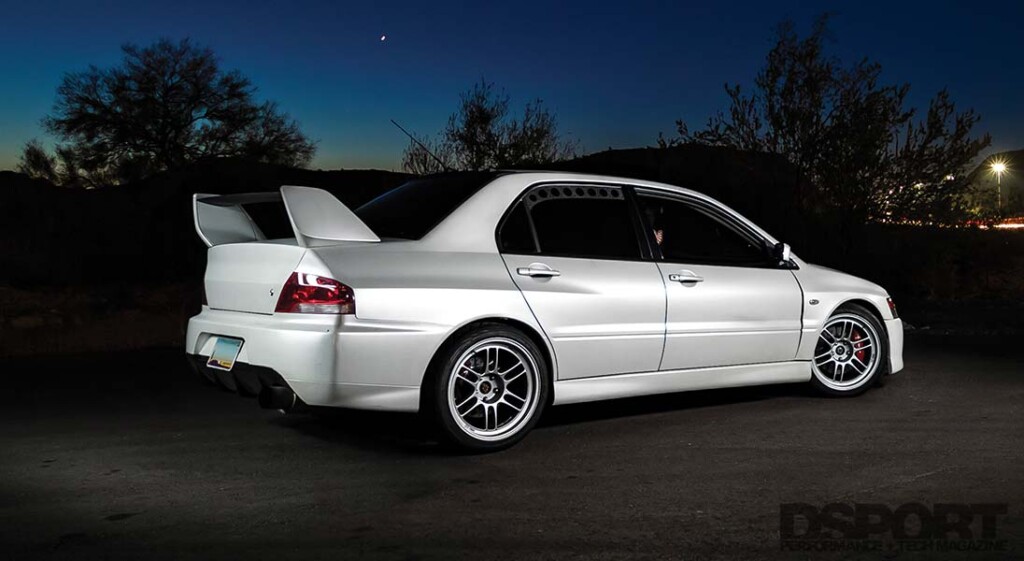 Most times, EVO owners either had EVOs before or always wanted one, and this was no different for Edison Miller. “I’ve always wanted an EVO, and you can’t go wrong with a 4G63,” said Edison. “It kind of fell into my hands.” In 2014, Edison finally pulled the trigger and bought this 2006 Mitsubishi EVO IX GSR in Gilbert, AZ. Upon purchasing the EVO, Miller loved everything about it, except trying to keep the original black paint clean. If you’ve owned a black car, you might’ve enjoyed its sleek looks, but you definitely experienced the difficulty of taking care of such color. With the car in his procession, it was time Edison Miller started planning the build while daily-driving the vehicle. 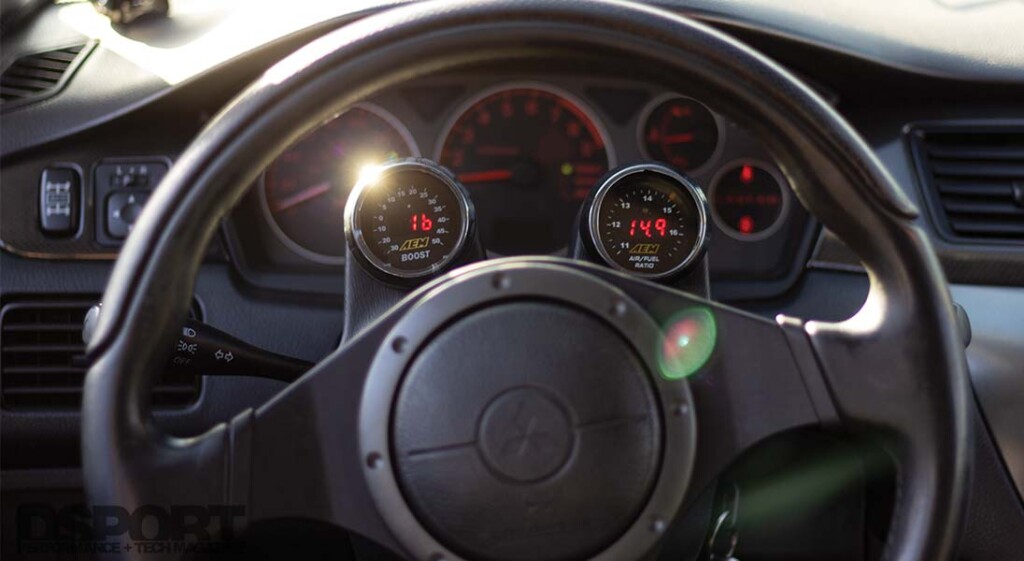 “To be honest, there weren’t really any goals – it kind of just escalated to what it became,” said Miller. While big goals were never made, Edison wanted to build a reliable street car. While he wanted to daily-drive the EVO, he wanted to have fun doing so. This meant Edison had to chase more power. The original vision was 500whp while maintaining the integrity of the car and the capability of going to the track any time. “The goal was to make it unique, try different things so it’s not comparable to other EVOs, and do out-of-the-ordinary things,” said Miller. With the initial vision in mind, Miller dove into the project and started the work. 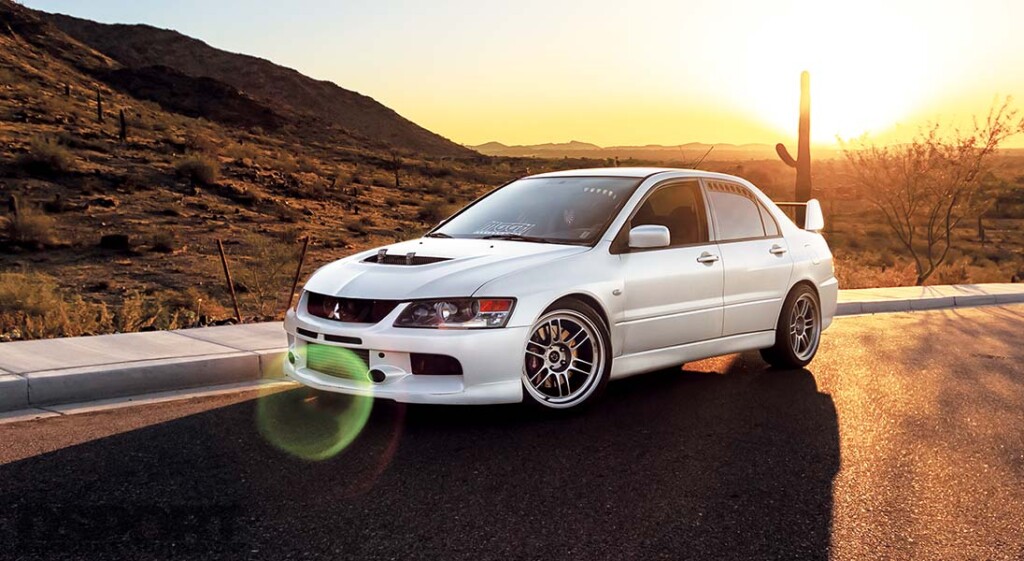 The modification path started with some bolt-ons, but after some vacuum lines needed fixing, Miller ended up throwing a rod through the block. “I figured I either put another stock block with bolt-ons back in it, or fully build a motor. At this point, I might as well build the engine,” said Edison. With the bigger, built engine, things started to look more intriguing, and what started as a small turbocharger ended up getting a bigger one. The increase in power and torque led Miller to the decision of going with a dogbox transmission to match the more capable engine. The evolution in the build is the best thing that could happen to a car enthusiast. Gradually building a project allows the owner to be in-tune with his car, and the amount of knowledge you get when you’ve experienced your car at various modification levels is simply priceless. 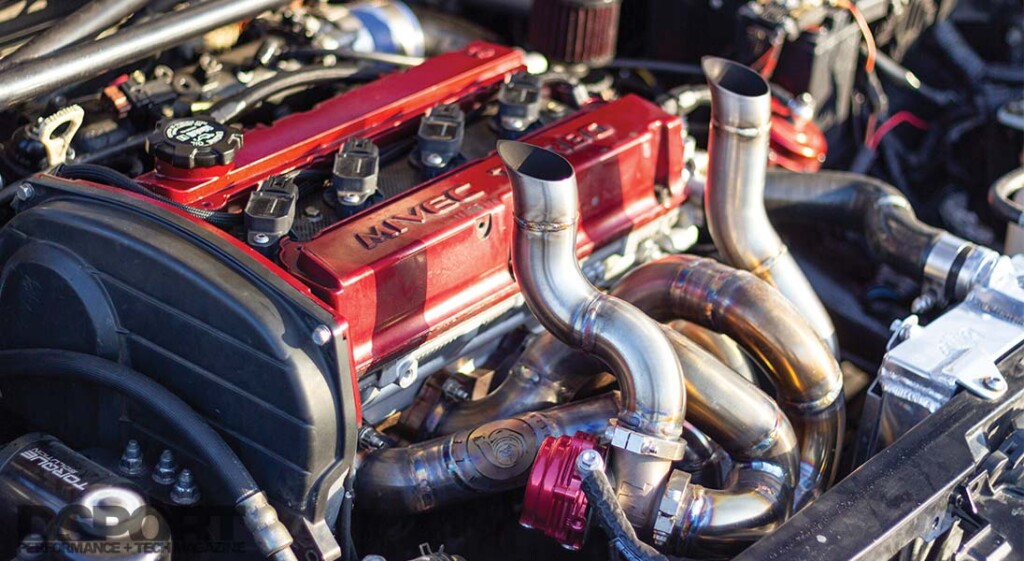 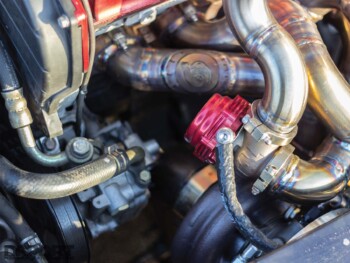 Miller turned to MoonPerformance where Elijah built the engine, while David from DB Trans built the dogbox transmission. “These guys make magic happen; they’re excellent at their crafts and profession in every way,” said Miller. As with any car build, this one wasn’t free of hiccups and obstacles, but the team was able to overcome them and reach the level Miller aimed for as his vision evolved. To reach that next level of performance, Gen 2 Automotive Machine bored the cylinders to .20 over, making the final displacement 2,429cc. The entire engine was equipped with quality internals, then a BorgWarner EFR 8474 turbocharger was introduced to the mix. To support the increase in charged air, a Buschur Racing Walbro 225 double pumper was installed feeding Fuel Injector Clinic 2,150cc injectors with E85 ethanol/gasoline mixture from the pump. The result was 781whp at 7,797 RPM and 644 lb-ft of torque at 5,562 RPM when running at 40 psi of boost.

Proof in the Pudding

When you’re pushing almost 800whp, things could start breaking. However, this engine is nothing but quality. After six years of hard driving, Miller’s EVO is still running strong with the same setup. The previous setup resulted in an 11.8-second run on the drag strip, but the new combination hasn’t been to the track yet. “The motor is six years old; that’s an achievement in itself,” said Edison Miller. “For a motor to last six years, go through three turbocharger kits and a dogbox transmission, that says something.” Through all of the engine setups, the rebuild, and the different combinations, Miller got to learn so much about this platform and what works, more importantly, he now knows the best way to approach a car build from scratch now that he’s been through it all with this EVO. 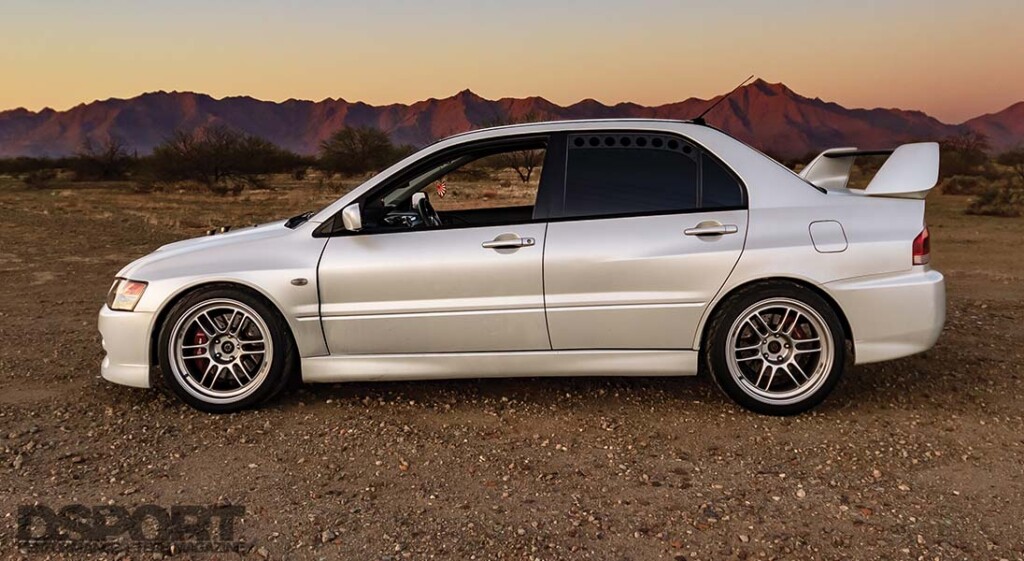 After six years of hard driving, Edison Miller plans on building a new motor to get the car to the next level. “Future modifications are undetermined at this point,” he said. However, a tubular subframe and a stronger rear differential are possibilities. After the ups and downs with going from one setup to the next, Miller believes it would’ve been best to go to the current setup from the start. This means that planning ahead and building a clear vision before turning any nuts and bolts is the way to go. More importantly, he advises everyone to pursue their dream regardless of what anybody else thinks. When building a car, you can get a million opinions, but what matters is what you truly want. Anything different will eventually cause you regret. “Let your hard work and dedication speak for themselves.”