When you consider that a belt-driven supercharger might need 80 or 100 horsepower to compress enough air to allow your engine to make 600 flywheel horsepower, it’s not surprising that the 6-rib belts used to drive the supercharger may experience some slippage. The amount of slippage is dependent upon the compressor speed, the size of the pulleys used, the type of belt used and the surface roughness of the pulley. Simply changing from one line of belt to another (same manufacturer) delivered as much as a 59 horsepower gain at the wheels or sometimes as little as 3.0 horsepower at the wheels. Processing the drive pulley to have a rougher surface sometimes added nearly 10 additional horsepower while other times no additional power was realized. Running the shortest belt that would fit consistently delivered a few more horsepower. Identifying slippage and selecting the right strategy to eliminate slippage is the key to realizing peak performance from your belt-drive supercharger. 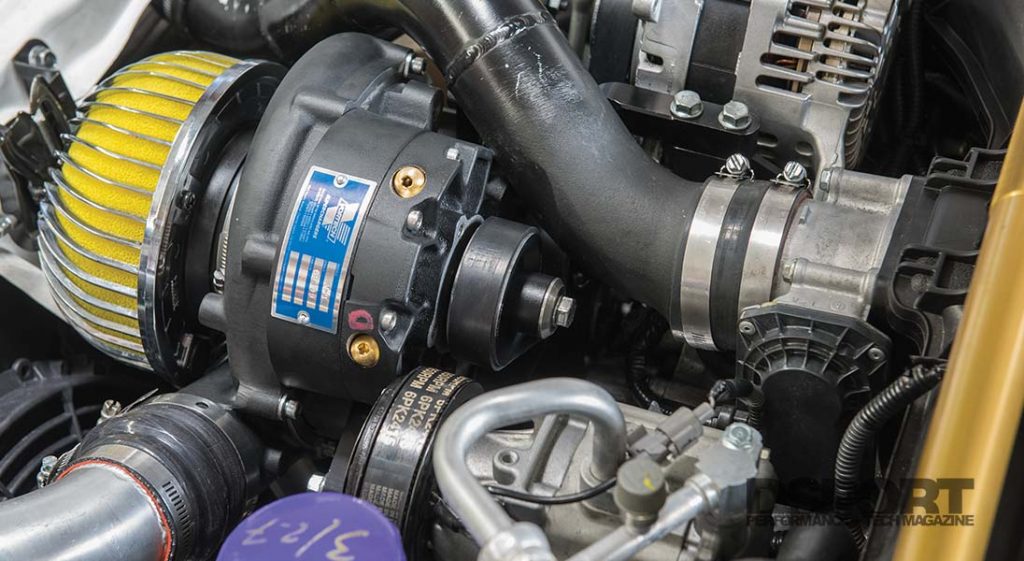 Sometimes slippage is easy to identify and other times it isn’t so easy to find. When belt slippage is extreme, black dust from the belt can sometimes be found on and around the engine. The key word here is “sometimes.” If you have an effective fan system in place, it’s entirely possible that all of the belt dust gets blown away never to be found. Another possible telltale is the temperature of the belt. When slippage occurs, the temperature of the belt will increase. Of course, only check the temp of the belt with the engine off. If you cannot hold the belt continuously for more than five seconds, chances are that the belt is slipping enough to build up a significant amount of heat. Due to heat cycling of the belt and general wear, the ability of the belt to be able to maintain its level of grip will diminish over time. Sometimes the belt itself will become glazed or cracked. If you notice that over time your peak boost has dropped more than 1.0psi, it’s probably time to change your belt. 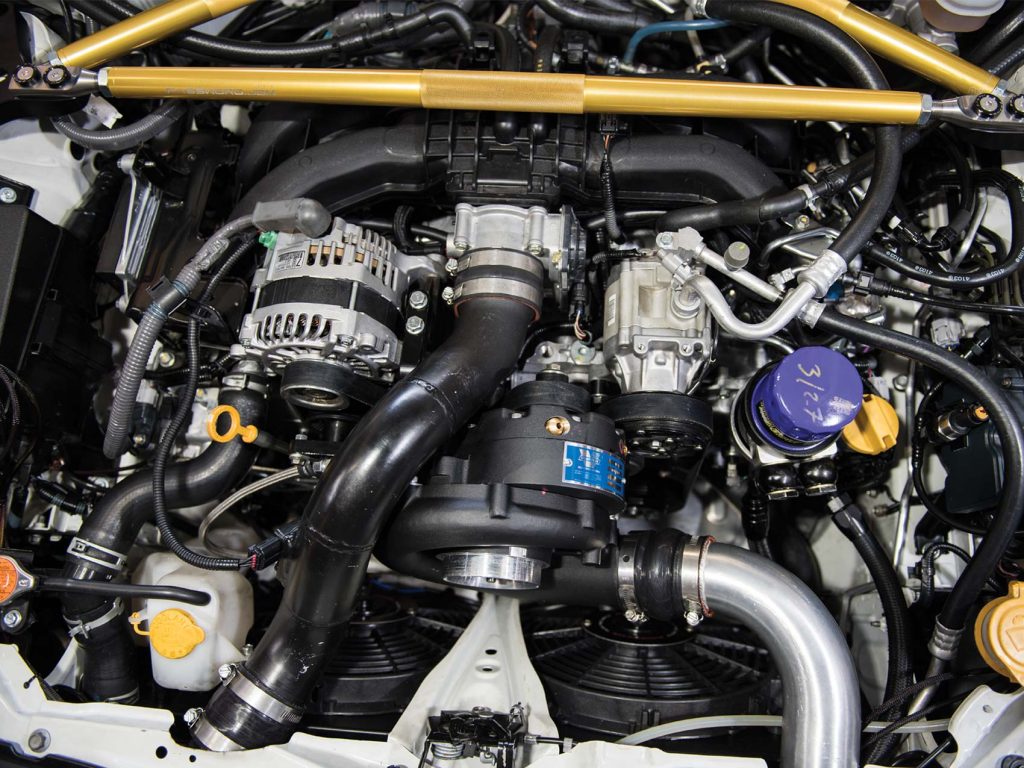 Proper amount of contact, belt tension, and level of friction are critical to eliminate belt slippage.

In order for a belt to experience zero slippage on the pulley, there needs to be an adequate amount of contact, the proper amount of belt tension and a level of friction high enough to prevent the slipping. The amount of contact on the pulleys is determined by the design of the supercharger pulley system and cannot be changed in most cases. Here you have to hope that the supercharger company did its homework correctly. If there are static idler pulleys that have adjustable positions, always position these to maximize the contact at the crankshaft and supercharger pulleys. As for belt tension, running the shortest possible belt that works with your pulley combination will extend the amount of time there is adequate tension on your belt. Belts will stretch over time and when they are used longer than necessary, the tension on the belt may drop off significantly as the tensioner reaches the end of its travel. Finally, the friction between the belt and pulley will have a major effect on slippage. Using a belt specifically designed for superchargers, like the Gates RPM belts we tested, proved to increase the friction between the belt and pulley. The additional friction reduced belt slippage increasing boost and horsepower output. We also tested the Carbinite process which dramatically increased the grip from the pulley to the belt.

We had a total of four pulleys and three belts for our test. Two of the pulleys were the 2.87-inch size (20 psi) and two were the 2.62-inch (22psi sized). We had one of each size pulley treated to the Carbinite process. This process strips off the original hard anodizing and applies a high friction surface that has the look of rolling the pulley in sand after coating it with glue. It’s aggressive but it obviously puts a bite into the belt. As for the belts, we had the standard belt Gates Micro-V (K060962) and RPM belt of the same length (K060962RPM). 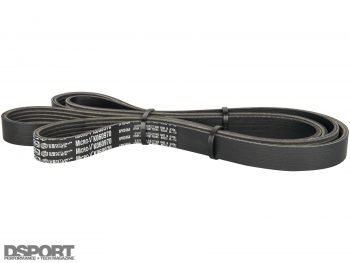 Gates recently introduced a new line of serpentine belts specifically designed for supercharger applications dubbed the Racing Performance Muscle or RPM series. These belts use a high stiffness Aramid and Polyester tensile cord. This tensile cord is supported by a nylon-fiber undercord with two layers of gum adhesion layers. The result is a belt that maintains more tension on the pulleys with a higher level of friction. These belts will stretch significantly less than a conventional polyester belt. While we did not see any issues on our setup, we have heard reports of these RPM belts being susceptible to breaking when excessive tension is applied. Since our setup only has the automatic tensioner, we never had a Gates RPM belt break.

Our lowest performance increase with the RPM version of the standard length belt occurred on the 2.87-inch untreated pulley. In this configuration, boost was only increased by 1.2psi. The additional power realized was 5.5 horsepower. With the 2.67-inch untreated pulley, the performance increase was astounding. The standard belt was only able to realize 14.6psi of boost while the RPM belt took boost to 22.2psi. Peak power increased from 408.7 to 467.7whp, a gain of 59 horsepower from a belt change.

On the 2.87-inch pulleys, the Carbinite processing had some unexpected results. Both boost and performance were slightly down compared to the non-treated pulleys with either type of belt. This made little sense. Perhaps the actual diameter of this pulley was on the larger size of the tolerance and the non-treated pulley was on the smaller side of the tolerance.

The Carbinite process definitely seemed to work better with the softer standard Micro-V belts instead of the harder and stiffer RPM belts. The one belt failure that did occur during the testing was with the Carbinite-processed pulley teamed with an RPM belt. The Carbinite pulley literally chewed the RPM belt to shreds. Based on our results, we would recommend that the Carbinite-process pulleys only be used with standard Micro-V Gates belts (or their equivalent). It may also be better suited to only use during competition use in order to extend belt life. According to Carbinite, belt alignment is key when using Carbinite-treated pulleys. Even the slightest amount of misalignment can tear up your belt quickly. 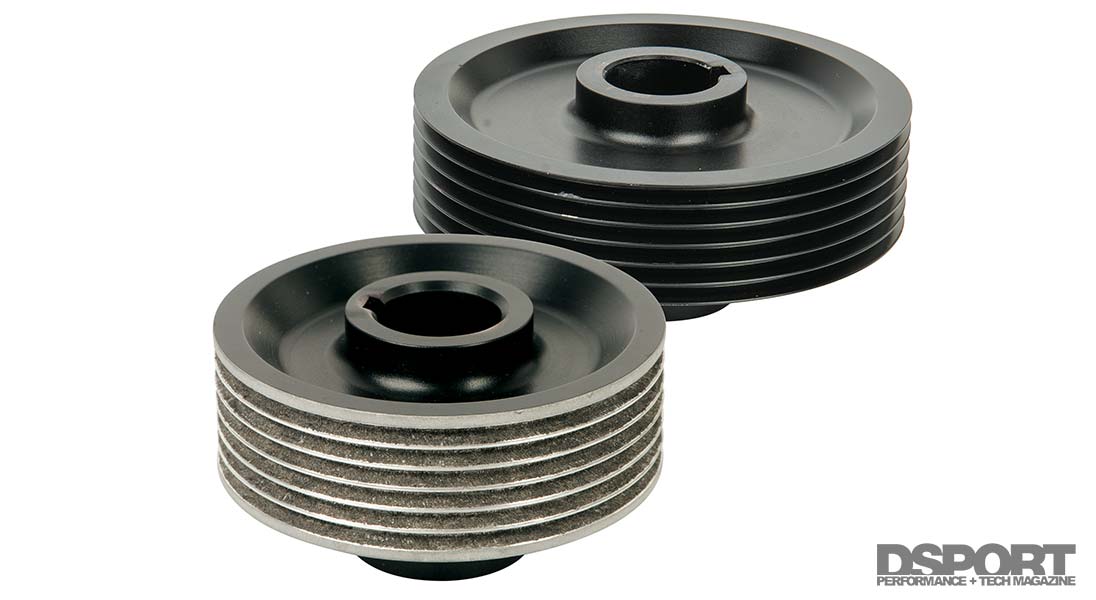 It’s not pretty, but the Carbinite treated pulley added 62whp when teamed with a standard Micro-V 6-rib belt. It didn’t seem compatible with the RPM belts though.

If you have a belt-driven supercharger, the Gates RPM belts are definitely worth a try. They may add a few horsepower or a bunch depending on how hard you are spinning the supercharger. The Carbinite processing may also be a great solution to end slippage with your setup. The key is to maintain proper belt alignment and use the standard belts with the Carbinite pulleys for maximum belt life. Since the Carbinite process can be tough on belts, be sure you carry a spare belt until you see how long your belts will last. It is also highly recommended that you purchase a second pulley for treatment in case the Carbinite is too hard on your belts. While every supercharger system will be different, having different belt and pulley-treatment options should allow you to select a combination that delivers the performance and reliability that you desire.