What is horsepower? If you are into performance, you may only know that it’s a good thing and it never hurts to have more. If you appreciate the science, you may know that one horsepower is the energy transfer rate required to raise a 550-pound object by one foot every second. It’s often incorrectly stated that “heat is horsepower.” While a false statement on its own, the reality is that the control of the transfer of heat (a form of energy) can be used to produce the type of tire-smoking horsepower that we crave. Employing the latest generation of thermal barrier coatings in the right places can deliver measurable performance benefits. These benefits can include increased power and torque, improved turbo response and decreased load on the engine’s cooling system. Let’s take a look at the physics behind the technology and the current application trends. 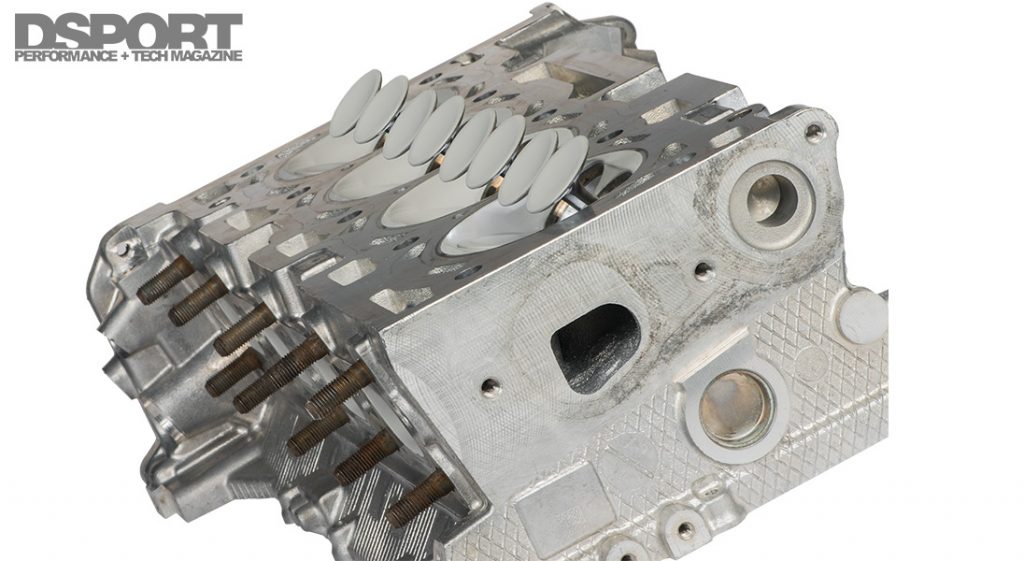 The spark-ignited internal combustion engine in your vehicle is an energy converter in the most simple terms. The engine takes the chemical energy stored in the fuel and it converts it to kinetic energy at the flywheel. However, only about a third of the chemical energy in the fuel gets turned into horsepower. So what happens to the majority of the energy stored in the fuel? It gets wasted. The majority of the energy released during the combustion process is wasted as heat. The hot exhaust gasses contain about 50-to-65 percent of the total amount of wasted heat energy. The cooling system soaks up 25-to-33 percent of the wasted heat energy while the energy required to overcome friction uses up about 5 to 10 percent of the wasted energy. 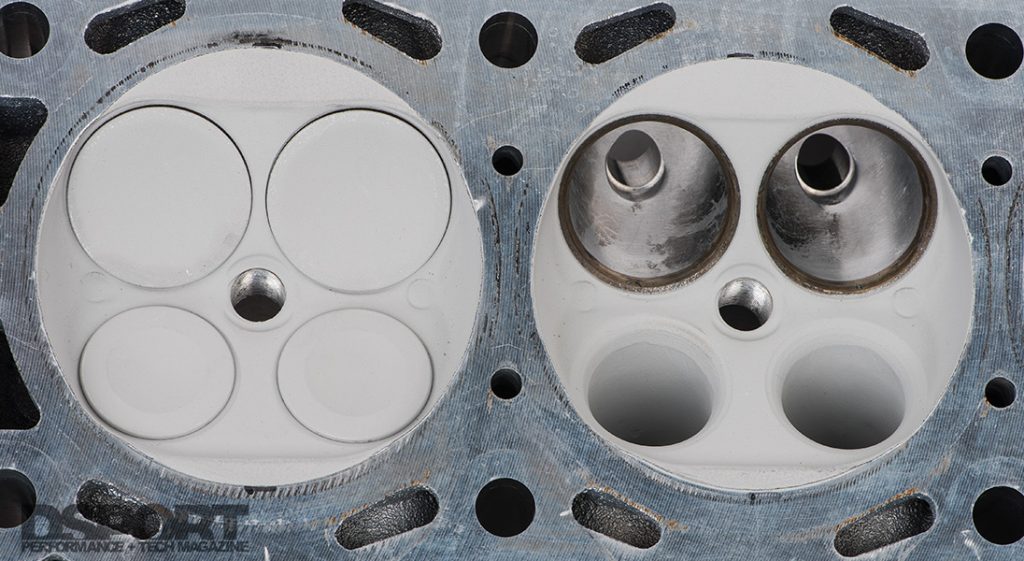 On turbocharged applications, higher exhaust energy improves turbo response. For those applications, coating the exhaust port ensures that more heat and energy is delivered to the turbine. The TBC coating must be cut, ground or lapped off the valve seats before reassembly of the head.

So is there a way to recover some of this wasted energy? Yes, and you are probably familiar with one of the more popular devices. A turbocharger captures some of the waste exhaust energy and turns it into work. The turbocharger takes energy from the high-enthalpy exhaust gasses and uses them to drive a turbine. If you think of the gasses as a stream, the turbine acts like a paddle wheel to capture the momentum of the particles in the stream to turn a shaft. This shaft is shared with a compressor that ingests air at atmospheric pressure and compresses it to a higher pressure. This supercharged air can fill the cylinders with more air and fuel than normally possible without forced induction. The result is that a small displacement engine can deliver up to 7 times its normal output. Best of all, the energy required to compress the charge air is not stolen from the engine’s crankshaft (as with a supercharger). Instead, the energy to power the compressor is extracted through the heat energy in the exhaust. 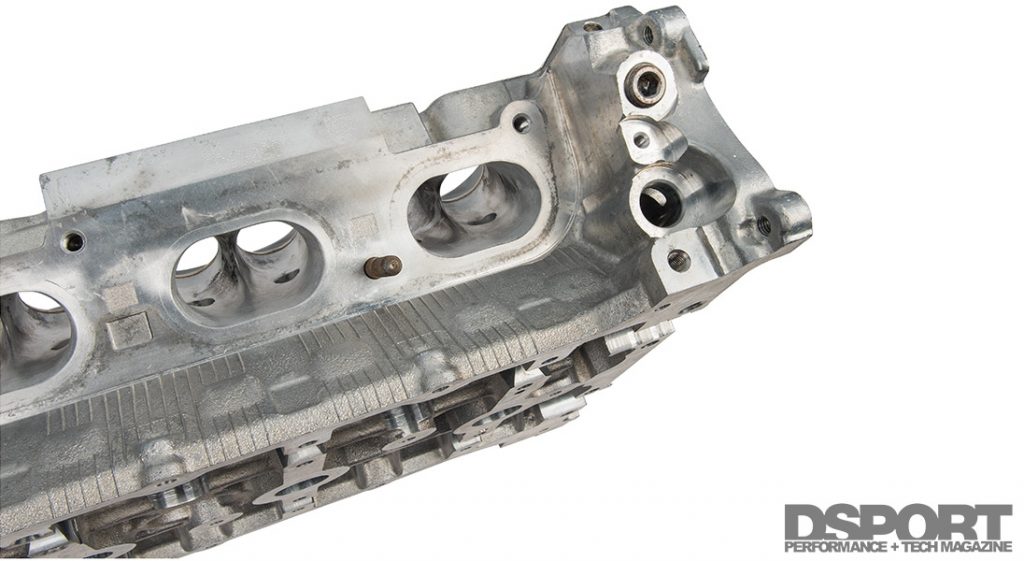 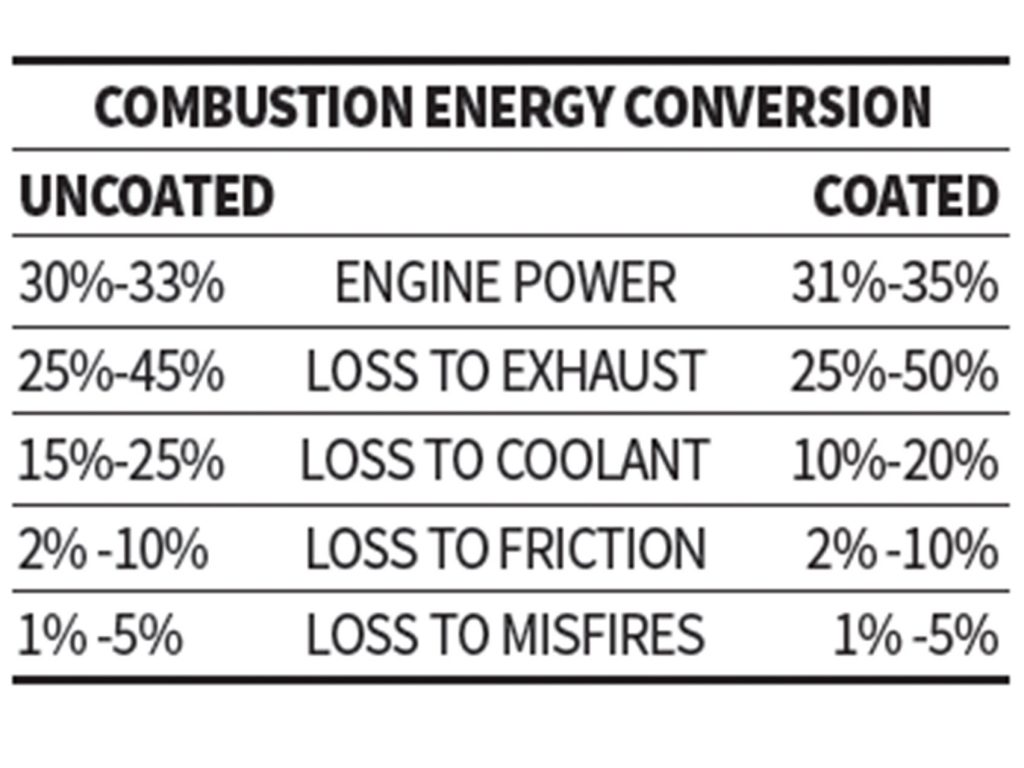 Only about one-third of the chemical energy in the fuel undergoing combustion gets turned into power, the other two-thirds gets lost to the exhaust system, cooling system and overcoming friction. Adding a TBC coating to the pistons and combustion chambers can reduce loss to the cooling system and increase power output and the amount of exhaust energy.

Heat can only flow from an area of high temperature to an area of low temperature. This is the Zeroth law of thermodynamics. Like electricity through a wire, heat can transfer by conduction establishing direct contact from the source (higher temp solid) to the sink (lower temp solid). A hot frying pan conducts heat to a cold pat of butter quickly melting it and turning it from a cold solid into a hot liquid. Heat can also be transferred by means of convection. Convection is the dominant form of heat transfer when a liquid or gas comes in contact with a solid surface. 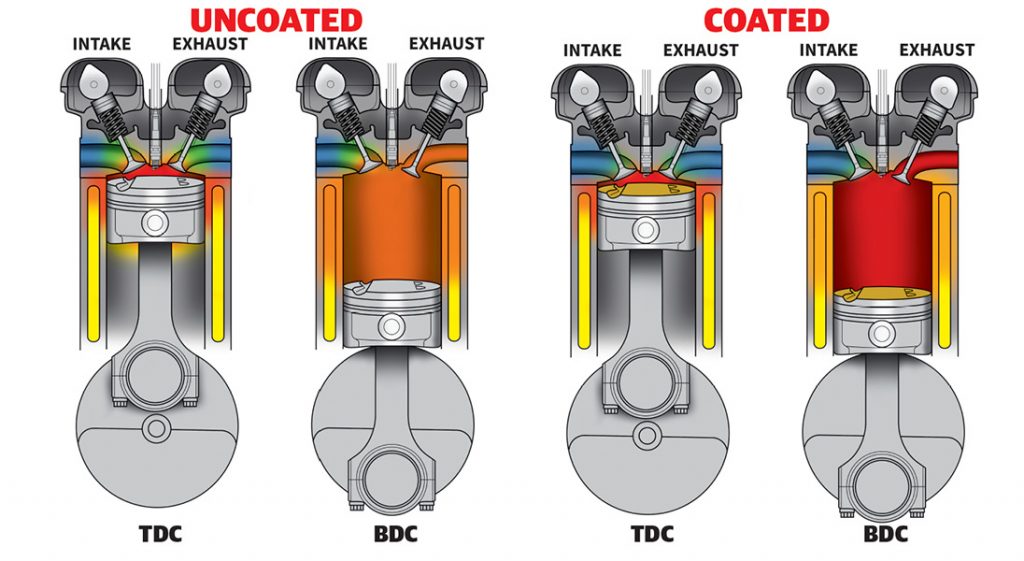 The above illustrations depict the thermal mapping of the cylinder and surrounding areas in an uncoated and coated engine. When TBCs are applied to the piston crown and combustion chambers, the amount of heat transferred to the cooling system is reduced while the amount of heat retained in the cylinder and exhaust port increased. This additional in-cylinder energy increases cylinder pressure to increase torque and power output. The increase in exhaust energy helps to spool the turbocharger quicker too.

One of the challenging realities in SIIC engines is that the same location that benefits from being hot during one or more of the strokes in the 4-stroke process may suffer during one of the other strokes. For example, during the power stroke elevated combustion chamber and in-cylinder temperatures go hand in hand with higher pressures that put more force on the piston to increase torque and power output. During the exhaust stroke, higher exhaust gas temperatures deliver more energy to drive the turbocharger for improved response. Unfortunately, during the intake stroke elevated combustion chamber and piston crown temperatures reduce the density and ultimately mass of the charge air, reducing the engine’s volumetric efficiency. While elevated temperatures during the compression stroke require additional power to be used to overcome the increased pressure while also increasing the chances for pre-ignition. This is where the balancing act comes into play. Modifications that increase the engine’s thermal efficiency (ability to produce more power and less waste heat) at a higher rate than it decreases volumetric efficiency (ability to fill a percentage of the cylinder) can deliver a net power gain.

A Hotter Hot, A Cooler Cool

Ultimately, allowing the engine to run higher in-cylinder temperatures during the power and exhaust stroke or cooler temperatures during the intake and compression stroke will add up to more power output. As for making the “hot cycles” hotter, this is where the limits of certain materials come into play. Exhaust valves, turbine wheels and piston crowns are all susceptible to extreme temperatures beyond the material’s capabilities. Thermal barriers can provide an additional layer of protection by slowing the transfer of heat into the piston crown or valve face while new turbine wheel materials are on the horizon to allow operation beyond 900 degrees Celsius and up to 1,050 degrees Celsius.

As for keeping the “cool” cycles cooler, intercooling and the use of E85 and other alcohol-based fuels can help to lower the temperatures in the cylinder during the intake and compression strokes. Intercooling or more-accurately aftercooling, helps to reduce the temperature increase when the charge air is compressed by rejecting this heat to the atmosphere. E85 and other predominately alcohol-based fuels require more heat to vaporize thus creating a superior cooling effect compared to gasoline. In the case of E85, it will pull out four to five times the heat from the cylinder than E10 (pump gas). 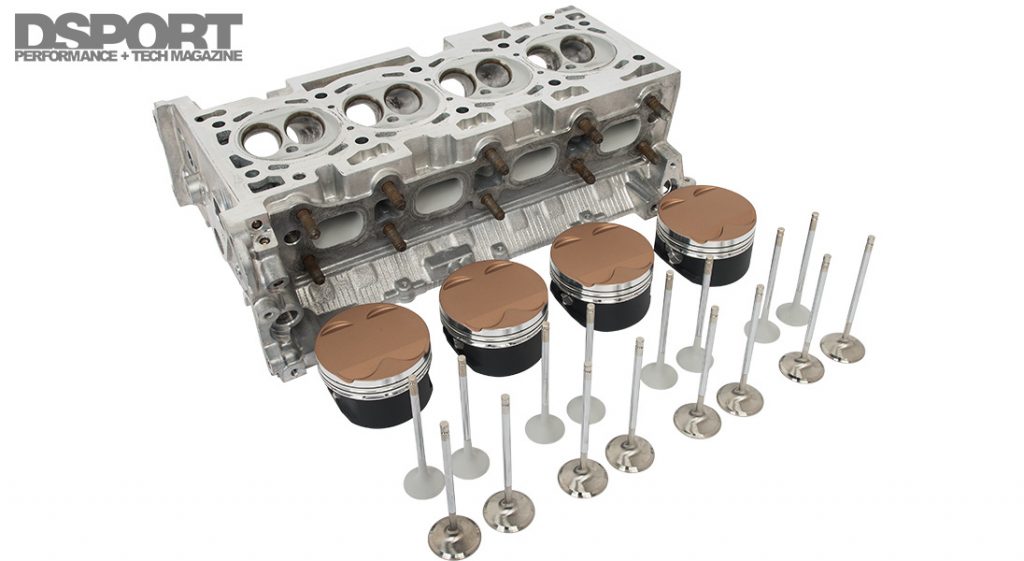 For those that are old enough to remember the McDLT, this was the same problem that McDonald’s tried to solve. They wanted to keep the bun and meat patty portion of the burger hot while the tomato, lettuce and mayo portion was kept cold. The solution was a thermal barrier in the form of a twin compartment Styrofoam container. The hot side of the container would be placed on a heating pad, while the cold side was left exposed to air. While the solution worked, McDonald’s overestimated the willingness of a fast-food customer to assemble a burger prior to consumption. Hence, the McDLT became the Big-n-Tasty clad in conventional packaging.

Thermal-barrier coatings are made of metallic ceramics. They are the most sophisticated of the coatings and are applied by plasma spray consisting of multiple layers. Plasma spraying is a process where the media is shot at very high temperatures and velocities so some bonding occurs at the molecular level, helping the material to bond better overall. Some piston multi-layer coatings have an insulating layer, a heat conducting layer and a barrier layer. The insulating layer protects the aluminum of the piston. The heat- conducting layer reduces detonation-causing hot spots on the piston crown and improves combustion. Finally, the heat-barrier layer helps keep the heat in the combustion chamber. More inexpensive coating processes involve a single layer of sprayed-on and baked metallic-ceramic coating, similar to the coating found on exhaust headers. This is not as effective as a multi-layer coat but is often better than no coating at all. 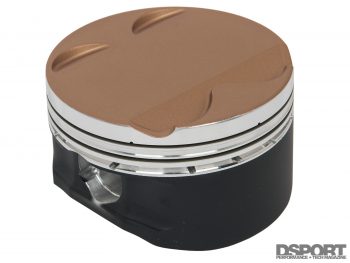 Thermal Barrier Coatings first gained popularity as a coating for the crown of a piston. While the use of a TBC on a piston crown will deliver the aforementioned benefits, by itself it doesn’t dramatically reduce the amount of heat transfer from the cylinder to the cooling system. However, coating the combustion chamber, valve faces, exhaust port, turbo manifold and turbine housing can keep the meat and bun hot while the lettuce and tomato stay cool. When applied in this fashion, less heat gets transferred to the cooling system. Instead, a higher amount of the total heat energy gets turned into power and exhaust energy. While this does result in a slightly hotter cylinder at the start of the intake stroke (reducing the engine’s VE slightly when running gasoline), there is data to suggest that engines running E85 and its superior cooling effect do not see this drop in VE since the chamber and cylinder are rapidly cooled by the evaporating fuel. In addition, the increased exhaust energy allows the turbo to “spool” faster. Because the engine is able to extract more power per drop of fuel combusted, fuel consumption also decreases. 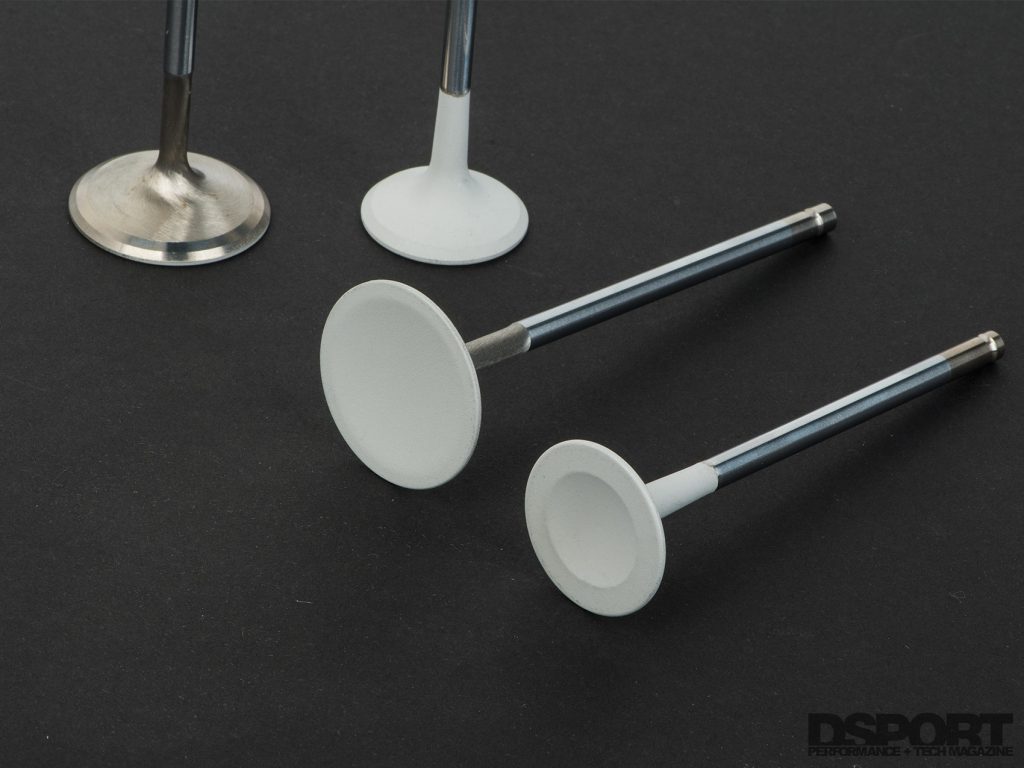 We looked to Swain Tech for our coating needs. We’ve used their services and product line for more than 20 years with great success. For a 4-cylinder engine like the 4B11, the cost to apply a TBC to all four combustion chambers including the valve faces runs $200. Exhaust ports run $18 each. By the time we paid for round trip shipping and insurance, we were just over $350.

If you are considering this on your engine build, it’s important to understand when to send the head and in what state for the coating to be applied. Before sending in your cylinder head, make sure that all of the porting is completed and that the head has already been resurfaced (otherwise you could be machining or grinding off the coating). The valve job should also have been completed as well as the grinding of the valves. The head should be thoroughly clean and completely disassembled. Send only the bare cylinder head, all the valves and a used or new head gasket. When the head comes back, there will be a slight amount of TBC coating on the exhaust valves seats. Ideally, the critical angle can be kissed on the valve job machine to remove the coating or the coating may also be removed by lapping the exhaust valves.

Increased performance and increased reliability are the goals of performance upgrades. Many times an upgrade trades off reliability to gain performance or vice versa. By using TBC coatings on the piston, combustion chamber and exhaust port, torque and power gains on the order of 1-to-5 percent are likely. In addition, turbo response improves while engine coolant and oil temperatures are reduced. As for increasing reliability, TBCs applied to the piston crown and valve faces reduce the amount of heat energy transferred through the parts allowing them to run cooler. While the slight increases in chamber temperature on the intake stroke may have been an area of concern for some, those using E85 and other alcohol-based fuels have no problem cooling the cylinder back to its floor temperature.