Powertrains are complex systems of metal components put under the stresses of heat and rotational forces to put a vehicle into motion. Healthy fluids play a key role in keeping everything working as intended. While different fluids have different applications, their end goal is to minimize friction, reduce heat and extend service life. Fluids operate in inherently challenging environments, with contaminants and heat exposure necessitating regular changes. A properly maintained vehicle should have correct volumes of clean fluids flowing at intended operating pressures. Without fluids, a car would be doomed to imminent and catastrophic failure. 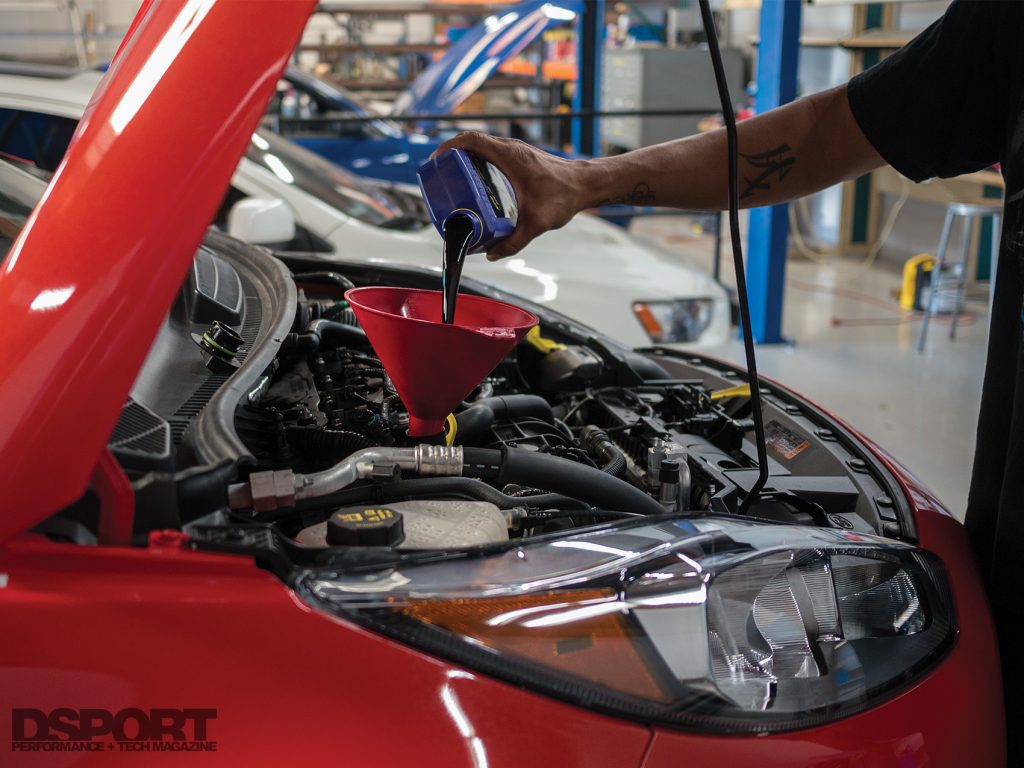 Regularly replacing engine oil is the most important part of basic maintenance. Every moving engine component generates friction, and over time these components can shed tiny pieces of themselves. Paired with thermal degradation from the combustion process, there is a point when oil starts to lose its viscosity. Going beyond these limits can lead to serious damage to valvetrain components, bearings or even complete engine failure. Neglecting to change oil on time can result in increased engine wear, especially during cold starts, which are already taxing on an engine’s lubrication system. Not changing oil can eventually lead to its transformation into sludge, which can clog an entire oil system and necessitate a complete removal and replacement of an engine. 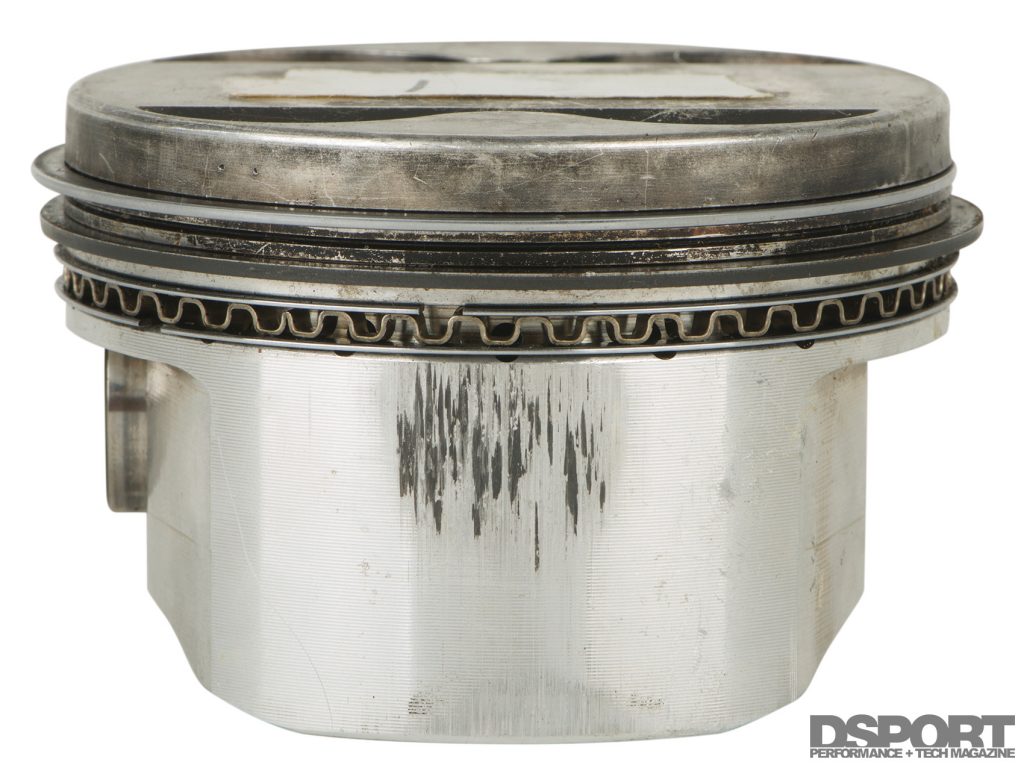 Failing to change oil or maintain correct oil levels can lead to serious damage or even complete failure of an engine and its components. 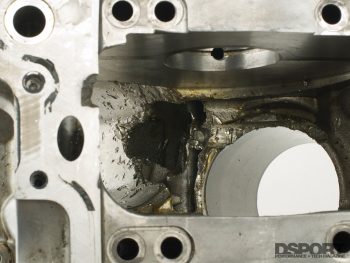 Viscosity and weight are common terms to describe an oil’s resistance to flow. Multi-grade oils are labeled by their viscosity during cold and warm operation; 5W30, for example, flows as a 5W at cold start and 30W at operating temperature. Barring extensive engine modifications or extremely hot/cold climates requiring a switch to different oil viscosities, follow the manufacturer’s recommended oil weights and intervals at minimum. Conventional motor oils used by most manufacturers are made from refined petroleum, however, modern synthetic oils contain fewer impurities and possess better heat retention. Before modern synthetics, oil change intervals would err on the side of caution, averaging approximately 3,000 miles between recommended changes. 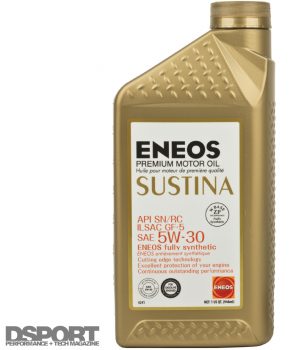 Manufacturer recommendations can act as baseline guides for oil changes, while more frequent intervals and switching from conventional oil to synthetic oil can be implemented as an improvement to standard practice. New formulas and additives in synthetics can extend the mileage between changes to approximately 6,000 miles.

Even with regular intervals, it’s good practice to monitor oil health. Checking for normal oil pressure and measuring dipstick readings should be a part of your regular routine. To take it a step further, there are laboratories that analyze oil samples and report any abnormalities. Finding metallic shavings, irregular discoloration or low oils level are all red flags which should be addressed quickly to avoid serious damage.

Oil bottles display the viscosity and other specifications on the label for quick reference.

Drivetrain components also rely on oils for lubrication. Responsible for translating engine torque to output at the wheels, the gears in transmissions and differentials are subject to high load forces. Just like the rotating assembly in an engine, these gears need oil for cooling and lubrication. Drivetrain components have the advantage of operating in a closed loop, which decreases exposure to contaminants and extends service intervals. These fluids still accumulate small impurities, though at a much slower rate than engine oil. As a result, transmission and differential fluid can last nearly ten times longer than engine oil before needing replacement. Keep in mind, each different type of fluid has its own application. Automatic transmission fluid (ATF) carries different chemical properties compared to dual clutch or manual transmission fluids, so it is important to use the right fluid for every application. 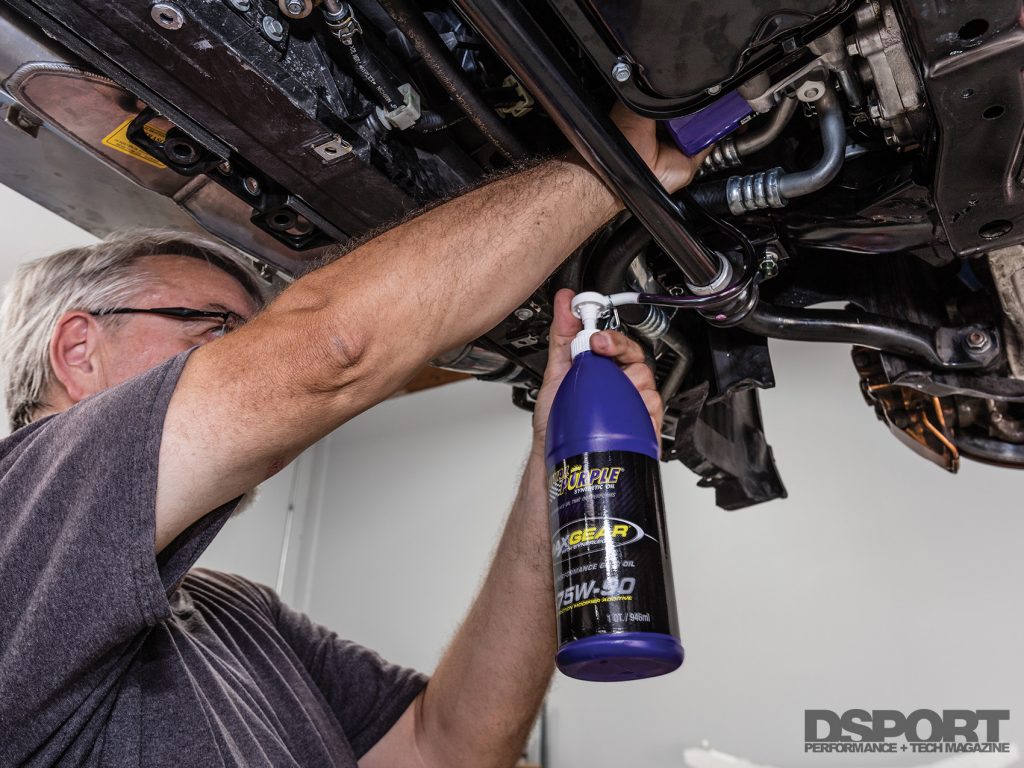 The purpose of engine coolant is self-explanatory, but properly maintaining a cooling system is nonetheless a key part of tune-up basics. Nobody wants to be stopped on the side of the road with a steaming engine bay. Coolant passages in an engine block connect with a car’s radiator, which uses incoming airflow and fans to keep the engine within its optimal operating temperature. Most cars have antifreeze mixtures typically around 30-50 percent, which keeps the cooling system in a liquid state even in freezing climates. Distilled water accounts for the remaining percentage of coolant, as water possesses excellent heat retention. Much like engine oil, cooling systems are designed to function in a pressurized state, raising the boiling point of the coolant. 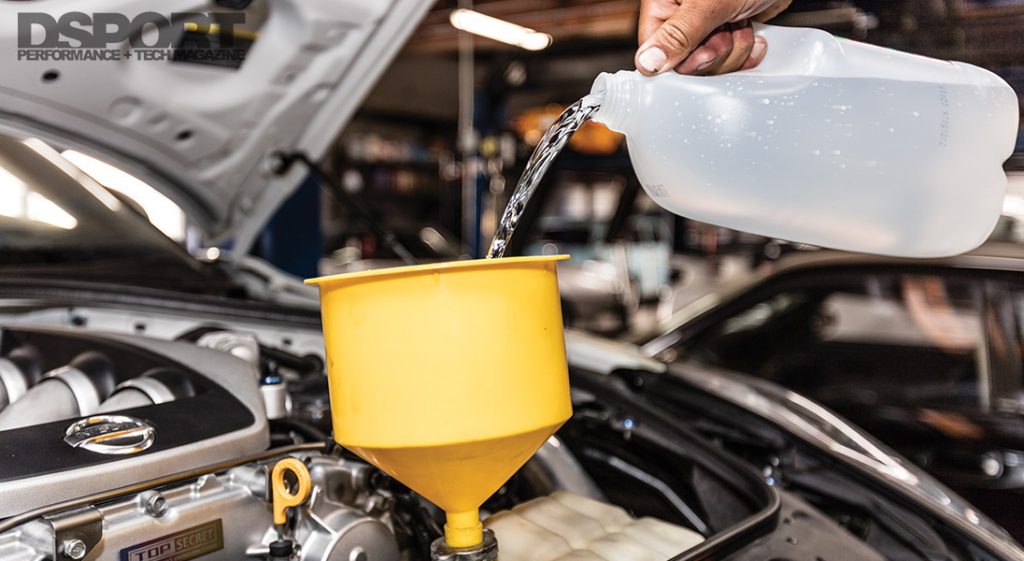 Cooling issues can arise if air pockets find their way into the system. Due to the difference in heat capacity, it is important to burp the system to eliminate any trapped air. Each engine has an ideal operating temperature, and while it is helpful to reach that point quickly, going beyond the limit can cause serious issues. Allowing a cooling system to go over its boiling point can warp engine components and cause blown head gaskets.

Maintenance of the cooling system will lower the risk of overheating, especially for vehicles running under demanding conditions. Blockages in the system caused by mineral buildup can be fixed by flushing the radiator and replacing the thermostat, allowing unobstructed flow through the cooling system.

Engine thermostats regulate the flow of coolant between the radiator and engine block. Under normal conditions, a thermostat will open or close to keep an engine at its ideal operating temperature. Faulty thermostats can get stuck in either the open or closed position, causing an engine to run at too low or too high of a temperature. You can test a thermostat’s functionality by dropping it into a pot of boiling water then taking it out again. A properly functioning thermostat should open when dropped into the water, then return to the closed position after being removed from the water. 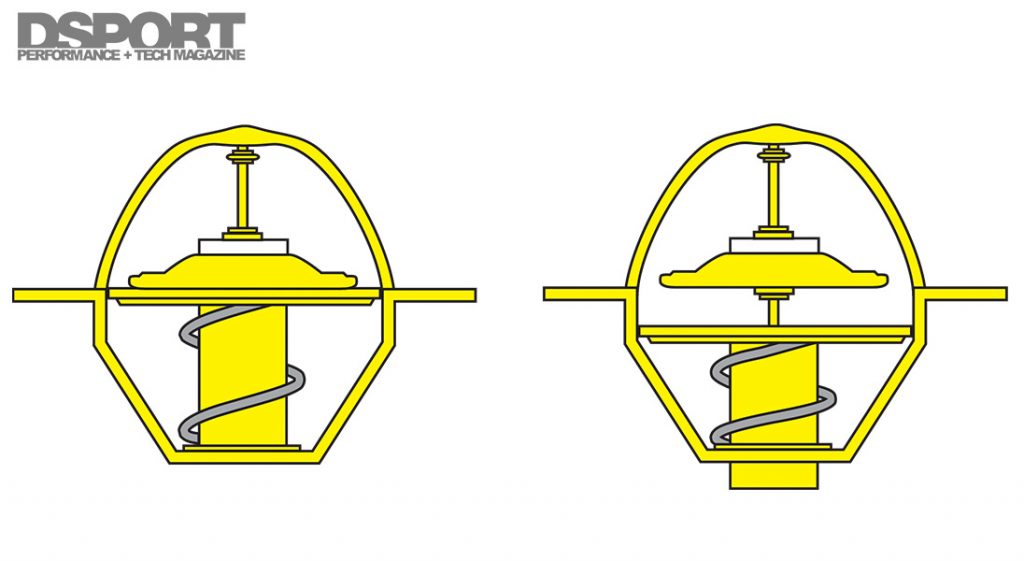 When cars leave the production line they have fresh seals, bolts torqued to spec and tight tolerances. These seals will degrade over time, causing leaks that can slowly drain fluid levels.

Many fluids and oils are individually colored which can make it easier to identify a leak; antifreeze is typically green, ATF is red and engine oil typically starts amber (excluding Royal Purple’s purple-colored fluids) but can become noticeably darker over time. Tracking down a leak early is not only easier, it also minimizes the risk of damage and simplifies cleanup

You just finished yet another oil change on schedule, but there’s some debris that came out from the oil pan. Obviously priorities change to finding the culprit, but how can you tell if this is a simple fix or a precursor to imminent engine damage? Here’s a quick visual reference that can help to identify different types of contaminants so you can track down the source and solve the problem. 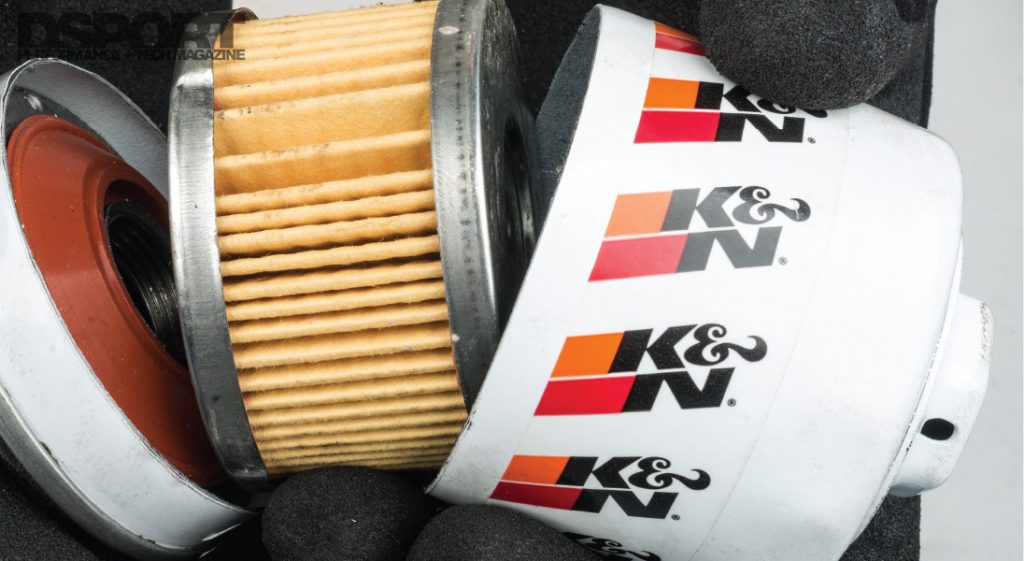 Just like getting a checkup with a doctor, periodic fluid checks are the easiest way to prevent unforeseen mechanical issues. Pulling dipsticks ensures correct fluid levels, and is also a good way to physically inspect fluids for obvious contaminants or discoloration. Replacement intervals can vary depending on driving habits. Frequent track visits and stop-and-go traffic will decrease fluid longevity and warrant more servicing. 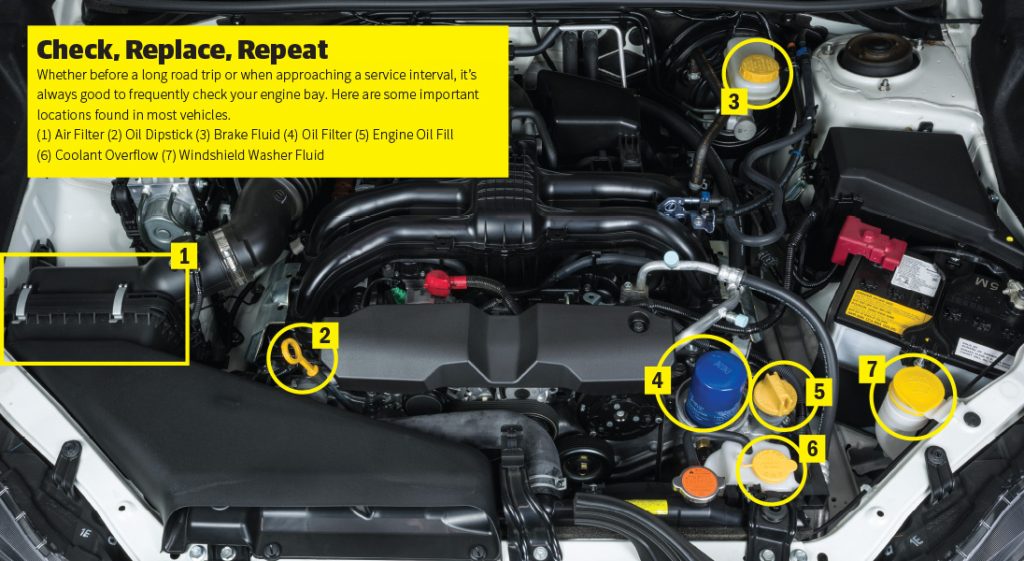 Being vigilant with fluid changes is the easiest way to keep your car running well. The basic cost for consumables is low, especially compared to engine or transmission repairs needed from neglecting fluid changes. Changing fluids can be a great starting point for those who want to learn more about maintenance because it can be done with limited knowledge, budget and tools, while minimizing the risk of mechanical failures down the line.