DO YOU FIND THAT YOU’RE ADDICTED to the thrill and speed of driving fast, but don’t know the first thing about what’s actually going on under the hood? Do you want to know more about what’s happening without having to attend Auto Shop 101? Are you intimidated by the tech at your local performance shop because he’s always trying to sell you blinker fluid, muffler bearings and other parts that you’re not sure even exist? If you answered “yes” to any of these questions, this is where you need to start. We’ll tell you all about the noisy chunk of metal connected to your wheels and a little bit about the things that make it go forward. 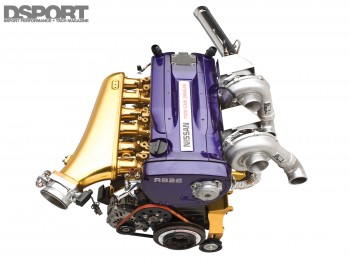 In order to fully understand how the latest in speed parts work, you first need to understand how an engine works. Most cars as we know them are powered by what is called a 4-stroke engine. A 4-stroke refers to the four strokes in the power cycle; the intake stroke, the compression stroke, the power stroke and the exhaust stroke. We will cover these in greater detail in the ENGINE 101 PART 2 section. For now, what you need to know is that the 4-stroke cycle explains how a mixture of gasoline and air can be ignited, combusted and smoothly converted into useable power to hurl you down the quarter mile, around a track or just take you to work.

An engine is composed of several major components; the block, the crank, the rods, the pistons, the head (or heads), the valves, the cams, the intake and exhaust systems and the ignition system. These parts work together in an exacting manner to harness the chemical energy in gasoline, converting many small and rapid combustion events into a turning motion that eventually spins your wheels and propels your car. 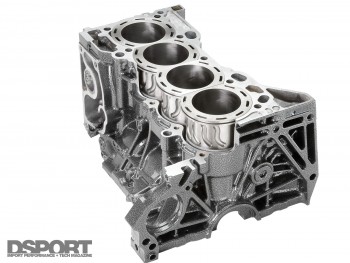 The block is the main part of the engine that contains the reciprocating components that harness the energy in the gasoline. If you’re looking under the hood, it’s the big piece of metal that’s found in the center of the engine bay that seems to have a whole bunch of other metal, wires and tubes attached to it.

The block has circular holes that pistons slide up and down in. Each hole is called a “cylinder bore”. Since a cylinder bore or “cylinder” has one piston the total number of cylinders in the block is the same as the number of pistons; a four-cylinder engine has four bores and four pistons, a six cylinder will have six bores and six pistons and so on. The cylinder head is called a head because it sits on top of the block, covering the cylinders and the pistons. Some engines feature cylinders that are horizontally opposed or are in a “V” configuration. As a result, there are two heads that cover the areas on the block that have exposed pistons. For now, we just need to know that the cylinder head, or head for short, just sits on top of the block and covers each of the cylinders that have pistons in them.

The block also has a number of fluid passageways cast into it. Some of these are used to channel cooling fluid called “coolant” around the cylinders to maintain engine temperatures and to prevent overheating. The other passages direct engine oil to the moving parts to lubricate and defend against power-robbing friction. Since the block must contain tremendous cylinder pressures, manufacturers cast them out of iron for strength. Other manufacturers cast lightweight aluminum blocks for weight reduction. The aluminum blocks use a steel-alloy cylinder liner or specially-coated bores so that they have a harder surface and will provide an extended service life. 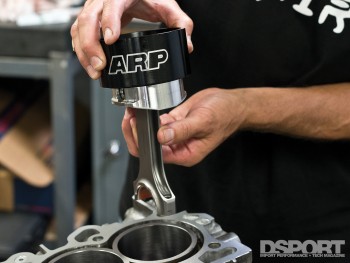 Each piston has open-ended rings of metal fitted onto them, and they are simply referred to as “rings”. These are thin, circular, springy metal pieces that fit in grooves around the ring land areas at the tops of the pistons. The rings act as a seal that keep the cylinder pressure from the combusted air and fuel mixture between the head and top of the cylinder, ensuring the pressure pushes the piston down instead of pushing past it. The piston rings also scrape oil off the cylinder walls so that all of your engine’s oil doesn’t get burned up during combustion. There is also a corrugated ring, known as the oil ring, which allows oil to lubricate the cylinder walls so that the piston, rings and cylinders do not wear prematurely. If your pistons had no rings or rings that didn’t seal very well, the combustions wouldn’t be able to push down the piston with much force and your car wouldn’t produce any power, if it ran at all. Also, if the rings weren’t able to scrape the oil off the cylinder walls your engine would eventually run out of oil, seize up and make a whole lot of nasty black smoke from the burning oil. 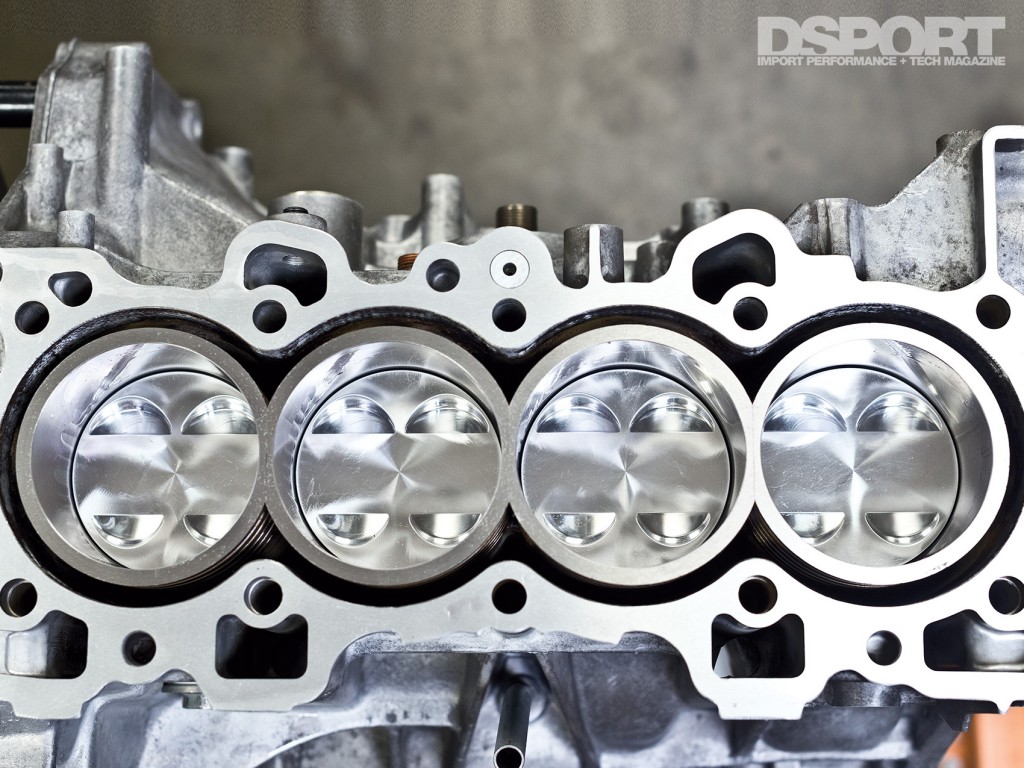 After the block is cleaned, measured and machined, the crankshaft can be installed and a set of pistons and rods will fill the bores. 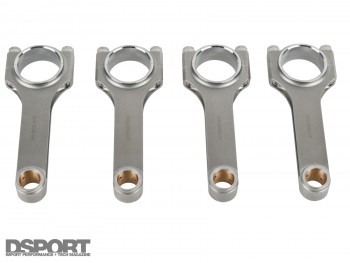 The pistons are attached to a piece of metal called a connecting rod. The connecting rod’s job is to transfer the force of the pressure shoving the piston down the cylinder bore to the crankshaft or “crank”. Providing the link between the piston and the crank, it is understandable how connecting rods earned their name. 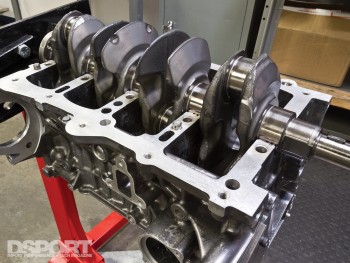 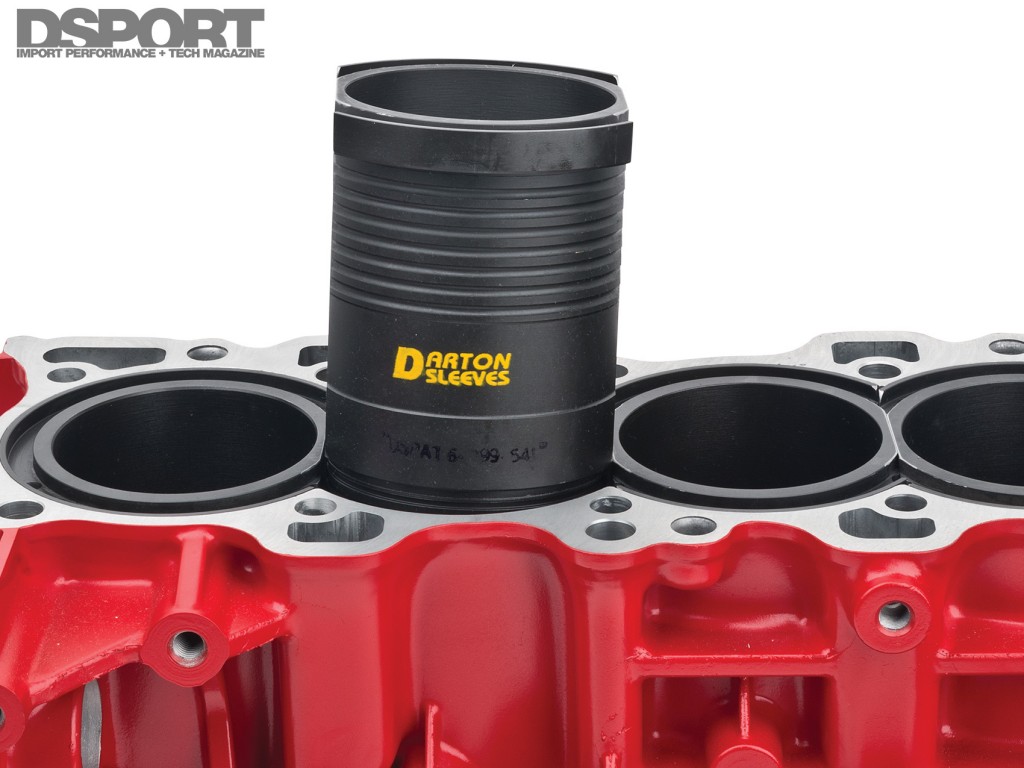 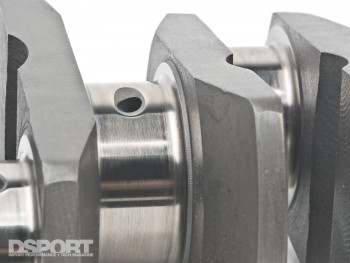 The crank in an engine is very similar to a bicycle crank. The up-and-down force of you pedaling is exactly like the up-and-down force of the pistons moving up and down the bore. In a car engine, instead of the energy of your legs pushing on pedals to create the force it’s the combustion in the cylinder and pressure acting on the piston that creates the energy. If you look at the picture, you’ll see the crank has offset throws exactly like a bicycle crank so the rods and pistons serve the same function as your legs. On a bike, when you pedal downwards your bike goes forward and the offset throw comes upward on the other side. Similarly, when one piston is pushed down by the air/fuel combustion, it turns the crank and pushes another piston up, ready for the next combustion. This is what makes your car go forward. The crankshaft is attached to the block with pieces of metal called main caps. The crank is actually clamped to the block, not attached, with more sleeve bearings (called main bearings) to help lubricate the crank’s journals. The main journals also have holes in them that allow pressurized oil from the engine oil system to lubricate the journal and bearings.

Valves: The Gateways In and Out

The cylinder head also contains the intake and exhaust valves. The intake and exhaust valves are metal pieces that resemble golf tees. The valves act as doorways for incoming air and fuel and outgoing exhaust gasses, respectively. During the 4-stroke process, the intake valves open to allow the air/fuel mixture into the combustion chamber then closes as the piston rises to compress the mixture. After the mixture is ignited and burns, the piston is pushed down into its bore. On the piston’s way back up, the exhaust valves open to let the burnt gasses out and then closes in preparation for its next turn in the engine cycle. 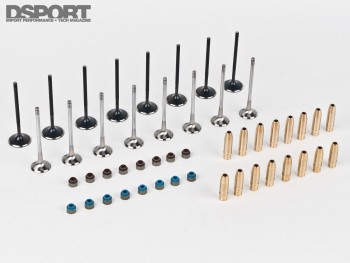 In order to open the valves, the engine has metal sticks called camshafts that have special bumps (lobes) used to lift the valves open. The cams are turned by a belt or chain that connects the spinning crank to the cam gears; this is what’s called the timing belt or timing chain. Some camshaft lobes push directly on the valves to open them, but most street-driven car engines work indirectly through a rocker arm. A rocker arm is essentially a miniature see-saw; one end of the rocker arm is pushed up by the camshaft lobe which makes the other end push down on the valve tip to open the valve. Valve springs are literally springs attached to the valves that help keep them closed when they’re supposed to be closed.

As mentioned earlier, the cylinder head is a big piece of metal that attaches to the top of the block and covers the cylinders where combustion occurs. Usually constructed from aluminum, the head also contains the spark plugs, valves and the rest of the valvetrain (valve springs, retainers, camshafts).

The head(s) have to be torqued down to the block in order to contain the rapidexpansion of the ignited air/fuel mixture without distorting, separating or blowing completely off of the top of the block. When the head is torqued down to the block, it creates an area atop each cylinder where combustion energy is released and focused on the piston. This area is called the combustion chamber. If you look at the side of the cylinder head that bolts to the block you’ll see the combustion chambers as the spaces in the head that line up to the tops of the cylinder bores. Visible within each chamber are the tip of the spark plug and the flat parts of the valves. It is in this combustion chamber that the spark plug creates an electrical arc which ignites the air/fuel mixture. 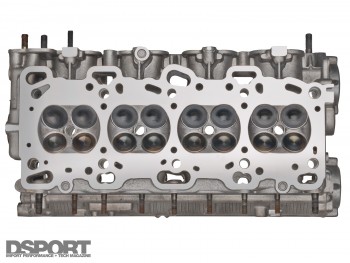 The head also has passageways cast into it that allow coolant or oil (depending on what kind of passageway it is) to circulate through the head to help it keep cool and lubricated. In between the head and block you will find a piece of metal or composite material that has areas cut out for each of the bores and every one of the passageways that run from the block to the head. This sandwiched piece is called the head gasket.

Most modern engines have a dual overhead cam (DOHC) valvetrain which means that the intake and exhaust valves have their own camshafts. The advantage of having separate camshafts is that each cam can be placed very close to the valve, allowing the cam’s lobes to either work directly on the valves or through a very small rocker arm. This reduces the inertial mass of the valvetrain to a minimum which aids high-rpm operation even further. Almost all modern high-performance engines use DOHC valvetrains in order to maximize the amount of available high-rpm power. The Mitsubishi 4B11 found in the EVO X and the Mazda MZR 2.3 DISI found in the MAZDASPEED3 are prime examples of current high-performance DOHC motors. 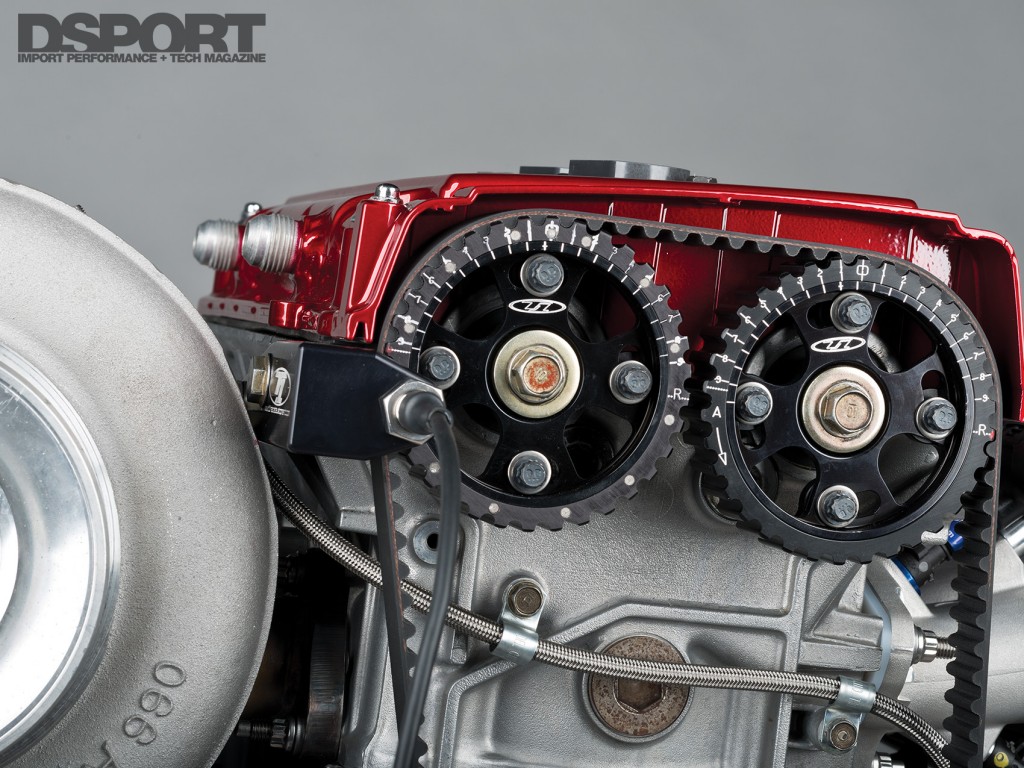