Bigger, stronger, or both bigger and stronger? When performance goals require increased engine displacement or projected cylinder pressures and power levels exceed factory block capabilities, the engine block will need to be addressed. The engine block serves as the foundation for the entire engine. Its primary purpose is to establish a home for both the cylinders and rotating assembly. It is also critical in serving as the main container of the engine’s coolant and lubrication passages.

Tremendous increases in power production over stock power levels will produce increased cylinder pressures. These increased cylinder pressures may dictate an increase in engine displacement, cylinder strengthening or both. Increasing an engine’s displacement requires either enlarging the cylinder bore or adding to the stroke of the engine’s crankshaft and often involves both. Enlarging the cylinders will require some type of machining operation, while installing a longer-stroke (a.k.a. “stroker”) crankshaft usually requires some grinding of the block for proper clearance along with custom pistons and/or rods that must accommodate the stroker crank.

When cylinder pressures are increased due to significantly higher-than- factory power levels, the OEM liners in aluminum blocks can fail. Fortunately, many aftermarket block-sleeving solutions are available to solve this problem.

Up through the late 80s and early 90s, the majority of high-output engines were based on cast-iron block designs. Nissan’s RB26DETT, Toyota’s 2JZ-GTE and Mitsubishi’s 4G63 relied upon cast-iron blocks to earn notoriety among Japan’s best performance engine designs of all time. The import performance pioneers of the mid-90s proved that an all-aluminum engine like Honda’s B- series could be modified to survive at power levels that OEM engineers never fathomed. Today, cast-iron is no longer used as an engine block material and the flagship performance platforms like Nissan’s VR38DETT, Mitsubishi’s 4B11, Mazda’s MZR and Honda’s K-series all utilize aluminum engine blocks.

UP THROUGH THE LATE 80S AND EARLY 90S, THE MAJORITY OF HIGH- OUTPUT ENGINES WERE BASED ON CAST-IRON BLOCK DESIGNS

Cast-iron and aluminum each exhibit different material properties which leads to different engine block designs. In simplest terms, cast-iron is a stronger material with a harder surface that is more resistant to wear. This allows cast-iron blocks to have the cylinder walls integrated as parts of the block itself. On the downside, cast-iron blocks are heavier. While aluminum provides benefits for weight reduction, it’s a softer material that on its own would wear quickly and excessively as a cylinder material in direct contact with cast-iron, ductile-iron, steel or other piston-ring materials. The original solution for aluminum-block designs has been a liner or sleeve made of cast- iron, ductile-iron or steel to provide a surface with proper wear properties against a piston and piston ring. Today, many aluminum blocks use a plasma- sprayed coating on the cylinders in place of a liner. The Nissan VR38DETT found in the R35 GT-R employs this technology. 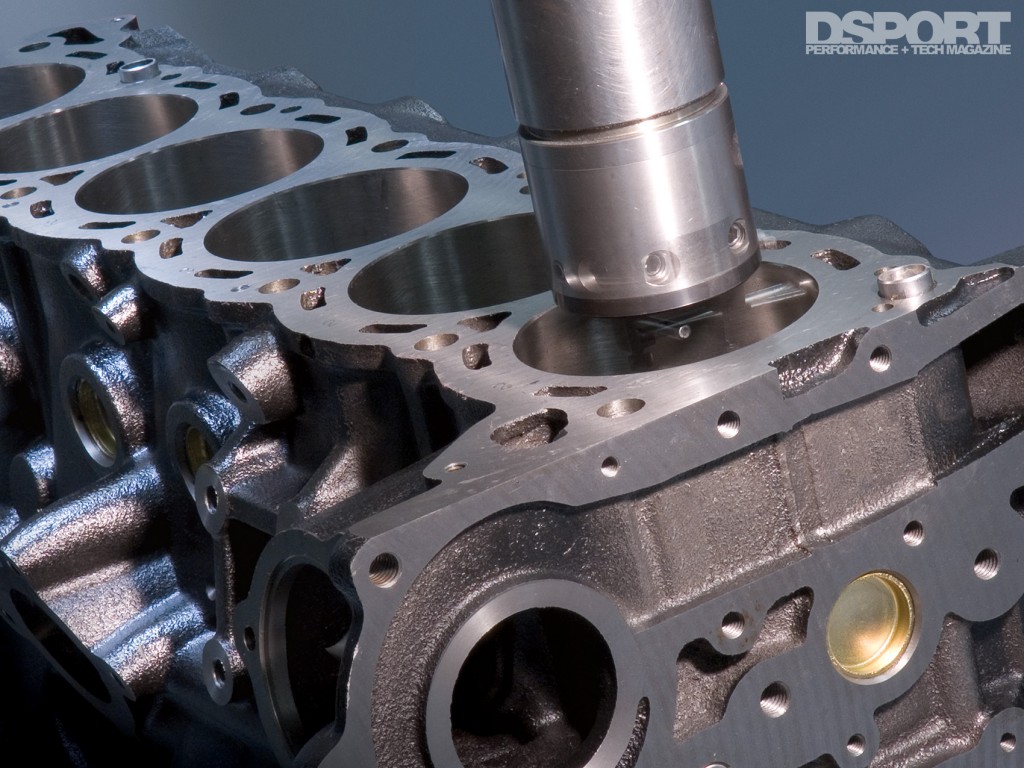 No matter what material is used in its construction, the block is the basis upon which all other engine components are installed.

Nearly all cast-iron engine blocks can have the cylinders bored and honed to be 0.5mm larger. Some cast-iron blocks can even be safely increased to a bore size that’s 1mm oversized. While many domestic manufacturers offer high-performance cast-iron blocks with thicker cylinder walls, only the Nissan RB26DETT engine has such high-performance cast-iron block options available from NISMO. NISMO offers the N1 engine block and for a short time a run of GT blocks (only 1000) were produced. These blocks offer thicker cylinder and deck surfaces to provide more room for boring the cylinders and more material to increase rigidity and strength for high- horsepower operation.

On aluminum-blocks, cylinders that do not incorporate a liner cannot be bored and honed. This would mean that any plasma-sprayed bore cannot be directly bored and honed to accommodate an oversized piston. On cylinders that do incorporate a liner, boring and honing a factory liner is generally approached on a case-by-case basis. Depending on the power level of the engine and the amount of the overbore needed to get a used cylinder in shape, it may or may not be advisable to use the stock liner. A more common solution for a high-performance aluminum block is to receive some type of aftermarket sleeve and machining process to install the sleeves in the aluminum block.

To Sleeve or not to Sleeve?

The concept of “sleeving” an aluminum block has both its proponents and its critics. The import performance market first explored sleeving during the turbo-Honda-performance rush of the mid-90s. Honda’s open-deck B-series block would experience cylinder liner cracks and failures when power levels soared about the 300-horsepower level. A variety of potential fixes and solutions were tried including “block guards”, pinned sleeves, T-sleeves and step sleeves. Different machine shops had different philosophies on both the design of the sleeves and how the block should be machined to accept the sleeves.

SOME SLEEVING WAS HIGHLY SUCCESSFUL, SOLVING THE ISSUES AND ALLOWING FOR 500 HORSEPOWER- PER-LITER TO BE REALIZED
As a result, some sleeving was highly successful, solving the issues and allowing for 500 horsepower-per-liter to be realized from a B-series engine without incident. Unfortunately, a number of machine shops didn’t get it right. As a result, reports of “sinking” sleeves and accompanying head- gasket failures were very common, especially in the early days of the process. We still hear of these failures to this day. However, DSPORT has had tremendous success with its B-series projects that received Benson’s Performance Machine-installed sleeves. Of course, there are other machine shops that can do the sleeving process properly. When sourcing a shop, it’s best to talk to customers that have engines operating properly for at least a year after the build. If the sleeves haven’t slipped after 10,000 miles of street driving, they aren’t likely to be moving around. 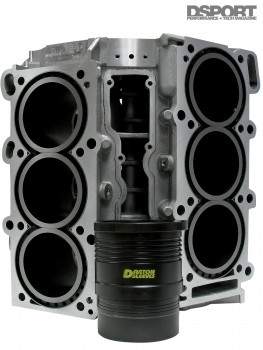 Darton is the most popular and respected manufacturer of aftermarket high- performance sleeves for import engines. Darton’s dry sleeves are for applications where the sleeve becomes fitted into the block without coming in direct contact with the coolant. Instead “dry” sleeves are installed with the surrounding area being in contact with the bored-out aluminum material forming the original cylinder walls around the factory liner or plasma-sprayed bore. “Wet” sleeves are generally thicker and the entire factory aluminum cylinder is essentially replaced during this sleeving process. For some applications, Darton offers its patented Modular-Integrated-Deck (M.I.D.) technology which combines a wet sleeve with an integrated deck that helps to stabilize the sleeve while strengthening the upper portion. Darton also incorporates phosphate coatings, o-rings and special swirl coolant technology to improve the performance of its sleeve lineup. Depending on the OEM deck design in the block, Darton may offer one or more of styles of sleeves for the application. 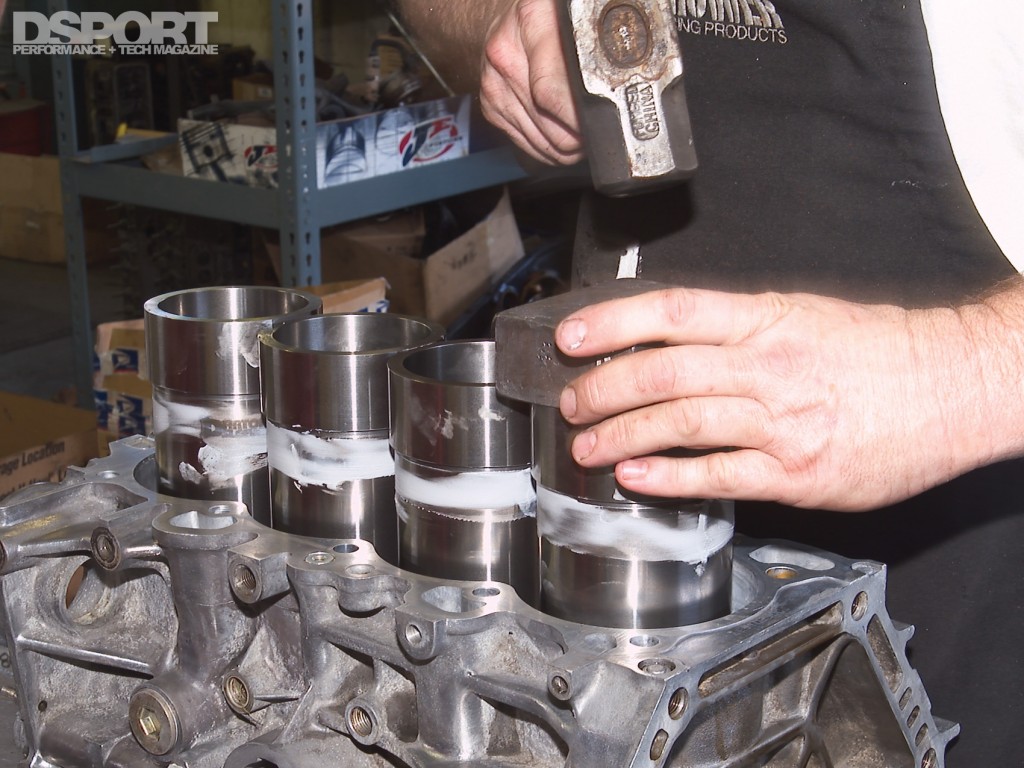 Block sleeves are sometimes installed with an epoxy to ensure they stay in place.

The deck of the engine block must provide a distortion-free, rigid surface to provide a pressure-tight seal for the head gasket once the cylinder head is bolted in place. In addition the deck area must provide the proper amount of coolant flow and heat transfer to the cylinder head to keep cylinder head temps in the desired range. Engine block deck designs fall into three categories; closed, open and semi-open (a.k.a. semi-closed). In a closed deck design, the deck surface is only drilled for the head fasteners, coolant passages, oil supply and oil drainback passages. The tops of the cylinders are integral with the deck. This configuration is found in all cast-iron blocks and in some high-performance aluminum blocks. Honda’s B-series and a number of other aluminum engines use an open-deck design. These designs have the coolant channel cast into the top of the deck. This design improves cooling and reduces hot spots in the cylinder but provides much less strength and rigidity in the top of the cylinder. When DART built its aftermarket B-series block, they chose a closed-deck design to increase the strength of the block and improve head gasket seal. Today, the majority of aluminum blocks use a semi-open design that attempts to balance the benefits of each design for the intended usage. 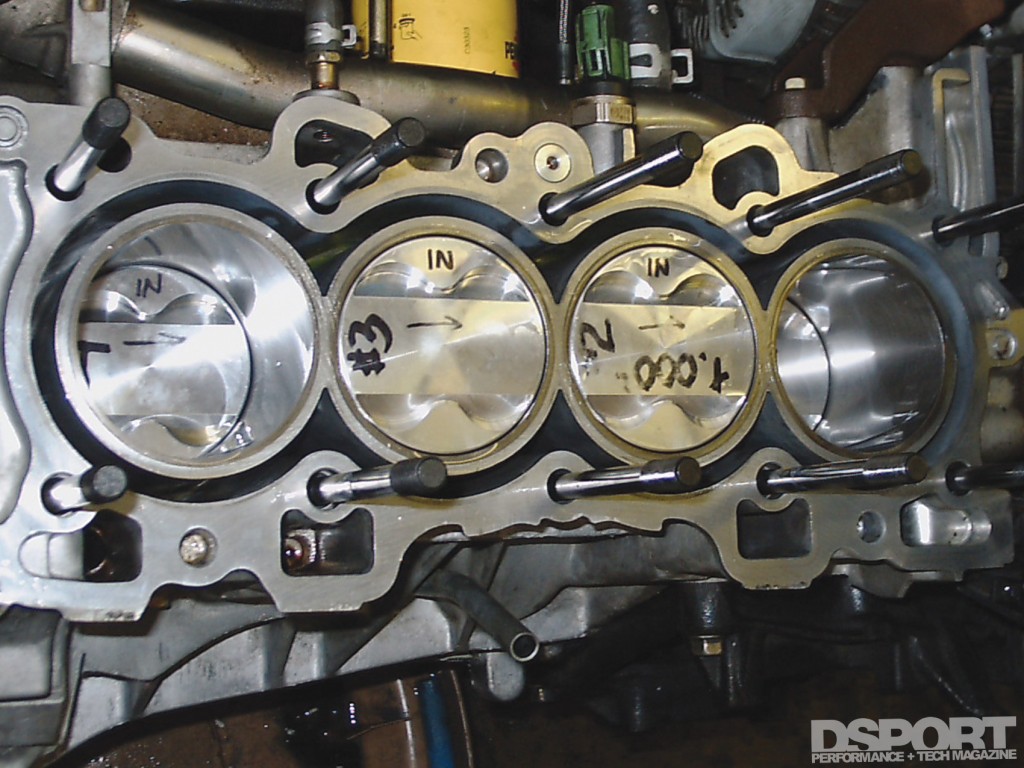 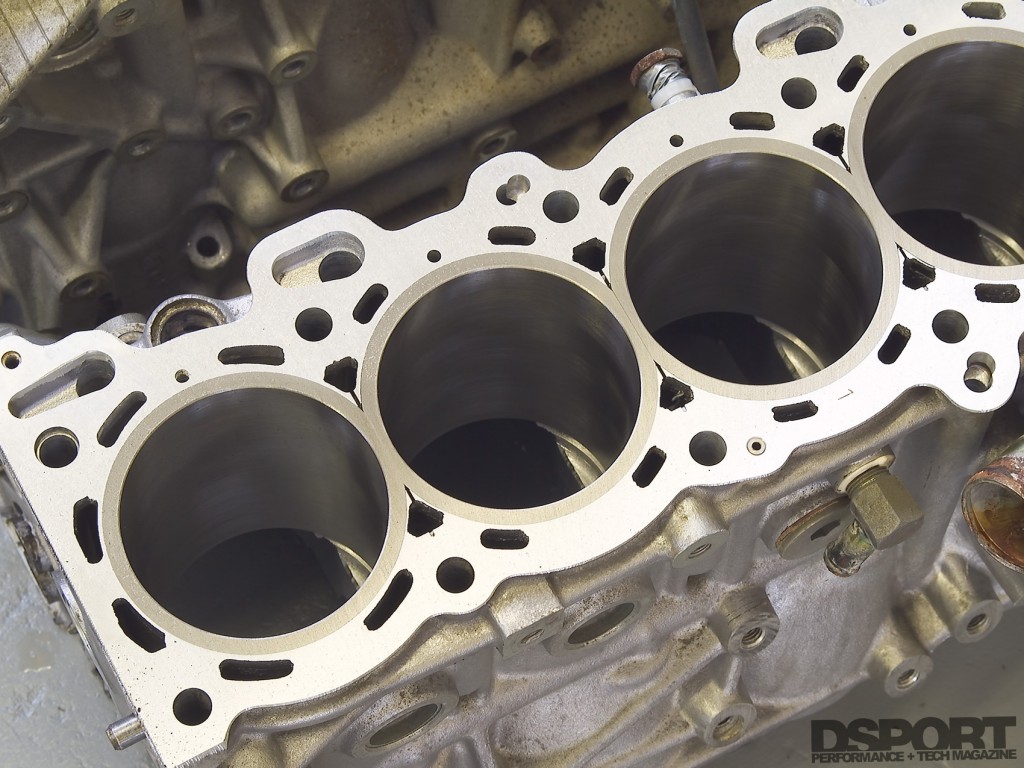 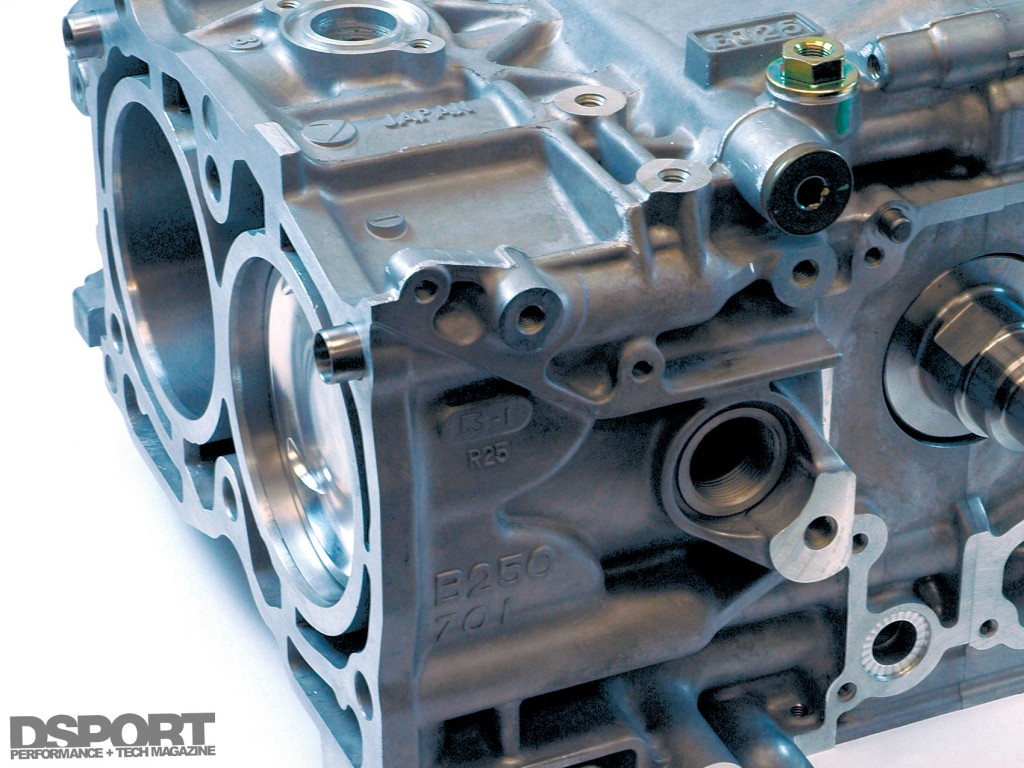 In addition to being the home of the engine’s cylinders, the block is also responsible for locating and keeping the crankshaft on its axis. Some factory blocks incorporate “girdles” which significantly increase the stiffness of the bottom end of the block. On blocks not using a factory girdle, sometimes an aftermarket girdle or aftermarket steel main caps can be installed to strengthen the block. Either of these solutions require installation by a machine shop to maintain the proper alignment and clearances for the crankshaft in the block.

Unless one is lucky enough to be building a Honda B-series or Nissan RB26DETT, there isn’t an aftermarket engine block option. That leaves two options: start with a new engine block or a used core. For plasma-sprayed cylinder bore engines that will not be sleeved, a new block or an under 10,000-mile block is the best starting point.

For drag-race applications, some engine builders utilize a water-jacket filler, like Hard Blok. These cement-based products are designed to significantly increase the strength of the block and cylinders by filling the void in the coolant passage with a specially-blended cement. Cement has exceptional strength in compression making it ideal as a filler material. These specially- blended cements have identical expansion characteristics to cast iron. Some engine builders also use the product in aluminum blocks. Blocks can either be partially or completely filled. Completely filled blocks do not require a cooling system (making the engine air cooled), but that makes the process only appropriate for drag race engines. Partially-filled blocks will limit the effectiveness of the cooling system. However, on E85 applications or methanol-applications, a slight amount of block fill may still allow for a “streetable” configuration.

Avoid solid mounts on the engine. At higher torque levels, solid mounts can stress and distort the block, deck and cylinders. Quality machine work is critical to peak performance, so be sure to read up on machining in the Engine Blueprint Guide.