Some of the most famous and life-changing inventions were stumbled upon by accident. One such discovery, Evapo-Rust® Super Safe Rust Remover, is to the hands-on enthusiast as a Post-It Note is to the office worker. Like Post-It Notes, Penicillin, Super Glue and microwave ovens, Evapo-Rust was a discovery of happenstance, a byproduct of research for a different purpose. In 1997, chemist David Harris labored with various chemical solutions in the quest for a rust inhibitor. While testing different formulas on pieces of steel left in the corner of a room, he noticed that one actually removed rust. However, it required temperatures of 160° Fahrenheit in order to effectively remove surface rust. He continued in his research for a rust inhibitor while saving the formula for rust removal. Three years later, he revisited his rust removal discovery and further researched it. After six months of additional development, Evapo-Rust was born.

Evapo-Rust, a non-toxic, non-corrosive, water-based solution, contains no acids, bases or petroleum solvents. Yet Evapo-Rust proved effective among the various chemicals evaluated in our rust removal article, Modern Alchemy (DSPORT September 2014 Issue #145). This water-soluble rust remover’s pH neutrality makes it safe for skin contact and the environment. Curious how this all happens? So were we. However, since Harris elected not to file a patent on his formula and thus was not obligated to reveal the chemical formula for Evapo-Rust, he was able to keep the makeup of his product a secret. If anyone wanted to reverse engineer it, they theoretically could try, but it would likely be a fruitless effort. Put simply, Evapo-Rust works by way of a chemical process called selective chelation. Harris developed his formula to bond to oxidized iron rather than dissolving it the way that acidic formulas do. Hence it’s an effective yet safe solution for rust removal. 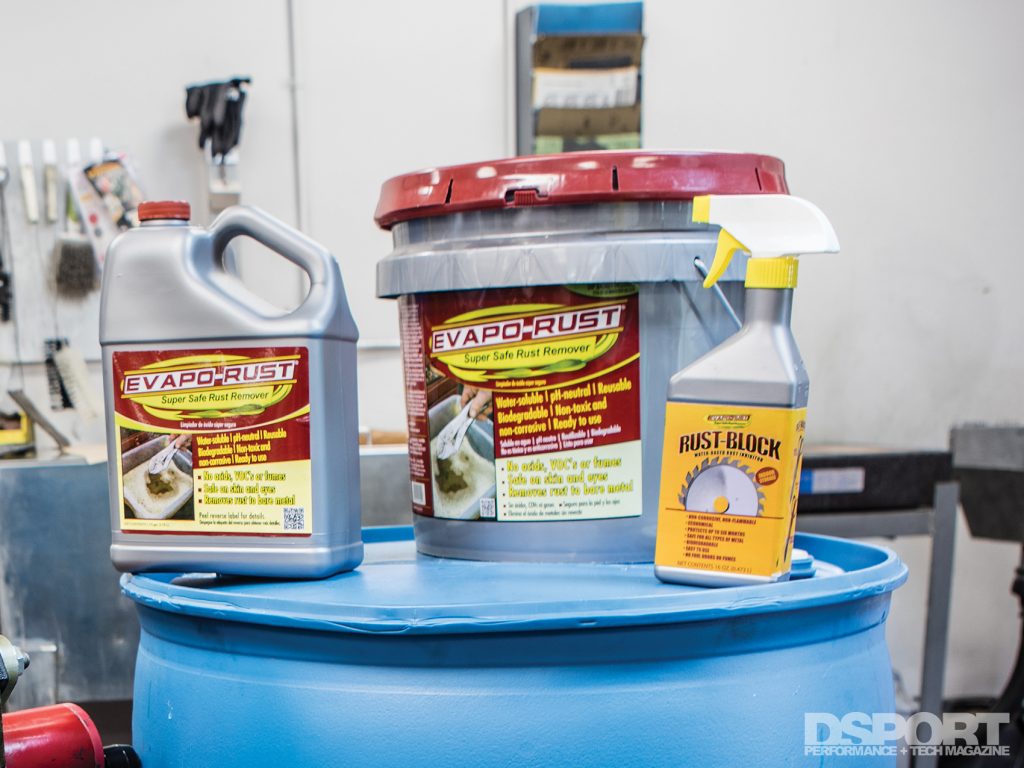 1. Typical lifespan for a 55-gallon drum of Evapo-Rust is approximately 50 engines. 2. When Evapo-Rust has treated 300 lbs. of oxidized iron per gallon, it has reached the end of its service life. 3. The specific gravity of Evapo-Rust starts at 1.04 and reaches 1.08 at saturation and end of life.

No Rust Too Tough

If you’ve got any metals that contain iron and you live where there is any moisture in the air, those metals will eventually oxidize or rust. While dipping small rusty parts in Evapo-Rust has already proven an effective method of rust removal, how would a large, rusty item, like an engine block, fare against Harris’ invention? We decided to put Evapo-Rust to the test on the legendary iron block of the 2JZ-GTE engine. This engine had been recently line bored at the DSPORT machine shop and was being prepped for reassembly. Before attempting rust removal, Harris recommends a thorough cleaning of the block for best results and to ensure a long service life of the Evapo-Rust solution. To start, the block needed to be disassembled and thoroughly degreased. Once free of grease, oil and metal shavings, the engine was rinsed twice to ensure that all of the degreaser had been removed. This step is important because the alkalinity of degreasers will change the pH of Evapo-Rust, reducing its effectiveness and lifespan. After a thorough cleaning, the block was immersed in Evapo-Rust for a 16-hour period. As the block emerged from its bath, it was completely free of oxidation. Harris suggested that heavily oxidized engine blocks should be soaked in Evapo-Rust for 24 hours, pressure washed and then soaked for another eight hours. Since Evapo-Rust is safe for all metals including iron, steel and aluminum, there is no disadvantage to leaving a block or parts in Evapo-Rust for extended durations of time.

Harris’ unintentional discovery led to the development of an effective yet environmentally friendly solution to rust removal. Even when it has reached the end of its service life (at 226g iron/gallon, it is saturated and at the end of life), this water-soluble solution can (in most cases) be simply disposed of down a household drain (check with your local authorities to be certain.) While it might not save lives like Penicillin or find itself stuck to documents and monitors like a Post-It, Evapo-Rust should find its way into the garage of any do-it-yourself enthusiast. 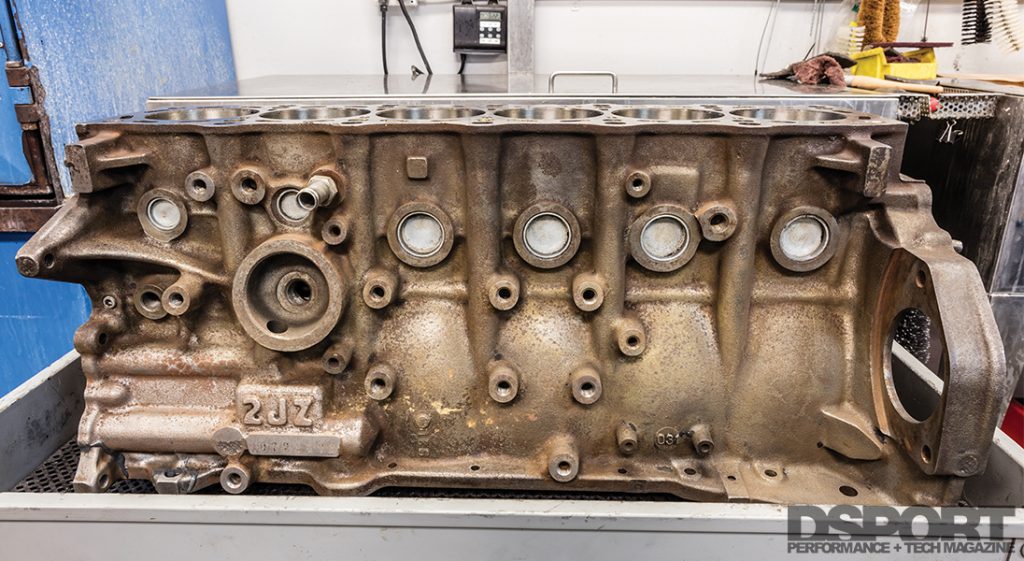 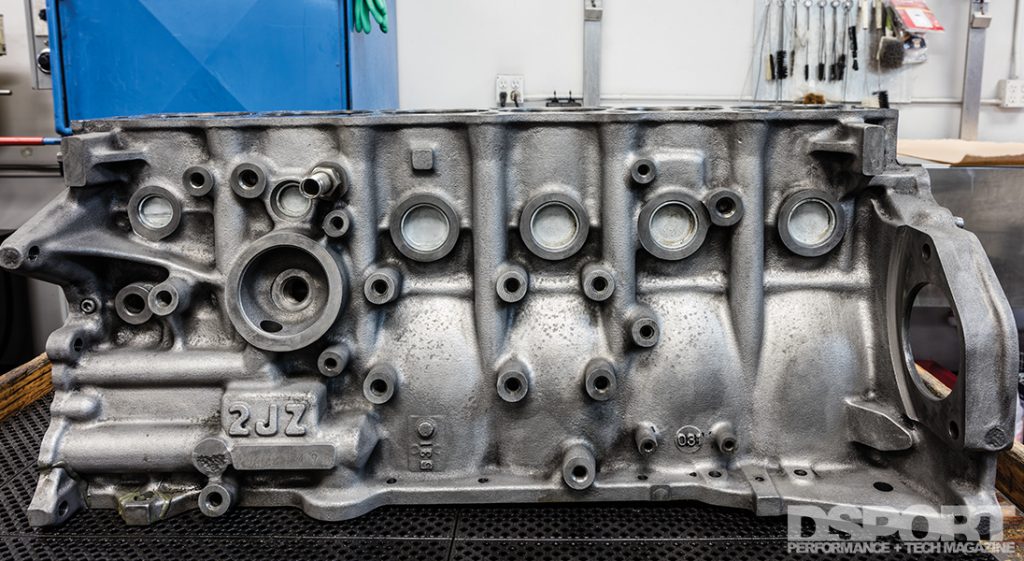 1. Degrease and rinse the engine thoroughly BEFORE dipping any parts in Evapo-Rust. 2. Rinse twice to ensure that all of the degreaser has been removed. 3. If the pistons are rusted into the cylinders, remove the crank, degrease the engine and then soak in Evapo-Rust for a period of 24 hours. Then, using a block of wood and a mallet, tap the pistons out of the block. 4. For short-term storage (up to two weeks), apply a light coat of Evapo-Rust to protect the block from flash oxidation. 5. For long-term storage, apply a coat of oil to protect the block. 6. If you’re planning to paint the block, use Evapo-Rust’s Rust Block. This water-based solution does not leave an oily film and protects for up to a year.